Guatemala: A Dangerous Place To Be a Union Member 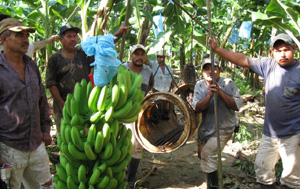 Banana workers from the Guatemalan union SITRABI. Leaders of SITRABI have historically received frequent death threats and have been targets of violence on many occasions.

The Guatemalan labor movement is facing a sharp upsurge in assassinations and violence against trade unionists. Six unionists were murdered in 2009, believably for their union activities.

In October, a union leader was gunned down leaving his workplace. In November, 19 women banana workers organized a demonstration and press conference inside the Guatemalan Ministry of Labor and Social Protection to denounce labor rights violations that affected women workers in particular. They demanded that the Ministry send inspectors to the plantations where they worked. The Ministry, however, fenced off the women inside the building and held them against their will for hours while they photographed and videotaped them.

Earlier this year, the International Trade Union Confederation (ITUC) declared Guatemala the second most dangerous country in Latin America to be a trade unionist, following world leader Colombia. Since the implementation of the Central America Free Trade Agreement (CAFTA) in July 2006 between the U.S., the Dominican Republic, and five Central American countries, violence against union leaders and members has increased drastically in Guatemala. During CAFTA negotiations, murders of trade unionists averaged one every two years. Since CAFTA came into effect, 19 union members in Guatemala have been assassinated.

Some of the workers affected are employed by U.S. companies.

“Fast track” trade agreements like the North American Free Trade Agreement (NAFTA) and CAFTA (and the pending Colombia FTA, see below) have weakened U.S. trade rules that were meant to protect worker rights abroad. In the pre-CAFTA era, when violence against unionists in Guatemala flared in 1999, the U.S. government threatened to suspend U.S. trade benefits, as a way to pressure the Guatemalan government to act. Now, under CAFTA, in the face of a new rash of murders, the U.S. government lacks any effective ability to impose sanctions.

In April 2008, six Guatemalan unions, supported by the AFL-CIO, filed the first CAFTA labor complaint with the U.S. Department of Labor. The complaint uses five case studies that document illegal firings, employers’ failure to bargain in good faith, health and safety violations, and violence against unionists, including the murders of two leaders from the port workers union STEPQ and the banana workers union SITRABI (video). But days before leaving office, the Bush administration extended the review process an additional six months, stating that the Guatemalan government was taking “critical initial steps,” and therefore leaving the Obama administration to rule on the complaint.

The Obama administration’s response to the complaint has been unfavorable, to say the least. Announcing on July 16 that the Guatemalan government was making enough progress, the U.S. agreed to extend the review process an additional period of time. Instead of requesting formal ministerial consultations, as outlined under CAFTA when a country fails to adhere to the agreement’s labor provisions, the U.S. has essentially added new steps by entering into “pre-consultations” with the Guatemalan government. The steps taken thus far by the U.S. government further demonstrate CAFTA’s inability to protect worker rights.

The Guatemalan government’s response to violence and worker rights’ violations has also been minimal. Following the July ruling on the CAFTA labor complaint, the AFL-CIO met with the unions supported in the complaint. The unions reported that the aggressions and violations persisted in nearly all cases. Orders for back pay, reinstatement, and proper security for high-risk union leaders had not yet been fulfilled.

The experiences of the Guatemalan labor movement set a perfect example of how matters could get worse in Colombia if the pending U.S.-Colombia Free Trade Agreement is approved in 2010. The Obama administration has expressed its commitment to pass the agreement. Colombia leads the world in assassinations of trade unionists with more than 2,700 in the last two decades. In 2008, more unionists were murdered in Colombia than in the rest of the world combined, with 49 assassinations. Despite the lack of action on these cases and other serious human rights violations, the U.S. continues to move forward with negotiations with the Colombian government. />

Today, Guatemalan unionists continue to work without respect for their core labor rights and in fear of their lives. The lack of political will from their government to uphold labor laws and human rights allows ongoing violence and impunity for the murderers.

Join the international union movement in condemning the assassination of union leaders and urge the Guatemalan Embassy to stop the violence against those who speak out against injustice!

Lupita Aguila is program coordinator at the U.S. Labor Education in the Americas Project.

Related
We Can't Just Keep Saying 'Pass the PRO Act.' We Have to Organize. »
A New Union, At Last? Mexican Auto Parts Workers Get to Vote, Three Years After Strike Wave »
In a Landslide Victory, Mexican GM Workers Vote In an Independent Union »
Labor Must Rise Against Vaccine Apartheid »
Interview: A Mexican Auto Worker on the Fight for a Real Union at GM's Silao Plant »