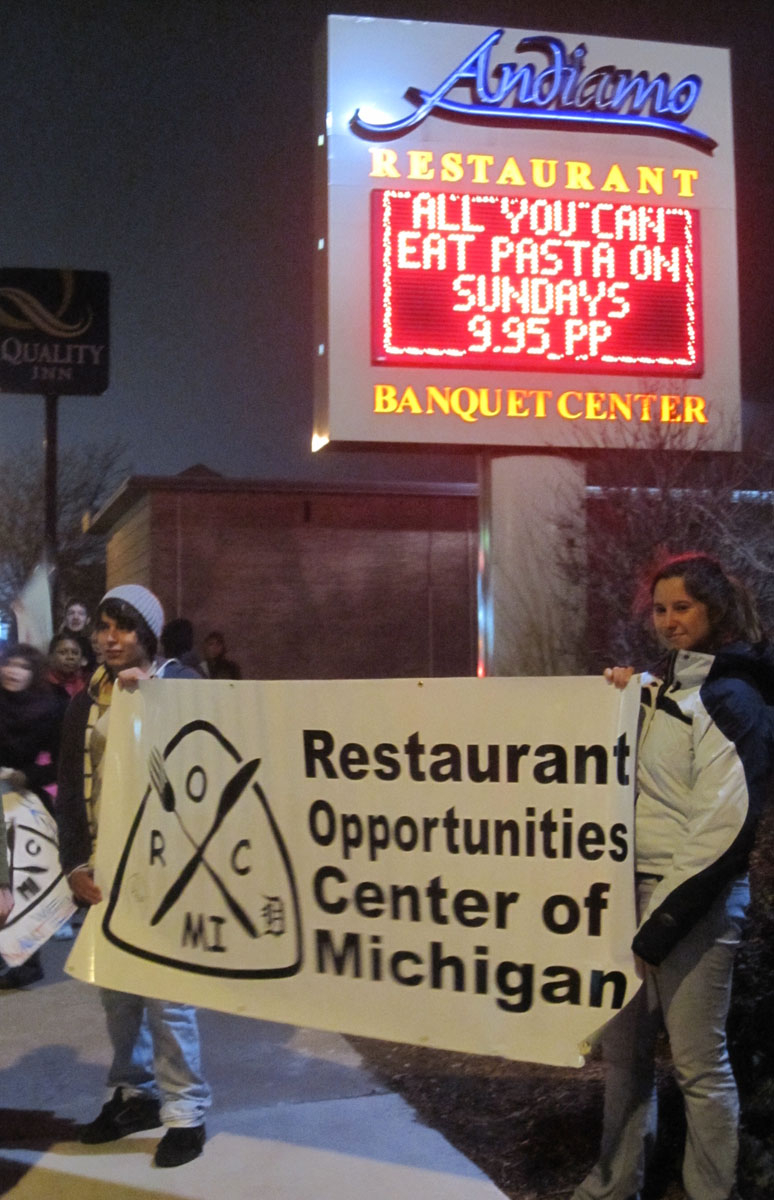 The sidewalk outside a restaurant in suburban Detroit was packed for the Friday night dinner rush as workers and supporters protested a slew of minimum-wage violations.

The sidewalk outside an Andiamo restaurant in suburban Detroit was packed for the Friday night dinner rush—but it wasn’t because the line was out the door. An upbeat crew of about 70 including three employees of the upscale Italian restaurant chain joined community supporters organizing with the Restaurant Opportunities Center of Michigan, one of eight regional affiliates of the national workers center.

ROC was out front protesting a slew of minimum-wage violations, and plans to follow the demonstration with a $125,000 federal claim on behalf of seven workers at the Dearborn location. The restaurant chain owns several fine dining establishments in metro Detroit.

One of the workers involved in Friday’s protest was fired today, and ROC is heading back to confront Andiamo management in Dearborn tomorrow.

Last week’s protest came after a delegation of 100 workers and supporters visited the Dearborn location on November 5. They marched into the kitchen to deliver a letter to management demanding a sit down with a group of servers, bussers, and cooks looking for back pay after complaints of improper wage deductions and unpaid overtime. The workers—who are Latino, white, black, and Middle Eastern—also say Andiamo is practicing discrimination in job assignments on the basis of race, gender, and national origin.

Andiamo ignored the letter for two weeks and ROC escalated, launching the raucous Friday march that elicited a high honk rate from passing cars—and succeeded in turning away a few other potential customers. Patrons returning to their cars were surprised to hear that their meal had been cooked and served by underpaid employees.

The loud crowd did not go unnoticed by a group of nervous managers, who milled about among the valet drivers at the foot of the restaurant’s red carpet entrance. Andiamo’s big digital screen flashed “buy one get one free” specials onto Michigan Avenue, hoping to entice new customers despite the dire economic climate.

In a misstep that emboldened the protestors, the restaurant manager charged angrily onto the (public) sidewalk demanding that ROC get off his property. He retreated, and as he left the cheering crowd, he was heard telling one of his loyal employees to “get pictures of their faces.”

The Dearborn confrontation was part of a national day of action against wage theft that saw protests in 26 cities, organized by Jobs with Justice and the Interfaith Worker Justice network of worker centers. IWJ estimates that billions in wages are stolen from workers every year, and a recent study by the National Employment Law Project in Chicago, Los Angeles, and New York City found that low-wage workers had an average of $51 stolen from weekly earnings of $399—totaling 15 percent of a worker’s pay.

IWJ’s director, Kim Bobo, points out this theft is occurring in places where employers stand a chance of receiving a visit from state labor department inspectors—just imagine what it’s like where less scrutiny exists.

Read more about the Restaurant Opportunities Center, which has grown around the country from its base in New York City, at its website.