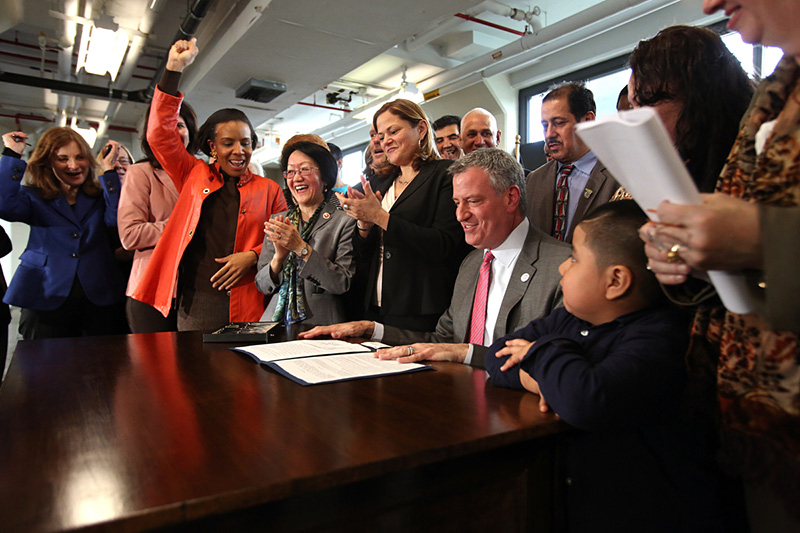 New York City workers can start using paid sick leave today, under a law passed in March with meager publicity. The city council had passed a substantially weaker law last year, but a new council leadership and mayor remade the law, eliminating most of the bad elements. As a result, around 1.2 million workers are gaining paid sick leave.

Other big cities and Connecticut have created paid sick leave, but New York’s revamped law is one of the strongest: an employer must provide one hour of paid sick leave for every 30 hours worked, up to 40 hours a year. Workers can take the time to care for themselves or family members, including a grandchild, grandparent, or sibling.

The only exception: if your employer has fewer than five employees, there’s no paid leave requirement, but you still have a right to take unpaid leave, accruing at the same rate. Domestic workers, usually the sole employee, will nonetheless get two days paid, and the rest unpaid.

In contrast, Connecticut’s 2013 law exempts manufacturing jobs, temps, day laborers, and nonprofit workers, and applies only to employers of more than 50. Washington, D.C.’s 2008 law excluded tipped workers. Seattle is phasing in small and medium-sized employers (under 250 workers) over two years and workers have to work for six months before they’re eligible. Portland’s 2013 law is very similar to New York’s. City councils in San Diego and Eugene, Oregon, just passed laws too.

There is no national law on sick pay. Forty million people in the U.S. work in jobs with no paid sick days at all, including around 40 percent of the private sector workforce. The Family and Medical Leave Act provides unpaid leave, but only for longer periods, and exceptions leave half the workforce uncovered.

The law went into effect April 1, but workers have to accrue leave for four months before they can use it. Ads have gone up in the subway announcing “Employees Can Use Sick Leave Starting July 30.” Oddly, the ads don’t mention that it’s paid until the fine print. Employers are supposed to inform workers, but compliance is spotty.

“They never even told us about that,” said retail worker Sharlene Santos, who’s working with the Retail Action Project on fair scheduling at her employer, clothing store Zara. “If it weren’t for RAP, I wouldn’t even know about it.” RAP is a project of the Retail Union, RWDSU.

“They posted about it in the break room,” said Iris Velasquez, another Manhattan retail worker. Still, she said a lot of her co-workers don’t realize the law exists. “It’s kind of under the rug.”

New York City restaurant and retail workers conducted an intense campaign for three years for paid sick leave, winning the support of a city council majority. But the bill was blocked by the powerful Speaker Christine Quinn, who also hoped to become mayor.

“Imagine you are a server at a restaurant making $5 per hour. You are scheduled to work on Monday afternoon, but you wake up with a bad fever, so you decide to take a paid sick day.

“A few days later, a co-worker calls you and asks if you would be willing to take her evening shift. You jump on the opportunity because you are a low-wage worker struggling to make ends meet, and it is your right to pick up extra shifts, as long as your boss approves.

“But because of the shift-swapping provision in the paid sick days bill, since you have picked up the extra shift, the sick day you took on Monday will no longer be paid.”

Under withering criticism from labor and her mayoral opponents, Quinn finally allowed a bill to pass in March 2013, but it was so riddled with exceptions that some worker organizations denounced it. Manufacturing workers were excluded (there are 75,000 in the city), as were employers with fewer than 15 workers, and the whole thing could have been delayed if the economy went south.

Quinn lost the mayor’s race to Bill de Blasio, who promised to beef up the law. Sure enough, this March he and new Speaker Melissa Mark-Viverito shepherded a stronger bill through the council, although the improvements went unremarked in the media.

The new law does retain a nasty loophole. Restaurant workers were disgusted that a “shift-swapping” provision allows employers to take back sick pay if a worker picks up an additional shift later in the pay period (see box). It’s not clear whether other shift employers, besides restaurants, will try to use this loophole.

“We would never pass a law requiring sick lawyers to work on Saturdays instead of being paid for a sick day,” said Rahul Saksena of the Restaurant Opportunities Center of New York at a hearing in February. ROC estimates 90 percent of the 200,000 restaurant workers in New York City had no paid sick leave before this legislation.