Bissell Tries Sucking the Life Out of Union Organizing Drive 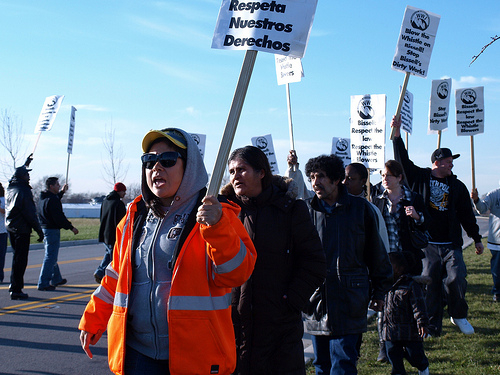 After 70 workers at a Chicago-area warehouse were fired for trying to organize with the United Electrical Workers, they came back to picket, letting management know they intend to get their jobs back, along with the union of their choice. Photo: UE.

Forty warehouse workers and their supporters picketed Wednesday in front of the Bissell distribution center in Joliet, Illinois, one of dozens of mammoth buildings that have sprung up off of I-55 south of Chicago. One week earlier Bissell—through their temp agency—dropped the axe on all 70 workers in the warehouse. Their offense? Trying to form a union.

On October 29 workers in the Bissell warehouse informed their bosses that they had joined up with the scrappy United Electrical workers—famous for last year’s occupation of Republic Windows and Doors. One week later they were out on the street.

Now they were back in the street to let Bissell know they aren’t slinking off into the night and intend to get their jobs back, along with the union of their choice.

Republic sit-downers Ricky Maclin and Armando Robles were on hand to show support and solidarity, as several workers from the warehouse detailed poor wages and months of management abuse.

Workers explained how they have seen the piece rates for unloading a container cut from $45 to as low as $15, for work that could take up to five hours to complete. Pay this low puts the company in violation of state and federal minimum wage laws, not to mention the potential hot water the union says the employer, Roadlink, faces from state investigators for operating as an unlicensed temp firm.

LINK IN THE CHAIN

The 500,000-square foot Bissell warehouse opened in January. As Labor Notes described in our popular pamphlet The Cargo Chain, the men and women working in facilities like this are the hidden local face of globalization, part of an ever-expanding network of ship hands, longshore workers, truck drivers, and railroad operators who move goods from far-flung factories to the shelves of neighborhood retailers.

Parts arrive to warehouses in this massive complex off of rail cars and leave in tractor trailers, bound for retail stores across the region. State and local governments have poured millions into developing these interlocking rail yards, warehouses, and highway systems. When it’s fully operational, the Joliet complex will be the third-largest inland port in the world.

SQUEEZING MONEY OUT OF WORKERS

But while the names on the warehouses—Wal-Mart, Sanyo, Georgia Pacific—all rank in the Fortune 500, the industry is set up to put as much distance as possible between the marquee names and the workers who keep their goods moving in and out.

This same sort of bait and switch is happening to everyone from janitors to flight attendants, but the logistics industry has been a pioneer. In Joliet, Bissell outsourced warehouse operations to the logistics arm of AP Moller-Maersk, the biggest shipper on the planet. But workers are hired—and in this case fired—by Roadlink, a temp agency employed by Maersk.

This legal firewall keeps workers isolated and vulnerable, and ultimately makes them easily replaceable when they start organizing for better pay and benefits.

While it might be a fine formula for Bissell, it’s a dead end for Joliet’s community, Will County, where the foreclosure rate is the highest in the state—no surprise given the spread of low-paid work in the warehouses mushrooming across the area.

Workers at Bissell took the first step towards turning this situation around, but they intend to go far beyond the four walls of their own building. As part of the Warehouse Workers for Justice, a project spearheaded by the United Electrical Workers, they are trying to reverse decades of stagnant wages and flagging benefits and bring union protections to workers in the transportation, warehousing, and logistic industries across the Chicago region. Sitting at the crossroads for so much of the nation’s cargo traffic, these workers have leverage. And if the Bissell workers are any indication, they also have will power.

The threads connecting these warehouse workers to the broader economy show us a small piece of the insane web that Wall Street has weaved in the last generation.

Their employer, Roadlink, is actually owned by a private equity firm, Fenway Partners. While Fenway touts the “synergies” between their “strategic” investments, their holdings are actually an assemblage of everything from 1-800-Contacts, the mail-order contact lens company, to ArtCarved and Balfour, who sold you your class ring in high school, to Targus, the low-end supplier of laptop bags and carrying cases.
Just figuring out who the actual boss is can be a headache these days. Figuring out how to go after financial firms that treat the economy like an all-you-can-eat buffet, that’s the real test.

Mark Brenner is the former director of Labor Notes and is currently an instructor at the University of Oregon's Labor Education & Research Center.
Related
Interview: 'Things Shouldn't Be Like This': Why One Amazon Driver Walked Out on Easter »
If the PRO Act Were Law, The Amazon Union Election Would Have Looked Very Different »
Dispatch from Alabama: The Biggest Amazon Union Drive Yet »
Surveillance, Stress, and No Bathrooms: Life as an Amazon Driver »
BAmazon Union: Anticipating the Battle in Bessemer, Alabama »