Good images of powerful strikes, marches, and rallies help us reach a larger audience through the press and social media. Photo courtesy of Look Loud

Have you ever been part of a truly great rally—but realized afterwards that there were no good photos to show your friends? Have you heard about a powerful strike or march, but struggled to find any photographic evidence?

We take action to show our power and unity to the boss, the public, and our co-workers—including the ones who didn’t show up to the action. Images help us reach a larger audience, through the press and social media.

But not every great event generates great images. Here are a couple tips to organize a rally that makes members feel great and look great on camera.

REACH THROUGH THE CAMERA

One simple and effective thing a rally organizer can do is have someone get on the microphone and say:

"Some of our people can’t be here today. They’re stuck at home, or stuck at work. Or maybe they’re still afraid to join us—they’re not sure yet whether we’re strong enough together to stand up to the power of the boss. They’re feeling isolated and alone. But they’re watching us through the news and social media.

“So I need us all to make some noise for them too. And I need you to reach through the cameras and tell everyone out there watching that we see you, we didn’t forget you. You’re part of this, and we have your back.”

Simply reading that script can change how people relate to the camera. It helps us feel empowered by cameras, and also helps people relax and have more fun.

Make sure you have a designated photographer or two who can carry this forward. Ask them to take photos throughout the action. You want photos of people cheering, chanting, rallying, listening, marching… rather than a staged photo-op of people smiling at the camera.

STAGING TO INCLUDE ALL

Another way to magnify the feeling of power and unity is to plan where people stand in relation to each other. Let’s look at two examples: 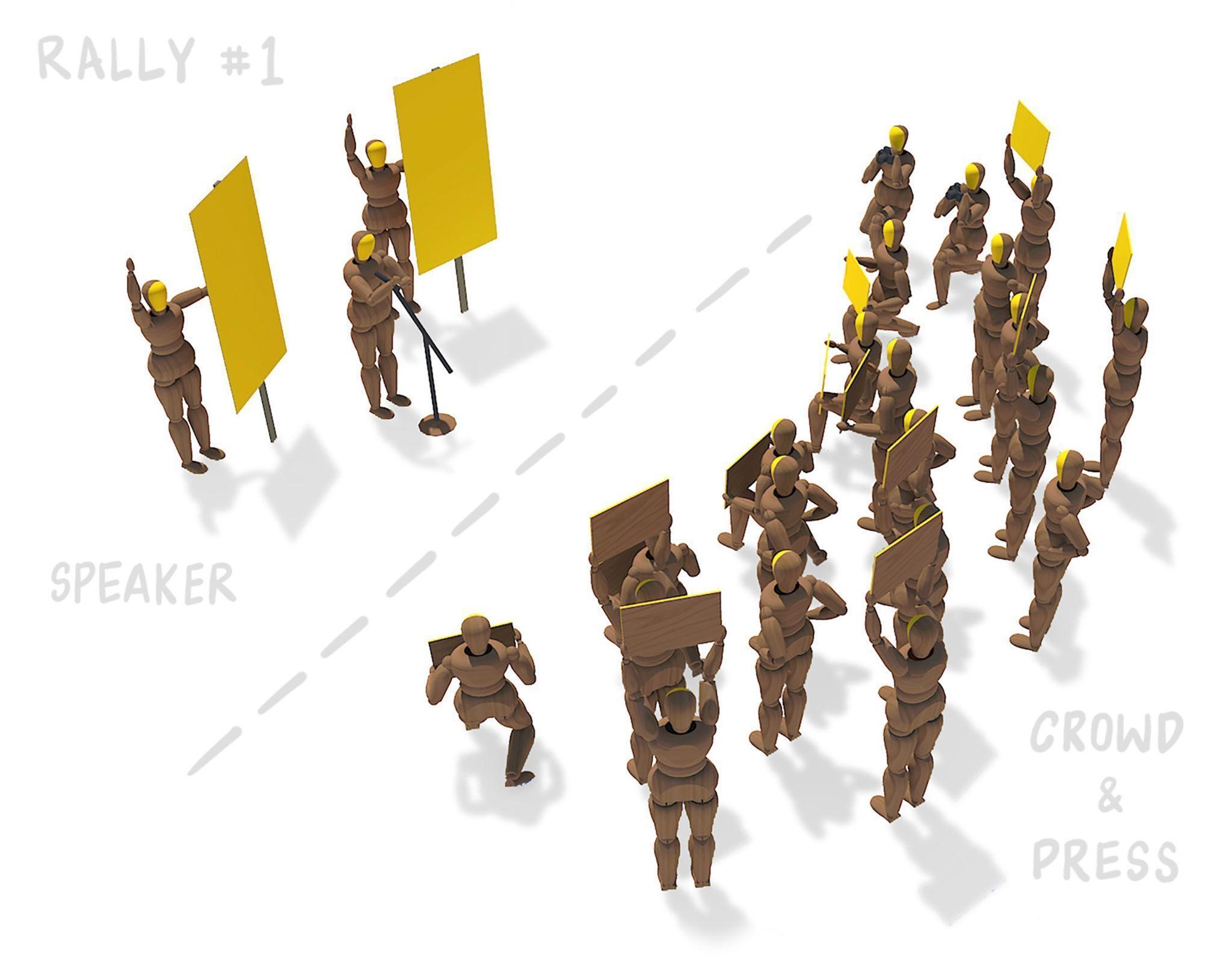 This setup is easy and familiar. If attendees are undecided, they can passively watch without being seen as a supporter. People on the microphone feel important because they have an audience. This setup works well with stages and sound systems, and elevates celebrity speakers above the rest of the crowd. 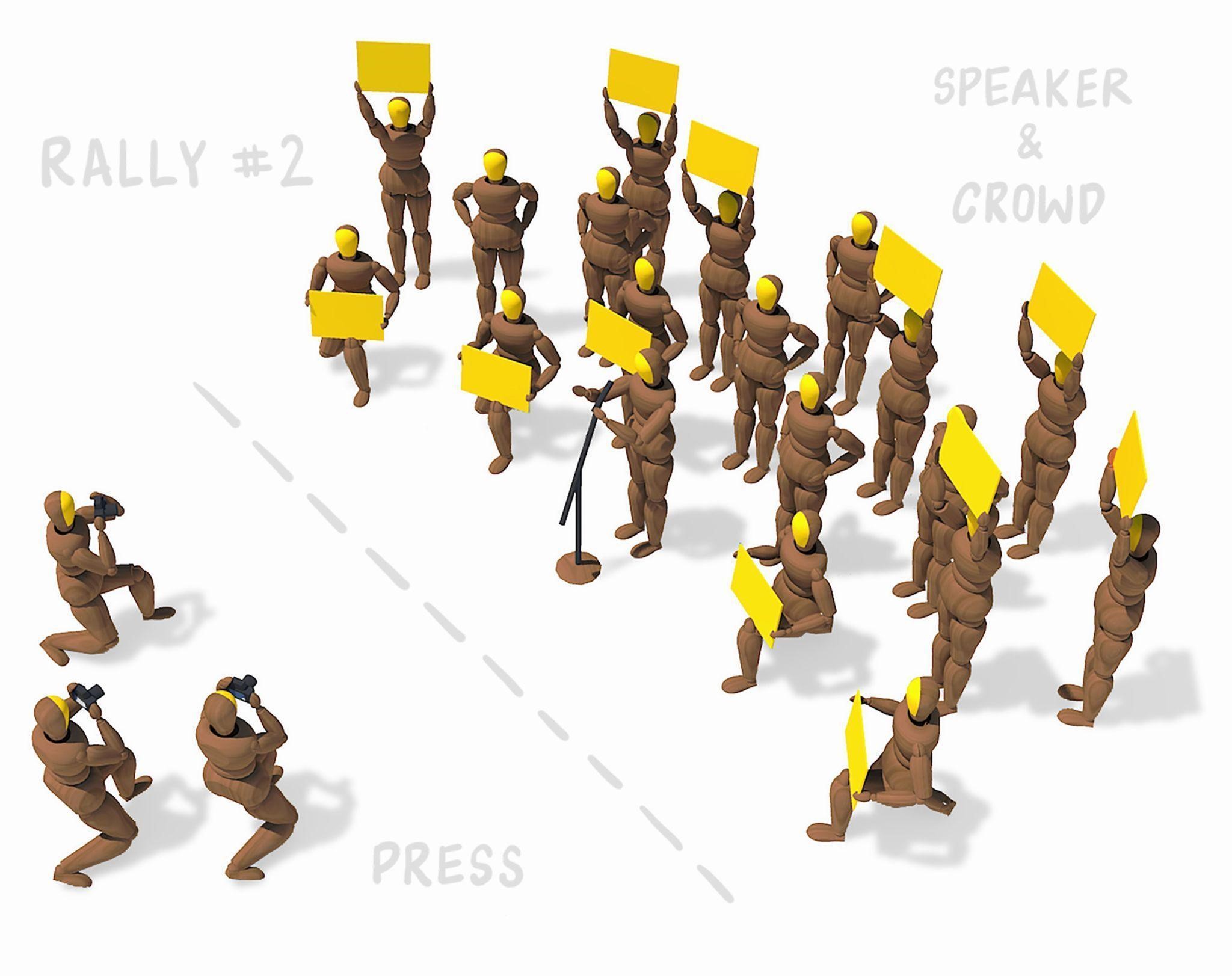 But this formation has a big shortcoming: it’s disempowering. Members feel, and look, passive.

Rally #2: In this rally, the crowd is standing behind the speaker, sending a message of unity. Everyone has an important role; it matters that you showed up. People feel more powerful during the event and afterwards. This position visually conveys the message that our power comes from numbers.

Below are examples of the best images we can get from each event:

Compare the two images, and imagine they appeared in the news afterwards. Which one will make members feel like they were an important part of the event? Which one shows higher attendance?

Placing the crowd behind the speaker (rally #2) will consistently make your rally appear more powerful in photos taken by the press—no matter what the accompanying article says.

Sometimes making this change will feel awkward or unnatural at first—and that’s normal. But giving the speech from tip #1 at the top of the rally can help make rally tip #2 go smoothly. You’ll also want to assign some greeters to welcome new people and help them find a place to stand. In our experience, once they’re behind the speaker, people intuitively understand why they’re there.

Many labor rallies will try to split the difference by placing a small portion of the crowd behind the speaker—but we don’t recommend this. Be careful about dividing your audience. It reduces attendance on camera, and can emphasize the divide between the podium and the audience. It also means everyone is facing inward, instead of reaching out to the world.

It’s a good idea to introduce these ideas in the rally planning process, so that everyone who is playing a role understands the goal. It’s not just about getting good photos; it’s about having a powerful, unified action. Getting comfortable with reaching out to the outside world is one of the most consistent ways to feel and look powerful in public space. It connects us to a larger movement and helps us reach through the media to talk to our people.

Want to learn more? Building on these tips, Labor Notes will be hosting a training on What is Visual Strategy? Projecting Power in the Streets on February 10 at 7 p.m. Eastern. Get details and sign up at the link.

Josh Yoder and Rachel Schragis are the co-founders of Look Loud, which develops action art, tactics, and cultural strategy for social movements to speak precisely and powerfully to the public. Email inbox[at]lookloud[dot]org to explore working together, or follow @Look_loud on Instagram for more best practices and tips.

A version of this article appeared in Labor Notes #515. Don't miss an issue, subscribe today.
Related
Viewpoints: How Academic Workers’ Leverage Can Grow in a Long-Haul Strike »
Every Union Contract Right Now Should Be the Best Ever »
Could We See a Rail Strike? »
Undaunted by Fines, Massachusetts Teachers Defy Strike Ban »
Ahead of Halloween, Sysco Teamsters Give Corporate Ghouls the Heebie-Jeebies »