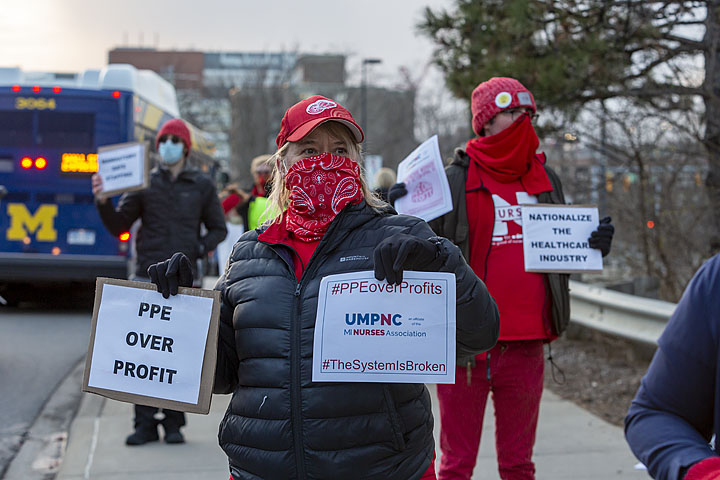 Nurse union activists in Ann Arbor, Michigan, joined with nurse unions in four other states to organize actions at hospitals across the country yesterday, in a national day of action to draw attention to how the U.S.’s profit-driven health care system is failing workers and patients alike. Photo: Jim West/jimwestphoto.com

Nurse union activists organized actions at hospitals across the country yesterday, a national day of action to draw attention to how the U.S.’s profit-driven health care system is failing workers and patients alike.

The actions were coordinated through a series of calls organized by Labor Notes—which has been helping grow a network of rank-and-file nurse activists for more than a year—and were inspired by the protests organized at New York City hospitals in previous weeks.

Nurses and other frontline health care workers used the actions to highlight the disgraceful conditions in many hospitals, where medical staff are struggling to handle the surge of COVID-19 patients with diminishing supplies of respirators, ventilators, and gowns.

Last week activists published a series of demands that included:

Health care workers highlighted how the relentless focus on cutting costs by eliminating any spare capacity left our system incredibly vulnerable to the coronavirus. The solution, they said, is to replace it with one that prioritizes patients over profits.

Here are reports from participants in five locations around the country. —Chris Brooks 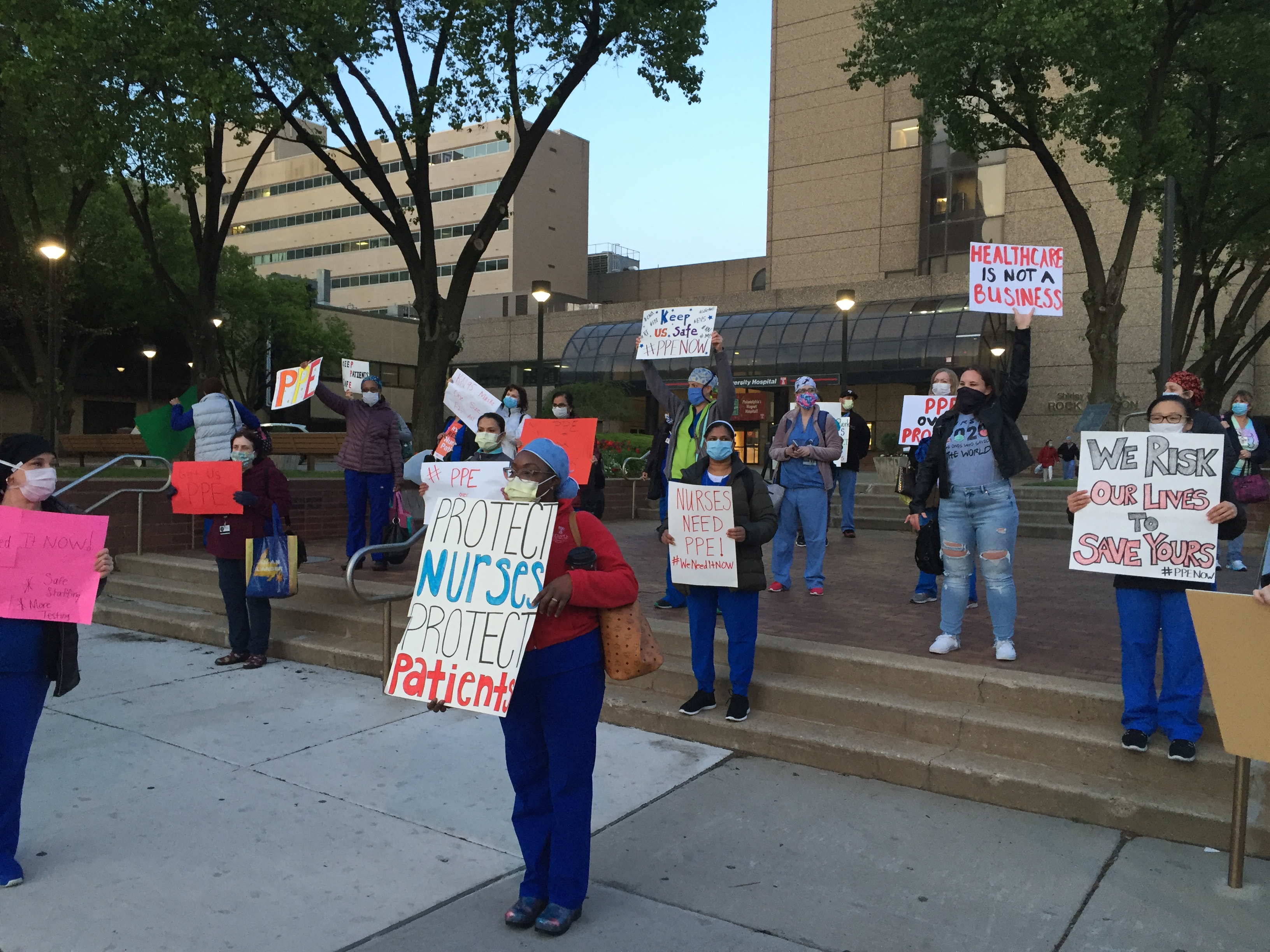 More than 100 nurses rallied in front of Temple University Hospital in Philadelphia. Photo: PASNAP Click here for a photo gallery of nurse actions from around the country yesterday.

In eight locations in Philadelphia and its suburbs, health care workers stood outside their hospitals and once again demanded the tools they need to take care of patients safely.

In the largest protest, more than 100 nurses, members of the Pennsylvania Association of Staff Nurses and Allied Professionals (PASNAP), rallied in front of Temple University Hospital.

The day was invigorating, with nurses speaking directly to those in power. A reporter who came to Crozer Hospital immediately went to the Philadelphia mayor’s daily press conference and demanded answers. (Click here for a video.)

Temple Allied Professionals produced this video with testimonials about working without proper PPE:

PASNAP was proud to stand with nurses all over the country today!

A line of 20 registered nurses with National Nurses United stood six feet apart in front of John H. Stroger Hospital, Chicago’s largest safety-net hospital, during the evening shift change. They held signs that read, “#PPEnotProfit,” “Health Care Workers’ Lives Matter,” “#Safe Staffing NOW!”, “Who Will Be There If We Are Gone?”, “I’m not a hero, I want to live,” #TheSystemIsBroken.” Cars driving by honked loud support. 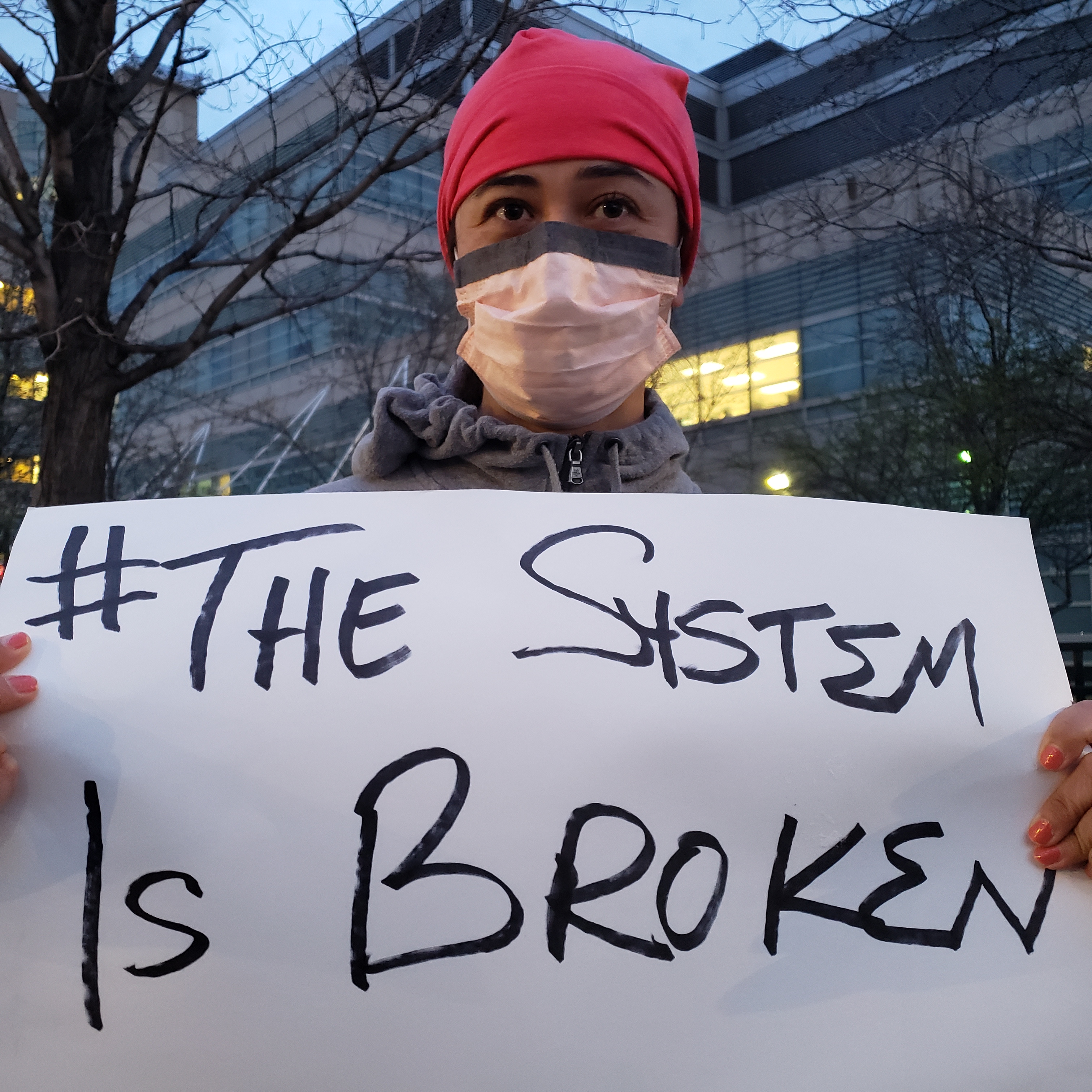 One Emergency Room nurse spoke angrily about hospital management telling her she needed to use each N-95 mask for up to 45 days. Just a couple of months ago, Stroger nurses were using each N-95 for only one shift. Others said they had been told to place each N-95 in a paper bag to reuse it, with the potential of contamination for themselves, co-workers, and patients.

Conseulo Vargas, chief steward, said, “The federal government has failed. If we’re supposed to be equal across this whole country, why is it that the states have to fight for PPE? An N-95 used to cost 70 cents, now it costs $4? People are dying and lives have been lost and more will continue to be lost.”

Dennis Kosuth spoke out against the decision of the Cook County Health and Hospital System (part of the public health system which runs Stroger Hospital) to shut down the ER where he works at Provident Hospital, in a largely Black neighborhood.

More than 50 health care workers and supporters held a socially distanced rally in front of Kingsbrook Jewish Medical Center. Nurses and other workers held signs about their growing number of co-workers who have died and the still-urgent lack of PPE. Signs read “I can’t help anyone if I become a patient,” “Essential workers’ lives aren’t disposable,” and “My patient deserves a nurse with proper PPE.” They were joined by a couple dozen supporters, including nurses from other hospitals across New York City, members of the Democratic Socialists (DSA), and activists from other unions. 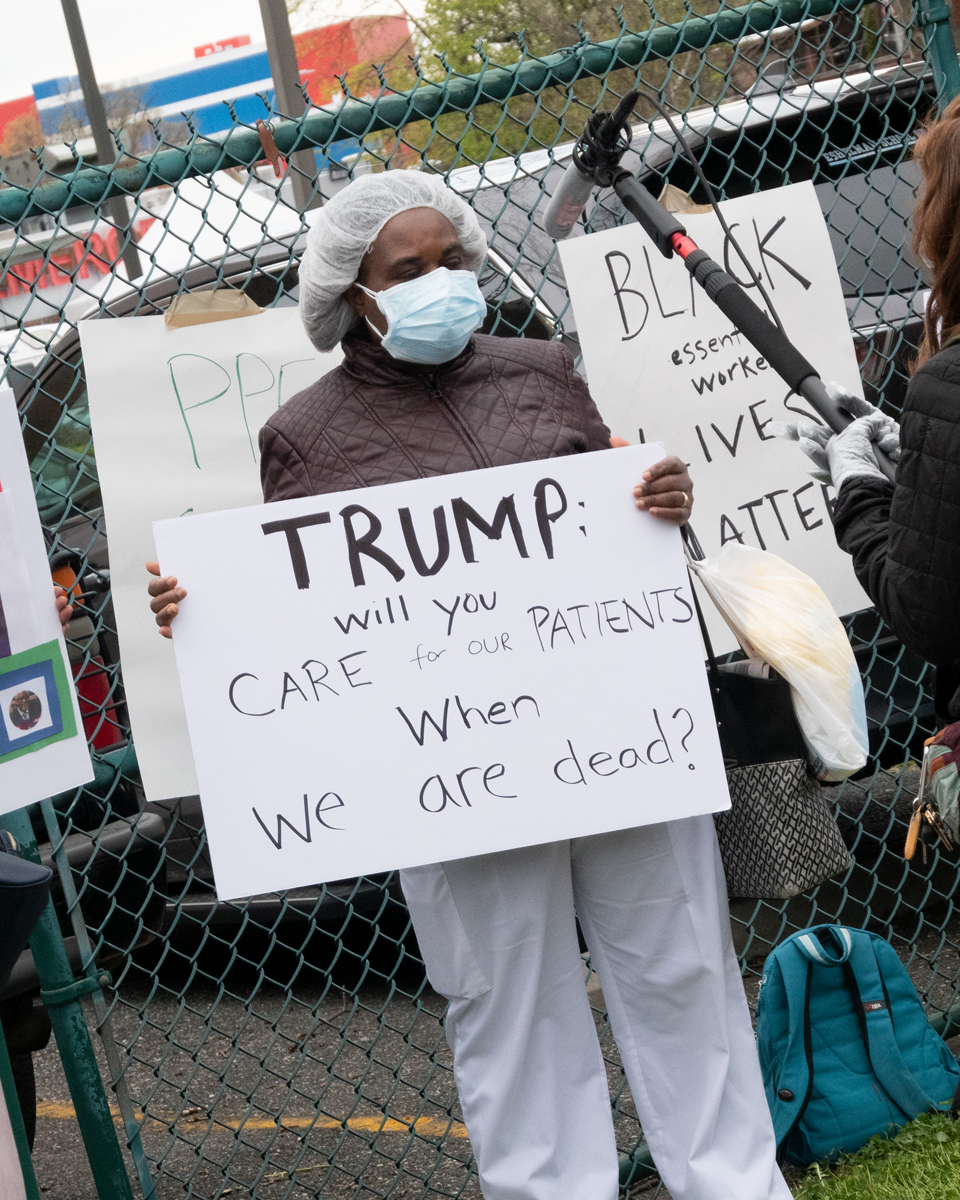 More than 50 health care workers and supporters rallied in front of Kingsbrook Jewish Medical Center in Brooklyn. Photo: Chris Maggio Click here for a photo gallery of nurse actions from around the country yesterday.

Although nurses’ earlier protests had forced New York Governor Andrew Cuomo to decree days ago that nurses could have a new N-95 mask each day rather than reusing it for days on end, Kingsbrook workers continued to raise the alarm that even one mask and gown per day was not safe. Arlene Meertens, a patient care technician, said, “We know that better can be done. But when? How long? How many more have to die?”

Multiple nurses gave speeches describing the lengths they were going to try to safely conserve their one gown per day, including spraying down the paper-thin gowns with Lysol from home and wearing garbage bags as protection. Many expressed their fear about going to work and wondering if they would be the next one to needlessly die.

Nurses from around the city pointed out that this is not an issue at individual hospitals, it is widespread and systemic in the New York City system that has already been cut to the bone.

Our chapter of Service Employees Local 1021 includes nurses, ancillary health workers, and many other classifications who make the public hospital system in Alameda County run. 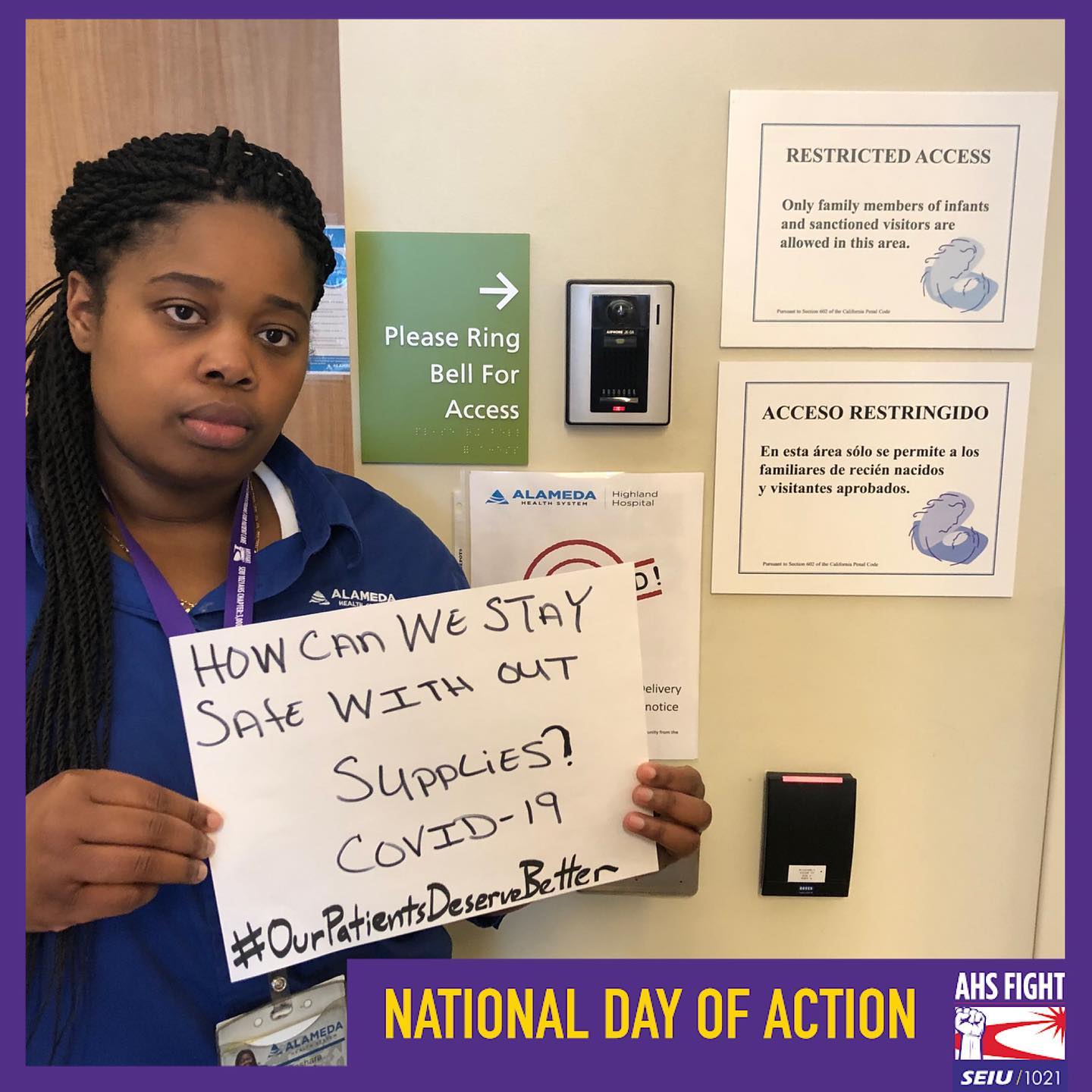 Bay Area health care workers did a selfie campaign inside their hospitals. Photo: SEIU Local 1021. Click here for a photo gallery of nurse actions from around the country yesterday.

In the lead-up to the day of action, we started a social media selfie campaign where we take photos of ourselves holding signs about our working conditions, to show the connection between the needs of our patients and the conditions we work in.

To kick off the campaign, a few member-leaders went to different campuses and asked workers there what they were most concerned about. They helped the members make signs that shared their real stories, like “We brought in our own hand soap because we don’t have soap dispensers” or “We could work from home but our bosses won’t let us.” Then we took photos of the members with their signs. We made the rounds again on the day of action, drumming up more selfies.

We post the photos to our member-run Facebook and Instagram pages. We got help from our local DSA chapter making frames. We regularly remind members to post selfies; in-person conversations are still the most effective way.

Nurses at the University of Michigan Hospital were bolstered by a caravan of dozens of cars, signs in windows and horns honking, that repeatedly circled by their sidewalk protest during shift change. Nurses’ signs read, “PPE over Profit” and “Hail to the Front Lines,” a reference to U of M’s “Hail to the Victors” fight song. Supporters’ signs read “The System Is Broken,” “Medicare for All,” and “Teachers Support Nurses.” 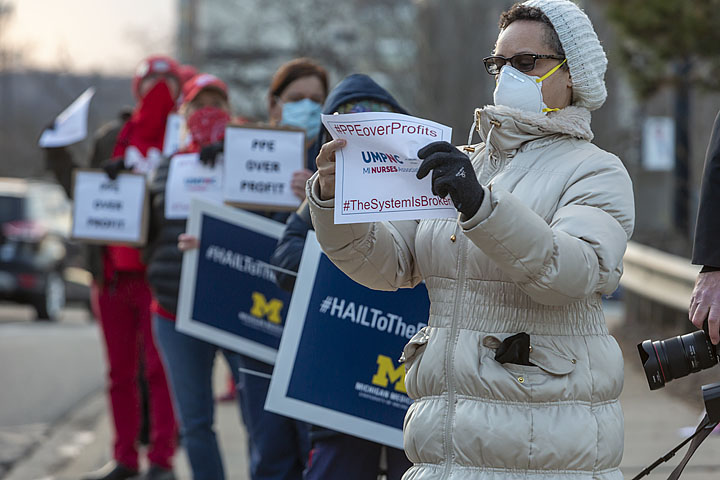 Nurses at the University of Michigan Hospital were bolstered by a caravan of dozens of honking cars circling their sidewalk protest during shift change. Photo: Jim West/jimwestphoto.com Click here for a photo gallery of nurse actions from around the country yesterday.

The rank-and-file teacher coalition MI-CORE was one of the groups to back the nurses, along with a graduate workers’ union (GEO), Ann Arbor teachers, DSA, and the local labor federation.

Nurse Anne Jackson, who works with pediatric patients, said she spends much time these days negotiating with insurance companies over coverage for drugs that are in short supply because of the coronavirus crisis. “Nine thousand health care workers have gotten sick,” Jackson said. “That means we’re doing something wrong, because if you use best practices you don’t catch what the patient has. In a pandemic we should be using a ridiculous amount of PPE.

“The reason is they didn’t get prepared, from 2009. They didn’t restock from the H1N1 epidemic. A lot of what we had was broken, or rotted, not useful. We are seeing that a just-in-time supply chain and a profit-driven system just don’t work in a pandemic.”

(See Jackson and others in a live video from the event, by the Detroit Free Press.)