VIDEO: Don't Die for Wall Street: Essential Workers on Why Everyone Else Should Stay Home 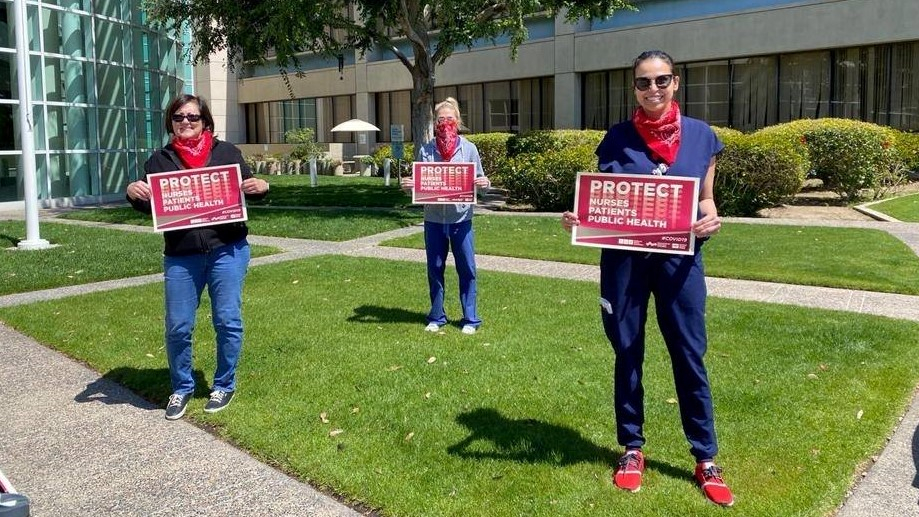 Labor Notes’ “Don’t Die for Wall Street” webinar took place on a day when more workers, whether unionized or not, were taking matters into their own hands. Monday General Electric workers walked out to demand their plants make ventilators, and Amazon workers in New York protested outside the massive warehouse that employs 5,000 people and which workers said was a breeding ground for COVID-19. Instacart workers went on strike and Whole Foods workers are striking today.

More than 650 people attended the webinar to hear from essential workers in health care, transit, and grocery. Facilitator Samantha Winslow of Labor Notes noted that many people are under incredible pressure to continue to work despite shutdown orders, because of their financial situation or pressure from their employers. Thirty percent of white workers can work from home, but only 15 percent of Latino and 20 percent of Black workers are able to.

Two nurses who work at hospitals that serve poor people spoke about how the pandemic is worse, if possible, there. Michelle Gonzalez, an RN at Montefiore Medical Center in the Bronx and a member of the New York State Nurses Association, is fighting for more protection, staffing, and equipment. Management has been misleading the public, insisting in February that they had enough Personal Protective Equipment (PPE) and then when supplies had dwindled, telling workers that they didn’t need an N-95 mask to be safe. By March, Gonzalez was being told to reuse single-use N-95 masks.

Workers are demanding their hospital follow Occupational Safety and Health Administration (OSHA) standards instead of the weakened Centers for Disease Control (CDC) ones. The Bronx is one of the least healthy counties in the state, and Gonzalez said she knows that “if we’re not protected, we can’t protect our families and communities.”

Health care workers at Chicago’s Cook County Hospital are staging mini-sit downs, telling management to “come find me in the break room when you have PPE.” Elizabeth Lalasz, a nurse and steward for National Nurses United (NNU), says her hospital is the busiest in the state and serves the most at-risk population for COVID: those who don’t have adequate health care to begin with.

Workers are demanding N-95 masks, gowns, and face shields, although Lalasz admits this is still minimal compared to the PPE that workers in Italy and Wuhan, China, have. Her union organized a socially distanced protest and is working to source masks.

NNU is demanding mass testing to slow community spread, more Intensive Care Unit beds, and an end to Immigration and Customs Enforcement raids, so that undocumented people can safely access health care. They are also fighting to re-open hospitals that were closed because of the for-profit health care system’s lean production model and to release prisoners from the Cook County Jail, which has experienced an explosion of coronavirus.

Detroit bus drivers won critical workplace safety protections by refusing to work March 17. Glenn Tolbert, president of Amalgamated Transit Union Local 26, says drivers now have gloves, sanitizer, and masks. Fares have been waived and passengers board through the back of the bus and maintain 10 feet of distance from the driver. Buses are cleaned nightly and the cleaning crew has quadrupled.

The Big Three auto companies should be re-opening factories only to produce ventilators and PPE, not autos, said Travis Watkins of Auto Workers (UAW) Local 167. When auto workers return to work in those plants, free mandatory testing, temperature checks upon entering, and social distancing will be essential.

This webinar focused on essential workers, who agreed that non-essential businesses need to be shut down! Carl Rosen, president of the United Electrical Workers (UE), said wildcat strikes, union and not, have been triggered across the country when workers find out that management didn’t tell them someone in their facility tested positive for the virus. Rosen urged manufacturing and construction unions to shut down their workplaces: public safety is more important than building luxury condos. He noted that it’s easy to get press coverage for such an action. Organize your co-workers, send out a press release, and walk out!

Tonight Labor Notes is co-hosting a webinar on organizing without a union during the coronavirus crisis, with speakers from the Food Chain Workers Alliance and Pioneer Valley Workers Center.

We want to help! Find our Resources for Organizing in a Pandemic page here: labornotes.org/coronavirus.

Trying to figure out how to get your co-workers together? Contact us at organize[at]labornotes[dot]org.

Katie Ferrari is a journalist, teacher, and member of the Oakland Education Association.

Related
How Postal Workers Saved the Election »
Will Urgent Care Doctors Be Forced to Strike in a Pandemic for the Right to Go Home? »
While the World Focused on Midwest Election Results, Detroit Bikeshare Workers Won Their Union »
Viewpoint: This Election Shows Labor's Ground Game Matters (Especially During a Pandemic) »
With City's Economic Future in Doubt, Can New York Unions Stop the Cuts? »
VIDEO: Don't Die for Wall Street: Essential Workers on Why Everyone Else Should Stay Home Labor Notes’ “Don’t Die for Wall Street” webinar took place on a day when more workers, whether unionized or not, were taking matters into their own hands. Monday General Electric workers walked out to demand their plants make ventilators, and Amazon workers in New York protested outside the massive warehouse that employs 5,000 people and which workers said was a breeding ground for COVID-19....