Connecticut Hotel Workers Do Their Own Organizing and Beat the Boss 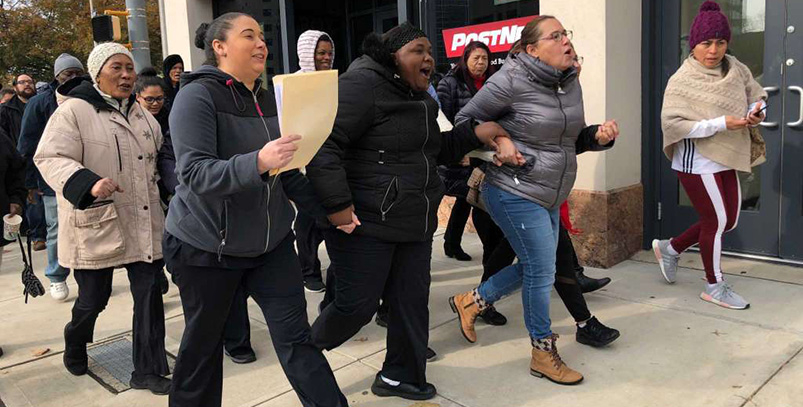 One union’s member-centered model prepared it for a fierce anti-union campaign that would have broken many others.

UNITE HERE Local 217, which represents 3,000 workers in hotels and university cafeterias, has been on an organizing sweep through southern Connecticut, winning union elections at the Hyatt in Greenwich in 2015 and the Hilton in Stamford in 2017. Building off that momentum, workers at the nearby Stamford Sheraton began to organize.

Unlike many unions, Local 217 has put its recently organized workers in the driver’s seat for new organizing campaigns. That made all the difference when bosses turned up the heat.

Workers at the Stamford Sheraton were angry about low pay, hours being cut, and operating at the whims of managers and consultants.

Joe Hutchins was making just $13 an hour when he started as a front desk agent at the Sheraton, in what he points out is “one of the wealthiest and most expensive areas to live on the East Coast.”

Many of the workers had been reasonably satisfied with their working conditions until management embarked on a cost-cutting campaign. Positions were cut and work piled onto the remaining workers. For example, the Sheraton eliminated the evening barista in the hotel’s café; front desk agents were expected to perform double duty, without any training.

At the same time, hours were cut across departments, and workers’ insurance plans were changed to ones that were much harder to use. Workers had to travel to other towns, or all the way to New York City, to use their insurance.

Local 217’s unique model helped. In most other unions, organizing drives are typically run by teams of professional staff, sometimes supplemented by workers from other workplaces. If unions do include existing members in organizing drives, they’re often there to add legitimacy to the campaign by accompanying staff organizers at house visits, or being present for meetings where they can talk about their unionized workplace. In that model, most of the contact that non-union workers have is with full-time employees of the union.

Local 217, on the other hand, has spent the past few years changing from this typical staff-driven model to a member-driven approach based around a robust Leave of Absence (LOA) program. The union has won contract language that gives the union the right to take any member off the job without losing seniority.

Initially members on LOA focused on internal organizing during contract campaigns. But in the recent hotel drives, they turned outward to bring more workers into the union.

Donald Jean Marie is a bellman and shop steward at the Greenwich Hyatt. He took a leave to work on the Hilton organizing drive and later participated in the Sheraton campaign. For nonunion workers, he said, “it makes a huge difference, knowing that the person who’s telling you about the fight is someone who’s gone through the fight.”

Rank-and-file activists from those two hotels weren’t just the face of the union to prospective members; they also did much of the organizing legwork that’s typically delegated to union staff. Hotel workers did all but one of the house visits and ran the meetings with the Sheraton workers’ organizing committee. The LOA organizers also coordinated the work of 10 additional UNITE HERE members who volunteered three to five days a week on the campaign.

CORNERED ONE ON ONE

The anti-union campaign began before the company even knew about the union drive. Management could see the writing on the wall once other local hotels went union.

As soon as the Hilton workers won their election—by an incredible 110 to 5 vote, despite a union-busting campaign—Sheraton management swung into action.

The company raised wages by $3 to $4 an hour, started holding “employee appreciation events,” and sent in covert anti-union consultants to “survey” workers about how they felt about the job. It even hired the same firm that the Hilton had hired to attempt to bust the union effort there.

Cruz and Associates, the firm hired by both hotels, was started by a rogue former UNITE HERE organizer who now hawks his services in the “union avoidance” industry. One of its other clients? Donald Trump, who paid Cruz and Associates $560,000 in 2015 to fight a UNITE HERE drive at his Las Vegas hotel. Workers there voted 238 to 209 to join the Culinary Union (UNITE HERE Local 226).

And after Sheraton workers made their campaign known—50 workers marched up to the hotel’s general manager, who hid, and presented their demands for union recognition—management went into overdrive. Consultants took shuttle drivers on rides to nowhere, in order to talk at them about how bad the union was. Managers would go into open rooms where housekeepers were cleaning and close the door behind them to talk with workers one on one.

In the final stretch before the election, the consultants’ efforts hit a fever pitch. “It built up to the point where we’d have two-to-three-hour [anti-union] meetings every single day, for four weeks,” said Hutchins. The union-busters took up so much of the workers’ on-the-clock time that they had to offer overtime and bring in temps to keep the hotel running.

Sebastian G., another front desk agent at the Sheraton, said that consultants “were walking around constantly,” asking, “What is it going to take for you to vote no?”

Hilton and Hyatt workers used their experiences to warn Sheraton workers about the lies and tactics they should expect from the union-busters. In organizing lingo, this is called inoculation—giving people a taste of how the bosses are going to respond, so that it’s much less effective.

“We already went through this—they used the same tricks with us,” said Orjuela, the Hilton housekeeper. “It was important to tell them, ‘Don’t fall into the trap.’”

Sheraton workers had some fun with it. “We put a small booklet together: ‘10 most-used tricks by the company, and the truth behind them,’” said Jean Marie, the Hyatt bellman. Sheraton organizing committee members handed out the booklet to their co-workers before management called them in to anti-union meetings.

“After some of these anti-union meetings, workers would refer to things as trick #2, or trick #4,” Sebastian G. said. “One of the games we would play in the cafeteria was a ‘bingo’ with the talking points.”

Hilton workers were still negotiating their first contract, which the Sheraton tried to use against the union. “The bosses always said to them that we at the Hilton didn’t have a contract and weren’t going to get a contract,” said Orjuela.

But the union turned that in its favor. “We invited some workers at the Sheraton to join us in negotiations, to accompany us, there at the negotiating table,” said Orjuela, “to show that it was a lie, that everything was real,” said Orjuela.

When the union-busters leaned on the old line that the union was a third party hungry for dues money, it landed flat. “Any time the company wanted to say that the union is some outside force, workers could say, ‘No, the union is Donald, the union is Lupe [another one of the LOA organizers],’” said Sebastian G. The prominent role of union members in the organizing drive, he said, “demonstrated the fact that the union is a democratic organization of us, inside the hotels.”

The Hilton workers did more than disprove the company lies. They showed what a well-organized group of workers could achieve. Hilton workers spoke to Sheraton workers about the bargaining process and what they were winning along the way. “To hear that directly from the mouths of the workers who got it, and who won it through fighting, was very inspiring,” said Sebastian G.

In spite of the intense anti-union campaign—and management sending supervisors to vote against the union—Sheraton workers won their election in December, 69-32. They’re now fighting for a first contract, building off the cross-hotel connections they forged during the union drive.

The union has brought in members from a Chicago Marriott who are employed by the same management company—Davidson Hotels, which operates 35 hotels across the country—to talk about their own contract fight. The workers, from Chicago’s Medical District Marriott, voted to join UNITE HERE Local 1 last year. They went on a one-day strike in November and have initiated a boycott of the hotel as they battle for a first contract.

Stamford Hilton workers, meanwhile, won their first contract in January, which Orjuela describes as “a great blessing.” It’s the first union contract at any hotel in the city.

A version of this article appeared in Labor Notes # 482. Don't miss an issue, subscribe today.
Joe DeManuelle-Hall is a staff writer and organizer at Labor Notes.
Related
Viewpoint: The NLRB is Underfunded and Understaffed—And That’s a Big Threat to the Current Organizing Wave »
A New Sense of Possibility: Starbucks and Amazon Wins Inspire Organizing at Trader Joe's, REI, Target, and Apple »
Deep South Baristas Strike Starbucks »
‘You Have to Be Very Persistent’: Lessons from the Starbucks Union in Chile »
Amazon Bites Back in Vote at Second New York Warehouse »