Using 'Just Cause' to Defend Against Unfair Discipline 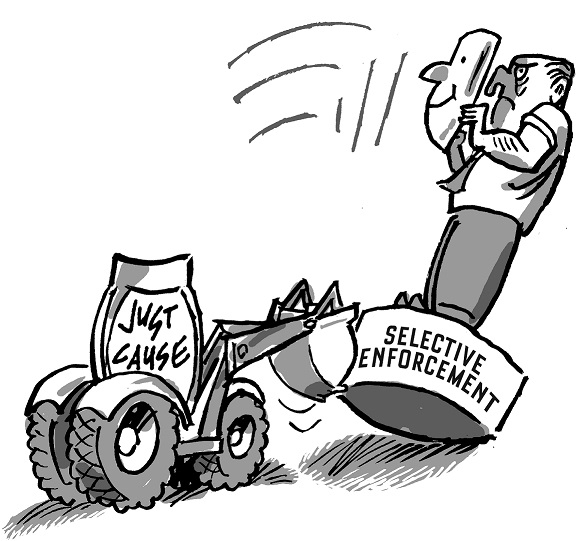 The second edition of Just Cause: A Union Guide to Winning Discipline Casesis a step-by-step guide filled with advice, practical tips, and winning techniques.

The principle of “just cause” is the keystone of the collective bargaining agreement. By imposing rigorous qualifications for discipline, the just-cause standard protects everyone in the union.

If an employer could fire workers for trivial or manufactured reasons, it could easily rid itself of militant officers, stewards, and rank and filers.

A typical just-cause provision reads, “No employee will be disciplined or discharged except for just cause.” Some agreements use “good cause,” “proper cause,” “reasonable cause,” or simply “cause.” Labor arbitrators usually say such terms are equivalent to just cause.

Newly minted supervisors sometimes assume that just cause is an easy criterion to satisfy. On its face, it only appears to require a legitimate reason for taking action. Years of advocacy, however, have helped to mold the standard into a formidable bulwark.

Just Cause for All?

Many countries protect nonunion employees against unfair dismissal. England, France, Ireland, Germany, Japan, and Italy are among those that require all employers to prove just or good cause.

In the U.S., campaigns for “Just Cause for All” laws have been pursued at the state level. Organizers often cite recommendations by the International Labor Organization (an agency of the United Nations) and the Uniform Law Commission, which promotes uniformity of law among the states.

Montana was an early success. A 1987 statute gives at-will employees the right to sue for lost pay if discharged without “good cause.” It has, however, no reinstatement provision.

Just Cause for All campaigns allow union and nonunion workers to fight together for fairness and job protection. Email justcauseforall[at]gmail[dot]com for more information.

Just-cause protection marks a sharp dividing line between union and nonunion or “at-will” workers. With few exceptions, employers may not dismiss union workers unless they engage in egregious or repeated misconduct.

On the other hand, employers can fire at-will employees for “good cause, for no cause, or even for cause morally wrong.” An at-will employee can be discharged for a single mistake, an argument with a supervisor, an unintentional violation, off-duty conduct, or even for reasons that are patently false.

Since the 1960s many unions have relied on a checklist developed by arbitrator Carroll Daugherty known as “the seven tests of just cause.” Unfortunately, the Daugherty tests do not accurately reflect the way arbitrators currently decide cases. It was time to rethink the seven tests.

That’s why I undertook a review of more than 15,000 awards by labor arbitrators. The results are laid out in my book Just Cause: A Union Guide to Winning Discipline Cases, now available in a newly updated second edition. I found wide agreement among arbitrators on the following basic principles:

An employee may not be punished for violating a rule or standard whose nature and penalties have not been made known.

Punishing an employee for failing to follow a rule or policy that the employee does not know about is clearly unfair. Employers must publicize standards in handbooks, on bulletin boards, through the Internet, or by announcement. They must also identify potential penalties, especially if there is a possibility of suspension or discharge.

Q. Whenever our HR manager conducts a disciplinary interview, she tells the employee and the union representative not to discuss the matter with others. Lawful?

A. No. Employees covered by the National Labor Relations Act and parallel state laws have a legal right to discuss disciplinary matters with co-workers and the union. A gag order is permitted only if the employer has a reasonable fear that the employee or the union will intimidate witnesses, destroy evidence, fabricate testimony, or create a cover-up. Where these concerns do not exist or are not justified, a gag order is an unfair labor practice.

Q. A supervisor ordered a worker to take a drug test because of his unsteady appearance. When the results came back positive, the general manager called him at home and announced his discharge. Did the manager have an obligation to delay making the decision until the employee was able to come in for an interview?

A. Yes. A face-to-face opportunity to explain must always be allowed.

Q. A worker was suspended for a day for causing an accident. At the second step, Labor Relations said that due to his record and the cost of the infraction, the suspension should have been five days. Can the company raise the penalty?

A. No. Increasing a penalty during the grievance procedure is double jeopardy.

A. No. Construing the same conduct as two infractions, and issuing a penalty for each, is a form of double jeopardy.

Q. Our contract says the employer must give written notice to the union within two days whenever it discharges an employee. If the employer fails to meet the requirement, can we assert that the discharge lacks just cause?

A. Yes. According to many arbitrators, the employer must completely follow a contract's disciplinary procedure, or forfeit the right to take action— even if the employee is clearly guilty.

Punishment may not be imposed for violating a rule or standard that the employer has not enforced for a prolonged period.

When management fails to take action against an infraction for several months or longer, employees are encouraged to believe that the policy or rule is no longer in effect. In such circumstances, imposing discipline is equivalent to applying a rule of which the employee is unaware.

An employer must conduct an interview or hold a hearing before making a decision to issue discipline, must take action promptly, and must list charges precisely. Once assessed, discipline may not be increased.

Due process, a legal term for procedural fairness, is implicit in the just-cause standard. A paramount obligation is to allow a worker a chance to tell his or her side of the story before the employer makes a decision to impose discipline.

Charges must be proven by substantial and credible evidence.

Disciplinary action must be based on reliable evidence, not on rumor or speculation. Hearsay (an accusation by a person who does not appear at a hearing) does not support a severe penalty.

Unless justified by a valid distinction, an employer may not assess a much stronger punishment against one employee than it has assessed against another employee known to have committed the same offense.

Favoritism and discrimination are incompatible with just cause. Employers must treat all employees who commit the same or similar offenses essentially alike.

When responding to misconduct that is short of egregious, an employer must issue at least one level of discipline that allows the employee an opportunity to improve.

It is widely accepted that the purpose of workplace penalties should be to correct misconduct, not to punish or humiliate. When a possibility exists that an employee can improve, the employer should apply the lowest punishment that is likely to achieve the desired result.

Discipline must be proportional to the gravity of the offense, taking account of any mitigating, extenuating, or aggravating circumstances.

In addition to the seriousness of an infraction, an employer must consider any other circumstances that reduce or increase the likelihood that the grievant will repeat the offense.

A version of this article appeared in Labor Notes # 478, January 2019. Don't miss an issue, subscribe today.
Related
Viewpoint: A Smart Strategy to Defeat ‘Right to Work’ »
Union Fights 'Teacher Jail' »
Time to Update the Union Handbook on ‘Just Cause’ »
The Labor Law Reform We Need »
Just Say ‘No’ to Drug Tests — Then Bargain »