Relieving Racial Resentment in Our Unions 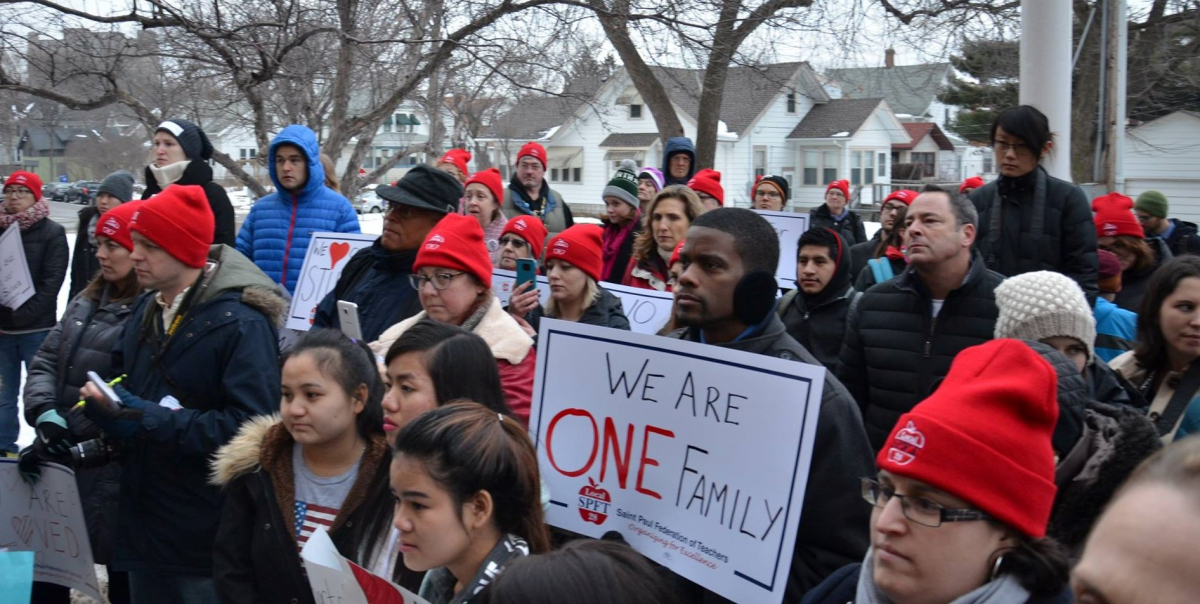 Given that the most bedrock union principle is “an injury to one is an injury to all”—solidarity—we ought to be at the forefront of combating the isms that divide us over race, gender, immigration status. Photo: St. Paul Federation of Teachers

An electrical workers local in San Francisco found itself in a mortifying situation: one of its members was outed as an active white supremacist. Wireman John Ramondetta had traveled to Charlottesville this August to march alongside Nazis and the KKK.

“For the membership as a whole there is disappointment, embarrassment, and disgust,” said Electrical Workers (IBEW) Local 6 Business Manager John Doherty. “The overriding theme is 'We're being tied to this guy!' He doesn't reflect our values.”

When someone put up flyers at Ramondetta's worksite, quoting his racist comments and saying “No brother of ours!” he quit the job. Doherty put out a letter saying the local “condemns white nationalism and white supremacy, as they are in stark conflict with the express goals of our organization.”

Most local unions won't face such visible examples of racism nor of protest, but a majority will face tensions over the politics of race. Because this is America, and racism is embedded in just about every institution we've got. Forty-three percent of those in union households voted for Donald Trump despite or because of his antagonism toward Black people and immigrants.

Given that the most bedrock union principle is “an injury to one is an injury to all”—solidarity—we ought to be at the forefront of combating the isms that divide us over race, gender, immigration status. What can unions do to create the understanding that leads to unity?

Wendy Thompson, a white woman, worked in a majority-Black Detroit auto plant for 33 years. She says she cannot remember a single time when she was in the women's restroom with only white workers that someone did not use the N word.

She also saw a lot of denial. When a noose was found hanging in her plant, and union leaders united to denounce the provocation, many of the white workers jumped their brains through hoops to argue that a noose wasn't necessarily a racist symbol: “Plenty of people have been hanged who weren't Black,” they reasoned.

Terry Day and Joe Fahey—one African American, one white—run workshops on racism for unions. “We are trying to assist in addressing this divide by creating a process and method,” Day said. Part of their method is “struggle of white workers with other white workers.” For a portion of their workshops, they separate members by race, finding that that tactic promotes openness.

Fahey says they try to “lower the threshold of what people define as racist and find ways of acting against it before it reaches the threshold of Charlottesville or member-to-member harassment.

“For white people to talk about racism,” Fahey believes, “it has to be very high-profile, and far away, with death involved and it's talked about on the nightly news. But that's not how racism works. It works on a daily grind level.

“White people need to talk about racism more and have a place to go where they can talk about it. That way the more they'll notice it and the more opportunities they'll have to do something about it.”

Communications Workers District 1 in the Northeast is creating ways for workers of different races or ethnicities to talk with each other.

The union is not perfect. “I have seen racism and sexism displayed on CWA social media pages, mostly by members in the comments, and certainly on the picket line,” says district organizer Bianca Cunningham, who was fired by Verizon Wireless after helping organize the union there. “My experience is that most of this behavior is overlooked.”

But the district has been taking on the isms in a concerted way through education and....talking. It has set up day-long workshops based on the book Runaway Inequality by Les Leopold. The workshops don't look only at the devastating changes in the economy that union members are familiar with—that kind of inequality.

Trainers (CWA members off the shop floor) also show how the U.S. became “incarceration nation” by putting millions of people of color behind bars. Attendees learn startling facts such as the wealth gap between races—Black college graduates own much less wealth on average than white high school dropouts.

“We have had straight white working class men who have cried and had revelations that they themselves are racist or xenophobic,” says Cunningham, who is Black.

In the district's Staten Island Local 1102, half the members are white men who work for Verizon. The other half are call center workers who are mostly African American and Latina women, at a different employer.

It sounds like a recipe for division, but 1102 leaders are careful to make sure the two groups are brought together. “Whenever we have trainings or events, core groups from both units are there,” says President Steve Lawton. “They've built a camaraderie, the leaders of the two groups have each other's backs. We have people from both units working on a Vision Forward committee that is mapping out the long-term goals of the union.”

The local supports a Staten Island worker center that organizes immigrants—not without controversy. One of the local's most successful events was to bring an undocumented immigrant to the union hall for a luncheon where members could ask questions.

Speaking of some conservative Verizon leaders, Lawton said, “They listened to an undocumented worker talk about his experiences, why coming here legally is not an option for the poor.

Curriculum for a one-day workshop on Runaway Inequality (can be shortened).

Images and graphics from the St. Paul Institute's introduction on race and economic issues.

Training materials on member-to-member harassment from the United Electrical Workers.

Curriculum for a series of workshops from the AFL-CIO: “Talking About Racial and Economic Justice: Tools To Move A Constructive Conversation Within Your Union and Within Your Community.” Activities, suggested readings, and videos to spur discussions. Topics include “Understanding Power, Bias, and How Racism Works” and “Changing Local Union Practices.”

“Everybody who came to that luncheon had a positive reflection about that day. 'I never knew,' they said to me.”

None of this would be possible if the leaders promoting it didn't have credibility—such as that gained by leading a successful strike at Verizon last year.

And CWA members say much of the success of the “Inequality” workshops is due to the fact that members conduct them. “Because it’s the nurse from your local hospital who you work with, or the phone guy at your garage who you see all the time,” says Margarita Hernandez, a program coordinator, “it really changes the conversations and how comfortable people are in speaking up.”

TEACHERS TEACH EACH OTHER

The National Education Association has established the St. Paul Institute to help locals who want to “move to an organizing model,” says Caitlin Reid, a pre-K teacher in St. Paul, Minnesota, and local executive board member. Reid is one of the rank-and-file teachers who get released from school to do trainings for teachers who come from around the country.

One of the Institute's introductory activities is for teachers in small groups to look at political cartoons and infographics posted on the walls, dealing with income inequality and racial disparities in income, housing, and school segregation.

“We ask starter questions and they discuss in their groups,” Reid explained. “We get a lot of 'wow, this is really profound.' They immediately say, 'can I get copies of these?'

“Even when it was a more conservative local with Trump-supporting leaders, they still seemed to be participating in the conversation.”

The training covers both racial issues and economics. The teachers believe presenting hard facts works for their members. “We say, “It's not personal, this is the reality,'” Reid said.

The teacher-trainers may later visit the locals that visited, to help support them in their campaign or organizing.

A version of this article appeared in Labor Notes #464. Don't miss an issue, subscribe today.
Jane Slaughter is a former editor of Labor Notes and co-author of Secrets of a Successful Organizer.
Related
Swarming Solidarity: How Contract Negotiations in 2021 Could Be Flashpoints in the U.S. Class Struggle »
Interview: If Only Unions Had Managed to Organize the South, Could Trump Have Been Avoided? »
Why and How SEIU Members Are Calling on Our Union to Expel Cops »
Chicago Unions Demand to Defund Police and Fund Health Care for All »
Black Workers at Ohio Ford Plant Denounce Racist Taunts »