Labor's Stake in the Fight for Veterans' Health Care 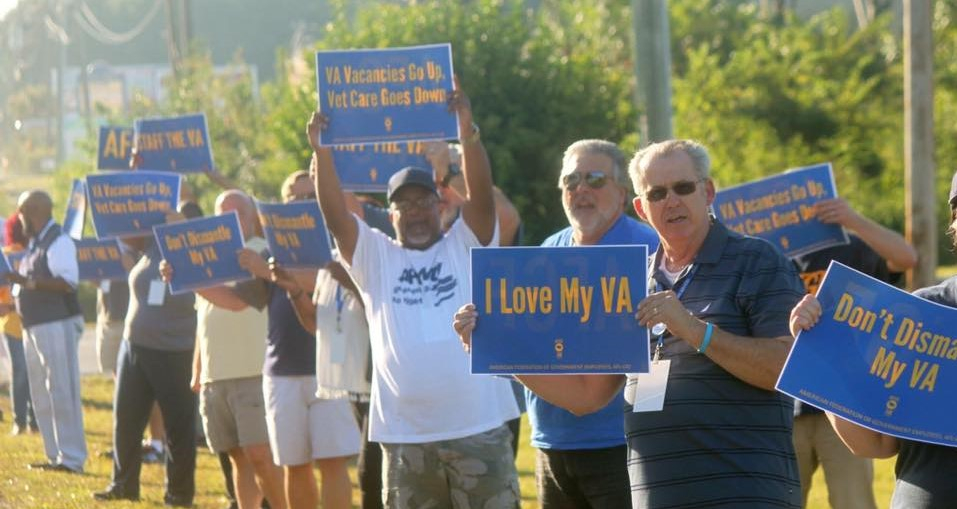 In January President Trump delivered on his promise to shrink the federal government: he announced a hiring freeze, despite thousands of federal job vacancies.

But Trump’s hiring freeze deepened an already existing staffing crisis at VHA hospitals and clinics throughout the U.S., where there are 49,000 vacant positions.

Union activists believe the resulting understaffing is designed to generate patient complaints and negative publicity that will cause veterans and their families to lose faith in VA-provided care.

“Some in Congress want to underfund the VA so they can say that government doesn’t work,” says Dusten Retcher, a 29-year old Air Force veteran, who processes veterans’ benefit claims in Minneapolis. “Then they want to turn it over to the private market.”

The VHA covers nine million veterans who qualify based on their low income or, like Retcher, have a service-related medical condition. Unlike Canada’s single payer system or Medicare in the U.S., it does not function primarily as an insurer, simply reimbursing private hospitals, doctors, or pharmacies.

Instead, like Britain's National Health Service, the VHA provides direct care to veterans, via salaried personnel who are not paid on a fee-for-service basis. As the nation’s largest publicly funded, fully integrated health care network, it’s a model of socialized medicine more far-reaching than the single-payer plans proposed by Congressman John Conyers and Senator Bernie Sanders (who is also a leading defender of the VHA).

Overall, the VHA employs 300,000 people, a third of whom are veterans themselves. Because caregivers are salaried, they have little incentive to over-treat patients. And, as a large-scale public agency, the VHA can negotiate with pharmaceutical and medical equipment companies to secure prices lower than private hospital chains get.

This combination of “socialized medicine,” negotiated prices, and a salaried workforce heavily represented by the American Federation of Government Employees (AFGE) is not popular in a Republican Congress or in the Trump White House.

Earlier this summer, both attacked the due process rights of AFGE members by passing the “VA Accountability Act.” As the AFL-CIO notes, this draconian measure, backed by some Democrats, eliminates “any guarantee that employees will feel safe speaking out against mismanagement or to protect patient safety.” According to the federation, it “destroys grievance procedures that have been successfully used throughout the federal government to provide protection against arbitrary treatment.”

Such union-busting legislation—and more currently under consideration by Congress—has been a longtime objective of right-wing Republicans and the “Concerned Veterans of America.” CVA is an astro-turf group, funded by the Koch brothers, which has gained policy-making influence within the VA since Trump’s election. While CVA has few actual members, it has been quite successful in promoting negative coverage of the VHA in the media, including the New York Times and NPR.

Unlike traditional veterans organizations (American Legion, VFW, Disabled American Veterans), CVA hates the VHA and would like to see it totally privatized.

CAMPAIGN TO SAVE THE VA

To resist this outsourcing threat, VHA union members and their allies have launched a multi-front campaign. They have held dozens of town hall meetings, local “Save the VA” rallies, and protests with labor and veterans organizations in California, Arkansas, Indiana, Illinois, New Mexico, Tennessee, Montana, Ohio, and Colorado. More protests are scheduled in October. Such activity, throughout the federal government, has helped AFGE sign up 5,000 new members since January.

Bay Area AFGE activists joined fellow VHA staffers, their patients, and other concerned veterans at a speak-out in San Francisco attended by House minority leader Nancy Pelosi. Michael Blecker, a leader of Swords to Plowshares who served in Vietnam, warned that local programs to reduce homelessness among veterans were at risk of being curtailed.

Pelosi argued that GOP critics care little about improving VHA services or reducing their cost. “The people who want to privatize the VA don’t want to make it better,” she said. “They want to make a buck.”

In its critique of privatization, Fighting for Veterans Healthcare, a San Francisco–based advocacy group, notes that VHA hospital budgets are already stretched thin because of chronic underfunding. As the financial burden of paying for more costly private care increases, the group argues, in-house staff shortages will worsen, specialized research and treatment programs will be cut, demoralized employees will leave, and “the VA will become a shell of itself.”

At the Denver VA medical center, where workers rallied against privatization August 23, AFGE Local 2241 President Bernard Humbles says employee frustration is mounting. “I’ve had some members that just say, ‘I’m done,’ and leave because of the overwhelming workload,” he said. “We need to fill these positions.”

Bernie Sanders, former chair of the Veterans Affairs Committee in the Senate and longtime defender of the VHA, has introduced legislation to reduce staff shortages by allocating $5 billion to new hiring. But Secretary for Veterans Affairs Dr. David Shulkin, who served in the Obama administration, is under White House and Congressional pressure to expand a program called “Choice” instead.

Created by Congress in 2014, Choice allows veterans who have to travel 40 miles or more to the nearest VHA facility, or who face appointment delays longer than 30 days, to use private providers instead. Federal reimbursement of these private hospitals and doctors has already drained billions from the VHA. A recent internal report revealed a pattern of over-payments to TriWest and Health Net, two private insurers hired to set up outside provider networks and process the Choice program's reimbursement claims.

Meanwhile, as a Rand Corporation study found in 2015, actual wait times at the VHA are shorter than in the private sector, and the quality of veterans' care is equal to or superior than that received by private hospital patients.

AN OUTSOURCING GOLD MINE

Nevertheless, Republicans seek a wholesale expansion of VHA outsourcing, to create a gold mine for the health care industry. Their goal is to steer more veterans toward non-VHA providers, including for-profit firms that would fill prescriptions, handle routine visits, or provide out-patient services like audiology and optometry.

The fight to defend quality care for veterans is uniting caregivers on the VHA staff, their patients, other veterans, and concerned community members. The fight also helps expose the ever-widening gap between President Trump’s pro-veteran rhetoric and the actual impact of his policies on working class people who have served in the military and, in some cases, voted for him last fall.

At a late September protest at the VA Medical Center in Minneapolis, AFGE picketers were joined by other unionists, including Navy veteran Tom Edwards, who carried a sign saying, “No Vet Should Wait in Line.” A retired postal worker, Edwards told Workday Minnesota that he hears plenty of rhetoric about “supporting our troops.” But when they come home and need access to skilled, specialized care like the VHA provides, it’s another story. “What’s happening in this country is a travesty,” he declared.

Suzanne Gordon is a CWA/NewsGuild member and author of The Battle for Veterans’ Healthcare: Dispatches from the Front Lines of Policy Making and Patient Care. Ian Hoffmann is a legislative and political organizer with AFGE, based in northern California. For more on the fight against VHA privatization, see ffvhc.org.