This Is Not a Drill: Bracing for the Trump Era 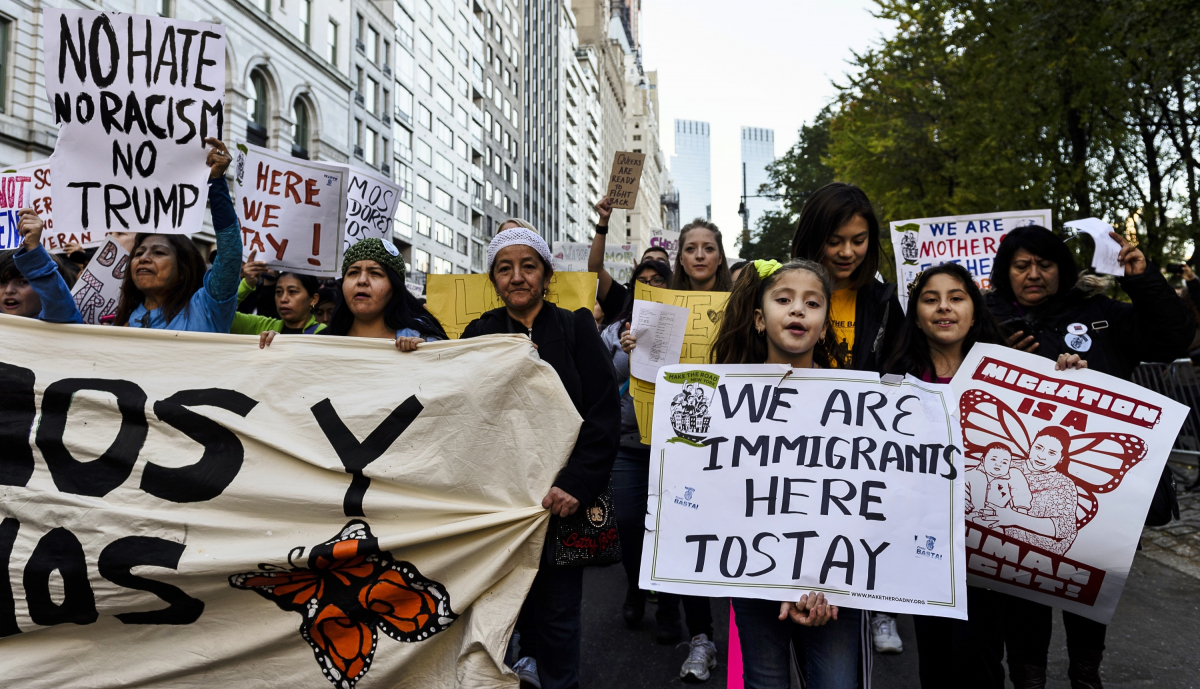 It’s labor’s job to trumpet an ambitious vision of what our society could be long after the election cycle winds down. If not now, when? Photo: Paul Takeuchi

Donald Trump’s win is the gut-punch finale to a surreal election season. For thousands of rank-and-file activists the outcome is even more bitter after the inspiration and energy stirred up by Bernie Sanders’ improbable campaign.

Unfortunately, we don’t need a crystal ball to figure out what a Trump presidency has in store for labor, especially with Republicans controlling the House and the Senate.

National “right-to-work” legislation, outsourcing and privatizing more public services, large-scale deportations, a ban on prevailing-wage laws, pulling the plug on Obamacare—these are just the tip of the iceberg. So after we mourn, we need to organize.

Near the top of labor’s to-do list is preparing for the real possibility that the whole country may be right-to-work before the snow melts.

As we’ve written before, such a law isn’t a death sentence. Unions have survived, even thrived, in right-to-work states. But as we saw in Indiana, Wisconsin, and Michigan 2012-2015, decades of business-as-usual unionism have left most of our movement ill-prepared.

Last year’s Supreme Court case Friedrichs v. California Teachers Association, which could have required open shops in the public sector, was a dry run—and a painful reminder that most unions don’t realize what it’s going to take to survive in open-shop America.

Many put their heads in the sand. Those that tried to prepare for Friedrichs usually assumed all that was needed was a better explanation of the “union advantage” together with high-tech mechanisms to sign up members and collect dues. Few asked the deeper question—what inspires people to organize a union in the first place?

What’s needed is not a better sales pitch, but getting back to basics. Members will stick with a union that’s visible and vocal in the workplace, one that uses collective action as a shield and a stick against management’s abuses.

No one is riding to our rescue. Members will have to do this for themselves. And union leaders who want to inspire more rank and filers to step up to the task have to mean it when they say “you are the union.”

For too long unions have treated members as an ATM for predetermined priorities or an unruly nuisance that needs to get “on program.” This democracy deficit explains why so many members feel disconnected—and why so many are likely to vote with their feet under right to work.

When you’re getting clobbered every day on the job and no one seems to notice, why would you want to foot the bill for an agenda you had no hand in creating, one that offers you little relief?

But simple self-preservation isn’t the only reason union members need to reclaim the driver’s seat. It’s also the only way unions can identify, recruit, and train enough leaders for the fights ahead.

Defensive victories, much less forward progress, in the Trump era will require more audacity and breaking a lot more rules. Precious few members will be willing to take those risks unless they’re part of making the plan and steering the ship.

WHICH US, WHICH THEM?

Drawing in exponentially more leaders will require a shared understanding of how we got into this mess—something labor can no longer sidestep after this election.

Exit polls show that 51 percent of voters in union households voted for Hillary Clinton, the lowest percentage for a Democratic nominee since 1980. The numbers were even worse in white working-class communities across the Midwest, where over the last 15 years millions of factory jobs have disappeared.

After voting for the nation’s first Black president by large margins in 2008 and 2012, how could so many union members pull the lever for Trump, a candidate who nakedly stoked racial resentments and blamed Mexican immigrants and Muslim refugees for the country’s problems? Figuring that out will require frank conversations with our co-workers—uncomfortable but essential.

Unions are one of the few places where Trump supporters and those on the receiving end of the backlash are in the same room. And there’s no stronger anchor for the fight against Trump’s racial divide-and-conquer than labor’s principles of solidarity.

Millions embraced Sanders’ argument that the devastation in working-class communities stems from unchecked corporate greed and a government that’s bought and paid for by bankers and billionaires.

This is fertile ground for creating a different common sense—without whitewashing history or ignoring labor’s own checkered past, from Jim Crow to immigration.

AN INJURY TO ALL

An injury to one is an injury to all. We can put that principle to work by defending the people Trump is attacking, starting with our own members.

For instance, many unions have negotiated contract protections for immigrant workers when employers challenge their legal status or Immigration and Customs Enforcement demands audits.

Given Trump’s promise to deport 3 million immigrants once he’s sworn in, we need to extend such contract protections everywhere—including to workplaces with no immigrant workers, as a declaration of solidarity and an organizing opportunity.

The same goes for ensuring Muslim workers’ right to religious expression—the issue that laid the foundation for the very first Fight for $15 campaign, the one at the Seattle airport, which kicked off a national movement.

In health care, education, and much of the public sector, we have more points of connection—it’s easy to make the case for defending our patients, students, and clients too.

And starting within our ranks can lay the groundwork for unions to take the next step and help defend targeted communities, the way the Electrical Workers (UE) and the Chicago Workers Collaborative did in 2007 when they developed a citywide rapid-response network.

Through pickets and direct action, the network helped hundreds of immigrant workers keep their jobs. And in 2008 it mobilized union members and community activists to serve as a buffer between police and the Republic Windows and Doors workers who occupied their factory.

To reverse the rightward momentum that brought Trump to power, we’ll need thousands more of these experiments in community solidarity.

As we gear up, we need to take a hard look at what happened at the polls and why. The flaws in labor’s electoral strategy have never been more glaring.

For more than a generation unions have placed our fate in the hands of political insiders and party operatives. Each election cycle we pour more money, time, and shoe leather into Democratic candidates and campaigns—and have less and less to show for it.

It’s past time for union leaders to admit that the Democratic Party is run by suits. The people calling the shots are perfectly comfortable with trade deals like NAFTA, and completely out of touch with working-class voters.

They’ve won handsomely at the Wall Street casino. They idolize Silicon Valley billionaires. They embrace privatization schemes such as charter schools. Voters didn’t just reject these policies—they rebelled against a party run by and for the elite.

Thankfully there was some debate about labor’s electoral strategy this year, led by the Communications Workers, National Nurses United, the Amalgamated Transit Union, the Longshore Workers, the UE, and the Postal Workers, who broke with AFL-CIO decorum and backed Sanders in the Democratic primary, where he bested all expectations.

Had larger unions such as the Service Employees, Teachers, AFSCME, and the National Education Association lined up behind him, Sanders could have secured the nomination—and we might be looking at an entirely different landscape.

The Sanders campaign revealed a widespread hunger for an audacious social and economic agenda. Unlike the politicians on both sides of the aisle who’ve spent generations telling us to lower our expectations, Sanders challenged voters to dream big, and their response was overwhelming. We live in the richest country in the history of the human race. Why can’t we provide health care for everyone, or have the best schools on the planet, or develop viable alternatives to fossil fuels?

It’s labor’s job to make sure these aspirations don’t disappear, and trumpet an ambitious vision of what our society could be long after the election cycle winds down. If not now, when?