How D.C. Drivers Put the Brakes on Unsafe Buses

How can you force city leaders to confront the effects of privatization? Subcontracted bus drivers in Washington, D.C., did it through their contract campaign.

D.C. Circulator drivers who had been making $8 an hour less than their public sector counterparts came up to par after they shamed their employer for sending out unsafe buses.

Petition: We Stand with Tiny 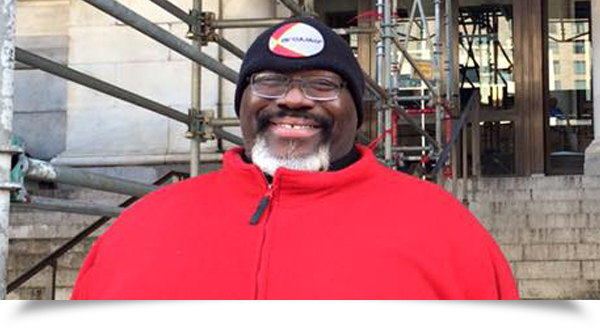 Seven-year driver Flynn “Tiny” Burke, a leader in the contract campaign at the DC Circulator, was fired September 30 on what ATU is calling trumped-up charges.

The union says it's part of a wave of retaliation by First Transit after workers organized a vigorous contract campaign.

The Circulator is a privately managed bus line that operates like a shuttle. It charges just $1 per ride, and serves mostly tourists and white-collar professionals. Meanwhile the city’s Metro buses, which serve more working-class commuters, charge $2.50.

More and more cities are contracting out segments of their transit service, such as paratransit for people with disabilities. Lawmakers like to tout the savings in city budgets.

But how can a private company do it cheaper and still turn a profit? “They’ve got to make money somehow,” said seven-year Circulator driver Flynn Burke, a shop steward and bargaining team member. “Usually it’s on the backs of workers and safety.”

In D.C., it was both. The Circulator’s wages were far lower than Metro’s—and the buses were in such disrepair that they were putting drivers and riders at risk.

Brakes were faulty, for instance. Headlights were out. The straps to buckle in wheelchairs were so rundown that sometimes they wouldn’t lock. “We had buses where the doors were opening and closing while the bus was moving,” Burke said.

The Circulator drivers launched a safety campaign, lobbying the city council and taking their case to local radio airwaves.

They had two targets—the corporation First Transit, which runs the Circulator, and the city council, which holds the purse strings. It would take an additional $3 million to fund the union’s proposals.

It turned out that the transit agency had recently conducted a safety audit—but had kept the results secret. The union demanded the report be released. The agency refused.

Members knew otherwise. So they conducted their own audits, on their own routes. Every day drivers would mark inspection sheets with the problems and safety violations they saw. Stewards collected the results.

At a City Hall press conference, the drivers announced their findings. Ninety percent of the buses weren’t safe to drive, owing to brake and engine problems. Under pressure, the agency finally released its audit, which was similarly damning.

Drivers rallied at their bus garage and at Union Station, D.C.’s central train station, with community and religious allies. They packed a city council meeting and held a press conference at city hall.

On the buses, community allies would leaflet passengers, and drivers would talk about their fight to make the buses safer.

They linked their pay demands to the safety concerns. “Why should the people that work for these companies make less money, and have less benefits, and be less safe than if the city itself ran the system?” said driver Kewana Battle-Mason.

“We had been managing unsafe buses without casualties or accidents for so long,” Burke said. “They had to pay us what we were worth.”

Warm Up For a Fight

Circulator workers warmed up for their contract campaign with a fight over sick leave.

The city had passed an ordinance in 2014 guaranteeing paid sick days to all workers. But managers were flouting the new law, disciplining and even dismissing drivers for calling in sick.

After 100 workers signed a class-action grievance, the employer backed down and offered the dismissed workers their jobs back.

The pressure paid off. In their May contract settlement, the 189 Circulator drivers made big strides.

Longtime drivers, who had been earning $23 an hour, will reach $31 by the end of the three-year contract, matching what Metro drivers get.

Starting wages got a smaller bump, from $16 to $18. The union wants to boost that again in its next contract campaign. The deal also increased the company’s contributions to drivers’ 401(k).

And on safety, the drivers won the right to refuse to drive an unsafe bus. They can insist that any bus get certified by a mechanic.

That’s not an instant fix. Workers say the buses still need repairs. Stewards have to keep in regular contact with members, to make sure they aren’t getting pressure to head out in unsafe vehicles.

But since the raises kicked in, Burke said, he’s already seeing a difference. “You had people with kids living from paycheck to paycheck,” he said. “They can breathe now.”

The company has stopped demanding tons of overtime—and drivers no longer need that overtime to make ends meet. “These guys don’t have to work six days a week anymore,” Burke said. “Being fully staffed means you can actually enjoy the fruits of your labor.”

In future contracts, he wants to push for vacation days, an evening shift differential, and to replace the 401(k) with a defined-benefit pension—like the Metro drivers have.

For the Transit Union (ATU), this campaign offers a model of how to confront privatization. The Circulator drivers are members of Local 1764.

The Circulator’s lower wages and benefits threatened to undercut Metro drivers. “If we don’t bring up the floor, they are going to lower the ceiling,” said ATU President Larry Hanley.

Privatized transit also gets pitted against public transit in city budgets. Local 689, which represents Metro bus drivers and rail operators, has criticized a proposed Circulator expansion for pulling resources away from the public bus and train system.

Metro desperately needs infrastructure investment and its own safety overhaul. Train derailments and delays are commonplace. To fix these problems, the only funding sources the agency is looking at are fare hikes and cuts to workers’ benefits.

It’s up to workers to expose the human costs of contracting out, Hanley said. Focusing first on the mid-Atlantic—including Baltimore, D.C., and the suburbs of Maryland and Virginia—the union aims to defend transit routes for the most vulnerable, like people with disabilities, as well as wage and benefit standards.

He points out that Democrats as well as Republicans are making the call to privatize. “The people who do it almost never get called out on it,” Hanley said. “We’re calling the question—what is the point of privatization?”

“If the whole point is just to save money, we are endangering the lives of the passengers and drivers,” said Battle-Mason. “Why are we doing it?”

A version of this article appeared in Labor Notes #451, October 2016. Don't miss an issue, subscribe today.