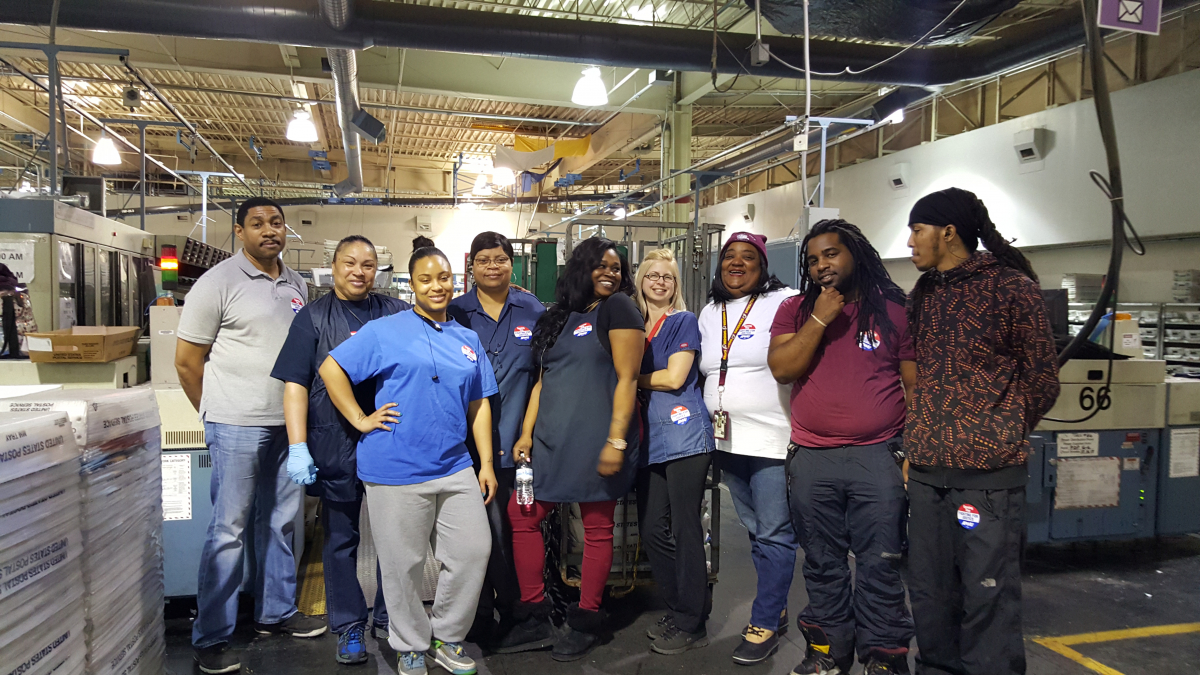 On the job, postal workers built pressure by wearing union shirts, stickers, and buttons every Thursday with the message “Good Postal Service! Good Jobs! Good Contract!” Even a simple disruption of routine can be unnerving to bosses. Photo: APWU, Southern Maryland.

They didn’t end three-tier in a single blow. But in a new contract covering 200,000 members, the American Postal Workers Union made serious headway and fended off most concessionary demands, including the Postal Service’s effort to create yet another tier.

The union entered bargaining with little obvious leverage. It was up against a management that’s been openly collaborating with postal unions’ Congressional foes to push a frenzy of cuts—slashing delivery standards, shutting down mail plants, privatizing work, and selling off post offices to real estate sharks.

Postal workers can’t legally strike. If the union and management don’t reach a deal, an arbitrator writes the contract—which is what finally happened. Arbitrator Stephen Goldberg announced the results July 8.

He stopped short of eliminating the three-tier system, as the union had proposed. But the new contract shrinks the number of bottom-tier workers and improves their situation, while defending the traditional raises and no-layoff protection for the two upper tiers.

New York City mail processing clerk Carl Ross was riding the train to work when he read the results on his cell phone. “I think I screamed out loud,” he said. “It’s gone a long way towards making Postal Support Employees feel like they’re part of the U.S. Postal Service.”

Postal Support Employees (PSEs) are the worst-off members of the APWU, stuck in an indefinite temporary status. Since the last contract in 2010, all new hires have landed in this limbo.

They do the same jobs right alongside traditional career employees, but receive lower wages and minimal benefits. And their temporary status means PSEs always have to fear for their jobs—so management can squeeze more work and “flexibility” out of them. “You go wherever the management wind takes you,” Ross said.

He’s one of many union members who traveled to Washington, D.C., to testify to the arbitrator about working conditions. Six-day weeks and forced overtime every night are routine for PSEs in his facility, he said. Workweeks range from 50 to 70 hours.

“I come to work to provide a better life for my family,” Ross said, “not to forsake my family for the job.”

The old contract laid out a process to convert PSEs who were working full-time hours into career positions eventually, based on seniority. But management always dragged its heels, said Ross, a steward. It pushed each grievance to national arbitration, stalling results for months or more.

So the number of PSEs has hovered near the contractual limits—till now, up to 10 percent of all workers in motor vehicles and maintenance, and 20 percent of clerks. In negotiations, the Postal Service sought to add even more.

Instead, the new contract mandates that thousands will be converted to career positions by September 3. In the maintenance and motor vehicle crafts, with the conversion of all 3,500 PSEs, the category will vanish entirely. New hires in those crafts will go right into career status.

Not so in the union’s biggest craft, clerks, which includes workers at post office retail windows as well as those who process the mail in sorting plants. A thousand of the longest-serving clerks will be converted, leaving 27,000 PSEs.

These remaining temps will get a cumulative raise of 7 percent plus 50 cents an hour during the three-year agreement, plus access to Postal Service health benefits, six paid holidays (they had zero; career employees get 10), and for retail clerks, a uniform allowance.

The new holiday pay hit home for Ross. Last Christmas he was made to work a 12-hour shift, without it.

Other contract highlights include a one-year moratorium on further outsourcing of postal retail work (Staples, the target of a union boycott over its grab of APWU work, isn’t affected), a hold on plant closings at least through April 2017, and a bar on further subcontracting of motor vehicle work.

On the minus side, employees’ share of health insurance premiums will go up—the one major concession management got.

HOW THEY DID IT

What worked? One factor was a change in attitude at union headquarters. The last contract was settled without arbitration, when the previous officers agreed to the three-tier system.

Angry at the giveaways in that deal, members unseated their top officers in 2013, voting in a slate of activists who pledged to “stop the bleeding” by involving members and resisting concessions.

This time the Postal Workers held out against management’s demands through a year and a half of bargaining, mediation, and arbitration. “We could have settled for a new contract last year,” President Mark Dimondstein wrote in a message to members. “But it would not have been an agreement acceptable or fair to you, the member.”

On the job, workers built pressure by wearing union shirts and buttons every Thursday with the message “Good Postal Service! Good Jobs! Good Contract!” To bosses, even a simple disruption of routine can be unnerving. Managers in San Francisco soon showed their ruffled feathers—they distributed official T-shirts and told workers to wear those on Thursdays instead. Some workers refused; others gamely put on management’s shirts, but decked them out with union buttons and stickers.

As the contract expiration neared last year, the union organized a day of action, holding “I Stand with Postal Workers” rallies in 130 locations around the country. Members handed out leaflets, talked with customers about the union’s plan to defend and expand postal services, and gathered hundreds of thousands of signatures on support postcards mailed to the Postmaster General.

Once arbitration began, the union brought dozens of workers to D.C. to testify about their on-the-job concerns. Goldberg wrote that especially “the impassioned testimony of the PSEs” moved him to reject the Postal Service’s push to expand the temp category any further.

“For the first time, I felt included in my own future at the Postal Service,” Ross said. “That I had some contribution to making a better life for thousands of employees across the country—it’s actually quite humbling.”

The biggest are the APWU and the Letter Carriers (NALC), whose members deliver letters and packages door to door in cities. Smaller unions represent Rural Carriers and Mail Handlers, the latter a division of the Laborers union.

After the APWU agreed to three tiers in its 2010 contract, the Postal Service went after the other three unions for the same concessions. The Letter Carriers and Mail Handlers fought it to arbitration. In the end arbitrators imposed tiers, although both unions got better deals for their middle tiers than the APWU did—lower starting pay than first-tier workers, but the same top pay.

The APWU contract results are sure to loom large in the bargaining now underway for the Letter Carriers and Mail Handlers. The Rural Carriers have already settled their contract, agreeing to continue the tiered system—a fact that arbitrator Goldberg cited in his decision to impose the same on the APWU.

The relationship among the four unions had been testy since the ’90s. Leaders officially buried the hatchet in 2014 with the proclamation of a Postal Union Alliance.

The division “allows management to play one union against the other,” Dimondstein wrote. “We would be much stronger in future negotiations if all postal workers were united in one big postal union.”

A factor Goldberg weighed heavily was the poor standards at the Postal Service’s most obvious competitors. The law instructs arbitrators that postal workers’ pay and benefits should be comparable to the private sector.

In its successful case to preserve the PSE tier for clerks, management leaned on evidence that at UPS and FedEx, retail and mail processing workers earn even lower wages.

It’s no wonder that FedEx workers and retail workers at UPS are low-paid, since they’re nonunion. But it’s a scandal that the part-time union members who sort packages for UPS, a wildly profitable shipper, make so little per hour that they’re driving down standards in the public postal service. UPS new-hire sorters and loaders make $10 an hour and are guaranteed only three and a half hours of work a day.

For that, we can thank another union administration that’s gone along with tiers—the Teamsters. Members angry over contract givebacks there are running a reform slate for the union’s top offices this fall. A major theme in their campaign is the demand to end “part-time poverty” at UPS.

The APWU and UPS-Teamsters contracts will both expire in 2018. If reformers were at the helm in both unions, could we hope for a coordinated campaign to fight tiered pay in the entire package delivery industry?

Read more: Reformers in the Teamsters union are pushing to raise standards at UPS and beyond.

Alexandra Bradbury is the editor of Labor Notes.al@labornotes.org
Related
How We Began To Bring the Mail Back »
What Today's Union Reformers Can Learn from Miners for Democracy »
2022 in Review: Harsh Conditions, Good Surprises »
Frustrated Over Contract, Locomotive Engineers Vote to Oust President »
Rail Machinist Opens Bid for District Presidency »