Eight Ways Organizers Are Putting Our Secrets to Use 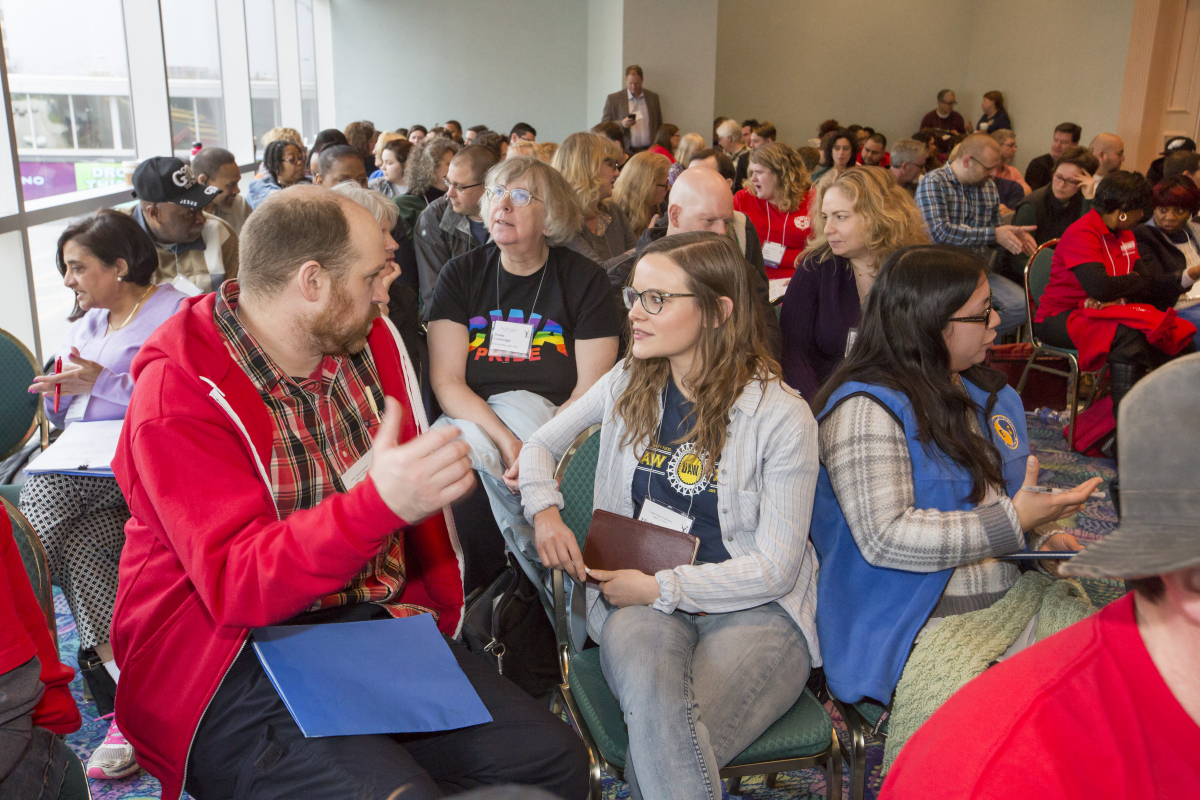 Labor Notes’ new book Secrets of a Successful Organizer is flying off the shelves. Since its release in April we’ve almost sold out our first print run, 5,000 copies, and we’ve just ordered a second printing. That’s record speed for one of our books.

But more exciting than the sales figures is hearing how organizers across the U.S.—and around the world—are putting Secrets to use. Here are a few ways:

Buy Secrets of a Successful Organizer ($15 plus shipping) or download free handouts here. The Massachusetts Teachers Association, a statewide union with 400 locals, ordered 700 copies for its members and leaders.

Under the leadership of activist Barbara Madeloni, who was elected president two years ago, the MTA has made a push to help locals engage more of their members in action. For instance, it held a summit on Open Bargaining to encourage transparent, participatory contract campaigns.

So far the union has distributed Secrets to the participants in its Next Generation Leadership and Union School programs, and to all first- and second-year local presidents. It’s also making the book available to rank-and-file members on request—and encouraging reading groups.

“The next step is to support members in using the book as a resource,” said Madeloni, who was recently reelected. She’s planning to highlight chapters, exercises, and ideas from the book in her weekly email to members.

United Teachers Los Angeles purchased 850 copies for all the chapter leaders at its summer leadership conference. “The whole conference was focused on organizing your school sites—how to address issues like bully principals, charter co-location, or special-education needs,” said Treasurer Arlene Inouye. “So this was a useful tool.”

Members are now planning study groups, and union leaders are promoting the book wherever they go. Inouye even sent a copy to union activists in Japan, who have begun translating it into Japanese.

Meanwhile in the company town of Springdale, Arkansas—the world headquarters of Tyson Foods—a worker center is using the free online handouts that go with Secrets for its organizing trainings with poultry plant workers.

Many of the state’s 28,000 poultry workers are immigrants, so the Northwest Arkansas Workers Justice Center has translated the handouts into Spanish. They’re campaigning against wage theft and exhausting line speeds, and for the right to bathroom breaks.

BUILD FOR A STRIKE

“I keep it in my briefcase to thumb through before organizing meetings,” said Chicago Teachers Union trustee Michelle Gunderson, a first grade teacher.

She’s planning to use the section on “Choosing an Issue,” for instance, at a meeting where members who are early-childhood educators will discuss concerns they hold in common with members of other unions who work with preschoolers.

CTU is building a coalition to improve funding for preschool programs, as the union broadens its alliances in preparation for a possible strike this fall.

Gunderson also used materials from the book to kick off a recent conference of the United Caucuses of Rank-and-File Educators in Raleigh, North Carolina.

After she presented the handout on “How the Boss Keeps Us Disorganized,” participants from 22 different caucuses around the country discussed the methods their own bosses have used. “It made people realize that these tactics aren’t just happening haphazardly,” Gunderson said.

PLAN ACTION ON THE JOB

Letter Carriers in Portland, Oregon, discuss a section of the book at each monthly meeting of Branch 82’s organizing committee. These discussions are helping to get new faces involved in the committee, including several from the union’s lowest tier, City Carrier Assistants.

“People want to do something to change their working conditions, because they’re bad and getting worse,” said retiree Jamie Partridge, a longtime activist who founded the organizing committee in the 1990s.

Conditions for City Carrier Assistants are “abysmal,” he said. “They’re bounced around from route to route, they never know what their schedule’s going to be, and they’re constantly hounded by management to go faster.” The book is helping them develop strategies for workplace action.

Partridge has also been publishing excerpts from the book in Branch 82’s newsletter.

Organizer Kjetil Larsen of the 145,000-member United Federation of Trade Unions (Fellesforbundet) ordered the books after seeing the free handouts on our website.

Though Norway has a union density of 52 percent, that number has declined in recent years, and temp agencies have grown in such industries as construction, shipyards, and farming. Larsen, who just returned from a training with U.S. unions, thinks it’s time “to make some changes before we’ve reached the level of crisis that you have there.”

He wants to use the book to develop more workplace leaders. “Lots of organizers are running around and acting like they are the actual shop steward,” Larsen said. The trouble with that approach is, “you don’t get any activists, and you lose the active shop stewards in the workplace, and suddenly the whole system of trade unionism breaks down.”

Larsen and other organizers are using the methods described in the book to identify workplace activists and issues ripe for organizing at a plumbing company in Oslo.

In Montpelier, Vermont, members of AFSCME, the Electrical Workers (UE), and the Vermont State Employees Association have formed a study group on Secrets. Before each meeting, participants are asked to read a few chapters.

The conversations center on the problems people have faced at work or in their unions—including excessive use of temp workers by the state government and forced unpaid overtime at a big human service agency.

“It’s challenged some people to think about the way they’ve functioned,” said Traven Leyshon, a retired Teamster and president of a small AFL-CIO central labor council.

For example, one local president was frustrated with members’ complaints that the union doesn’t fix their problems. He felt there was little he could do, since grievances are dealt with by a council that meets hundreds of miles away.

But according to Leyshon, he left that night’s study group thinking about ways to convince members that, instead of waiting on the distant grievance procedure, they could try to solve their problems on the job.

And at Utility Workers Local 127 in Wyoming, Chauffe Schirmer brought the handout “Aim for the Bullseye” to an officers’ meeting. “We need to identify people in each category—core members, activists, supporters, disengaged, or hostile,” she said, “so we can focus on moving them, one step at a time, closer to the center of the bullseye.

“We also have to get better at asking members to do small, specific tasks—just asking for ‘help’ doesn’t garner many results.”

LEARN TO TRAIN OTHERS

Labor educator Dave Cohen used handouts from the book—on listening, developing a rap for a conversation with a co-worker, mapping out your workplace, and creating an escalation plan—in an August organizing class at the Southern Workers Assembly in Raleigh.

Cohen said the book can help get activists to take the next step—training others in the fundamentals. “You’re probably already all doing this in your own organizing,” he told attendees, “but you’ve got to be able to explain it to other folks.”

To tell us how you’re using Secrets, email dan[at]labornotes[dot]org or call 718-284-4144. And if you’d like to review the book for your union magazine, let us know!

A version of this article appeared in Labor Notes #450, September 2016. Don't miss an issue, subscribe today.

Dan DiMaggio is assistant editor of Labor Notes.dan@labornotes.org
Related
Steward's Corner: How to Think Like an Organizer »
How We Turned Bargaining Around at Law360 »
A Simple Shop Floor Organizing Plan Any Essential Worker Can Use »
Special Handout: Organized People Have Power »
In Connecticut Hotels and Cafeterias, Recruiting a Rank-and-File Army of Organizers »