In Push for Education Reforms, Mexican Government Kills Teachers in the Street 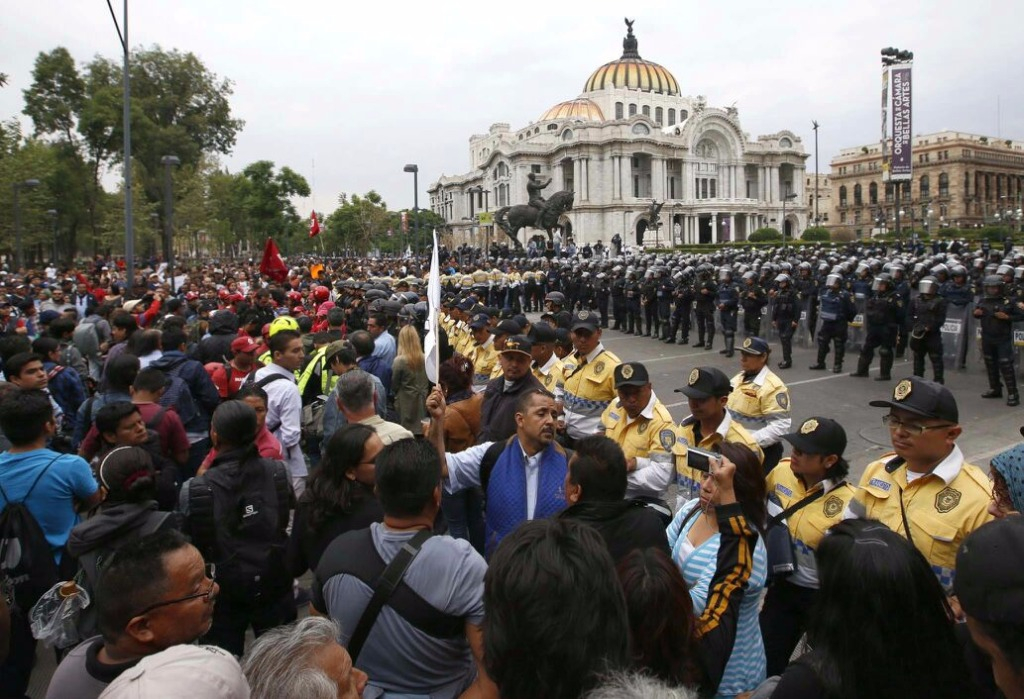 Mexican federal police opened fire on a demonstration June 19, killing a dozen teachers and students. Teachers are protesting the government’s brand of “education reform,” which they say will not help students and is designed to get rid of teachers and break union power.

Mexican federal police killed a dozen teachers and students June 19 when they opened fire on a demonstration in the small town of Nochixtlan, Oaxaca.

Teachers and supporters were protesting the government’s brand of “education reform,” which they say will not help students and is designed to get rid of teachers and break union power.

“The government chose force,” said Francisco Bravo, a leader of the National Coordinator of Education Workers (CNTE), the activist caucus within the official union. “They thought they could end our struggle quickly by arresting our leaders, that we would back down. They were wrong.”

The government at first denied that its troops were using live bullets, but was forced to retract that assertion. The dead included two middle school students and a motorist, according to the People’s Human Rights Observatory. Most were in their twenties.

The wounded, who numbered in the dozens, were turned away from the hospital at Nochixtlan, with only injured police officers being admitted. Twenty-one people were arrested and later released.

Two CNTE leaders, who headed the national union’s Section 22 in the southern state of Oaxaca, had been arrested June 12, charged with financial crimes, and immediately flown to a federal penitentiary in the north. At least seven CNTE members have been arrested thus far, with arrest warrants issued for 24 more in Oaxaca.

Oaxaca, one of Mexico’s poorest states, is where teacher-union activists have been most militant, holding dozens of sit-ins and highway blockades over the years. The June 19 demonstration was called to protest the leaders’ arrests and to continue CNTE’s three-year fight against education reform.

“Apparently the government didn’t know that CNTE is horizontal and doesn’t depend on just the leaders,” Bravo said.

CNTE is calling for a “dialogue,” but its meetings with the government over education reform last week and yesterday yielded no results. Mexican President Enrique Peña Nieto, on a state visit to Canada, intoned, “Laws are not negotiable.”

Tomorrow U.S. President Barack Obama, Canadian Premier Justin Trudeau, and Peña Nieto will meet in Ottawa for their first “Three Amigos Summit.” The Toronto Star published an op ed titled, “Mexico is massacring its citizens and nobody seems to have noticed.”

CNTE says the true goal of the changes is mass firings of teachers. They are now required to take a national knowledge test, a process that does nothing to evaluate how a teacher performs in the classroom. As in the U.S., where education reformers want to replace experienced teachers with brand-new college graduates from Teach for America, in Mexico under the new rules anyone with a degree can take the qualifying exam and become a teacher, with no training.

A goal is to get rid of the system of teachers colleges, which mostly educate students from poor and indigenous families—and which traditionally have been centers of radicalization.

In September 2014 in the town of Ayotzinapa, Guerrero, 43 teachers college students were about to participate in a protest when they were kidnapped. The government blamed a drug gang, but the government has no credibility with its own people.

Ever since, the killings have caused protests throughout the country. Marches, posters, and graffiti call for punishment of the guilty. The teachers of la CNTE have been at the forefront, demanding an impartial investigation.

Mexican journalists Renata Bessi and Santiago Navarro F. report that Peña Nieto’s education reform was proposed by the Organisation for Economic Co-operation and Development, an organization mostly made up of the Western world’s richer countries. The “OECD-Mexico Agreement to Improve the Quality of Education in Schools of Mexico” is just one part of a “structural adjustment” program for Mexico, they say, guided by the World Bank, International Monetary Fund, and Inter-American Development Bank. The goal is to open up services traditionally provided by government to investors, including foreign investors.

Ten other structural reforms to Mexico’s economy have also been approved, including pro-employer changes to labor law and changes in treasury, finance, energy, transparency, electoral procedures, and telecommunications. Twenty-two more demanded reforms are in the pipeline.

In December the Mexican Stock Exchange put government education bonds on the speculative market: National School Infrastructure Certificates. They were bought by BBVA Bancomer and Merrill Lynch for 8.581 billion pesos (around $450 million U.S.).

Since 2013 teachers have protested education reform by blocking highways—a common tactic in Mexico—holding ongoing encampments in the main squares of state capitals, and marching through the streets of Mexico City. CNTE upped the ante by calling for a national teachers strike May 16. Participation was uneven nationally but saw strikes and protests in states where they had not taken place before, such as Coahuila. For a time teachers in Chiapas blocked four highways.

The government moved quickly to fire 3,360 striking teachers in states other than the four southern states—Oaxaca, Chiapas, Guerrero, and Michoacan—where CNTE is strongest. Later, the Department of Education announced it would fire 4,500 in those states, but those firings have not been carried out yet.

On June 11, 1,000 police using tear gas evicted teachers from their tents in front of the Oaxaca education department. Teachers and supporters resisted with rocks and barricades and moved to the main square in the central city.

The strike continues (schools’ summer break begins July 15) and is strongest in Oaxaca. It was the first time, Bravo said, that members of CNTE in the four states had agreed ahead of time on a common strike date. It was “a step forward in organization,” he said.

CNTE (which received Labor Notes’ Troublemaker Award this year) was founded in the 1970s to fight the corruption of the official teachers union, the SNTE, and has grown into a power of its own. Bravo says SNTE leaders have given “unconditional support to the government” in the dispute over education reform. Even when members were killed last week, the union’s official solidarity statement with victims’ families expressed regret over “the way some have joined the debate with a belligerent position that promotes violence.” SNTE leaders went on to reiterate their support for education reform.

The war on the teachers is part of an overall government and employer assault on unions in Mexico—one that unions are mostly losing.

In 2006 the head of the militant Miners Union was falsely accused of embezzlement; he fled to Canada. A huge mining company, Grupo Mexico, later evicted the union from the birthplace of the country’s labor movement, the Cananea copper mine.

In 2009 the president privatized an electrical utility, partly in order to crush the 40,000-strong, militant union there.

In 2012 a “labor reform” law granted management flexibility it hadn’t had before—to outsource, hire part-time and temporary workers, and pay by the hour. Last year indigenous farmworkers in Baja California struck for higher wages, but the strike was smashed by the army and police.

When labor law reform was passed, Dan La Botz, the editor of Mexican Labor News and Analysis, wrote, “The Mexican independent labor movement is weaker today than at any time in the last 25 years.” Given the big defeats suffered by Mexican workers under a succession of pro-employer neoliberal presidents, it is even more remarkable that the teachers are holding out.

Asked about next steps, Bravo said teachers would hold “demonstrations, protests, blockages, marches, and rallies, till we have something definite from the government.”

Today the Mexican press reports that 29 highways in Oaxaca are being blocked, and that teachers have closed four international bridges from Chiapas to Guatemala.

Jane Slaughter is a former editor of Labor Notes and co-author of Secrets of a Successful Organizer.
Related
How Educators in Brookline, Massachusetts, Won an Illegal Strike »
Spring of Discontent: Mexican Berry Pickers Strike for a Bigger Share of Profits »
Minneapolis Strikers Demand a Living Wage for the Lowest-Paid Educators »
Richmond Educators Are First In Virginia to Win Bargaining Rights »
Twin Cities Teachers and School Employees Gear Up for Strike »