Retirees Win Round One 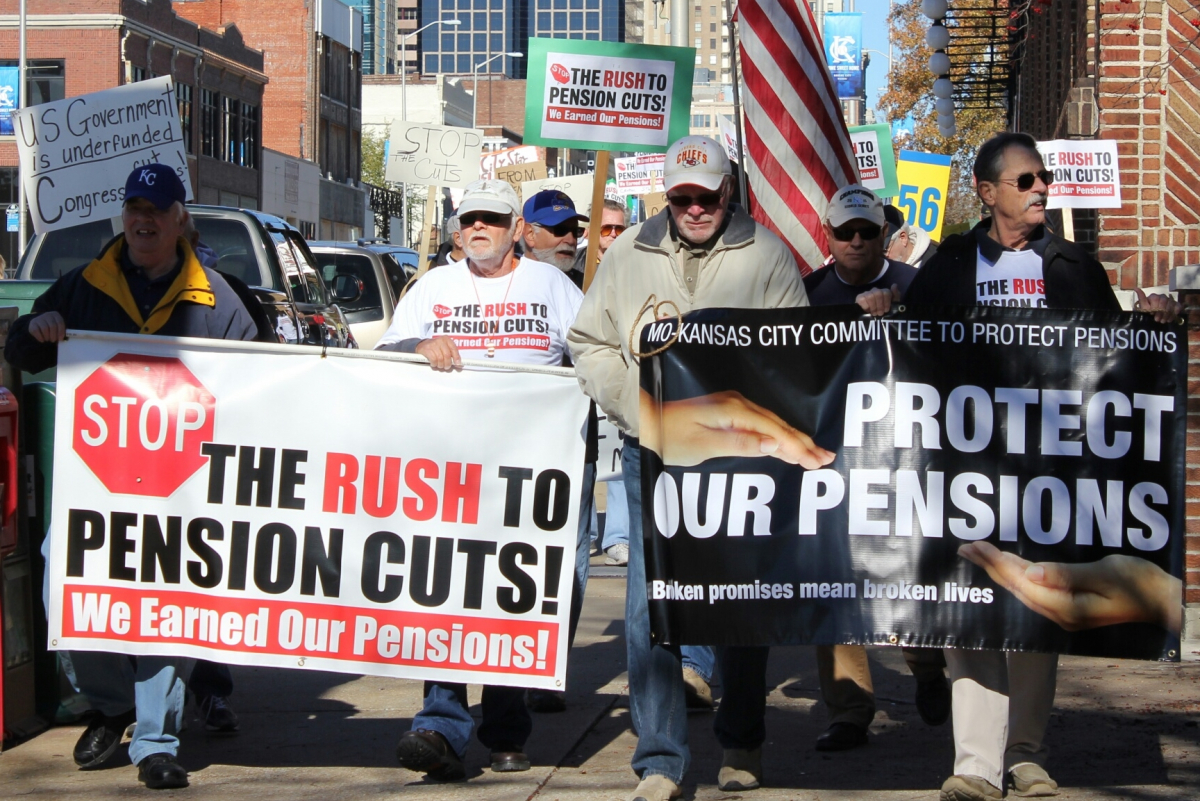 “We’ve taken just normal, everyday grandmothers and grandfathers, and we’ve made citizen lobbyists out of them.” Thousands of retired truckers have managed to apply the brakes to massive pension cuts—for now. Last year, retirees marched on the headquarters of the Kansas City Star to demand coverage of their pension fight. Photo: Mike Savwoir.

Who could have predicted a year ago, as Congress-sanctioned pension cuts gathered momentum, that thousands of retired truckers self-organizing in diners and union halls across Middle America would manage to apply the brakes?

“We’ve taken just normal, everyday grandmothers and grandfathers, and we’ve made citizen lobbyists out of them,” said Wes Epperson, a retired member of Teamsters Local 41 in Kansas City, “and it’s been because of necessity.”

The movement won a first-step victory on May 6, when Special Master Kenneth Feinberg recommended that the Treasury Department deny the Central States Pension Fund’s bid to slash 207,000 Teamsters' benefits by up to 70 percent.

“I must congratulate the retirees for reaching out to us and making sure that their voices were heard,” Feinberg told reporters. “I can tell you that listening to the retirees and what they had to say, of course that influenced.”

Thousands of Teamsters, retirees, and spouses helped win this reprieve through grassroots lobbying—rallying, writing letters to Congress, and packing the hearings Feinberg held around the country.

Stopping the rush to cuts was only the first battle in what promises to be a much longer fight. Without a funding solution, this pension fund—and others as well—will eventually run out of money, because half its payments are made to retirees whose companies went out of business, went non-union, or were allowed to exit the fund. UPS, by far the biggest Teamster employer, was let out in a 2007 deal, in exchange for letting the union organize its freight division.

Nonetheless, in Kansas City, activists rallied in celebration. “It was so nice to see these people smiling and cheering,” said retiree Dave Scheidt. “Prior to that Treasury decision, you could have cut the anxiety with a knife.”

Scheidt, who put in 32 years loading and unloading freight, and Epperson, who worked 43 years for UPS, are leaders in the Missouri-Kansas Committee to Protect Pensions.

“I’m a kind of layperson that got involved with this movement because we didn’t have much choice,” Scheidt said. “We tried for a long time to work through our union. When we saw they weren’t doing anything, we pretty much had to roll up our sleeves and do it ourselves.” Since then, he adds, “our union’s come around, and done quite a bit.”

Dozens of similar committees sprang up, with help from Teamsters for a Democratic Union (TDU) and the Pension Rights Center.

“It was grassroots, I can tell you,” said Ava Miller of Flint Local 332, retired after 42 years dispatching carhaulers. “Very few locals gave the retirees and the members any assistance on this. I did lots of calling, day and night. I would meet people at the union hall after the union meeting.”

Larry Mankowski of Teamsters Local 200 wrote this song to celebrate the Treasury Department decision and the fight still ahead to save Central States pensions.

At first, many people didn’t take the threat seriously. In a pension workshop at her first TDU convention, “it was just like somebody had punched me in the gut,” Miller said, “because this was for real.” But when she brought the news back, co-workers brushed her off: “Oh Ava, you’re such doom and gloom.”

Activists in Kansas City got the same reaction. Epperson remembers a breakfast meeting of freight retirees at the Corner Café last June. “We started talking to them about these pension cuts, and they all looked at us like we were crazy,” he said. “I don’t know what they were thinking—we were all a bunch of TDU troublemakers?”

But word must have gotten around, because the next month, so many people showed up that the café owner said, “You’d better find another place to meet.”

Next they tried the union hall, but got rebuffed as an “outside organization.” Undaunted, they turned to the American Legion hall, which is “a better place to meet anyway,” Epperson said. “Our union hall, you’ve got to walk up about 20 steps, and that’s difficult for retirees. We’ve got people on walkers, on crutches.”

In October, Central States itself kicked the organizing up a notch by notifying each beneficiary how much money he or she stood to lose.

“When they all got that letter, it was like everybody was piling on,” Miller said. “There were so many people just petrified.”

“It was catastrophic, the impact that this was going to have,” Epperson said. “There’s no way that a guy who’s 75 years old, on a set of crutches or in a walker, taking medicine every day, is going to get a job that pays him 25 or 30 bucks an hour.” Monthly meetings in Kansas City ballooned from 125 people to 450.

Tim Pagel of Houston still works in the freight industry, with 42 years under his belt. For years, he says, Local 988 officers shrugged off his proposals to organize against looming threats to the pension.

Pagel came home from last fall’s TDU convention impressed with how pension committees were using Facebook. “It’s safe to call me a senior,” he said. “I do okay with social media, but it’s kind of intimidating.” Nonetheless, armed with a few pointers from the activists he’d met, “I went straight from the airport to the local pub, got a pint, and opened up Facebook.” The group he started quickly grew, and helped him find others who were doing the same thing.

By January, local officers warmed up. The union considered sending a retiree to one of Feinberg’s hearings.

But Pagel had a better idea. Instead of flying one person somewhere to give two minutes of testimony, he argued, “let’s spend the money to bring Karen Friedman from the Pension Rights Center to the union, and let’s get all of our members up to speed.”

That’s what they did. “It was pretty phenomenal,” Pagel said. “I don’t think I’ve ever seen that many people in our local hall. We kept getting reports that the exit to the freeway was blocked up—we had so many people, they couldn’t get into the parking lot. They had the double doors open because people were lined up outside the building trying to hear.”

Meanwhile in Kansas City, activists found a creative way to get press.

When Epperson first called the Kansas City Star, business reporter Mark Davis was skeptical whether his editor would bite. (Like most newspapers, the Star no longer has a labor reporter.) “I said, ‘You know what, Mark? If you won’t come to us, we’ll come to you,’” Epperson remembers.

A hundred retirees rallied at the paper’s headquarters with campaign T-shirts, signs, flags, and whistles. They delivered Davis a manila envelope packed with their letters from Central States and personal stories.

It worked. The reporter started writing about their fight, and later thanked them for pushing the issue.

Feinberg’s final hearing was held in Kansas City in February. On a week’s notice, 1,000 people turned out—standing room only.

And in April, 2,000 activists from 20 states converged on Washington, D.C. to rally at the Capitol. Twenty senators and reps lined up to declare their support. (You can see footage from the rally, including Sen. Elizabeth Warren addressing the crowd, here.)

The heroes from Houston traveled a grueling 1,400 miles each way, by bus. “It was inspiring and heartwarming to see 70-year-old Teamster retirees with their spouses loading up for what is nothing less than a backbreaking, grinding bus trip,” Pagel said.

After Treasury’s verdict, Central States opted not to resubmit its application, which gives retirees some breathing room. The matter is back in Congress’s hands, and no one expects action until after November’s election.

“I’m sure they’re going to come at us again,” Miller says, “but we have more organization, and people are more aware that Congress has made it possible to cut your benefits. We’re having little local meetings, and we’re ready to jump into action as soon as anything happens.”

“At my age and stage in life,” Pagel says, “it gives me an opportunity to look back. I think the thing that distresses me about the Teamsters membership, and this applies to any union, is that we’ve got this culture of inactivity—just pay your taxes, just pay your dues, and we’ll take care of you.

“What this movement has shown is that, first of all, that’s not true. You pay your taxes, you pay your dues, and they still try to screw you over. The real benefits come when you have an active, engaged membership.”

Who gets elected, of course, will affect the bill’s chances. Activists are working to make the pension fight an issue in congressional and presidential races. “Anybody that is going to be running for a congressional or senatorial seat, oh yes, I want to talk to them,” Miller says, “and I have a big group that is willing to go with me.”

“Bernie has really been carrying the ball for us in his campaign,” said Willie Hardy, retired from Memphis Local 667 and a trustee in a tri-state retiree club. “We think Hillary is going to be on our side, but she hasn’t really brought it up.” As for Trump, “I haven’t heard him say, but just from his actions towards those people out in Vegas trying to organize, I wouldn’t say he’s too favorable toward unions.”

Though the bill’s odds would certainly improve if Democrats won control of the Senate, the campaigners are doggedly nonpartisan. In fact, a UPS worker who’s a Texas Republican managed to get his party on the books opposing pension cuts.

“If you read the Republican platform, it’s just a gumbo of beliefs,” Tim Pagel says. “A lot of them are very anti-worker. But when we go to talk to our congressional reps—which in Texas there’s a good majority of them [who are Republicans]—at least we can tell them this is part of your platform.”

“We’ve tried very hard to work with all of our legislators, regardless of their party,” Wes Epperson said. “It’s only after we’ve been given the cold shoulder that we’ve decided we’re not going to waste our time with that person.”

Take Missouri Senator Roy Blunt, for instance. “Roy has been no help at all. He’s virtually ignored us,” Epperson says. “Of course, Roy Blunt is probably one of the largest corporate-backed senators. His number one contributor right now is Goldman Sachs—and we want Goldman Sachs investigated for their shenanigans with managing our pension funds.” So the activists are backing his rival, Democratic Secretary of State Jason Kander.

Alexandra Bradbury is editor and co-director of Labor Notes.al@labornotes.org
Related
In a Six-Day Strike, Bronx Produce Workers Doubled Their Raise and Inspired New York »
Auto Workers to Vote on Direct Elections »
Brooklyn Teamsters Protest UPS Harassment of Black Shop Stewards »
Can Auto Workers Win the Right to Vote? Here's How Teamsters Did It »
Viewpoint: 'The Irishman' May Win an Oscar, But It Shouldn't Win Union Members' Hearts »