Philly Teachers Go For It 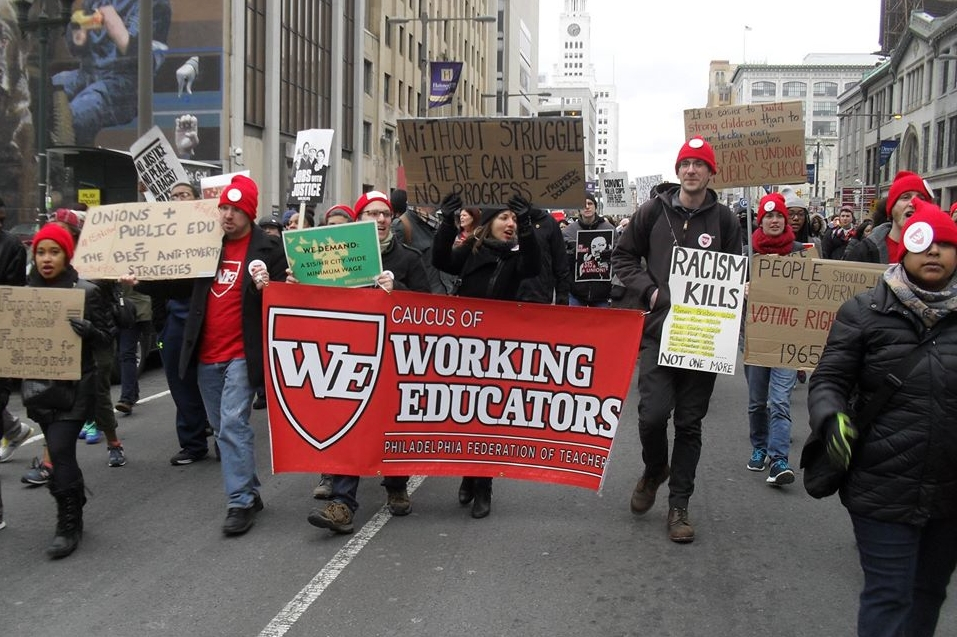 For the first time since the '80s, a full slate is challenging longtime officers in the Philadelphia Federation of Teachers. The Working Educators want to involve members at every level of the union, from solving problems in their schools to planning citywide campaigns. Photo: WE Caucus

In the midst of a stifling heat wave, teachers and allies gathered in the chapel of a West Philly church last September to announce we would challenge the leaders of the Philadelphia Federation of Teachers.

Our caucus, the Working Educators (WE), is proud to be running a full slate in the union’s February election: nine executive officers, 27 executive board members, and 100 delegates to the national and state union conventions.

When we met in 2013 to consider forming a caucus, an election campaign wasn’t on our minds. Most of us just wanted to learn more about union activism and the forces shaping public education in Philly.

Tumult and insecurity ruled. We had just been hit with a wave of school closings, imposed by an unelected board.

WE ignited a campaign last year to inform Philadelphia parents and students about their rights to “Opt Out” of standardized tests, and encourage them to exercise those rights.

We publicly broke the unwritten rule that teachers aren’t supposed to discuss these issues with parents. The district went after us for it, calling teachers in for disciplinary meetings, but we built a coalition that pressured the district into backing down.

Elementary teacher Pamela Roy joined WE because she was looking for solutions to “problems that exist across our district, that do not have easy answers,” she said. “I needed to go beyond my classroom and do more to improve conditions for our students.”

Action was invigorating. But as WE grew, it became clear we’d need to go all the way to the top. Roy is now our candidate for PFT treasurer.

Public schools in Philadelphia—like in most U.S. cities—are in crisis. The No Child Left Behind Act launched an obsessive quest to improve test scores, opening the door to privatization, attacks on teacher tenure and seniority, and school closures. Profit-driven charter schools proliferate.

Since 2001, our district has been controlled by the unelected School Reform Commission (SRC), appointed by the mayor and the governor to oversee the dismantling of our public schools.

The ex-governor slashed Pennsylvania’s education budget by $1 billion in 2011, producing drastic cuts to arts, sports, and music; a shortage of classroom assistants, guidance counselors, nurses, and teachers; and class sizes of up to 60 students.

Things got even worse when the superintendent and the SRC voted in 2013 to shutter 23 schools and lay off 4,000 employees. Some were recalled the following school year, but seniority rules were ignored, schools were disrupted, and many staff left the district altogether.

Union leaders have been in sporadic contract negotiations with the district since 2012, and members’ pay has been frozen. There’s only been one meeting since April. And in 2014, the SRC tried to cancel our contract unilaterally, to force teachers to pay health insurance premiums and take pay cuts. The union is still challenging this in court.

Since the 1980s, a slate called the Collective Bargaining team has led the PFT. President Jerry Jordan took office in 2007, having left the classroom in the 1980s to work full-time for the CB leadership.

The CB team has never made it a priority to involve members. Even for stewards (Building Representatives), there are virtually no trainings or workshops on basic organizing skills. Bully principals wreak havoc with impunity.

Some schools don’t even have a Building Committee, a group of members that’s supposed to meet with the administration monthly to address staff concerns.

In the face of the ongoing attacks, our union leaders vacillate between passive and defensive. Their plan is endless court battles and campaigns for local and state elections. Members are out of the loop.

Before WE got started, some of us had known each other for years as activists in the Teacher Action Group, which focused on curriculum and education policy. The group had tried to work with PFT leadership, proposing campaigns and actions to engage members—only to get shot down.

We formed the caucus because we wanted to strengthen our union by getting teachers involved—and we realized we’d have to do it without the help of the current leadership.

For inspiration and guidance, we looked to the Caucus of Rank-and-File Educators, which had transformed the culture of the Chicago Teachers Union. Al Ramirez of CORE joined us for a weekend meeting.

We also drew on a “Social Justice Unionism” study group, held each spring from 2012 to 2014, which brought together educators, community allies, and union activists to study books by Lois Weiner, Jane McAlevey, and Labor Notes. In those discussions, “the energy and urgency in the room was electrifying,” said WE Co-Chair Kelley Collings.

WE and TAG went on to organize summer book groups in 2014 and 2015, studying racism, standardized testing, the corporate takeover, and the history of teachers unions.

Our candidacy began with a citywide “Listening Campaign” to form our platform, find more candidates for the slate, and bring out leaders.

Through the fall we held listening sessions at schools, bars, restaurants, and people’s homes. Union members from over 100 schools participated. We asked everyone three questions:

WE’s Election Committee reviewed all the feedback to find recurring themes. Many members felt that union leaders don’t communicate with the rank and file, that union meetings are top-down and undemocratic, and that the union has no clear strategy.

Members also said that shortages of staff and materials make it nearly impossible to do their jobs, and that the current leaders haven’t done enough to save nurses’ and counselors’ jobs.

Our conversations reaffirmed one of the most important things we knew: that members need to organize. That means learning to solve problems together in individual schools, and taking a role in planning school-wide and citywide campaigns.

Our union must build genuine alliances with parents, students, and community groups—not just occasionally calling on a parent to speak at a rally, but working side-by-side for common interests.

WE members have already begun forming these kinds of relationships. We’re linking up with members of other groups to organize forums on Opt Out, join Fight for 15 rallies, and strategize for meetings of the School Reform Commission (our unelected school board).

Members have gotten to know many parents through our book groups too. In fact, the WE caucus welcomes supporting members who aren’t members of PFT, including parents, retirees, teachers in training, and non-public school teachers.

The union also needs to fight structural racism and the root causes of poverty. Nearly half the students in Philadelphia live at or near the poverty level, and most are Black or Brown.

Ten years ago, nearly half the teachers in Philadelphia were African American. Today, less than 25 percent of teachers are non-white. Schools in low-income, Black, and Latino communities have been especially hard-hit by closings.

History puts students of color at a disadvantage in a thousand ways—and then schools can reinforce it. Our union needs to push the district to attract and retain teachers of color; stop using testing to close schools; fairly fund every school; resist the school-to-prison pipeline; and develop inclusive curricula and teaching methods.

WE is continuing to make contacts at the district’s 228 schools. We go to schools before and after work to hand out campaign literature and talk with members about the union’s future.

After-school “Who Are WE?” sessions happen daily at schools, coffee shops, bars, and restaurants. WE members ask our friends and colleagues to invite their friends. At the meetings, we elicit anger, provide hope, and engage people in our plan to fix our district’s problems.

Though the campaign is gaining momentum daily, it hasn’t been free of conflict. This is the first time since the 1980s that a full slate has challenged our union officers.

Mail ballots for the election go out February 4, and are due back by February 23. But as of this writing, the current leaders have yet to announce to members that there’s an election. In at least 21 schools, WE members have been denied equal access to buildings and mailboxes for campaigning.

We’re laying the groundwork not just to win the election, but also to transform the PFT into a member-driven union that can finally organize to combat the powerful forces working against us.

“I became a teacher to help students discover their own power to transform our world,” said high school Spanish teacher Max Rosen-Long, the caucus’s membership chair, “and my work with WE has taught me that my colleagues, neighbors, and even myself have that same power.”

A version of this article appeared in Labor Notes #443, February 2016. Don't miss an issue, subscribe today.
Related
As Omicron Rages, Teachers and Students Fight for Safety Measures in Chicago and Elsewhere »
Troublemakers Schooled in Detroit and Philly »
Teachers Strike against a ‘Heartless’ School Board in Biden’s Hometown »
How Oakland Teachers Took Control of Our Return to School »
Jordanian Teachers Union Leaves Behind Legacy of Wins »