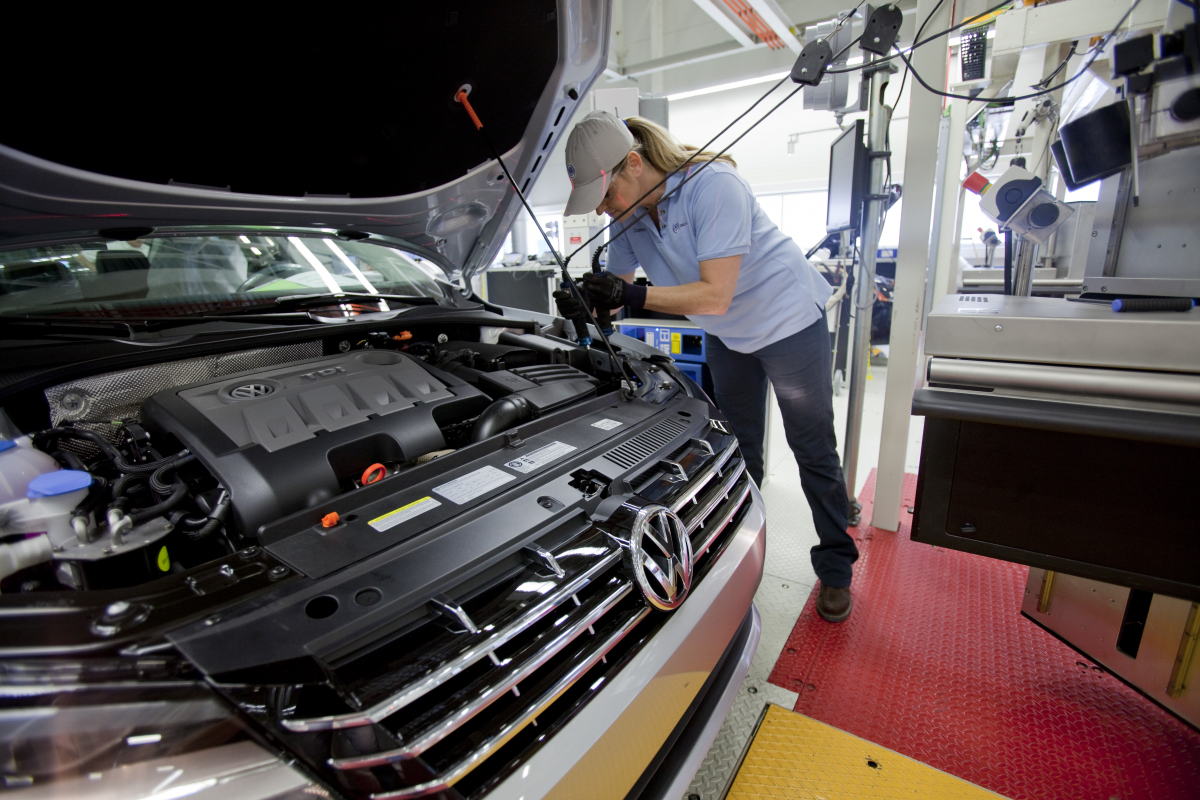 A "micro-unit" of skilled-trades workers at the Volkswagen plant in Chattanooga, Tennessee, has voted to join the Auto Workers. But while celebrating the victory, some pro-union workers in the plant have begun to question the UAW’s management-friendly approach to organizing here. Photo: VW.

Skilled-trades workers at the Volkswagen plant in Chattanooga, Tennessee, have won union recognition by a vote of 108 to 44. The 162 workers in this so-called “micro-unit” will be represented by the Auto Workers (UAW).

It’s the first time that the union has won certification at a foreign-owned automaker in the U.S. South. The company says it plans to appeal, arguing the micro-unit shouldn’t be allowed.

But while celebrating the victory, some pro-union workers in the plant have begun to question the UAW’s management-friendly approach to organizing here.

It’s nearly two years since the UAW lost an election to represent the factory’s entire hourly workforce of about 1,500 production and skilled-trades workers. After the loss, the union chartered a “members-only” union, Local 42—whose activities so far boil down to meeting with management to ask for union recognition.

In the first election drive, the union and the company presented a united front, trumpeting a labor-management cooperation plan modeled on the German system of “works councils.” The UAW has only doubled down on this rhetoric since, though the company has turned hostile.

The union recently opened a joint office with IG Metall, Germany’s largest trade union, in the nearby town of Spring Hill. The “Transnational Partnership Initiative” between the two unions, according to a press release, aims to “explore new models of employee representation in the United States” and “expand on the principle of ‘co-determination’ between management and employees by establishing German-style works councils or similar bodies to promote employee representation.”

“My co-workers don’t give two shits about a works council. Most don’t even know the functions of a works council,” said one worker, who’s been at the company three-and-a-half years. (All the current employees I reached would speak only on condition of anonymity, because of VW’s strict media ban.)

“What they care about are solutions to the problems we face daily, like line speeds, break times, overloaded pitches. Those are things needing immediate actions,” the worker said. A pitch is a segment of the assembly line in which a worker is responsible for performing a specific series of tasks in a set amount of time.

MARCH ON THE BOSS

Tensions came to a head on one Chattanooga assembly line in early November. The line was already understaffed—and then workers noticed that over two days, it had been sped up.

“When the car carrier enters your pitch, there is a timer that counts down seconds, so you know exactly how many seconds you have to do the job,” a worker said. “Now, usually our time is 110 seconds... These two days it was down to 99 seconds.

“That doesn’t sound like a lot, but when every second is accounted for in the pitch, it means everything.”

Volkswagen’s Chattanooga plant relies on the brutal productivity-maximizing scheme known as “lean production.” Better understood as “management by stress,” this system invented by Toyota pushes workers to their physical and emotional limits. The ones who can’t handle the pressure are removed and the process repeats endlessly.

Workers timed the line so they could prove it was moving too fast. Then they went as a group to confront the manager in the Human Resources department.

“We walked into their office about 12 deep to let them know what was going on,” said one worker.

H.R. was caught off guard. So were the assembly line supervisors and managers who’d been bypassed. The next morning, an industrial engineer was sent to correct the line speed.

“Our supervisor got his ass slapped hard,” said a worker. “He walked down the line and talked with each person to explain himself.”

“We definitely found a way to get things done when we need them,” said another worker. “We decided that’s our route from now on—if we need something, it’s directly to [management].”

This self-organized collective action contrasts with the inactivity of Local 42. The union has trained no shop stewards. It doesn’t represent workers in disciplinary meetings. It has no organized presence on the shop floor.

When a group of workers suggested an in-plant petition to change the grueling 10-hour shifts—which rotate between night and day, so that workers are always fatigued—the idea was dismissed outright by UAW staff. Later, Local 42 organized a survey of members, but the results weren’t publicly shared and nothing came of it.

“We felt the local takes direction from the International,” said a worker. “Our goal is to let our rank and file know that this is our union, and we control it.”

Former VW employee Justin King has no patience for the company’s claims that its managers were ever neutral on unionization.

“They can say whatever they want in media reports,” he said, “but the feeling on the factory floor was one of fear, that people were losing their jobs just because they supported a union.”

King started working for VW in 2010, when the plant was still under construction. It didn’t take long before he saw the need to organize.

“After I’d been at Volkswagen for a few months, I began to notice what I perceived were unfair actions on the part of management,” he said, “arbitrary work demands, blatant favoritism, and a variety of comments that seemed to be designed to keep the employees in a constant state of fear.”

King reached out to the UAW, met with its international representative, and became highly active in the organizing drive. He was featured in its materials. He advocated for the union in the plant and on local radio shows, and even appeared on MSNBC.

According to King, his union activism soon put him on the radar of an anti-union supervisor who’d been transferred to his work area.

“Within a few weeks, she had found out about my union allegiances, and began harassing me at every opportunity,” he said. “She made it plain, in a private conversation, that she wanted to get me fired because of my union affiliation, and wouldn’t stop until she succeeded. This established a pattern for the next four years.”

King was eventually fired for allegedly using his cell phone on the factory floor—a claim he said “was completely fabricated by my supervisor, and for which no witnesses nor any physical or digital evidence were provided.”

Unfortunately, he got no help from the International or the leadership of Local 42. “I talked to them, and they said they’d bring it up,” he said, “but I never got a follow-up, despite checking back with them several times.”

King is still proud of his leadership in the union campaign. “Most of my co-workers knew that if they had a question about the UAW, I was the person to go to,” he said. “I hesitate to say anything negative about the UAW—but I don’t feel that they made my case a priority, and they may not have even brought it up at all.”

He believes the union’s continued focus on allying with the company is hurting its credibility with workers.

“I paint the UAW as the person in an abusive relationship,” he said. “Even though there’s a clear pattern, they just kept hoping that this time will be different.”

Chris Brooks is a graduate student in the labor studies program at the University of Massachusetts, Amherst, and an organizer living in Chattanooga.