As Cadillac Tax Threat Looms, How Can Unions Respond? 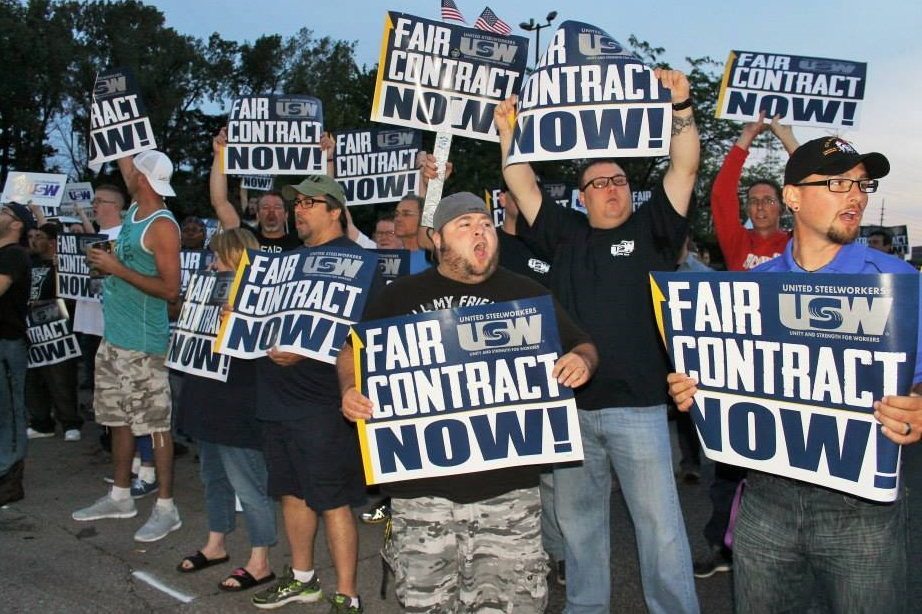 The "Cadillac tax" on health care plans is accelerating employers' usual demands to cut costs on the backs of workers. Photo: USW.

Your employer has already brought it up in bargaining, or else is about to: the health care headache known as the “Cadillac tax.” How hard are unions getting hit—and what can we do about it? Labor Notes interviewed Mark Dudzic, coordinator of the Labor Campaign for Single Payer, which just issued a new report on the tax. Download it at laborforsinglepayer.org.

Labor Notes: What is the Cadillac tax?

Mark Dudzic: The Cadillac tax is a provision in the Affordable Care Act (ACA) which will take effect January 1, 2018. It will place a 40 percent marginal tax rate on employee health benefits that cost more than $10,200 for individual coverage or $27,500 for family coverage. (These numbers vary slightly for certain occupational and age groups.) The limits will adjust upward every year by the average increase in the cost of living.

How many plans will the tax affect?

We think ultimately it’s going to affect all plans, because it adjusts annually based on the Consumer Price Index—whereas medical costs usually increase two or three times faster. Medical inflation has been lower than the overall CPI only one year in the last 50.

So in the end all plans will be affected, unless they’re radically restructured to cut benefits. Right now the estimates are that, in 2018, 48 percent of large-employer plans will be subject to the tax.

Why is it called the Cadillac tax?

The name was designed to give the impression that these were privileged benefits—that it’s this greedy class of workers. It’s a nasty term, with racial overtones harking back to the old “welfare Cadillac.” It really denotes Chevy benefits that ordinary working people have a right to expect.

What types of plans will the tax affect immediately?

They tend to have low deductibles and low copays—standard plans that unions have negotiated over the years. A typical good union plan these days might have a $500 annual deductible, and $10-$20 copays for pharmaceuticals, doctor visits, and other services.

It’s all happening very quickly. Contracts we’re negotiating now will be subject to this tax in 2018. The tax is one of the issues in the big Allegheny Technologies lockout, and in the unsettled steel contracts at U.S. Steel and ArcelorMittal.

How are employers responding?

First of all, they are accelerating their usual demands to cut costs on the backs of workers. But making workers pay a higher percentage of premiums does not help avoid the tax, since it’s based on the full cost of benefits. So the most common proposal these days is to move to high-deductible, “consumer-driven” health plans.

More recently, they’ve woken up and seen that this tax is not a good thing—both for them as employees (executives’ own generous benefits would be subject to it) and as employers who use health benefits to recruit workers.

So there’s been a growing outcry by business. Even the national Chamber of Commerce is calling for repealing the tax.

Yes. A lot of public employers have been somewhat slower to understand the impact, but they’re starting to wake up. For example, an association of municipal groups in Washington state just calculated their member cities would have to raise an additional $76 million to cover the tax.

Mark Dudzic: Some benefits consultants are encouraging wellness programs as a means of cutting costs. But often they’re not geared toward promoting good health. They’re geared toward punishing employees who might be unhealthy because they’re older, or because they do shift work or other work that’s not good for you.

So we always urge unions to be careful about jumping into these wellness schemes. When you let the employers control them, they become the opposite—encouraging workers to report unhealthy behaviors among their fellow workers.

What advice do you have to unions bargaining over health care?

It’s important to verify the claims an employer is making. Make sure they aren’t rolling into their estimates costs that shouldn’t be included, like life insurance or freestanding dental and vision.

I’m willing to bet that employers are exaggerating costs at the bargaining table, especially in self-insured plans where it’s easier to fudge the numbers. Unions have to request detailed information.

I know of a few recently settled contracts where the unions preemptively agreed to re-bargain their health benefits down before 2018, if the tax isn’t repealed. Is this a good strategy?

It’s better than the Boeing strategy. That’s the worst possible outcome: language that says the company has the right to make any changes it deems necessary to avoid the tax, and in the event it still has to pay, the cost will be transferred to the workers.

The best alternative is the Longshore Workers (ILWU) contract—where the employer agrees to pay all the costs of the tax.

Then you have these middle-ground alternatives, where unions and employers agree at least to reopen. When you have not pre-agreed to any concessions, it gives you more ability to bargain.

There are some creative things you can do at the table. Theoretically you could trade off lower copays for a higher deductible—so that no more money would leave a worker’s pocket over the course of a year—to avoid the tax.

United Electrical Workers has a toolkit and Powerpoint on the ACA and health insurance bargaining, including sample member surveys, excise tax calculators, and advice on how to replace any lost value from health care elsewhere.

The Communications Workers also have a cheat sheet for health care bargainers, plus sample information requests.

But ultimately these are stopgap measures. Unless we take health care off the bargaining table, these costs are going to keep coming back.

Of course, any reopener that just allows the boss to implement a final offer without the right to strike—or, at the very least, submission to binding arbitration—isn’t really worth the paper it is written on.

Some economists argue that cuts in benefits will be made up for by increasing wages.

In fact the opposite is occurring. Over the past few decades, as health care costs have increased, most groups of workers have given up or moderated their wage increases in exchange for preserving benefits.

To think, given current power relations, that workers are going to be able to recover any cuts through higher wages is just absurd.

What does Labor for Single Payer propose?

In the short term, we join with most of labor in calling for the repeal of the tax. If the government just wanted a tax to provide additional funding—which is needed for some programs under the ACA—there are plenty of targets they could go after, like the obscene profits of pharmaceutical companies and the obscene salaries of executives in both for-profit and non-profit health care.

In the long run, we’ve got to take health care off the bargaining table and make it a right for everyone. Treat it like Medicare, have a single-payer, universal system, progressively financed—everybody in, nobody out.

Even if we repeal this Cadillac tax we’re not going to cut the health care cost curve, which is accelerating at two, three, four, even five times the rate of inflation. The only way to cut that is to attack the huge waste and inefficiencies in the system.

Have the ACA and the Cadillac tax caused unions to change their position on single payer?

Five years in, a lot of unions are realizing the ACA hasn’t solved our problems—and in some cases is making them worse, like with this tax.

There’s a renewed openness to single payer, reflected in discussions from the AFL-CIO executive council down to local unions. We’ve been talking to groups like the Brotherhood of Maintenance of Way Employees in the railroad industry, which is facing some hard bargaining, about connecting their fight to the broader fight to win health care for everyone in America—which is the only way to win public support.

We have to reframe these issues in a way that the general public, many of whom have already lost their benefits, can relate to. Contract negotiations are among the most important teaching and mobilizing moments. We urge unions to use these opportunities to connect the fight for a decent contract with the fight for health care for all, rather than thinking we can handle this problem by inside politics and elite negotiations.

Some unions want Congress to repeal the tax before it goes into effect. Is that realistic?

I would give it a 50/50 chance. It’s a strange-bedfellow phenomenon. You’ve got these Tea Party folks who support any cuts in government funding, and you have business, and you have a near-unanimous labor opposition.

What strategy do you advocate for repealing the tax?

We need to avoid forming alliances of convenience with our political enemies and abandoning our natural allies. While we’re fighting to repeal the Cadillac tax, we need to be building alliances with other working-class organizations concerned about access to health care.

There’s still an ongoing fight in 19 states to accept federal funds to expand Medicaid. We should find a way to link up with them, rather than with the Chamber of Commerce. We’re going to need those folks—because the Chamber, the Tea Party, the Republicans, they don’t really believe in the idea of social insurance. The political decisions we make now will determine how strong our movement emerges over the longer term.

A version of this article appeared in Labor Notes #440, November 2015. Don't miss an issue, subscribe today.