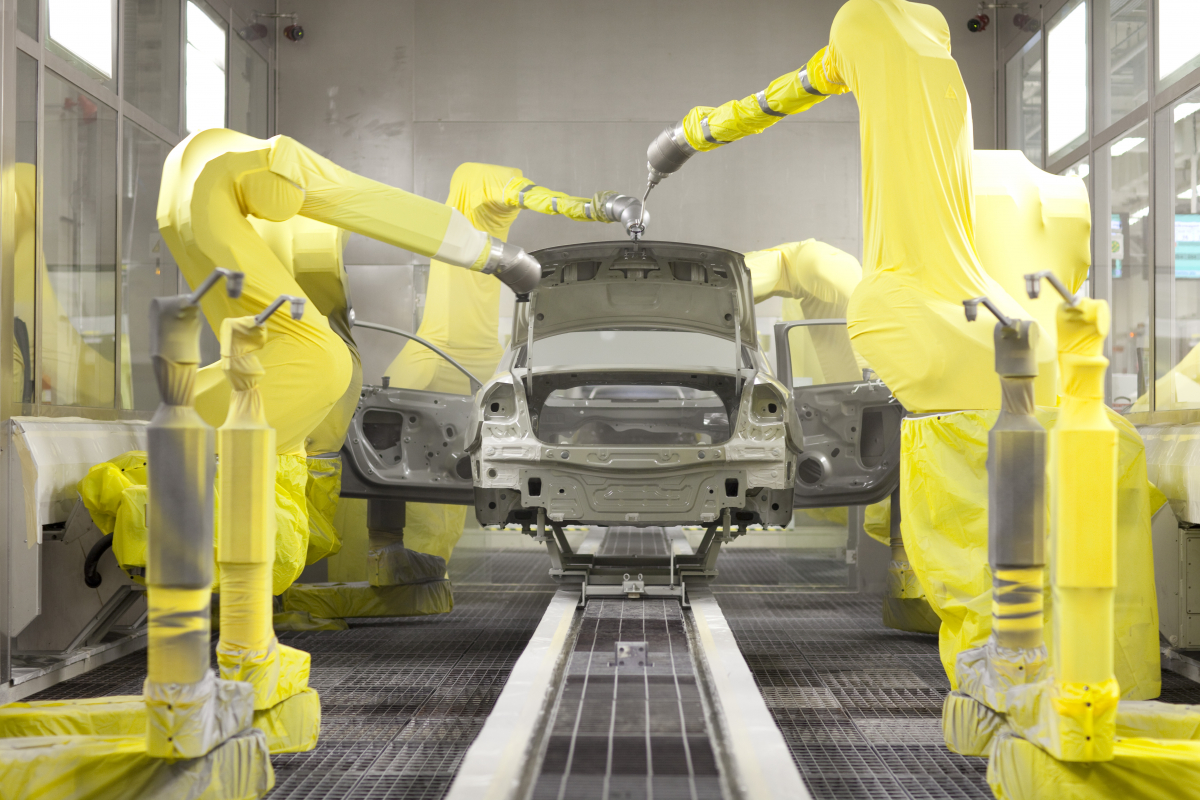 In Chattanooga, Tennessee, the Auto Workers have filed to represent a "micro-unit" of skilled-trades workers who maintain the plant's robots and conveyors. But management's gotten less friendly. Photo: Volkswagen.

At mandatory pre-shift meetings at Chattanooga’s Volkswagen plant October 26, workers were met with a surprise “special communication” from senior management expressing the company’s dissatisfaction at their filing for a union election.

The letter came three days after United Auto Workers Local 42 announced that it had filed paperwork with the National Labor Relations Board for a secret-ballot vote to represent the maintenance unit (also known as skilled trades).

Skilled-trades workers maintain the plant’s robots and conveyors. The group includes 165 people—a small subset of the 1,550 hourly employees who narrowly voted down the UAW in an internationally scrutinized election in 2014.

The UAW has requested that elections be held as soon as November 5 and 6. The Labor Board’s streamlined process has recently sped up the scheduling of unionization votes.

“The company finds the timing of this development unfortunate, given the challenges we are facing as a plant, Brand, and Group,” said the letter signed by Christian Koch, chairman and CEO of VW’s Chattanooga operations, and Sebastian Patta, executive vice president of human resources.

“Nevertheless, we will respect our employees’ right to petition and vote and will remain neutral throughout the process.”

The letter stressed that, unlike the previous election, “there is no Election Agreement between the UAW and Volkswagen” and, according to the company, “there is no clear path to a Works Council representing all employees from a bargaining unit representing only the maintenance team.”

‘A SLAP IN THE FACE’

This “special communication” contrasts sharply with the tone of an earlier letter to workers, signed by Patta and former Chattanooga CEO Frank Fischer back in 2013.

“In the U.S. a works council can only be realized together with a trade union,” the earlier letter read. “This is the reason why Volkswagen has started a dialogue with the UAW in order to check the possibility of implementing an innovative model of employee representation of all employees.”

A works council is a corporate board made up of management and worker representatives in equal numbers. Its members collaborate to decide production goals, working conditions, grievances, and other issues that impact the day-to-day operations of their plant. The Chattanooga plant is the only factory in the Volkswagen Group to have no formal workers’ representation through a union or works council.

Some pro-union Volkswagen workers, speaking on condition of anonymity, were furious at what they perceived to be a U-turn by executive management.

“The company says they are neutral, but their own statement says the timing of the union election is ‘unfortunate.’ That isn’t neutral language!” said one.

“They could have avoided issues of timing or legal questions about the works council by recognizing the union two years ago. They still could. It is that easy. Then we wouldn’t be having this conversation at all.”

Another worker described the letter as “a slap in the face of the UAW.”

The union is seeking to avoid a repeat of last year’s election, where out-of-state organizations such as Americans for Tax Reform spent enormous sums of money fighting the union.

A few months after the election loss, the UAW announced the formation of Local 42, a “members-only” union, and began signing up and swearing in members who work at the plant. A majority of Volkswagen’s hourly production workers have since signed membership cards.

This May, Local 42 presented Volkswagen with a “vision statement for a collectively bargained works council,” including a detailed outline of the legal framework and steps for establishing a works council under federal labor law. UAW Secretary-Treasurer Gary Casteel asked the company to voluntarily recognize the union as the hourly workers’ exclusive bargaining representative.

“This has been the strategy for the UAW the entire time,” said one Local 42 member: “voluntary recognition from Volkswagen, using the works council as leverage.”

But that didn’t happen. So the UAW has moved forward with a strategy to file for elections in so-called “micro-bargaining units” in the factory.

Since its Specialty Healthcare decision in 2011, the Labor Board has looked more favorably on petitions for union elections in small, narrowly-defined bargaining units.

Workers have won union elections for micro-units representing the cosmetics department of a Macy’s store, truck drivers at a FedEx Freight terminal, and pharmacists and pharmacy technicians in a Target pharmacy. Local 42 hopes its Volkswagen maintenance unit will be next.

BOTH SIDES OF THEIR MOUTHS

Governor Bill Haslam closely mirrored the company’s language in his statements to the press today, saying the “timing isn’t great” for the union filing.

“Obviously, Volkswagen is struggling with a lot of issues right now,” Haslam said, according to the Chattanooga Times Free Press. “It feels like to me the right time is for everybody to focus on addressing issues that VW has had and then turning around to producing great cars.”

Volkswagen previously came under fire from Tennessee lawmakers for allegedly being too labor-friendly. In the lead-up to the 2014 vote, State Senator Bo Watson—whose district includes the plant—joined other leaders of the legislature’s Republican supermajority in threatening to deny Volkswagen millions of dollars in subsidies and tax abatements if workers voted the union in.

Watson has kept up the attack. During a Senate Commerce Committee meeting last summer he derided the company as a “magnet for organized labor, intentionally.”

Local labor supporters believe Volkswagen is especially vulnerable to such pressure from Republican politicians now, in the wake of revelations that it installed software on millions of diesel-powered cars that allowed them to “defeat” emission tests while pumping pollution into the atmosphere at up to 40 times the legal rate.

In the fallout from the scandal, Volkswagen’s stock value has dropped more than one-third, governments around the world are conducting formal investigations, and the company is facing massive recalls, hundreds of lawsuits, and regulatory fines.

‘NOW MORE THAN EVER’

“If the potential that working people might be organizing becomes too real, Republicans will not hesitate to use the emissions issue to pressure Volkswagen to keep the union out,” said Beth Foster, co-director of the Mercy Junction Justice and Peace Center, a faith-based organization that supports worker rights in Chattanooga.

“State officials have proven over and over that they not only do not care about working-class people,” Foster said, “but that they will stoop to about any level to keep them from organizing together to better their conditions.”

Some workers believe their chance of winning the election is greater this time around, because their co-workers know a collective bargaining agreement could provide a layer of protection against potential fallout from senior management’s criminal activities.

“Workers at Volkswagen certainly need a union in order to have a voice in the event of cuts or layoffs,” said one worker. “The maintenance [skilled trades] guys know that they need a union now more than ever.”

Chris Brooks is a graduate student in the Labor Studies program at the University of Massachusetts, Amherst, and an organizer living in Chattanooga.

Related
Who Corrupted the Auto Union? Criminal Employers Did »
Letters: Volkswagen and the United Auto Workers »
Volkswagen Declares Mission Accomplished »
Beware of the 'Easy' Way »
Why the UAW Lost Again in Chattanooga »