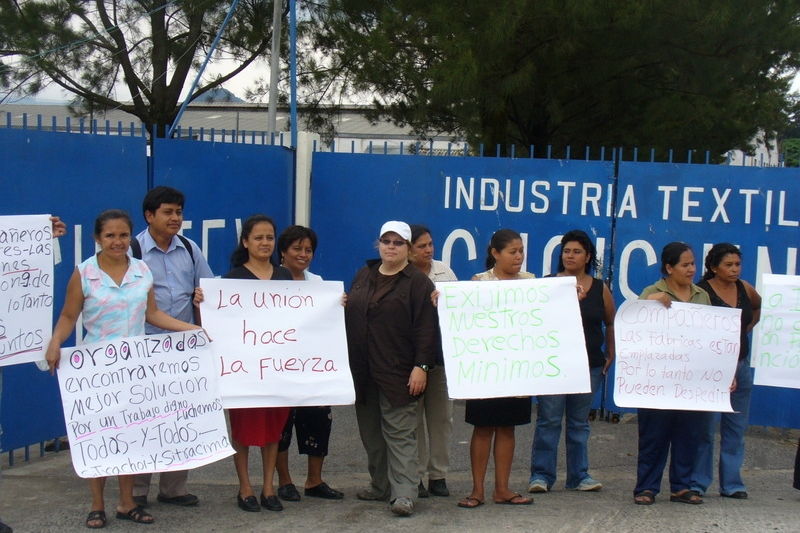 In December, an arbitration panel will issue its ruling on a complaint brought by the U.S. under the Central American Free Trade Agreement (CAFTA) against the Guatemalan government for failing to effectively enforce its labor laws. Photo: STITCH.

The U.S. and 11 other nations reached an agreement October 5 on the final text of the Trans-Pacific Partnership, a massive trade agreement that will cover two-fifths of the world’s economy.

Once President Obama gives notice of his intent to sign it, Congress will have at least 90 days to review the text before voting it up or down, without amendments. The earliest a vote could take place is January, though many predict there won’t be a vote until April.

The TPP has been much criticized by unions, who say it does little to protect jobs and advances the rights of investors and corporations at the expense of workers and the environment.

As with all the previous trade deals, the president is making lofty claims about this one. Obama says the TPP will “[open] new markets to American products while setting high standards for protecting workers and preserving our environment.”

But to see through the hollow rhetoric, you just have to look at the example of the first-ever labor case brought under a free trade agreement—which is about to wrap up, likely in the midst of the TPP debate in Congress.

In December, an arbitration panel will issue its ruling on a complaint brought by the U.S. under the Central American Free Trade Agreement (CAFTA) against the Guatemalan government for failing to effectively enforce its labor laws.

It’s taken years to bring just one case this far, and the potential penalty is a mere slap on the wrist.

It’s been seven years since the AFL-CIO, together with six Guatemalan unions, first submitted a complaint to the Department of Labor. They accused Guatemala of failing to protect workers’ legally guaranteed rights—to association, collective bargaining, and acceptable conditions—by not conducting inspections, registering unions, or ensuring compliance with court orders.

Only 2 percent of Guatemala’s working population belongs to a union. It has become one of the most dangerous countries in the world for union activists. The AFL-CIO reported that 72 Guatemalan unionists had been murdered since CAFTA went into effect, as of August 2014, with near-total impunity for their assassins.

The slow pace of the CAFTA case is “a huge detriment to workers in Guatemala,” said Stephen Wishart, Central America director for the AFL-CIO Solidarity Center. “Their rights are being violated in the same ways that were presented back in 2008.”

The delays have simply given the Guatemalan government an opportunity to “put make-up on the problems,” said Homero Fuentes, of a Guatemalan labor standards monitoring organization called COVERCO.

After deciding to accept the case, the U.S. held consultations with the Guatemalan government, but failed to reach an agreement. In 2011 the U.S. requested the establishment of the arbitration panel, which is supposed to protect workers’ rights under CAFTA.

The panel was finally constituted in 2012—but was put on hold six months later, when Guatemala signed an Enforcement Plan, agreeing to add more labor inspectors and increase the Ministry of Labor’s budget for enforcement.

But Guatemala failed to act on most of the plan. Finally last September, the U.S. requested that the panel be reconstituted. The first hearing was held in June.

“A lot of people would argue that the timing of that is not coincidental—we’re in the middle of a huge trade debate,” said Cassandra Waters, a Global Workers Rights Fellow at the AFL-CIO.

Anti-union violence isn’t among the complaint’s charges. The U.S. government argues that’s a problem that falls outside the scope of free-trade pacts.

The AFL-CIO disagrees. “There’s nothing in these agreements that prevents them from taking up violence,” said Waters. “Guatemala is required to enforce its laws related to freedom of association—and that would include investigating murders of trade unionists.”

The violence, coupled with other failures to enforce labor law, make it extraordinarily difficult for Guatemalan workers to form unions.

For example, according to Fuentes, there are unions in only three of the country’s more than 160 garment factories. Forty percent of total Guatemalan exports go to the U.S.—and 94 percent of garment exports—are destined for the U.S. market.

Guatemala, the largest economy in Central America, is the U.S.’s largest banana supplier. It also exports hundreds of millions of dollars of coffee, apparel, and gold each year.

The basis for the complaint is a CAFTA provision that the parties may not repeatedly fail to enforce labor laws in a way that affects trade.

It cites palm oil plantations where workers allege they were paid $5 dollar a day—half the legal minimum—and suffered burns when they were forced to fumigate fields without protection.

It also refers to workers in a number of industries who were illegally fired for organizing on the job, and who have waited years to get their jobs back.

A major stumbling block to labor law enforcement is that the Guatemalan Ministry of Labor’s cannot legally fine employers. Instead it must go through the courts, which delays sanctions.

And even then, employers often ignore court orders, and the government stands by.

The panel has three members, chosen from a roster established under CAFTA. Each party chooses one member, and the two sides pick a chair together. Guatemala chose a constitutional law scholar who, according to some activists, has close ties to the private sector.

“For us, this is a first negative decision of the arbitral process, since as we understand it the arbitrators should be suitable, honorable, and independent professionals,” said Mirna Nij of the Union of Workers in the Informal Economy (Sindicato de Trabajadores de la Economía Informal). “We believe this lawyer does not have these characteristics.”

If the panel finds against Guatemala, it will face a fine of up to $15 million a year. This money would go into a fund dedicated to strengthening the country’s labor institutions.

“The best-case scenario is that Guatemala pays a fine to itself—which isn’t a very effective deterrent,” said Waters.

And as José Pinzón, of the Central General de Trabajadores de Guatemala, points out, “It won’t be the government, or the business sector, who will pay it—it will be the more than 15 million Guatemalans who have to pay it.”

Still, Waters said, “the fact that the U.S. chose to take Guatemala to arbitration is good, because we should be taking these commitments seriously.”

Provisions do exist that would allow the U.S. to suspend some trade benefits, but only if Guatemala fails to pay the fine.

TRUST US THIS TIME

Since CAFTA, U.S. free-trade agreements have made some advances, including an enforceable obligation to adopt and maintain basic principles recognized by the International Labor Organization: freedom of association, the right to collective bargaining, the effective abolition of forced labor and child labor, and the elimination of employment discrimination.

“There have been significant improvements about what rights [newer trade agreements] govern,” said Waters. “But the actual reality about whether those laws are enforced hasn’t gotten any better.”

The Obama administration promotes the TPP as “the most progressive trade bill in history,” with the highest labor standards yet.

But as a report from Sen. Elizabeth Warren’s staff pointed out, similar promises have been trotted out to justify every free-trade agreement from NAFTA on.

For example, in 2005, U.S. Trade Rep. Rob Portman said CAFTA “has the strongest labor and environmental provisions of any trade agreement ever negotiated by the U.S.”

Wishart argues that in all these agreements, the “mechanisms are weaker than what existed under the Generalized System of Preferences,” which provides preferential tariff treatment to developing countries and applied to Guatemala prior to CAFTA.

The GSP is still in effect for countries not covered by a trade agreement, like Bangladesh, which had its preferential tariffs revoked in 2013 after 1,129 factory workers were killed in the Rana Plaza disaster.

This U.S. action “immediately triggered some reforms,” Wishart said—unlike the CAFTA process that has allowed Guatemala to drag its feet for years.

A Government Accountability Office report last year found that the U.S. is systematically failing to monitor and enforce compliance with the labor provisions in its free trade agreements.

The agency highlighted the same problem in a similar report five years earlier.

In all five cases where the Department of Labor has accepted submissions alleging violations of labor provisions in free-trade agreements, it’s missed its 180-day timeline to review them. The average lateness: nine months.

Most recently, it took over three years to review a submission from the AFL-CIO and Honduran unions alleging a systematic failure by the government of Honduras to enforce its labor laws.

Department of Labor officials expect that the TPP—which includes serial labor-rights violator Vietnam, where it is still illegal to form an independent union—will strain their resources even further.

Most of the leverage on labor rights, Waters feels, comes before an agreement is signed. “Guatemala’s an excellent example of a country that wasn’t even compliant with CAFTA requirements when it came into force,” she said.

“The idea that these agreements are going to raise labor standards is completely false. There’s been no improvement on labor rights in Guatemala—if anything things have gotten worse.”

Some Guatemalan activists think unions should play a stronger role in monitoring compliance with any obligations in free-trade agreements. Fuentes said more official resources could have been allotted to Guatemalan labor to document what was happening to workers. He said a type of union-run monitoring board could have been set up.

That certainly sounds like a more effective approach than relying on the Guatemalan government, widely regarded as one of the most corrupt in the hemisphere. The country's president and vice president were both recently forced to resign in a massive corruption scandal, and are now in prison awaiting trial.

In November, the International Labor Organization will decide whether to establish a Commission of Inquiry—its highest form of supervision—to investigate Guatemala’s systematic violations of workers’ rights.

A version of this article appeared in Labor Notes #438, September 2015. Don't miss an issue, subscribe today.

here's a compelling pro-TPP argument i don't think got debunked yet:
http://www.thepeoplesview.net/main/2015/4/24/trade-fight-with-president-...

So let's get this straight.

Murder's don't count. The process takes 8 years. The ultimate remedy is ineffective, and our negotiators take pride in what a swell deal this is.

Global companies made out great - they pay wages below the minimum allowed by law in Guatemala. Our trade negotiators granted Guatemala and other countries preferential access to our markets, KNOWING at the time that those countries failed to meet minimum international standards for labor rights.

Maybe Donald Trump is right. We sent the wrong negotiators in to make this deal!!!