Support for Sanders Grows in Unions 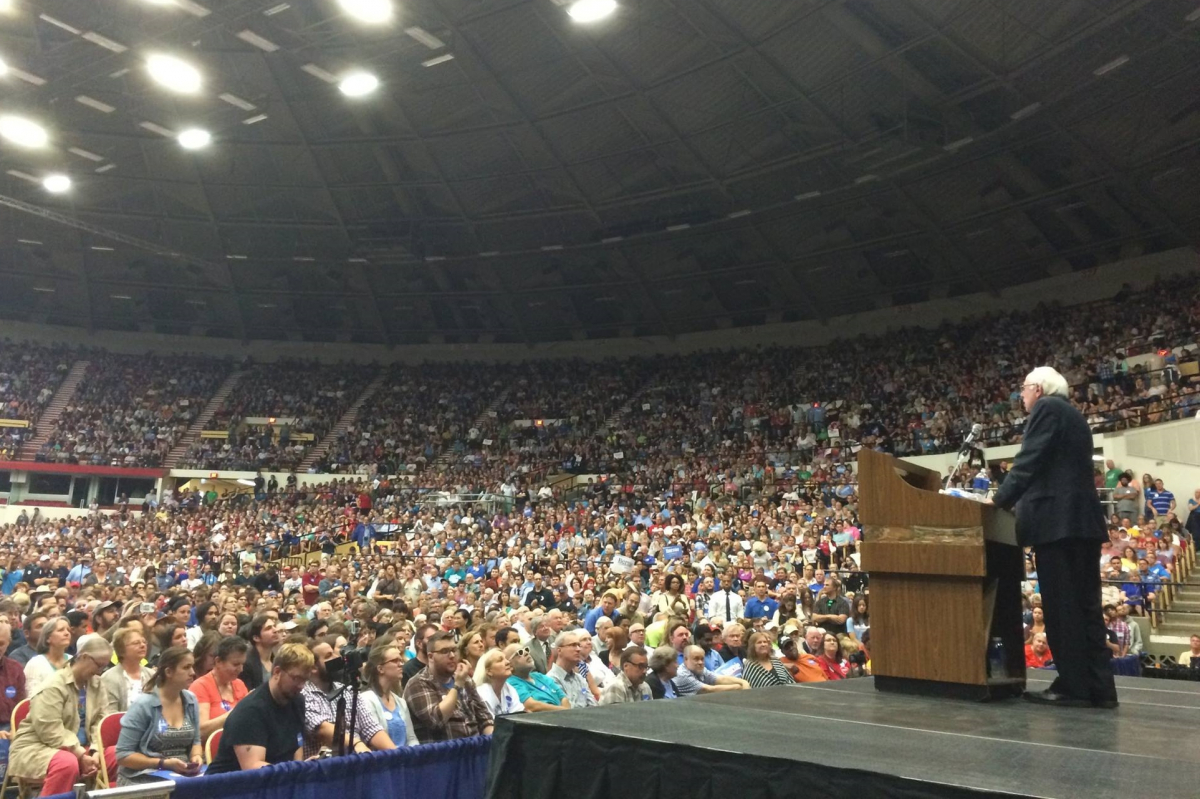 Union members are part of the groundswell of support for Bernie Sanders, who’s won the backing of a number of local unions and state AFL-CIOs. Photo: Bernie Sanders Campaign.

Bernie Sanders’ campaign for president is drawing impressive crowds to rallies across the country—from 7,500 in Burlington, Vermont, to 300 in Birmingham, Alabama.

And it’s no wonder that many union members are part of this groundswell of support, or that he’s already won endorsements from a number of locals and support resolutions from the Vermont and South Carolina AFL-CIOs.

“It would be hard to find many other elected leaders in state or national office who have supported the issues of working families, working people, the working poor, and workplace justice any more than Senator Sanders,” said nurse Mari Cordes, a member of Vermont’s Teachers (AFT) local.

“It’s clear that Bernie, like Elizabeth Warren, has been out there speaking about the issues that are boiling up in union halls across the country,” said Larry Hanley, president of the Amalgamated Transit Union.

While he and the ATU have backed Hillary Clinton for years, Hanley said, “Hillary thus far has not offered us the path that Bernie has.”

So endorsements pose a strategic dilemma. “We don’t want to bruise Hillary so much in the process that she can’t win. We don’t want to lead our members down a dark alley,” he said.

An invitation-only event in D.C. on July 13, hosted by leaders of the Postal Workers (APWU) and former Communications Workers (CWA) President Larry Cohen, drew presidents or their designees from 22 international unions to hear the candidate speak.

A similar number showed up for a Clinton event the next night at the home of her campaign manager, John Podesta.

“Bernie Sanders has been a champion of postal workers and consumers, and raising the question of $15 for all as a minimum wage,” said APWU President Mark Dimondstein. “On that basis our union will give him serious consideration.”

Organizers of Labor for Bernie—a grassroots effort to build labor support for the Sanders campaign—say one goal is to discourage the AFL-CIO from making an early Clinton endorsement.

They argue labor has little to gain from an early endorsement. And they want more time for pro-Sanders activism to raise union members’ expectations on the issues being highlighted in his campaign.

They want 5,000 signatures on their Labor for Bernie statement before the AFL-CIO executive council meets July 29-30. As of July 15 they had 3,500.

Sanders, Clinton, Maryland ex-Gov. Martin O’Malley, and Arkansas ex-Gov. Mike Huckabee are all expected to attend the meeting, where the council could endorse a candidate or decide to hold off. Hanley said the ATU opposes an early endorsement.

AFL-CIO bylaws stipulate that these bodies may not “introduce, consider, debate, or pass resolutions or statements that indicate a preference for one candidate over another.” The rule also applies to personal statements by local and state officers.

But Labor for Bernie organizers hope that state and local fed bodies and officers are willing to flout the rules.

So far Sanders has the backing of Electrical Workers (IBEW) Local 2222 in Massachusetts, IBEW Local 159 in Madison, Wisconsin, the Vermont National Education Association (NEA), and Lithographers Local One-L (a Teamsters’ affiliate), among others.

“We were really happy he decided to run, because it gave us an alternative,” said Myles Calvey, Local 2222’s business manager. “Elected Democratic officials have it in their minds that labor has no place to go.”

Calvey contrasts Sanders with Democrat John Kerry. Just a few weeks after CWA and IBEW settled a hard-fought contract with Verizon in 2012, he said, Kerry was sharing seats in the press box at a Patriots game with CEO Lowell McAdam.

The Electrical Workers (UE) executive board has also issued a statement supporting Sanders, urging “members and locals to take a serious look at Bernie Sanders’s campaign and to consider their active participation in it.”

Clinton picked up a big endorsement July 11, when the executive council of the 1.6 million-member Teachers (AFT) became the first major national union to announce it would support her in the primaries.

President Randi Weingarten has close ties to Clinton, and serves on the board of the pro-Clinton super PAC, Priorities USA.

An AFT press release said members had supported Clinton 3 to 1 in a poll. But many members condemned the endorsement on social media, calling the process flawed and shallow.

“I was really flabbergasted. I think it seems so premature,” said Candi Peterson, vice president of the Washington Teachers Union, Local 6. She’d never heard about the union’s telephone town hall meetings or its “You Decide” website.

“It was the best-kept secret in town,” said Peterson, whose local is based in D.C., like the national union. “And that’s not typical of the AFT—we get bombarded with information.”

“It feels like the leadership did a ‘we know what’s best,’ that their influence with people in power is more important than the members,” said Jia Lee, a chapter leader of the United Federation of Teachers in New York City. “The top campaign contributors to Hillary Clinton are the same groups that support privatization of public education.”

The other big teachers union, the NEA, opted not to endorse early at its July convention. The Vermont chapter sent a delegation outfitted in Bernie T-shirts, with a box full of placards and stickers.

“People came up to us as soon as they saw our shirts and signs,” said President Martha Allen, “and they spread throughout the entire room. We ran out of all our stuff.”

The NEA could still issue an early endorsement in October, through its board and PAC council, or in February. Vermont NEA, meanwhile, will encourage members to knock doors for Sanders in New Hampshire's early primary.

Cohen, who stepped down as CWA president in June, is now working as an unpaid Sanders volunteer.

The TPP is among the issues motivating him. Sanders has been a leading opponent of the trade deal, while Clinton refuses to take a position.

“What we learned from the trade fight,” Cohen said, “is the gap between what people say when they campaign for the Iowa caucuses and what they then do. I don’t think anybody’s worried about any gap like that for Bernie Sanders.”

For Donna Dewitt, former president of the South Carolina AFL-CIO, the key is for Sanders’ message to reach deeper into the Democratic party base and non-voters.

A Sanders event in Columbia, South Carolina, last year drew local leaders from CWA, the Auto Workers, and the Steelworkers. “But the majority [of participants] were young Black workers with the Raise Up campaign, fighting for $15 an hour,” Dewitt said.

“[Bernie] was most impressed with them. The Democratic Party is expanding their base in the minority community, but nobody’s reaching these young workers. None of these people have ever voted before.”

“His message is basic things: people before money, working-class people are getting the shaft,” Garza said. “He speaks exactly what we feel. I know people that are staunch Republicans that are swinging toward Bernie, conservatives. His message resonates and crosses party lines.”

Hanley said the ATU is figuring out a process to promote more member involvement in deciding on the presidential endorsement.

“If you don’t do that, you’re just another logo put on somebody’s campaign,” he said. “Our real leverage is in, first, organizing our members around a set of beliefs—and then, through our members, organizing the public around those beliefs.”

Please be sure to sign up for Labor for Bernie 2016 at http://www.laborforbernie.org/#letter
The campaign will help network like-minded union members who support Bernie!

They're in for a real disapointment. Obama made the same promises in 2008 and then abandoned us, trying to bust the UAW and most recently the Chicago Teachers union. BS will do the same.

Bill, If you can go by Bernie's history you will not be in "for a real disappointment". His support of the trade union movement and workers organizing and fighting back to curb corporate power has been consistent and deep. Not just recently... but for decades. He does not have a history of tough talk only to fold like a cheap corporate suit. He has walked many union picket lines in VT and elsewhere around the country. He has actively supported the "hand in glove" necessity of workplace action and legislation to promote and secure deep systematic changes and improvements to benefit workers and our families. He is the strongest candidate by far that is willing to take on the insurance and fossil fuel industries to save our health and our lives. That being said one can never guarantee what someone does or doesn't do in the future. We only have our past writings, legislative proposals, and actions to look at. With Bernie's record as Mayor, Congressman, and Senator any US worker should feel confident supporting and pulling the lever for Presidential candidate Sanders.

Good accurate article, Dan. Labor Notes readers with any current and past involvement in SEIU should be aware of the danger that the SEIU Executive Board might endorse Hillary as early as September. Join Labor for Bernie and work with others to try to prevent that action.