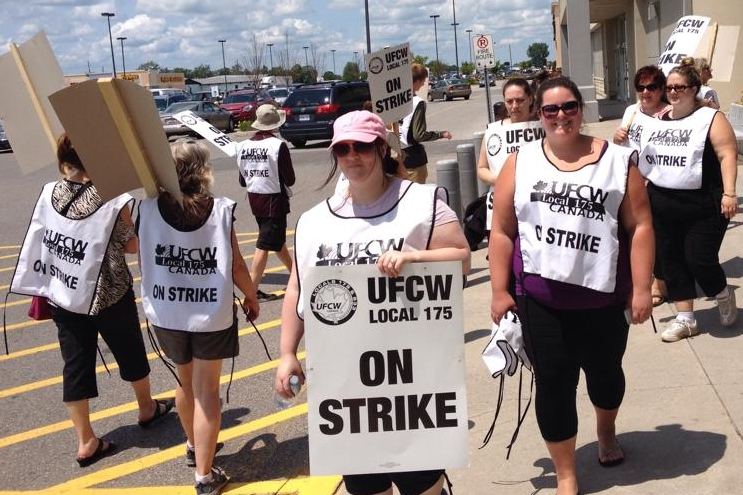 After years of wage concessions, workers at Canada’s largest grocery chain voted down a first deal, forcing their employer back to the table to do better. Members walked a picket line outside a Loblaws store in Chatham, Ontario. Photo: Derry McKeever.

After years of pressure to accept wage concessions, workers at Canada’s largest grocery chain are finding their voice.

Contracts expired July 1 for 28,000 workers in 119 Loblaws stores across Ontario. Food and Commercial Workers (UFCW) Locals 1000A, 175, and 633 bargained together in solidarity.

Events took a couple of dramatic turns. After members voted 97 percent to authorize a strike, the bargaining committees reached and recommended a tentative agreement, and majorities in Locals 175 and 633 ratified it.

But at nine stores covered under a separate agreement (including members of both locals), workers rejected it and went on strike on July 2.

Another 12,000 workers, members of Local 1000A, voted down the same agreement, forcing the company back to the table to hammer out a better deal.

“There is no legitimate reason for Loblaws to keep complaining about such a competitive market,” said Leanne Wilkins, a Local 1000A member. “It’s time to move back up and give workers some semblance of what we lost.”

Loblaws, with 192,000 employees, is one of Canada’s largest private employers.

Yet it claims it’s been squeezed by Walmart, which entered the Canadian market in 1994 and added groceries to its superstores in 2006. When Loblaws asked the UFCW for mid-contract negotiations in 2003, the union agreed.

James Harnum worked in the seafood department at the time. “Loblaws used the specter of Walmart as justification for everyone taking a significant pay cut,” he said.

The chain restructured to introduce a new type of store, larger and with more non-grocery products: the Real Canadian Super Store. Under the agreement, new hires at these stores started on a different, lower pay scale, and didn’t get Christmas bonuses or sick days.

In 2006 bargaining, more stores were converted into Real Canadian Super Stores or another new type called the Great Canadian Food Store. Workers were offered a buyout to retire, or a one-time payment as they converted to a lower wage scale.

But after all that, the Walmart threat didn’t really pan out. Loblaws remains Canada’s largest retailer, with 2,300 stores across the country. It recently acquired Shopper’s Drug Mart, Canada’s largest pharmacy.

Ryan LePage works at a Loblaws store in Whitby that ranks in Ontario’s top 10 for sales. His store is right beside a Walmart, but he hasn’t seen that hurt business. Loblaws has its own niche and customers.

“As much as Loblaw’s says that they are struggling,” he said, “they also posted record quarter one profits this year, so they can’t tell me they are not making money.”

Most unionized retail workers in Canada and the U.S. are in grocery. In both countries, grocery chains are griping about non-union competitors—and using the excuse to open large-format, lower-wage stores.

Workers are facing “a push for more part-time positions, very erratic scheduling, [and] a larger and unrelenting demand from employers to take less across the board,” says Kendra Coulter, associate professor at the Centre for Labor Studies at Brock University.

She notes that women, workers of color, and young workers are disproportionately represented in lower-paid positions across the grocery industry, in both countries.

Wilkins and LePage both said most workers in their stores were under 25. Making the union meaningful to young workers who often cycle through grocery jobs is a major challenge.

But this summer, with the strike deadline looming, workers were engaged and talking about on-the-job issues. Many felt the proposed wages didn’t match Loblaws’ rising profits.

“What it comes down to is knowing that if the company can afford to pay, they should,” said LePage.

‘SLAP IN THE FACE’

For part-timers—the majority of the Loblaws workforce—wage advancement is tied to hours worked, instead of years, a change ratified in 1996.

Under the agreement, part-time clerks with under 300 hours wouldn’t see any increase, because wages would start at Ontario’s current minimum wage of $11. Other part-timers would start at $11.25.

Increases would be tied to future minimum wage increases. Thanks to a provincial campaign by community groups and unions, Ontario’s minimum is now permanently tied to the cost of living.

The amount of the annual wage increase would go up slightly for every 300 hours a worker had put in—up to a dollar raise for the top tiers. But for a part-time clerk, you’d need to have worked at least 4,551 hours to see a raise above 50 cents.

Because most Loblaws workers are part-time and struggle to get enough hours, it takes years to hit that mark. LePage, for instance, has worked there since he was 17—almost five years—and has 4,200 hours in.

So now he makes the same as workers who just started. LePage was glad to see the raise for everyone, but says it makes his years with the company essentially “meaningless.”

If he were starting at age 17 today, LePage would make only $10.30, the lower wage for workers under 18 that was negotiated in the last contract and remains in the new one. This is legal in Ontario, which also has a separate student minimum wage.

Full-time Loblaws workers would see larger initial raises. On the proposed wage scale, full-timers would start at $13-$15.50, depending on the job classification, and also get quicker raises than part-timers, topping out at $19.55-$23.08 after 24 months. Assistant managers and receivers would earn over $20.

But workers who have already topped out—whether part-time or full-time—would only see an average $1.70 increase over the whole six-year agreement.

“A dollar seventy increase for the number-one grocery chain is a ridiculous slap in the face,” said Wilkins, “for the work we do every day to keep them in that number-one spot.”

The agreement also laid out new scheduling language, including improved guarantees of hours.

The issue of unpredictable schedules has been getting more attention thanks to retail organizing in the U.S. With the provincial Employment Standards Act under review, community and labor groups in Ontario are calling for legislation to make schedules fairer.

After workers voted down this agreement, Loblaws and the unions returned to the bargaining table and negotiated a series of amendments.

The main change: a new lump-sum bonus of $1,500 for full-timers. Part-timers at the top rate will receive $750, while all other part-timers get $350. Part-time workers who don’t receive at least a 25-cent increase on the pay scale will get an additional $100 bonus.

The amended deal also includes additional language on scheduling, including a two-week pilot program that reduces availability requirements for workers, and a “relationship-building program” facilitated by the Ministry of Labour to address shop floor issues.

In contrast to many grocery contract fights in the U.S., benefits weren’t a major issue. Canada’s universal health care means the agreement only covers supplemental benefits like dental and drug coverage.

On July 9, Local 1000A announced its members had accepted the amended agreement with a 57 percent yes vote. The strikers in Locals 175 and 633 also voted to ratify it and return to work.

Could the grocery workers have won a better deal this round?

Wilkins feels it’s no coincidence that Loblaws came back to the table so quickly after the no vote. With the Pan Am games rolling into Toronto and a well-known Loblaws brand a major sponsor, she believes both management and the Ontario government were concerned about the optics of a major strike.

She also believes union officers were taken by surprise by the “no” vote—and unprepared for the possibility of a strike. She hopes the experience will build momentum for next time, and raise her co-workers expectations of what’s possible.

“The gains were there, they just weren’t as much as we are hoping,” she said. “But people found their power. We found our voice.”

LePage agrees. Most people he talked to were happy with the upfront money, though he’d rather make more per hour.

Still, “it’s good to see that the members showed they had power,” he said. “It’s not just ‘the company says this is it, so ok, this is what it is.’”

Ultimately it’s going to take bigger wage gains, Wilkins argues, to reach the union’s goal of organizing non-union chains like Sobey’s. Starting wages there are higher, though the union benefits and wage progression at Loblaws are far superior.

“How can you say, ‘Hey Sobeys’s workers, come join our union,’ and when they look at our contract they see that they make more?” she asks.

Looking ahead, 9,000 workers at No Frills—another Loblaws chain—have a contract expiring next year. And as we go to press, Metro grocery workers who are members of Unifor Local 414 are about to vote on a proposed contract, after a lively campaign.

LePage has a hopeful message for retail workers in contract fights: “Spread the word and inform as many people as you can. When the time comes, changes can be made.”

Sonia Singh is a staff writer and organizer with Labor Notes.sonia@labornotes.org
Related
How We Turned the Tables On Starbucks Union-Busters »
Hotels Don't Waste a Crisis »
Gearing Up for Bargaining, Canadian Union Pushes for a Greener, Better Postal Service »
The Grocery Companies Denied Us Hazard Pay—So We Went Over Their Heads »
General Motors Returns to Oshawa—But Offers Only Second-Tier Jobs in a ‘Pop-Up’ Plant »