Good Jobs On the Line in Verizon Rematch 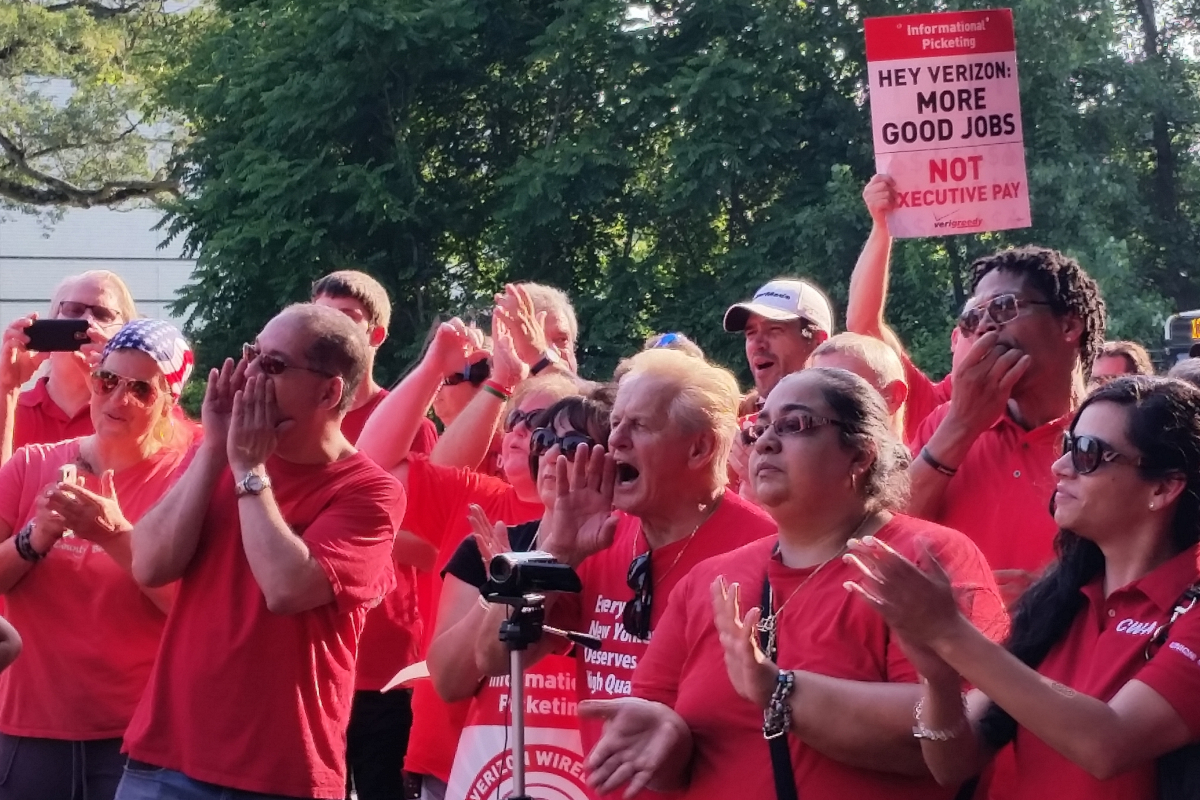 In negotiations this summer Verizon’s coming head-to-head with its unions, who want to protect gains won through decades of struggle. Photo: Pam Galpern.

UPDATE, August 3: Verizon Contract Expires with No Deal In Sight.

Verizon wants to drive down costs, shrink its union workforce even further, and get out of the landline business. But in negotiations this summer it’s coming head-to-head with its unions, who want to protect gains won through decades of struggle.

The Communications Workers (CWA) and International Brotherhood of Electrical Workers (IBEW) began bargaining a new contract in June for 38,000 telecom workers in the Northeast from Maine to Virginia.

The company raked in $9.6 billion in profits last year, and paid its top five executives $44 million. Yet it opened bargaining with a laundry list of giveback demands.

After the first day, hundreds of members marched through Rye, New York, to the hotel where negotiations are being held.

“Enough is enough,” said Keith Purce, CWA Local 1101 president. “It’s time for the top executives to take the hit, instead of having the workers give back.”

“This corporation is making a ton of money on the network, and the revenue that’s been produced over the years by the wireline workers is now being dumped into all these other areas [like wireless] that they don’t want the union workers to be a part of,” said Ed Starr, business manager of IBEW Local 2321.

The unions are preparing for a possible strike. Members are holding informational pickets at Verizon garages before work, taking strike votes, building alliances to pressure the company to build FiOS, and highlighting the link between job cuts and customer service quality decline.

In mobilization trainings, CWA members are coming off the job for a day to discuss industry changes, bargaining strategy, and mobilization tactics. A big CWA/IBEW rally is planned in New York City for July 25, one week before the contract expires.

Verizon: A Phone Company for How Long?

Verizon and AT&T, the two biggest landline companies, both want out of that business. They don’t want the cost—or the unionized workforce—that comes with building and maintaining a landline network.

Think of the wire that brings the phone, Internet, or television to you as one thing, the conduit—and the content it carries, for instance streaming video, as another. Verizon has always been the conduit; now it wants to be primarily a wireless company and content provider.

In 2008 Verizon sold its networks in Maine, New Hampshire, and Vermont to FairPoint. This year it sold its California, Texas, and Florida networks to Frontier.

In 2012 CEO Lowell McAdam announced the company’s intention to “kill the copper”—meaning take it out of service, either by moving lines to fiber or by introducing Verizon’s VoiceLink product, a wireless box that provides dial tone but depends on battery power and the wireless network.

How will new owners run the landlines if they’re sold? After FairPoint bought Verizon’s network in New England, it assumed the existing union contract. But the company went bankrupt in 2011, and Wall Street investment firms took control. Last year they imposed a union-busting contract that led to a bitter four-month strike.

Verizon workers aren’t just up against one company. They’re fighting an industrywide corporate agenda that sidelines consumers and threatens to eliminate union jobs.

Most significantly, Verizon doesn’t want to be in the landline business anymore.

It’s true that more households are going to wireless-only phone service: 44 percent last year, according to the National Center for Health Statistics, with another 15 percent “mostly wireless.”

But customers, streaming more content than ever, are also looking for reliable Internet connections. Verizon’s landline division is still profitable, largely because of its fiber product, FiOS, a dedicated high-speed Internet, phone, and video connection to the customer’s home.

High-speed Internet service is increasingly a universal necessity. And since FiOS is built and maintained by union workers, it’s also a source of good jobs.

Nonetheless, Verizon has announced it doesn’t intend to continue building FiOS—prompting CWA to join forces with consumer advocates and elected officials in the “Where’s my FiOS?” campaign. (See box.)

Even wireless technology still runs over landlines, as workers are quick to point out.

“They can talk all the shenanigans they want,” said Denise Campbell, a central office technician and Local 1101 steward in Manhattan. “Without landlines there is no wireless. A lot of people don’t know that. They still need us. We have to fight, or they’ll take everything we have.”

Verizon’s trajectory toward becoming strictly wireless is a choice. The company could stay in the landline business, while growing wireless at the same time, and still be profitable. It’s just choosing not to.

The industry is changing fast, largely because of deregulation. The 1996 Telecommunications Act changed or eliminated many of the rules that used to rein in corporate behavior.

Verizon promised to build FiOS throughout New Jersey, New York, and Pennsylvania—and got tax breaks and rate hikes in exchange. But the company announced in 2012 that it won’t extend FiOS to any new areas beyond where it’s already signed an agreement or begun to build.

CWA is working with local politicians and advocacy groups to pressure the company to fulfill its obligations and build FiOS.

In New York City, the union is pushing the company to comply with a 2008 franchise agreement that allows Verizon to sell cable service in exchange for “making FiOS available to every resident” by last June.

Verizon claims it has met its obligations. But residents across the city will tell you different. They want FIOS—and can’t get it.

The union has set up a “Where’s my FiOS?” website that asks customers to tell their stories.

Members have also leafleted lower-income neighborhoods that were left out of the build, such as Washington Heights and Astoria. They emphasize that residents can’t get FiOS in part because Verizon has cut so many jobs over the last decade: 4,400 in New York City and 8,500 in the state.

Fifty CWA members fanned out to talk with city council members on a May lobby day.

“When we spoke with Corey Johnson, city councilmember from Manhattan, he got what we were talking about right away, because he’s tried to get FiOS himself and can’t,” said Chris Smyth, a translation administrator and chief steward in Local 1101.

“Councilman Torres from the Bronx said that FiOS is available in the wealthier parts of his district, but not in the poorer parts.”

Days before bargaining started, the city issued its audit of Verizon’s compliance with the franchise agreement. It denounced the FiOS implementation as “an egregious failure” and found that the company “substantially failed to meet its commitment to the people of New York City.”

The city can sue Verizon for breach of contract, though officials have said first they want to try to get the company into compliance.

CWA is keeping the pressure on. The union’s goal is to make the company fulfill its promise to make FiOS (really) available to every resident, regardless of neighborhood or income.

Because it can, CWA says, Verizon is abandoning its copper lines and letting service quality slide. FiOS may be the future, but thousands of customers are still on copper lines.

Under past regulations, Verizon was heavily fined if customers were left out of service for more than 24 hours. In 2004 the company was fined $50 million in New York.

But in 2005 the state’s Public Service Commission eliminated the mandatory fines. And in 2010 Verizon got the PSC to agree that “core” customers (elderly, lifeline, and other “special cases”) were the only ones it had to ensure weren’t out of service more than 24 hours.

While landline is still somewhat regulated, wireless is entirely unregulated.

The company has also fought hard to keep Verizon Wireless non-union. A hundred technicians in New York City were the only ones unionized until last year’s breakthrough, when 70 workers at six Brooklyn wireless retail stores joined CWA. Retail workers at an Everett, Massachusetts, store followed suit.

CWA is bargaining the wireless technicians’ and retail workers’ contracts alongside the larger landline contract.

“The company wants to move call center work to vendors, either in the U.S. or in other countries like India and Mexico. They want to be able to do whatever they want with the calls, and we’re fighting to keep all our work here,” said Don Trementozzi, CWA Local 1400 president.

On the job, landline workers’ daily experience has changed radically. In recent years the company is taking a much more aggressive approach to transfers, assigned weekend work, discipline, and employee monitoring.

Many upstate workers have been on consecutive weeks-long rotations to New York City, away from their families much of the year.

“Due to the company’s consolidating and closing work centers, we have people who are traveling a couple hours each way, all over Massachusetts and Rhode Island, to get to work every day,” Starr said.

Managers track technicians’ every move through GPS, often calling customers to question them and compare their answers to timesheets.

“I treat every customer like family. And/or a company spy,” said one technician.

This atmosphere, combined with the uncertainty created by sales rumors and the company’s clear intention to get out of landline, has created an extremely stressful work environment.

Each step to deregulate the industry also weakens the unions’ bargaining power. So fighting for stronger regulations is key to the contract campaign.

New York’s PSC still has the ability to force some changes. For instance, when Verizon tried to make VoiceLink the only option for customers on Fire Island, the PSC ruled against the company in 2013, after a campaign by CWA and advocacy groups—though that fight is far from over.

CWA has been pushing state legislation that would protect workers and consumers in the event of a landline sale, and reinstitute fines when customers are out of service more than 24 hours.

Union members have picketed in Albany, delivered thousands of handwritten letters to the PSC, and spoken with legislators about how deregulation is hurting customers and workers.

In June the PSC announced it will hold eight public hearings across New York to assess the impact of deregulation on the industry—hearings that CWA and consumer-advocate groups requested in 2014.

CWA is mobilizing members and retirees to attend. Union reps will testify on what job cuts have meant for workers and customer service.

The fact that Verizon landline hasn’t hired in so long means almost everyone has worked there at least 15 years. These are longtime union members who came of age in an era when mobilization forged strong contracts. Almost everyone has been on strike at one time or another.

Workplace mobilization is still essential. But it has to be part of the larger campaign for a full FiOS build, good jobs, and universal access to high-speed Internet.

Pam Galpern is a field technician at Verizon and a member of CWA Local 1101.