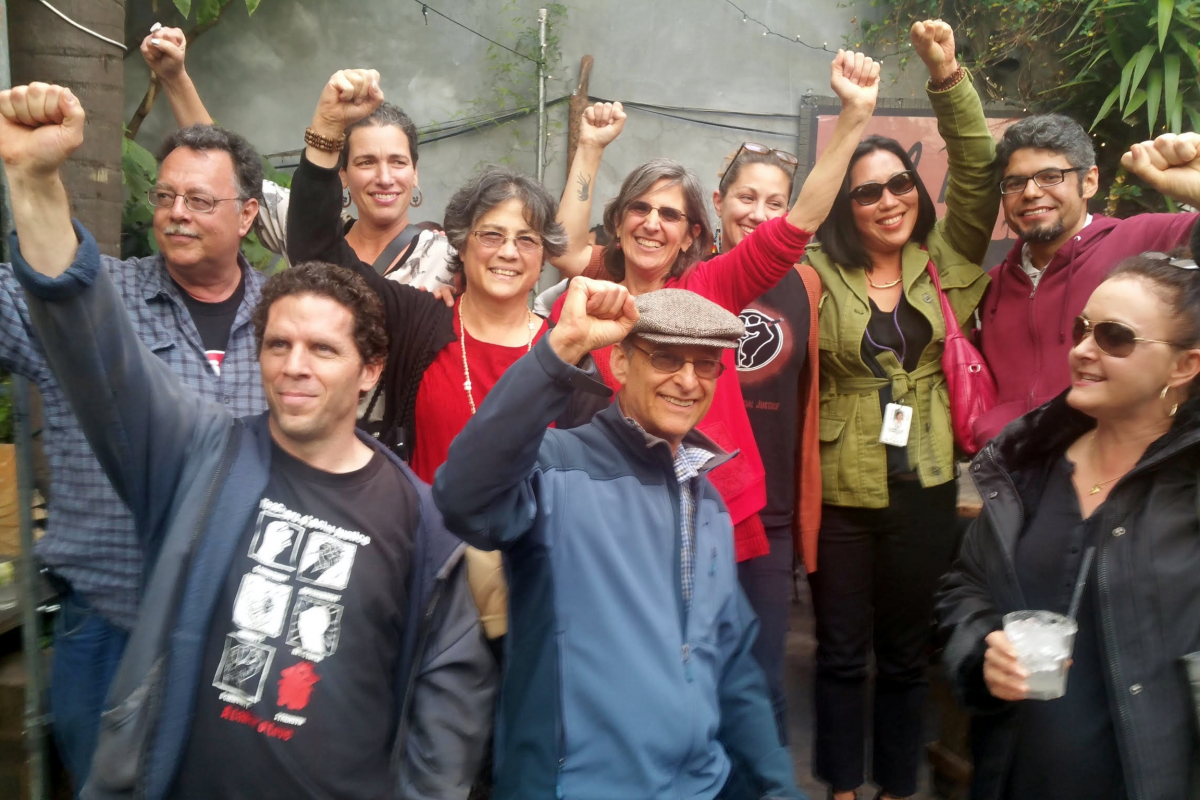 The new leaders of United Educators of San Francisco are pledging to empower members, take on standardized testing, and back struggles for affordable housing. They include President-elect Lita Blanc (center, red shirt), Secretary-elect Lisa Gutierrez Guzmán (to her left, red shirt), and Treasurer-elect Tom Edminster (to her left, blue shirt). Photo: Educators for a Democratic Union.

In an upset victory, San Francisco educators have elected a new union president who promises to empower members, take on standardized testing, and back struggles for affordable housing.

Blanc, a longtime union activist who’s been teaching for 27 years at George Moscone Elementary School in the Mission District, ran as part of the Educators for a Democratic Union slate.

Two others on the slate won top offices in the May 19 election: Lisa Gutierrez Guzmán will be secretary, and Tom Edminster treasurer. EDU candidates were also elected to the union’s executive board to represent elementary, middle-school, and high-school teachers.

“I have hope again!” said Deirdre Elmansoumi, a librarian at Flynn Elementary.

Teacher activists created the reform caucus EDU eight years ago to push for an elected bargaining team and for more member input into bargaining priorities. EDU also criticized the former leaders for sidestepping the issues of standardized testing and the Common Core curriculum standards.

The caucus seeks to follow the example of the reform movement in the Chicago Teachers Union, where the union was revitalized both from below and by reaching out to parents and community. It has run candidates in three election cycles.

The new leaders plan to fight the erosion of working conditions—for instance, the ever-increasing administrative demands on teachers’ time. The caucus has also spoken out for raising pay and restoring lost hours for classroom aides and security workers.

Turnout was higher than usual. Ballots are usually mailed in, but Gonzalez and other activists crisscrossed the city to hand-deliver last-minute ballots, ensuring that every vote counted in a very tight race.

President-elect Blanc said she’s looking forward to “bring[ing] together the experience and wisdom of the current leadership with a vision of a reinvigorated union that puts membership empowerment and participation first.”

Blanc hopes to organize a fall conference to train members to enforce the contract and get their co-workers involved. She plans to assess and fight for the resources students need, and to encourage teachers to stand up to the testing regime.

Another top priority is outreach to parents. “We are not going to wait three years for the next round of contract negotiations to connect with the parents of our students,” Blanc said.

“Together we need to ensure that the new tax dollars coming from Sacramento go to guarantee the services that our children deserve: P.E. teachers, art and music teachers, counselors, social workers, more teacher aides to insure every child a decent education in every classroom.”

She intends for the union to educate parents about their legal right to opt their children out of standardized testing. This April saw an “opt-out upsurge” across the country.

“Standardized testing has narrowed the curriculum, robbing our children of the chance to explore music and art,” Blanc said. “The move to computerized testing has resulted in the net transfer of millions of dollars from [San Francisco Unified School District] to tech companies and to the corporations that produce these tests.”

HOUSING: ‘SOUL OF OUR CITY’

But the new slate’s agenda isn’t limited to the classroom. Blanc wants the union to do more to fight for affordable housing in the nation’s most expensive rental market.

“The union is fighting for the soul of our city,” she said, “and that means not just securing mortgage assistance for educators, but also protecting the two-thirds of city residents who are renters.

“These are the parents of our children and our young teachers, many with families, who cannot afford to live in the city. Both are being driven out of San Francisco by skyrocketing rents.”

“There is nothing more urgent than strengthening the parent-community coalition for affordable housing,” Blanc said.

Cynthia Lasden was the EDU campaign manager, and was just reelected to the union’s executive board. Tom Edminster is the union’s treasurer-elect, and has served on its executive board for more than 25 years. A version of this story first appeared at BeyondChron.