In Wisconsin, A Test Case for Right to Work 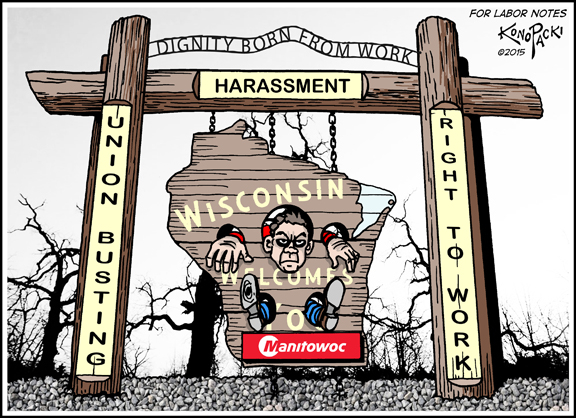 Workers at Manitowoc Cranes in Wisconsin say the company has been on a full-court press to get them to opt out of the union. They fear it's a harbinger of things to come under the state's new right to work law.

Three years after losing a ten-week strike over the right to collect dues, about 200 union members at Manitowoc Cranes in northeast Wisconsin face continuing efforts to decimate their treasury—an experience other unions may soon also face under the state’s new so-called “right to work” law.

“A lot of workers feel pressure,” said Bill Brault. A 40-year member of International Association of Machinists (IAM) Local Lodge 516, he abhors the company ultimatum that ended the strike: make dues voluntary and get a raise; or resist and lose jobs to replacement workers, otherwise known as “scabs.”

Brault won’t say the “S” word or give an opinion about workers who don’t pay dues. According to the company’s post-strike harassment policy, “I would lose my job,” he said.

IAM Cranes unit chair Scott Rosinsky said that, since the strike, the company has been in “full court press” to defund the union. “Our first day back, they called us in individually and gave us forms to opt out. That went over like a fart in church.”

The collective bargaining agreement includes an annual period during which workers can opt out of the union. As that period approaches, management exhorts workers in person and in letters to discontinue dues and get union wages, benefits, and representation for free.

Right to work does not yet apply to the Manitowoc workers, outside of this opt-out period, since they signed their contract before the law was passed. But once the contract expires in 2016, right to work will prevail—and the company can make a non-stop push for workers to opt out.

Few union members have caved in so far, Rosinksy said, but new hires under probation—who have the option not to join the union—are more vulnerable. The company “rams it down their throats. It got so bad, one wanted to file a harassment claim.”

Human Resources hit up new hire Joe Moore twice in two days. His first day on the job, “they laid out all the benefits I’d get without having to pay for it,” he said. “It kind of rubbed me the wrong way. I said, ‘No. I am not going to not join the union’.”

Called in the second day for the same spiel, he “made it abundantly clear” he wasn’t buying it. “They are nothing if not persistent.”

Moore, who had worked at Cranes six years before, now sees a workplace rife with tension. Workers are “on edge. They know who didn’t join the union and who walked the picket line. They don’t gather and talk like they used to,” especially when the subject is union. “They do it in secrecy.”

IAM members at another unit, Manitowoc Food Services, ratified a fourth one-year contract just days after right to work became law and as their jobs are being offshored to Mexico. They got a small signing bonus instead of a raise and elimination of rules requiring workers to pay dues.

Local president Steve Garber said the company’s “whole attitude has gotten worse” in recent years under a series of “very anti-union” negotiators who don’t stick around for long.

Both units are part of Manitowoc Company, headed by CEO Glen Tellock. He’s on the board of Wisconsin Manufacturers & Commerce, which championed Governor Scott Walker’s 2011 Act 10 stripping public sector unions of funding and bargaining rights, followed in 2015 by right to work for the private sector. The laws are products of the corporate/billionaire-funded bill mill, the American Legislative Exchange Council (ALEC).

Right to work comes with a Class A misdemeanor. Requiring dues payments could mean nine months in jail and/or a $10,000 fine for each violation.

Enforcement will supposedly fall to local district attorneys. But Madison DA Ismael Ozanne said the legislature neither funded nor coordinated right to work with law enforcement. With staffing levels “just a tick above 1985” in a county that’s grown 47 percent since, “I’m not sure how long it will take to figure out how to investigate those violations.”

Corporate-government connections and what they’ve wrought are no surprise to IAM members in both units who foresaw the Cranes strike as a harbinger of things to come. Asked if the company had somehow coordinated the strike with WMC, Brault and Rosinksy affirmed simultaneously: “Absolutely!”

Five decades of symbiotic labor relations are now history, and the typical IAM member—well over 40 with about 25 years’ seniority—faces an uncertain future. Local secretary-treasurer Gary Dworak expressed a sentiment likely shared by many.

"Loyalty” he said, “yields nothing.”

Kathy Wilkes is a longtime, award-winning labor writer and editor.

Related
Janus for the Rails and Air? »
How Milwaukee Teachers Beat Back Cuts and Busywork »
Why Missouri 'Right to Work' Went Down in Flames »
Viewpoint: Unions Aren’t Exclusive Clubs—We Fight for All Workers »
Missouri Voters Overwhelmingly Reject ‘Right to Work’ »