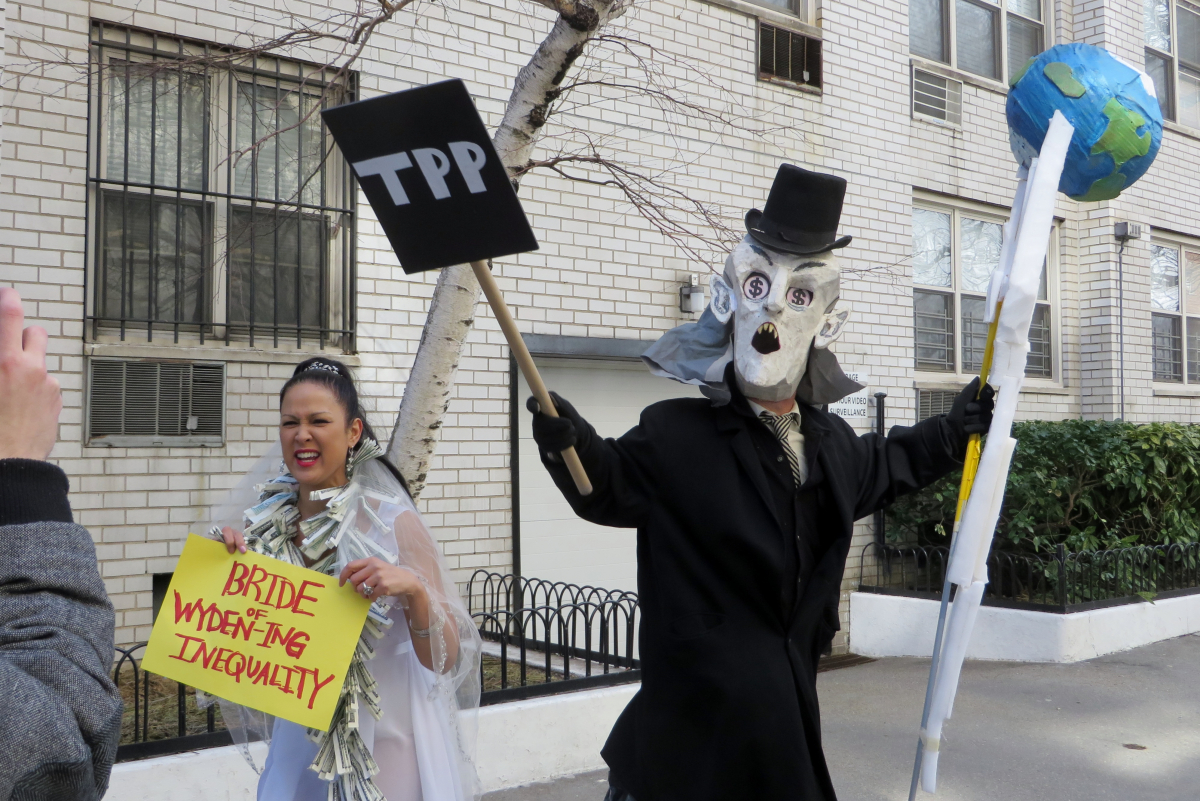 A monstrous puppet representing the Trans-Pacific Partnership impaled the world on his fork in a recent demonstration targeting Senator Ron Wyden, a Democrat from Oregon, who's in a key position to advance or block fast track. Photo: Alexandra Bradbury.

This spring the battle is coming to a head over several threatened trade deals, including the Trans-Pacific Partnership (TPP), a “NAFTA of the Pacific.”

President Obama announced in this year’s State of the Union address that he would ask Congress to grant him fast-track authority for trade agreements with Asia and Europe. The announcement unleashed a torrent of lobbying in favor of Obama’s request, and galvanized fair trade activists against it.

“These treaties would override many of our laws,” says Billy Engel, a member of Electrical Workers (IBEW) Local 3 in New York City. “Right away many labor rights and union rights can be totally discarded.”

Organized labor is united in opposition. Since the passage of the North American Free Trade Agreement (NAFTA) and a series of other agreements on the same model, jobs in one industry after another—manufacturing and call center jobs, for instance—have migrated to countries where companies can get away with paying lower wages.

The deals are lose-lose. Not only have they destroyed hundreds of thousands of jobs in the U.S., but they’ve also devastated the economies of the other countries involved. The import of commodity crops from the U.S. has pushed millions of subsistence farmers off their land in Mexico and Central America, driving many to migrate here for miserable, low-wage work.

“We’re all in the same boat now, and if we don’t do something, we’re all going to sink,” says Joe Tarulli, a steward in Communications Workers (CWA) Local 1106.

The fast-track mechanism, officially called Trade Promotion Authority, would allow the president to bring Congress a pre-negotiated trade agreement with a strictly limited time for debate—in the past it was just 20 hours—and then only an up or down vote, no amendments. (The exact details of the latest version aren’t yet known, but the concept is the same.)

Long-delayed fast-track legislation is expected to be introduced in mid-April. The bill may move quickly to avoid the public attention and debate that led to its defeat in the previous Congress.

At least three so-called free-trade agreements are being negotiated with Asia and Europe: the TPP, the Transatlantic Trade and Investment Partnership (TTIP), and the Trade in Services Agreement (TISA).

Negotiations for the TPP include 12 countries so far—the U.S., Australia, Brunei, Canada, Chile, Malaysia, Mexico, New Zealand, Peru, Singapore, Vietnam, and Japan—but because of a new feature called a “docking mechanism,” more could join after it’s ratified. There's talk that China and Russia, for instance, might join. Thus this could become the largest free trade agreement ever.

Negotiations for all three pacts are being held in secret. Only those with special clearance can see the texts—and, after seeing them, may not discuss what they’ve seen.

Most, but not all, of the advisers with this clearance represent corporations. Others—a labor leader or two, for example—may see only the texts that U.S. Trade Representative feels are relevant to their area of interest, and can’t even talk with members of their union about what they know.

“These treaties have nothing to do with military operations,” Engel said. “There is no reason for them to be classified secret.”

Portions of some of the secret texts have been leaked to the public. From these it appears the agreements follow the same failed model as NAFTA and many agreements since, such as the Central America Free Trade Agreement and the U.S.-Colombia deal.

The much-touted labor protections are weak. A controversial Investor State Dispute Settlement mechanism will allow corporations to sue governments—national, state, or local—over any laws or regulations they consider to constitute a tariff or a “non-tariff barrier to trade.”

Such barriers could include environmental laws, labor standards, “buy local” regulations—anything that could cut into profits, if it’s not specifically carved out of the agreement. For instance, under a prior trade deal, a private bank sued the government of the Czech Republic for not bailing it out—and the bank won. Pharmaceutical companies are eager to use the pending deals to do away with generic drugs.

“It’s not about trade. It’s about deregulating all these industries,” Tarulli said.

UNIONS STEP IT UP

As the battle over fast track heats up, unions are stepping up their efforts.

Members offer testimony at public hearings. They ask questions about trade during campaign debates and town meetings where Congressmembers appear. They meet with elected officials to inform them about concerns, put a face on the issue, and provide facts the legislators may not have seen.

Sixty unions both in and outside the AFL-CIO signed a March 2 letter to Congress opposing fast track. Local unions, councils, and districts are delivering copies to their Congressional delegations, repeating the message that fast track and these trade deals aren’t for working people, and we won’t support them unless and until they are.

All union locals are invited to participate in this action by downloading the letter and delivering it, with a cover letter of their own to show local support. If your union hasn’t done it yet, you can help by asking them to—and offering to assist.

The national letter was followed two days later by an AFL-CIO fly-in. Hundreds of union members and leaders from 20 states traveled to Washington, D.C. Members were briefed on the issues, then spread out to the offices of their members of Congress to deliver the message.

To connect with your congressional rep visit stopfasttrack.com.

For lots more information and resources, check out:

And for those who really want to get into the details and analysis, go to the
Economic Policy Institute. You will become an expert.

Underscoring the importance of this fight to organized labor, the AFL-CIO also announced during the week of March 15 that “the federation and its affiliated unions are freezing all Political Action Committee (PAC) contributions to federal candidates until further notice in order to conserve resources for the historic legislative battle around fast track (trade promotion authority) and the debate over the Trans-Pacific Partnership.”

The Machinists union (IAM) has posted a video in which Representative Marcy Kaptur of Ohio asks members to tell how NAFTA and other trade deals have affected their jobs, families, or communities.

Workers are invited to post stories on the IAM Facebook page. In the coming weeks, Kaptur and the union plan to bring these stories to Congress.

Many unions are urging members to contact their legislators and urge them to oppose fast track. If you haven’t had a chance to do this yet, the website www.stopfasttrack.com will get you connected to your Congressperson.

These trade agreements, if they pass, will make the rules. They’ll determine what our own lawmaking bodies can or can’t do to protect our jobs. And they’ll be permanent treaties, which are very difficult to change.

“We’re in a unique situation, a little different from NAFTA, because maybe back then our eyes were a little closed,” Tarulli said. “Now our eyes are open. All these problems with NAFTA—imagine you could stop those.”

Cynthia Phinney is president of the Maine Fair Trade Campaign and a rank-and-file member of Electrical Workers (IBEW) Local 1837.

A version of this article appeared in Labor Notes #433, April 2015. Don't miss an issue, subscribe today.
Related
Viewpoint: Will Your Local Union Sign On to Ask the WTO to Waive Patents on Covid Vaccines? »
Twenty Years Later, Remembering the Battle in Seattle »
NAFTA 2.0: What's the Deal? »
Viewpoint: The Agenda of the Mexican Working Class »
NAFTA Talks: What's the Deal? »