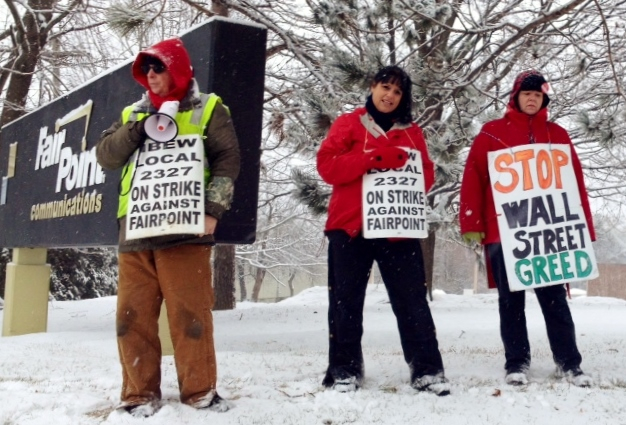 FairPoint workers in New England have ratified a new contract, ending the longest U.S. telecom strike in decades. The deal limits subcontracting and averts two-tier wages, but wipes out the pension for new hires. Photo: Fairness at Fairpoint.

The walkout began October 17. Workers voted up the deal over the weekend and will be back on the job this Wednesday, after 18 weeks away.

The 1,700 workers in Vermont, New Hampshire, and Maine staff call centers and build and maintain phone and Internet lines. Most are represented by the Electrical Workers (IBEW), which has a local in each state; the 300 call center workers in all three states are members of Communications Workers (CWA) Local 1400.

The unions’ key goals were to curtail work transfers—FairPoint’s practice of moving work around among the three states, which has often forced workers to move or quit—and subcontracting.

“I’ve seen contractors doing bad, dangerous work,” said Sherry Willey, an IBEW member in Vermont. “Contractors come in and do the work and then—boom—they’re done… It’s dangerous for the regular workers who will go back and do maintenance.”

The company’s final offer, imposed at the end of August, had no protections against subcontracting or work transfers. It also created a two-tier wage system for new hires, eliminated new-hire pensions, froze current workers’ pensions, and increased health care costs.

The newly ratified agreement limits subcontracting, mandating that it not cause layoffs or erode the bargaining unit. Work transfers are restricted to 0.9 percent of the annual work.

“I think we came out pretty darn good,” said Willey.

The union refused two-tier wages. But the four-year deal does wipe out pensions for new hires, and cuts in half current workers’ future accruals. For workers retiring more than 30 months after the signing, retiree health benefits will vanish too. Management accepted the union’s proposal on health care—which increases costs to employees, though not as much as the imposed contract did.

North Carolina-based FairPoint bought Verizon’s New England operations in 2008 despite a campaign by local unions to stop the sale.

As the unions expected, the company was ill-equipped to grow so fast. It quickly went under, declaring bankruptcy in 2011.

Wall Street investment firms pulled the company out of bankruptcy. Now six of them hold a majority of FairPoint’s stock; the biggest shareholder is a private equity firm called Angelo, Gordon.

Workers believe that after slashing costs and pocketing the resulting windfall, the owners plan to sell off what’s left of the company—exactly the kind of behavior private equity firms are known for.

Hawaiian Telcom went through a near-identical chain of events in 2011 and 2012: sold off by Verizon, it went into bankruptcy, and investors swooped in and imposed a brutal contract.

“These are vulture capitalists,” said Mike O’Day in Vermont, a district vice-president of Local 1400. “I’ve never seen anything like it, and I was on the bargaining team for Verizon in 2003.”

Part of the backstory to this fight is the decades-long unraveling of any meaningful regulation of public utilities. Back when there was just one phone company, in exchange for its legalized monopoly that company had to accept tight government oversight over its service and prices.

But the 1984 breakup of the Bell System began a steady retreat from public control. A 2012 law change even took away the New Hampshire Public Utilities Commission’s power to force companies to fix service problems. The commission still accepts customer complaints, but mostly can’t do anything about them.

Both unions backed bills last year in the Maine statehouse. Current law mandates that mergers (including the sale of telecom companies) “do no harm” to state residents. Based on the unions’ hunch that FairPoint will be sold again, “we wanted to change that standard to ‘public good,’” Amy Masciola said.

The other bill demanded that companies keep call centers in state. Diane Winton said her local mobilized members to contact their legislators, pack the room for hearings, and speak on the bills—but neither became law.

This year in Maine and New Hampshire the unions will support legislation to impose automatic cost penalties on the company at fault for service failures. Getting customers better service would likely require FairPoint to maintain a significant local workforce.

Months before the strike, the unions started gearing up for a tough contract campaign.

“I’m not sure exactly in the other states how it went, but in Maine we’re more organized and mobilized than we’ve ever been,” said IBEW member Julie Dawkins.

Members work all over the three states, sometimes in groups as small as three. To keep everyone plugged into the contract campaign, “well before bargaining, we trained mobilizers,” said Amy Masciola, who was hired by the four locals to coordinate action.

The locals worked with Masciola, who’s based in Maine, to train activists as chairs, coordinators, and mobilizers in a communication network. Each person had about 10 people to keep informed.

Diane Winton, president of the Maine IBEW local, said the system helped build relationships and quickly disseminate updates: “Our members are much more well-informed than they were in the past.”

As bargaining heated up, Mainers held informational pickets every Thursday morning, giving way to daily pickets once the strike began. They wore red and took group photos, “solidarity selfies,” for the “Fairness at FairPoint” Facebook page.

The unions recruited members “who were comfortable with public speaking,” Winton said, to tell others about their fight. About 50 Maine-based “road warriors” have gone out to speak at nearby union halls and labor council meetings.

When the strike began, workers had to shift from just telling their story to asking for financial support.

Strikers in Vermont collected unemployment. Those in Maine and New Hampshire never persuaded state governments to grant them eligibility.

CWA's national strike fund, created after the 1989 NYNEX strike, supported Local 1400 members. But IBEW has no similar fund; instead it typically depends on members’ individual savings.

That was augmented by a shared solidarity relief fund the four locals set up. Donations topped $350,000.

“When they [FairPoint] went into bankruptcy, we started telling people way back then, ‘you need to start putting money away,’” said Dawkins.

Some people did. “I felt the general pulse a long time ago,” says Jeff Dorn, an IBEW steward in Maine. “My wife and I set money aside, starting a couple years back.”

Still, “I feel really bad for Maine and New Hampshire,” said Willey, in Vermont. Even with unemployment and savings, it was tough for her and her husband—who both struck.

Dawkins served on the rank-and-file committee that reviewed applications for solidarity relief funds. “We unfortunately are seeing people that, no matter how prepared they were, they’re running out of money,” she said in early February.

In Vermont, CWA members seemed to bear the brunt of fundraising. “I feel like the IBEW leadership is pretty absent, and it’s a shame,” said Teamster Jim Fouts during the strike. Fouts is a member of a Vermont Labor Solidarity Committee, a network of activists organized during the 2014 bus driver strike, which mobilized to support the FairPoint strikers too.

Some couldn’t have, even if they’d wanted to. After the strike began, call center work was moved to Ohio and Florida.

The scab workforce doing IBEW members’ work was contracted through another company. Willey believes many were telecom workers who’d been fired in other states.

IBEW members formed “mobile pickets,” she said, to follow the scabs and protest at their jobsites. They were easy to spot: FairPoint put them all up in the same hotels, and they came with work trucks or rental vans.

When Dorn and his co-strikers realized scabs were hiding out in offices, waiting for picketers to go home, they “broke up into two teams, morning and afternoon.” In the middle of each day, the afternoon team would get a call from the morning crew, and “myself and my partner would go pick up where they left off,” said Dorn.

Even late in the strike, Dawkins said her local still had picketers seven days a week at almost all locations, though their numbers lagged a bit as some sought work to pay the bills.

Friends, family, and members of other local unions and community groups joined pickets and rallies.

Meanwhile, according to local press, customer complaints ticked up. An outage took down Vermont’s 911 system in November, prompting an ongoing investigation by the state’s public service department. The union did its best to let customers know how to file complaints with public agencies.

In January, the unions and management agreed to federal mediation. Members were relieved to know that the two sides were back at the table—but for weeks, that’s about all they knew.

Local bargainers said a “gag order” prevented them from sharing what happened in mediation. The Federal Mediation and Conciliation Service said mediators do not have the power to impose a gag order—but parties in mediation may agree to keep their negotiations secret.

Pickets continued, but the “gag order” demobilized members. Some strikers said they worried that if they said anything bad about FairPoint in the press, the company would walk away from mediation.

In New Hampshire, CWA Steward Stephanie Hanscomb said the union “tapered off things like public rallies in public squares once in federal mediation.”

“Both sides have agreed to a ceasefire. We can still mobile picket, but… we really can’t do anything to disparage the company,” Winton explained during this period. “It’s frustrating to the members.”

As members prepare to return to work, some of this frustration has dissipated. “We’re a lot stronger of a union now,” Willey says. She wonders if workers at Hawaiian Telcom could have protected their pensions if they’d struck too.

CORRECTIONS: The original version of this article called this "the longest telecom strike in U.S. history," but a 1971 New York Tel strike was longer, at 218 days. FairPoint's CEO did previously helm Hawaiian Telcom, but left before the 2011 contract fight, so he wasn't "the very same one who ran Hawaiian Telcom workers' contracts into the ground." CWA's strike fund is national, not local, and we've corrected our account of its history. We've also updated the final tallies of relief funds raised ($350,000, not $250,000) and union members who crossed the picket lines (11, not "fewer than 10") and corrected the spelling of Stephanie Hanscom's name. Labor Notes regrets the errors.