The Logic of Short Hospital Strikes 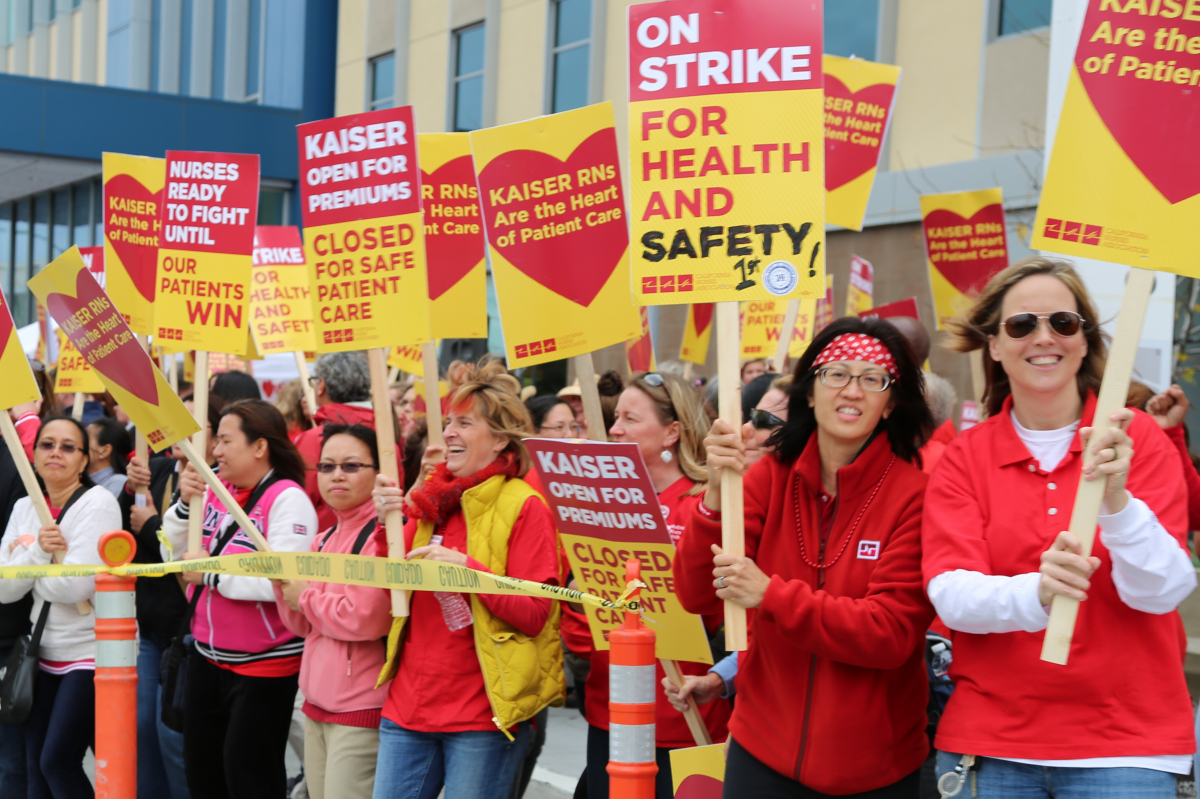 Kaiser Permanente nurses in California walked out November 11 on a two-day strike. Despite challenges unique to the sector, health care strikes can be powerful. Photo: California Nurses Association.

Picture a strong strike. Production is halted, right? The factory floor is empty, machines stand silent, robust pickets keep scabs out. The boss, caught off guard and losing money by the day—or the hour—relents and agrees to the workers’ demands.

But when you’re striking at a hospital, most of that goes out the window. Leaving patients with no one to care for them is the last thing your union’s caregiver members would do. Besides, the law says you have to give the employer 10 days’ warning so they can arrange for scabs to replace you.

And most often health care strikes aren’t open-ended: the union announces in advance the strike will last one day, or two.

So, how do you make a health care strike strong? What’s the point in striking at all when the boss has substitutes lined up, and knows the crisis will end by Thursday? I talked with longtime strategists from several unions.

First, let’s talk about the money. Even a one-day strike costs the employer. That’s part of what makes it work as a pressure tactic, though it’s not the whole picture.

Health care workers are expensive to replace. Many jobs require certification or licenses, so finding enough qualified scabs means bringing people from out of town, maybe even out of state.

Hospitals commonly contract with agencies to recruit and supply replacement workers. When you add up the hourly rate scabs get, the agency’s cut, and travel and hotel expenses, this day is going to cost the employer a lot more than a regular day.

On top of these expenses there’s loss of revenue. Doctors don’t want to work with scabs, and they’ll often postpone non-urgent procedures. In a recent three-day strike at Oregon’s McKenzie-Willamette Medical Center, “all the doctors except for one canceled all their surgeries,” said Service Employees Local 49 Political Director Felisa Hagins.

Hospitals also sometimes transfer away what patients they can—even as they publicly claim everything’s fine. They want to minimize the risks while the hospital is full of newbies. That means lost revenue, too.

So, to avoid the strike’s big price tag, the employer may blink and settle. There’s typically a forced decision point a few days after you give your 10-day notice, when the scab agency requires a commitment, said Bill Cruice, executive director of the Pennsylvania Association of Staff Nurses and Allied Professionals.

In his experience, “that’s the most common way it plays out,” Cruice said. “Settlement occurs between when you give the notice and day six, when they have to write a check to the scab agency.”

But your economic leverage may be limited, especially when the employer is big and rich. An extreme case is the Kaiser Permanente system of hospitals and clinics, where California nurses held a two-day strike in November.

Kaiser earns $12 million a day in excess revenue, California Nurses Association Co-President Zenei Cortez told me. (That’s essentially profit, but Kaiser, like many health care corporations, is set up as a not-for-profit.) So the cost of a strike, even by 18,000 nurses, isn’t going to bring it to its knees.

He points to Kaiser’s $30 billion in reserves. “In any normal corporation there would be stockholders who would agitate to have some of that distributed as dividends and so on,” Gill says. “In the nonprofit environment, Kaiser leadership exists in a bubble, accountable to no one except themselves.”

Kaiser is also unusual in that it’s a prepaid insurance plan—so its revenue depends on how many people are enrolled, not how many services are provided. That means canceling elective surgeries helps its bottom line for the day, by reducing expenses.

“So in fact this strike will make them earn more money, because patients will not be in the hospital,” Cortez explains.

But that doesn’t mean the company is untouchable. “Striking is effective at Kaiser not because of the money, but because of the ability to move public perception,” Gill said. “Kaiser cares about membership enrolled.”

That’s something health care companies have in common, nonprofits especially: they’re image-conscious. A strike is one of the strongest ways to get your message out to the public.

“If you have a rally or a picket, sometimes the media attention is spotty,” said Colleen Fewer, a Local 5 organizer, “but workers on strike, people pay attention.”

“Inevitably when there’s a strike, the attention focuses on executives… They generally are loathe to have that light shined on them,” Cruice said. “You find out the CEO of my local hospital is making literally $1.7 million a year—what’s going on there? That doesn’t seem right.”

And in an industry where determined caregivers are always battling management over short staffing, “strikes allow us to bring great public attention to the problem,” said Sal Rosselli, president of the National Union of Healthcare Workers (NUHW).

He can’t remember a single health care strike that didn’t have the staffing issue at its center.

“It’s a different kind of worker. Almost all go into this work to care for patients,” Rosselli said. “Organized health care workers really are the last line of defense to employers thinking about the bottom line instead of quality care.”

“Many of these people signed onto the rolls of Kaiser are formerly uninsured, and especially from a mental health standpoint, have multiple problematic health concerns,” Papazian said, “issues that don’t require less staffing, but more.”

In any industry these days, turning a strike to workers’ advantage takes creativity, since bosses hold so many of the cards legally and financially. A long, open-ended strike “is frequently the battle the employer wants,” Cruice said.

Legally, there’s the risk the boss will lock you out and, unless the strike is based on unresolved unfair labor practice charges, permanently replace you.

And practically, working people are pretty broke—so the boss may be able to outlast you, unless you have a big strike fund, your state lets strikers get unemployment compensation, or there’s a way strikers can get some temporary work, such as in a non-struck hospital.

So a short strike—or more than one—can show your power and draw community attention, without being as punishing as an open-ended strike can be.

If you do multiple short strikes, be careful how you frame them. A campaign of intermittent strikes is yet another item on the long list of tactics labor law doesn’t allow. But you can strike over specific issues.

Four Kaiser strikes in Hawaii last year offer a good example. The first was against the closing of the urgent care clinic. It was small, a minority strike.

“We actually did not want everyone to come out,” said Local 5 Organizer Marsha Bruhn. “We only wanted a handful of people, because we wanted to engage with the patients, and the only way that would happen is if Kaiser remained open.”

Teams of strikers leafleted patients on their way in and out of clinics, talked about how the layoffs would worsen care, and gathered signatures on a petition. “It kind of drove Kaiser crazy,” Bruhn said. “At first they thought we couldn’t be there, then they found out we legally could.”

Following the same model, the union tackled other issues with small strikes. The third was to protest an unfair labor practice: the company had disciplined two workers for participating in the second strike. Three hundred people joined this time.

Some workers volunteered for each strike, and others chose to work. “Both the people outside and the people inside had assignments,” Gill said. “We didn’t stigmatize the group who stayed in.”

But momentum built. The group choosing to strike doubled each time. “By the time the fourth one came around, everyone wanted to participate and we couldn’t stop it,” Bruhn said.

WHO’S GOT THE POWER?

“What made it harder for Kaiser was they couldn’t predict who was coming to work or not,” says Bruhn. The 10-day notice doesn’t have to name which workers will go out—though management, flustered, did try to get the union to produce a list.

“It wasn’t till the day before that the food service people said ‘uh uh, we’re not going,’” Bruhn said. “Kaiser had no idea, so they couldn’t serve food in the hospital that day. They had to truck it in.

“It was the unknown, I think, that really got to Kaiser.”

Now the union is preparing for a bigger strike, using a petition to gauge strong and weak spots as it builds toward a formal strike vote.

Even a short strike is a vivid demonstration—both for management, and for workers—of who really runs the hospital.

“In health care, there is no stockpiling. There’s no ‘we can still send orders out,’” Hagins said. A strike “fundamentally changes their business model for the day… Upper management has to spend an inordinate amount of time and energy shifting everything, even for a short strike.”

If the strike is wall-to-wall, all the more so. It’s hard enough to run a hospital when, for instance, the nurses are scabs. But if it’s just nurses, at least the unit secretaries, nursing assistants, phlebotomists, respiratory therapists, billing clerks, and housekeepers they’re interacting with know what they’re doing. If everyone can strike at once, you’ve got a lot of power.

Hagins said she’s seen bosses “come to the table the night before and work into the wee hours of the morning to avoid a strike.”

If the strike goes forward, and goes well, don’t expect the boss to settle the next day. In fact, that’s unlikely: “you’ve caused enough chaos at that point,” Hagins said, that they’re scrambling to get back in control of the schedule and hospital operations. But you may see the strike’s impact in the boss’s behavior days or weeks later, when you get back to the bargaining table.

So strikes also change the participants, individually and as a union. “When the employer throws down the gauntlet and says they want to take certain things away from you,” Cruice said, “there’s a very fast educational process that happens, where that union member is never going to be the same again.

“Smart management lawyers understand that dynamic, and don’t necessarily want to create a smart, educated union for the long-run.”

“I think it’s this core moment of struggle, where you make a decision collectively to withhold your labor,” Hagins said. “I have never seen workers take that decision lightly.

“It’s the union in probably its purest form. A large group of people making a decision all at once, together, to do something brave—that builds the union. They can see their power in that moment.”