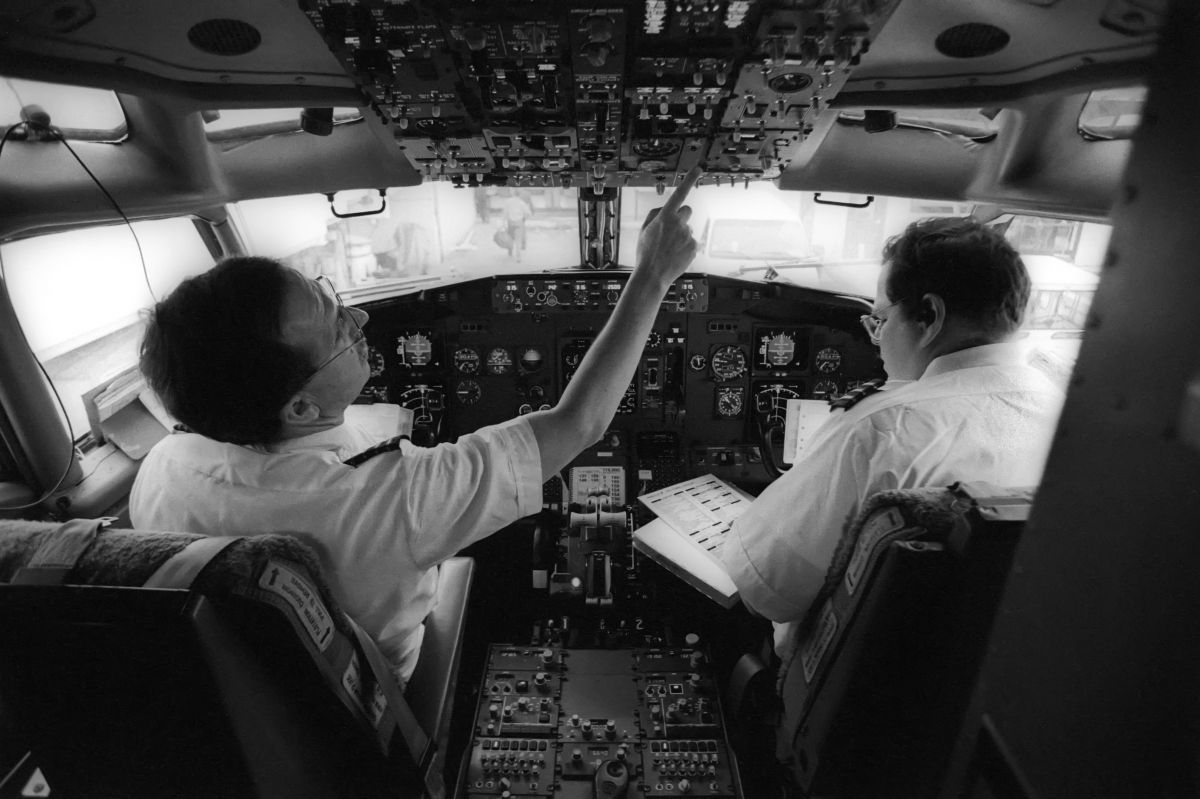 Airline pilots who carry passengers are operating under new occupational fatigue regulations which for the first time take into account the toll of late-night and early-morning work. Photo: Jim West/jimwestphoto.com.

Paul Proudlock went to bed at midnight to calibrate his sleep for a freight train he was to drive at 2 p.m. the next day. At 2:15 a.m., a Canadian Pacific dispatcher called him and asked him to take a passenger train in three hours.

“I’m not rested,” Proudlock is heard explaining in a company recording. The dispatcher threatened to discipline him and cancel his 2 p.m. train. “You’re obligated to go. If you answer the phone, you have to go.”

“No, I’m not,” said Proudlock. “I’m obligated to do the safe thing first… I drive a train.”

This kind of pressure is commonplace, according to railroad and airline workers. They say managers push workers to pilot planes, trains, and buses when they are too tired to safely do so. The stakes are high for the workers—and for the general public.

In a survey of freight train operators conducted by the Teamsters Canada Rail Conference, 96 percent said they had gone to work tired. More alarmingly, three-quarters said they fell asleep while working—in the previous month. Among those who, like Proudlock, turned down jobs because of fatigue, 43 percent said they faced investigation or discipline.

“They’ll pressure people… and people don’t know what leg to stand on,” said CSX locomotive engineer J.P. Wright, who is based in Kentucky. “There are so many gray areas in the contract, if you could see a flow chart, it’s like a Merrie Melodies crazy cartoon.”

The main problem with freight railroads, said Wright, is that “they’ve short-staffed everything to the bone.” So when somebody takes time off, others have to unexpectedly fill in, creating cascades of scheduling complexity.

While rest times were increased in a 2008 rewrite of railroad scheduling rules, fatigue problems persist.

And regulations don’t help if the penalties are low, along with the chances of being fined. “I was just told, on a recorded CSX line, that they knew specifically they were violating the rest law but they would just go ahead and pay the fine,” said Wright, who is co-chair of the cross-union caucus Railroad Workers United.

Pilots of U.S. passenger planes are operating under new occupational fatigue rules since January, rules that could be a model for other transport workers. The new rules take into account that “there is ample science indicating that performance degrades during windows of circadian low [2 a.m.–6 a.m.] and that regular sleep is necessary to sustain performance.” Workers should work fewer total hours if they are scheduled during those hours, the new regulations acknowledge.

The rules also agree that daytime sleep is not as restorative as night-time sleep, and that “consecutive nights of work degrade productivity within three days because it is very difficult for most people to sleep effectively during the day.”

The change was a long time coming. After two decades of inaction, U.S. aviation authorities were ordered by Congress to redo the regulations after pilot error resulting from fatigue was blamed in a 2009 Colgan Air crash near Buffalo, New York. Fifty people died, including everyone on the plane and one person on the ground. Their families pushed Congress to act.

The investigation determined that the pilot had risen at 6 a.m. The flight left Newark at 9:20 p.m. and crashed an hour later. The co-pilot had commuted from Seattle—if she slept at all, it had been in a crew room at the airport or on a plane. She had not had a chance at normal rest for 24 hours, investigators said.

While weather was also a factor—the pilots worried aloud about ice on their wings—fatigue meant they couldn’t deal well with unexpected circumstances.

“Fatigue, which results from the combination of sleep loss and disruption of circadian rhythms, is insidious,” writes health and safety expert Suzanne Gordon. It’s also hard for a fatigued person to know just how incapacitated they are, she says. Their judgment can be as impaired as someone who is drunk.

After the crash, another Colgan pilot, Chris Wiken, told PBS’s Frontline he had been pressured into flying when he was fatigued. After working several consecutive 16-hour days, he told his manager he was too tired to fly.

Wiken said the manager responded, “‘We can, you know, shorten your duty day for you. Instead of saying you showed up at 5:40 this morning, we can say you showed up at 6, and that would give you that extra 20 minutes to take that flight back to Albany.’”

“When they were supposed to be released… instead the rules went to the OMB for 90 days,” he said.

Specifically they went to the Office of Management and Budget division known as OIRA, the Office of Information and Regulatory Affairs. OIRA conducted a cost-benefit analysis, according to the union, even though the Congressional mandate specified that safety was the only pertinent consideration.

When the rules came back, they exempted cargo planes. Cargo plane crashes are regarded as acceptable losses, said Gaudet, “because it’s only two pilots” who would die. (The union points out that cargo planes share airspace and airports with passenger jets.)

The carve-out is all the more exasperating because cargo pilots are more likely to fly at night. Currently they can be scheduled for 16 hours of duty, night after night. Sleep problems are worsened when flights cross many time zones. UPS pilots may fly to Anchorage, Shenzen, Dubai, and Cologne, then back to Louisville.

UPS and FedEx lobbied hard for the carve-out, arguing that “the dollar value of the pilots and aircraft that would be lost in fatigue-linked crashes would be far outweighed by the higher labor costs to the industry,” according to a ProPublica report.

The shadowy OIRA office, controlled by the White House, is notorious for watering down regulations in favor of business interests.

Cargo pilots were aware that the regulations were changing, but not for them. UPS pilot Cerea Beal, Jr., and first officer Shanda Fanning discussed the carve-out on August 14, 2013, as they flew from Memphis to Birmingham.

“I mean, I don’t get that. You know, it should be one level of safety for everybody,” said Beal. Fanning agreed, “It makes no sense at all.”

We know this because the cockpit voice recorder was recovered after the plane crashed short of the runway at 4:47 a.m., killing both pilots. Just before the flight, Beal told the union’s scheduling committee chair, “These schedules over the past several years are killing me.”

“UPS is an extremely punitive company,” Gaudet said. “Ninety percent of the time if you say you’re too fatigued to fly, the pilot manager will call you up and say ‘is there a problem?!’”

He said the company’s aggressiveness means that instead of refusing flights, pilots often “fly it and grieve it.”

The union did a survey of its active pilots, and 88 percent agreed or strongly agreed that “calling in fatigued will invite adverse scrutiny from UPS.” Only 3 percent disagreed.

The union has sued to make the new federal regulations apply to all pilots, and a new decision is expected this month.

The train safety regulations in force since 2008 say you can work a maximum of 12 hours on duty; then you have to be given 10 hours off. You can work six consecutive days, or sometimes seven, but then you get two to three days off.

But the regulations don’t take into account the 2 a.m. to 6 a.m. “window of circadian low.”

“That’s definitely one of the things railroaders talk about, the 4 a.m. dead zone,” said Wright, who is based in Kentucky. “Most of the tragic accidents that happen on the railroad happen at those times.”

Having another person to help you stay awake—and to be awake themselves—is enormously important. On commercial aircraft, a copilot is still required. But on the railroads, where crews usually consist of an engineer and a conductor, that’s under attack. Railroad Workers United has fought a decade-long battle to stop the railroad companies from instituting single-person train crews.

As train jobs have become increasingly automated, the companies have reduced crews from five members to two. With help from RWU, conductors voted down a contract with BNSF in September that would have allowed one-person trains.

And before that, engineers on the smaller Wheeling and Lake Erie Railway, members of the Locomotive Engineers (BLET), struck to stop imposition of single-person trains there. That case is before an arbitrator.

While the single-person crew issue has gained traction, railroaders often aren’t so enthusiastic about limiting hours. Like bus drivers and pilots, they’re paid by the trip.

“If you reduce the amount of hours or days we can work, that can potentially be a salary issue,” said Wright.

He said one Canadian contract with strong fatigue language was voted down by members for this reason. When the 2008 U.S. regulations went through, a lot of railroaders thought it would mean a $20,000 pay cut. Wright thinks that was overstated, but people who had been working massive overtime did take a hit.

This ambivalence among workers is one reason it may be better to institute national fatigue regulations than to try to manage fatigue through union contracts.

Another reason is that without federal regulations, non-union companies can undercut union ones. That’s what has happened in the intercity bus industry, infamous for several recent deadly accidents.

To start a bus company, you used to need federal approval for everything from stops to routes to fares. Those regulations were loosened in 1982. Now bus companies need only minimal knowledge of regulations, plus insurance.

This created a race to the bottom, said Jeff Rosenberg of the Amalgamated Transit Union, which represents Greyhound (including Bolt Bus) and Peter Pan drivers. He estimates half the industry is now mom-and-pop operations, many with only two or three buses, and very difficult to organize.

With all the competition, Greyhound has struggled, and wages in the industry have stagnated, Rosenberg said. As a result, drivers take second jobs to make ends meet, leaving them tired when they drive.

A lot of the overwork could be fixed, ATU says, if intercity bus drivers were covered by overtime pay protections. Surprisingly, they’re not, so they drive more hours or get additional jobs. The union is trying to get a change in the Fair Labor Standards Act so these drivers would be included.

Federal regulations limit bus drivers to 10 hours of driving. After 15 hours on duty (including non-driving time, like safety checks and loading baggage) they must be given an eight-hour rest period. They’re not allowed to drive after 60 hours on duty in seven days.

But the existing regulations are barely enforced against discount operators. After several fatal crashes of discount buses, a California TV news crew followed drivers of various bus companies and found they were driving for shifts as long as 20 hours.

“Unsuspecting customers simply do not know that they are riding with drivers who are falling asleep because they never rest,” writes ATU in a report on intercity bus travel starkly titled “Sudden Death Overtime.”

Jenny Brown was a co-editor of Labor Notes.jenny@labornotes.org
Related
Frustrated Over Contract, Locomotive Engineers Vote to Oust President »
Rail Machinist Opens Bid for District Presidency »
Every Union Contract Right Now Should Be the Best Ever »
Could We See a Rail Strike? »
'I Get to Have a Life': Pilots Speak Out on Contract Fights »