Fight Is On for Stable Hours 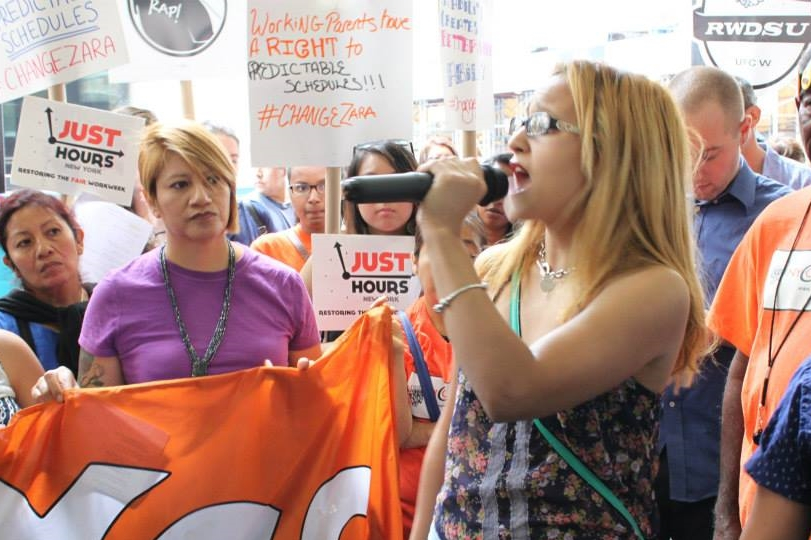 “Imagine how crazy your life would be if you only knew your hours two days in advance,” said Sharlene Santos, a worker at the Spanish-owned fashion outlet Zara in New York. She and other Zara workers rallied in late July outside the company’s flagship store on 42nd Street.

“We want predictable and regular schedules, job security, yearly raises,” she told the loud crowd crammed onto the busy sidewalk next to the store. “If Zara really respected us like the image they project, they would work with us.”

Santos is a member of the Retail Action Project, a division of the Retail Workers (RWDSU). RAP has been fighting for “Just Hours” for five years, even confronting employers with poster-sized “Underemployment Claims,” but the issue of erratic schedules is finally getting some traction nationally.

And big media took note when Maria Fernandes, a 32-year old woman with three part-time jobs at various Dunkin’ Donuts outlets in New Jersey, died of fumes from sleeping in her car between the shifts in her crazy-quilt schedule.

Most retail workers can relate. Fast food strikers and Walmart workers have made predictable schedules and adequate hours a top demand.

Pro-labor legislators have introduced bills federally, and while those have little chance of moving, San Francisco activists expect their Board of Supervisors will vote in their proposal in November. New York City’s comptroller also said he will move on the issue.

Walmart pioneered just-in-time scheduling, and now most fast food and clothing chains use computer programs that continually recalculate staff needs based on past patterns, the weather, or expected deliveries. Workers bend to the program’s dictates, ending up with short shifts, no shifts, or surprise shifts.

Erratic schedules show up in fluctuating pay. Iris Velasquez said she supports her mother and sister by working at Zara. Between shifts that get cut, and shifts where she gets sent home early, “I can’t save any money towards my aspirations,” she said.

Her hours were reduced to three days a week, usually six to seven hours a day, at $10.50 an hour. “I have worked other retail, it doesn’t have to be this bad,” she said at the rally.

But it is this bad for most retail workers. “Short Shifted,” a study released in August, surveyed 200 New York retail workers at stores with over 100 employees. Only 40 percent reported they have set, minimum hours per week.

A quarter of the surveyed workers said they are scheduled for “on-call” shifts—and most of those don’t know until two hours before their shift if they’ll be working. This causes havoc in scheduling childcare and other necessities, not to mention straining social and family connections.

Adding salt to the wound, retail workers say that while they are trying to get more hours, their employers are hiring new workers—who then suffer from the same half-a-job they do.

Since these jobs rarely have benefits, employers bear no extra cost hiring a large, hours-starved workforce. Bosses want minimal staffing but maximum availability if they suddenly need more people. The goal is to “maintain a pool of workers they can shift around at their whim,” said Mar.

New Yorkers have some protection, because the state requires most employers to pay at least the minimum wage for four hours if a worker shows up for a shift, effectively eliminating shorter shifts. Nine other states have a minimum “reporting pay,” so called because if someone reports for work, but there is none, they get paid something anyway. Federal labor law is silent on the subject.

Employers are also evading paying for benefits. The Affordable Care Act mimics private insurance in not requiring coverage for part-timers, defined by ACA as workers with fewer than 30 hours a week. Walmart announced October 7 that it would no longer offer insurance to these workers. Most couldn't afford it anyway, but 30,000 will be affected.

In San Francisco, Mar said, when activists talked to workers about raising the minimum wage, “they said even $15 is not enough for them to achieve economic security… they needed full-time work and fair work schedules.”

The proposed Retail Workers Bill of Rights would relieve the main hardships of computer scheduling. Before hiring more people, chain retailers, restaurants, hotels, cell phone stores, and banks would be required to offer full-time jobs to their existing part-time workers.

These businesses wouldn’t be allowed to pay part-timers less for the same work. When companies changed hands, workers would be retained for 90 days.

But the most impact would come from this provision: Workers who weren’t told their schedules with proper notice would get premium pay. For example, said Mar, “If there’s less than 24 hours’ notice, which actually happens a lot, they’d have to pay for four hours if the shift is cancelled.” Suddenly-added shifts would carry a premium, like overtime pay.

Unionization is an obvious solution to terrible schedules, but that seems far away in most cases. However, between 2007 and 2011, RWDSU activists organized dozens of New York-area H&M stores, the world’s second-largest clothing retailer. The Swedish company was mostly neutral during the effort and 1,500 area H&M clerks are now union.

Their contract says their schedules must be posted a week in advance and can’t be changed without the worker agreeing.

Similarly, 250 New York bike-share workers recently unionized with Transit Workers Local 100. Their company maintains 6,000 bicycles for commuters to rent at 330 stations around the city. One of the workers’ main complaints was inconsistent scheduling and short notice, problems that are “easily resolvable” at the bargaining table, said Local 100 President John Samuelson.

The demand for “open availability” is another problem, workers say. Walmart workers report that if they add a job or try to take classes, their Walmart hours can evaporate.

Tiffany Beroid, a Walmart worker from Laurel, Maryland, testified in July at a hearing on the proposed federal Schedules that Work Act.

Beroid said she asked Walmart for schedule changes so she could take classes part-time: “I didn’t ask for anything crazy, just for tiny modifications.” For not being available 24/7, Walmart punished her by cutting her hours.

“It was so bad that I couldn’t pay for school anymore and I needed to drop out halfway through a semester,” Beroid said. “I lost all the credits and the money I spent.” When she joined with other members of OUR Walmart to denounce the practice, Walmart fired her.

OUR Walmart is the group responsible for several one-day strikes, including during the post-Thanksgiving shopping spectacle known as Black Friday. It was started by the Food and Commercial Workers (UFCW)—parent union of RWDSU—to stem Walmart’s low-road business model that has been undercutting supermarkets where UFCW members work. Walmart’s entry into the Southern California grocery market cost grocery workers an estimate $2.8 billion a year in lowered wages and lost benefits.

In some cases, the policies seem less like cost-cutting and more like a system to trap people in low wage work.

Recalling her experience trying to attend college, Beroid said, “Walmart did everything it could to keep us in poverty and keep me from getting an education.”

A version of this article appeared in Labor Notes #428, November 2014. Don't miss an issue, subscribe today.

Jenny Brown was a co-editor of Labor Notes.jenny@labornotes.org
Related
Whatever Happened to 'Eight Hours for What You Will'? »
NLRB Hearing Officer Recommends Rerun of Amazon Bessemer Election »
TV Review: The Class Struggle at Superstore »
Inside the Alabama Amazon Union Drive: An Interview with the Lead Organizer »
The Grocery Companies Denied Us Hazard Pay—So We Went Over Their Heads »