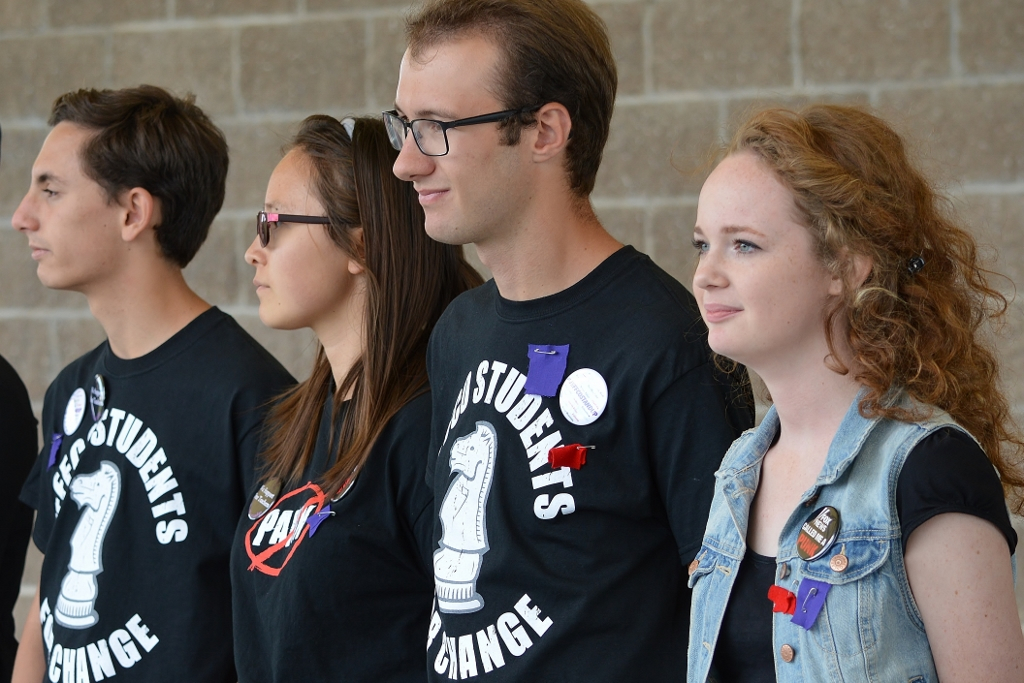 Teacher, student, and parent protests in suburban Denver drew national attention to a battle against curriculum censorship—but it took several blows to come to this point.

First, the newly elected and ultra-conservative school board majority in Jefferson County came for the teachers and their union. The board rescinded an agreed-upon pay raise and pushed through a new system linking teacher pay to student performance on standardized tests.

Then the board diverted millions of dollars, raised for public schools through a ballot measure, to charter school expansion. Then it refused to fund kindergarten expansion that would benefit low-income kids.

The last straw was when the school board created a committee to review its Advanced Placement (AP) U.S. history curriculum, which conservatives had criticized as not being patriotic enough.

The wave of protests began when one-third of teachers at Standley Lake and Conifer High Schools called in sick. Even with classes cancelled, 100 students rallied in the morning in front of Standley Lake. The board blamed the teachers union for the unrest—but the student actions that spread across the district’s high schools proved difficult to ignore.

The next week began with 100 students at Evergreen High School rallying against the attacks on their history curriculum. By Tuesday student walkouts happened at six schools; by Wednesday 1,000 students from the district’s major high schools in Littleton converged.

The next week more teachers stayed home, causing Golden and Jefferson High Schools to cancel classes. Student walkouts and protests continued into October. Four hundred parents, teachers, and students poured into the October 2 school board meeting where the curriculum change was to be voted on.

“People in this county are frustrated,” said Shawna Fritzler, a parent and the district accountability chair for the school board. “This is the last straw. Enough is enough. Get the Republican committee out of our schools.”

Fritzler, a registered Republican, joined with other parents to form Support Jeffco Kids to organize the community that’s unhappy with the direction of the new board.

“The board has decided all of this is a union issue,” she said. District leaders dismiss criticism of the board’s decisions as part of the teachers union agenda, “so parents don’t exist anymore; neither does the community.”

The main issue was a proposal by one board member to create a committee that would review the district’s AP History curriculum, part of a national course recently updated by the College Board, the education company that manages the AP program.

Board member Julie Williams proposed that a history course must “promote citizenship, patriotism, essentials and benefits of the free enterprise system, respect for authority and respect for individual rights.

“Materials should not encourage or condone civil disorder, social strife or disregard of the law. Instructional materials should present positive aspects of the United States and its heritage. Content pertaining to political and social movements in U.S. history should present balanced and factual treatments of the positions.”

Parents and teachers responded that this raised concerns of academic censorship—and also that if an AP course were changed, students would not be prepared for the exam, reducing their chance of receiving the college credit that doing well on the exam allows.

“Students are upset. It’s wrong to try to change the history class,” said Columbine High School senior Kyle Ferris. “From an academic level we will lose the AP designation. We won’t be able to take the AP test.”

The committee would also review the curriculum for elementary health. Parents fear the board could try to impose anti-science, anti-sex education politics.

The parent-teacher association unanimously voted to oppose the proposed curriculum review committee, just the latest in a series of dramatic measures the school board has attempted since a conservative majority was elected last year.

“They just want to take advantage of their power to push their views on us,” Ferris said. “I don’t think they have the students’ well-being in mind.”

A few students got together to plan the walkout at Columbine. Ferris made a flyer and leafleted in the morning before school. Others announced it on social media.

“I stood up on a bench and shouted what we were doing,” he said. When they found out neighboring Dakota Ridge High School was having a walkout at the same time, students from both schools met halfway on a bridge.

They waved signs from the overpass: “We love our teachers,” “Don’t make history a mystery,” “Protest is patriotic.”

Earlier conflicts set the stage for the protests. The teachers union reached a tentative contract agreement with the district on economic issues in May 2014—but the board rejected what its own negotiators had agreed to.

The board demanded to take the issue through a fact-finding process, similar to mediation. But in September it rejected the resulting report, which had sided with the teachers. Instead the board voted in its own plan, tying teacher raises to student test scores.

Teachers had been working under a pay freeze they’d agreed to in order to help the district get through the recession. “Teachers took a 3 percent pay reduction,” said Fritzler.

With other parent activists, Fritzler had campaigned for and won ballot measures to increase property taxes to generate $29 million for Jefferson County schools—and to address the teachers’ salary needs.

“We promised them a restoration of [the 3 percent cut], and promised them new funds for a step increase, in accordance with their contract,” she said.

Instead, now teachers will receive a percentage wage increase based on their rating of ineffective, partially ineffective, effective, or highly effective.

Many believe the school board’s actions intend to drain public schools of funding while promoting privatized education via charter schools.

“Their message is Jefferson County [public school system] is broken and we need to fix it,” said Matt Landon, a seventh grade social studies teacher at Summit Ridge Middle School. Saying a school district is “in crisis” is a way for corporate education reformers to assert the need to privatize and go after teachers unions.

Jefferson County is an affluent suburb of Denver, its residents a mix of Republicans and Democrats. It doesn’t match most locations targeted by reformers. The district’s high schools have an overall 81 percent graduation rate, compared to Denver’s 61 percent.

“This is this fallacy, that this is a broken school district. It goes along with the fallacy of the ineffective teacher,” Landon said. “This is a nationally recognized school district.”

Conservatives are making a push to take over school boards in many area communities. A neighboring district, Douglas County, has become a model for conservative education interests. New candidates there won with the help of large donations from the national pressure group Americans for Prosperity.

The newly-elected board there channeled millions into a voucher program, ended dues deduction out of teachers’ paychecks, refused to bargain a new contract, and implemented merit pay.

Jefferson County’s board has increased charter school funding by nearly 50 percent and vetoed funding for free full-day kindergarten, a program that would especially benefit low-income parents and students. Critics say the board has dodged transparency and even put a high-priced lawyer on retainer, all while claiming to carry out a mission of fiscal conservatism.

While all these actions angered many parents and teachers, none had quite the effect of the questions about what material would be taught.

“This is what brought out the ire of the community,” teacher Landon said. “How dare you censor what my kids learn?”

Despite vocal protests at board meetings and at schools, the board voted up the proposed curriculum review committee, with a few minor changes. Teachers and parents countered with a large protest, “Boots on the Boulevard,” along a busy, visible avenue.

Outraged parents and students have also gathered signatures and are considering a recall campaign against the three objectionable board members.

A version of this article appeared in Labor Notes #428, November 2014. Don't miss an issue, subscribe today.

Samantha Winslow is co-director of Labor Notes.samantha@labornotes.org
Related
Teachers Strike against a ‘Heartless’ School Board in Biden’s Hometown »
From Contract Rejection to Union Office: School Therapists Keep Up Push for Fair Deal »
Viewpoint: The AFT Shouldn't Be Negotiating Away Puerto Rican Teachers' Pensions »
Why Did California's Tax the Rich Measure Lose? »
Collective Action Is How We Shake Ourselves Free of Pandemic Isolation »