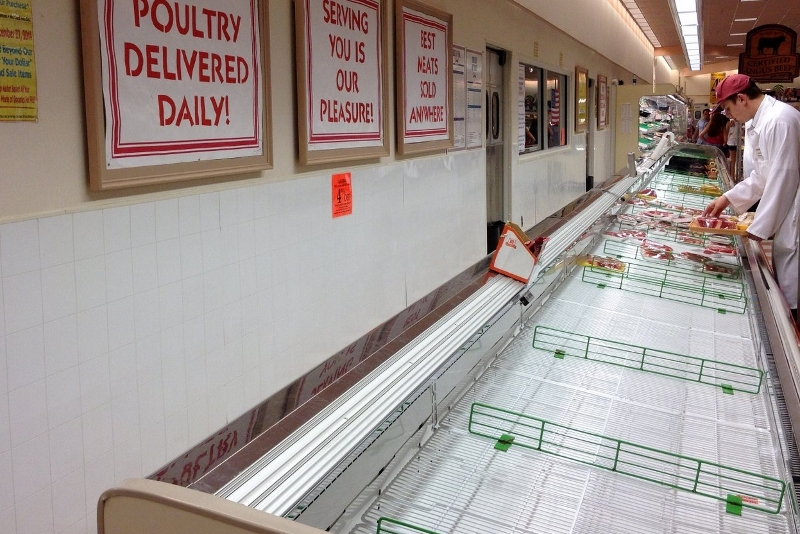 A boycott and strike should look like this: Empty shelves and empty stores. Photo: Rand Wilson.

After prolonged negotiations and last-minute haggling, a settlement of the Market Basket dispute was announced on August 27, bringing to a close one of the most dramatic and inspiring recent labor struggles in the U.S.

The power of a united and strategic workforce acting forcefully with broad consumer support rocked the whole of eastern Massachusetts as well as the company’s stores in New Hampshire and Maine.

In a highly unusual management-led action, employees paralyzed the company’s 71 stores and promoted a devastating consumer boycott to get previously fired CEO Arthur T. Demoulas back. They won, forcing the sale of Market Basket back to Arthur T.

Most of the 25,000 workers, from part-time checkers to big-shot regional managers, returned to work immediately. In fact, during the dispute, many of the checkers and in-store personnel worked, converting their stores and parking lots into protest platforms where the few remaining customers were engaged in intense discussions about the Market Basket dispute.

Where once the walls of a store were adorned with promotional ads, now they were decked out with signs extolling the virtues of “Arthur T.” and workers’ desire to maintain his business model over that of his cousin Arthur S. Demoulas. Part-timers were laid off after four weeks, but many continued to picket, and have now returned to work.

The strike was a strategic one, by a combination of key workers in trucking and warehousing and top and middle managers. Their industrial actions prevented any perishables from reaching the stores. Market Basket became nothing but a big dry goods chain.

Threats of firing from top management and numerous “drop dead” days for employees to return to work came and went, virtually ignored by the workforce.

Would the workers have been better off in a union? Yes, of course. There is no substitute for the power and voice that collective bargaining provides for workers.

Yet the great irony here is that if Market Basket workers had been in a union, it’s nearly impossible to imagine them striking to restore their fired boss and defeat the Wall Street business model of his cousin Arthur S. A no-strike clause and the narrow post-WWII vision of our labor unions would surely have prevented that.

Also, warehouse and trucking is usually with the Teamsters in unionized grocery stores. The decision to respect UFCW picket lines is not always forthcoming, and is sometimes impossible because of contract language.

Several employees filed an NLRB charge arguing that top management’s threats against them constituted a violation of their Section 7 rights to protest and redress their “wages, hours and working conditions.”

If a settlement hadn’t been reached, a National Labor Relations Board Administrative law judge would have had to rule on whether the discharge of the CEO constituted a “unilateral change in working conditions.” The employees certainly saw that it did—and put their jobs on the line because they saw their own conditions bound up with who was their CEO.

Below are some lessons the rest of the labor movement can draw from this extraordinary struggle:

Not all workers pack an equal punch. Strategic workers in trucking and warehousing are crucial to interrupting the flow of goods, particularly perishables. Current labor laws exclude many of the most strategic workers, making meaningful strike activity much harder.

Don’t surrender ‘management rights.’ Unfortunately, not since the UAW’s Walter Reuther has the U.S. labor movement sought any real say over operating and management decisions. Instead, we’ve surrendered to the narrow “management rights” clause written into virtually every union contract. Yet these decisions, as the Market Basket workers demonstrated, are crucial to the livelihoods of workers.

A real strike stops production. Campaigns at Walmart and in fast food have called the exit of a handful of workers from stores and fast food outlets “strikes.” But most have failed to stop production. Market Basket workers (management and labor) engaged in a true “strategic strike.” The photos of empty shelves and empty stores were a compelling image that needed no virtual enhancement or Facebook “likes” to be real.

Some managers are really workers. U.S. labor law draws the line about who is a “worker” very narrowly. Millions of actual workers are labeled supervisors and excluded from unions and the protection of the National Labor Relations Act. That exclusion leaves unions much weaker. This action blurred the lines, and thus the workforce had more power.

Community support is key. The depth of support shown by the massive boycott, where customers taped their receipts from Stop and Shop, Whole Foods, and Hannaford’s to the windows of Market Basket, was an essential part of the victory. For many customers the boycott was a deep hardship, but the passion and energy of the workers underlay consumers’ commitment, despite Market Basket’s low prices, to stay away until victory.

Union or “not-yet-union,” one fundamental lesson is that there are no shortcuts to deep organizing at the point of production. Labor strategists and organizers impatient with that process, who believe social media and corporate leverage can substitute for the basics, are doomed to failure.

After this monumental struggle, Market Basket and its workers will never be the same. To reach a settlement, Arthur T. enlisted a private equity firm, the Blackstone Group, to buy a third of the company. As a result, the Market Basket culture and its manager’s paternalistic practices may significantly change.

Meanwhile, the workers’ expectations have never been higher, and the sense of their power—even without the managers’ support—can’t be denied. The vast majority of these workers are part-time and low-paid. The UFCW is actively reaching out to enlist support. Stay tuned, because there is undoubtedly much more to come.

Peter Olney is the retired organizing director of the International Longshore and Warehouse Union (ILWU). Rand Wilson is currently on the staff of SEIU Local 888 in Boston. They have both been active in community-labor coalition-building for more than 30 years. This article first appeared on Stansbury Forum.

A version of this article appeared in Labor Notes #427, October 2014. Don't miss an issue, subscribe today.
Related
Strike Wave Rocks Britain, as Unions Confront the Cost-of-Living Crisis »
‘No Contract, No Matisse’: Philadelphia Museum of Art Workers Win First Contract After Strike »
UFCW Reformers Look to 2023 »
The Right to Strike Is at Stake on the Railroads »
Trader Joe's Union Campaign Takes Two Steps Forward, One Step Back »

In the September issue of ZMAG there's an interesting article by Bill Menitz entitled," Market Basket Revolt". My comment is intended only to add to the discussion around the employees of Market Basket. http://zcomm.org/zmagazine/market-basket-revolt/

Thanks for posting Bill Menitz's article. It's a good article, but I think it exaggerates a bit on what a great place MB is to work.

Why were the workers so anxious to have Arthur T instead of Arthur S? You said Arthur S had a "Wall Street business model"--not unusual. How is Arthur T's model different?

Arthur T clearly has had a more paternalistic approach to the MB workforce. He's popular because he goes out of his way to meet with lots of employees and provides slightly better wages and benefits to some workers. On principle, I am generally against bonuses, they are a one-time event with no long term benefit to a workers' compensation. But MB's bonuses have been generous and make some employees happy.