Defend (and Understand) Your Transgender Members 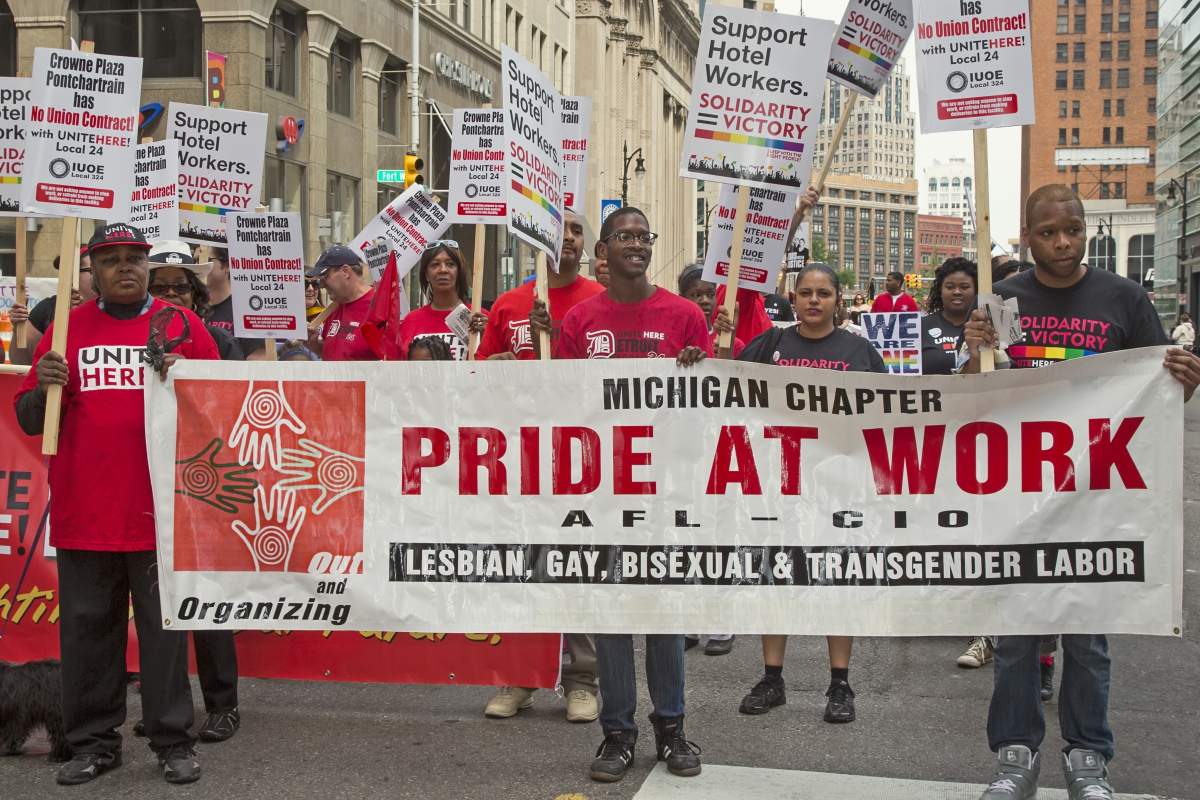 Pride@Work, the AFL-CIO's organization dedicated to helping lesbian, gay, bisexual, and transgender workers, can help a local make sure its transgender members feel safe and respected at the hall and at the workplace. Photo: Jim West/jimwestphoto.com.

My building trades organizer friend didn’t exactly have the language, but he knew the worker was in trouble:

“She said she went to work looking like a woman, and the supervisor told her he didn’t want people like that working there.”

This was new territory for my friend—trying to help out a transgender worker—but he knew his job was the same as ever: protect her rights.

Transgender people are a workplace reality. And some unions, like the Communications Workers (CWA) and Service Employees (SEIU), have long advocated for transgender workers.

SEIU passed a resolution in 2012 vowing to provide its members health insurance covering transgender-specific needs, such as hormones, mental health care, and different surgeries that some people use for transition.

CWA submitted an amendment to the AFL-CIO constitution, ratified in 2013, explicitly stating that the federation encourages transgender workers “to share equally in the full benefits of union organization.”

These examples are impressive and remarkable. But not every union, and not every local, has the knowledge required to make transgender workers feel safe and respected at its hall and in its workplaces.

Thankfully, the basic facts of transgender life are absolutely understandable by the non-trans public. Here are some basic points that all union members—in fact, all people—should know.

For transgender people, the sex marker we were given at birth doesn’t match who we feel ourselves to be. Everybody gets declared male or female at birth. For most people, that label doesn’t seem like a conflict. If you’re not trans, your birth sex is the same as your gender identity, or your internal sense of maleness or femaleness.

For transgender people, our birth sex differs from our gender identity. The doctor said I was a boy at birth, but as time went on, I didn’t feel comfortable being seen as a boy. I preferred wearing girls’ clothes. I preferred people calling me “she.”

I wasn’t the boy the doctor said I was. So I’m transgender.

Transgender men are people who were labeled “female” at birth, but who live as men.

Transgender women are people who were labeled “male” at birth, but who live as women.

Being transgender doesn’t necessarily mean you’ve had a medical procedure, like genital surgery. People transition in all sorts of ways.

There’s social transition, where trans people come to accept their gender identity as differing from their birth sex. For example, think of someone whose birth sex is female, wearing men’s clothing.

In other words, social transition is a person’s social steps to understand themselves—and live in the world—as their actual gender identity.

Legal transition refers to the steps that people take to be legally known as their correct gender identity. Since my birth certificate and legal records said I was male, I had to change that. I received a court-ordered name change, then changed my name and gender with the Social Security Administration.

Medical transition refers to the medical steps that people take to make their body align with their gender identity. This may involve taking hormones—like transgender women taking estrogen and testosterone blockers, or transgender men taking testosterone.

It may involve surgeries, and there are many kinds. Transgender men frequently have their breasts removed. Because genital surgery (creating a vagina from a penis, or vice versa) is expensive and not covered by a lot of insurance policies, many people never get it.

Some people are transgender but never take these medical steps. Every trans person’s transition is different.

WHAT UNIONS CAN DO

As Seattle grocery worker Lincoln Rose transitioned from female to male, he ran up against discrimination from management. Human Resources insisted on walking him to and from the bathroom, and made him hang a sign on the bathroom door whenever he went inside.

It was a stressful and humiliating time for Rose. It was also hard on his co-workers, who were angry seeing him mistreated and at first felt powerless to help. A local union rep said nothing could be done.

But with the help of an ally from Pride@Work, Rose and his co-workers made the kind of noise that got union leadership to listen. After they started a petition drive, their local negotiated new contract language prohibiting this kind of discrimination.

Rose’s strongest advice for fellow transgender workers and others facing discrimination? “Don’t discount anyone. Some of my strongest allies were straight, older, married women, people who had been in the union all their lives.

“One of them told me, ‘When they treat you like this, they make the union look weak to all of us.’” (Read more of his story in Labor Notes’ A Troublemaker’s Handbook 2, pp. 49-50.)

And this year, 13,000 University of California graduate student workers in UAW Local 2865 won contract language that ensures members have a right to all-gender restrooms within a reasonable distance of their workspace. It also establishes ongoing labor-management meetings on the issue.

The union is pushing to interpret this language to set up at least one all-gender restroom in each campus building. Not only members of the union but all campus workers, students, and visitors will benefit.

The bathroom mandate is part of a package of changes the union’s Anti-Oppression Committee pushed for. Other wins included longer paid parental leaves, a larger child care subsidy, a new committee to equalize opportunities for undocumented students, and lactation stations for nursing mothers.

Here are some basic ways to make your international, district council, or local union more knowledgeable about, and protective of, its trans members.

Accept everyone’s self-professed gender identity. If a member you used to know as a woman named Danielle says that he is a man named Daniel and would prefer to be referred to as “he, him, and his,” treat Daniel as he asks.

If someone says they are genderqueer and would prefer the pronouns “they, them, and theirs,” do that. Some people may ask to use pronouns you’ve never heard of. Do your best to use them.

If you use the wrong pronoun, apologize quickly and sincerely, and move on.

Give your union Brothers, Sisters, and genderqueer Siblings this article. Discuss it at a carefully and respectfully moderated meeting.

Inventory your union hall and job sites to make sure they’re transgender friendly. Make bathrooms and traditionally gender-segregated facilities “gender-neutral,” so people of any gender identity know that they can feel comfortable using the facilities.

Add “gender identity and expression” to your contract’s nondiscrimination clause, along with categories like race, gender, and sexual orientation.

If a boss refuses to respect a worker’s gender identity in any way, as in the example at the beginning of the article, make that a violation of the contract and treat it as you would any other contract violation.

You could also make a boss’s refusal to have gender-neutral facilities a contract violation. (See box.)

Bargain insurance policies that are transgender inclusive. Sometimes policy exclusions say they will not cover transgender people, or they exclude medical treatments used for transition. Get rid of exclusions.

Make sure health insurance covers all transgender-related treatments outlined in the most recent edition of the World Professional Association for Transgender Health’s Standards of Care.

Make sure your trans members and their partners can get life insurance coverage, too. I’ve had trouble myself getting underwriters to understand my gender identity, and I imagine I’m not alone in this.

For more help, you can contact your local chapter of Pride@Work, an AFL-CIO organization dedicated to helping lesbian, gay, bisexual, and transgender workers. You can also review educational materials put together by the National Center for Transgender Equality. If you’re in New Jersey, give me a call.

Transgender issues might be new to you, but you can understand them—and you have to, if you’re serious about justice for workers.

Andrea Bowen is executive director of Garden State Equality, a New Jersey organization advocating for lesbian, gay, bisexual, and transgender people. She was a strategic researcher for the Ironworkers Union. Reach her at (973) 298-1295 or bowen [at] gardenstateequality [dot] org.