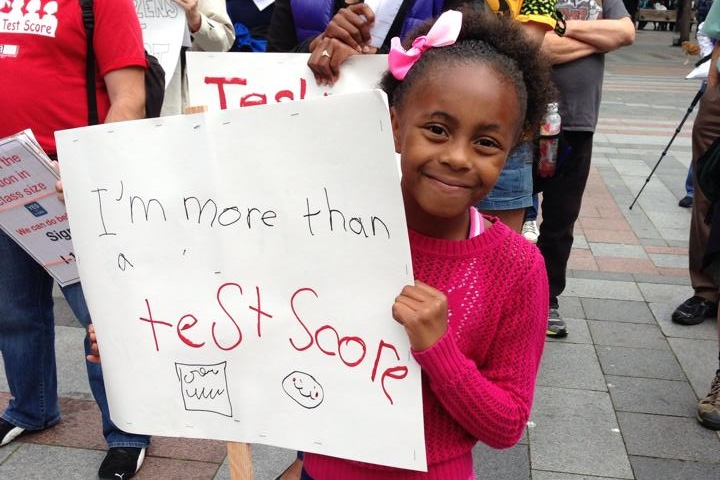 Teachers, and some of their unions, are fired up about the new Common Core State Standards.

The Gates Foundation spent more than $200 million bankrolling the creation of the new standards and lobbying for them. The group has long pushed to tie teacher evaluations to student test scores, to promote “accountability.”

Yet even the Gates Foundation recently called for a two-year delay in linking Common Core results to consequences for teachers and schools. The shift comes after both national teachers unions pivoted from strong support for the standards to a more critical stance—a response in part to grassroots teacher frustration.

The AFT and NEA had supported the creation of national standards and worked closely with Gates, including accepting millions of grant dollars. Teachers received glossy mailings from their unions promoting the Common Core. Now the AFT has announced it will no longer accept Gates dollars for its “innovation fund” to promote the new standards.

“There are teachers that do. However, the reality is, a lot of teachers don’t have information about where these standards came from.”

There’s debate among teachers about the idea of replacing the status quo, state standards, with national ones. But the implementation has been roundly unpopular.

Forty-five states and the District of Columbia have adopted the national standards, which cover English and math. Students will be tested on them every year, kindergarten through 12th grade.

Lessons at all grade levels are supposed to advance college- and career-readiness. That’s a big change in how to approach teaching, say, kindergarten.

The Chicago Teachers Union has denounced the standards and vowed to lobby to overturn them. (Illinois adopted the Common Core in 2010.)

CTU objects to the standards being developed by testing and curriculum-publishing corporations and the Gates and Broad Foundations, not by rank-and-file teachers. It also says the standards were implemented too quickly and do not reflect the learning needs of many students, particularly English-language learners, low-income students, and students of color.

Labor Notes asked Milwaukee teacher and instructional coach Ingrid Walker-Henry to weigh in on what the new benchmarks mean for teachers and students. The interview has been edited for length and clarity.

Labor Notes: How is the Common Core going to affect your day-to-day teaching?

Walker-Henry: Milwaukee Public Schools has been in process of implementing Common Core standards for two years now, so it’s in everything we do. It’s in the professional development I give to staff.

In the past Wisconsin had state standards for only fourth, eighth, and tenth grades. So as a teacher, if you were in grade three, you would look at fourth grade standards and figure out what you were supposed to teach.

The Common Core allows, “This is exactly what I’m supposed to be teaching at this grade.”

Can you give me some examples of what the standards actually are?

I'm going to tell you why I can’t: they are very detailed. In fact, it’s very dense language even for a teacher to read.

They do something called unpacking the targets, or the standards. So we will actually sit down and talk about the math involved or what you would do with the reading. It’s very dense language. It definitely isn’t parent-friendly, and it’s not exactly teacher-friendly. It requires some thought.

People like to say that standards should say, “The student will be able to add and subtract 100.” That’s what our old standards said.

Well now, when you read it, the new standards have more filler words, more verbiage, there are a lot more parts to it.

Are there parts of it you are more critical of?

I have more experience looking at the math standards. I think it is good in that it is something that we didn’t have, so as a first grade or second grade teacher it specifically says I should be working on these types of skills with my students. The part I’m not that crazy about is some of the skills don’t seem developmentally appropriate.

What that means is that a child at that age might not be able to grasp that concept. It’s not that they can’t [later], it’s that their brain isn’t really ready for that. We should have high standards, but is it something that’s going to end up penalizing schools and penalizing teachers because students aren’t meeting this set of standards?

Common Core proponents say the standards have nothing to do with testing. Is this true?

You have this set of standards that states are supposed to work under, so how do you find out if people are teaching them, and if kids are learning them? You have to test. Yes, I do think it’s all tied together.

It’s not just the tests, it’s the textbooks. In Wisconsin, especially in the district of Milwaukee where we’ve been implementing the Common Core standards, guess what: our textbooks don’t match the standards.

How do you respond to the idea that teachers and kids just don’t like raising standards because it makes things harder, that we are holding back students by not pushing them?

As a teacher I have to say I don’t think we’ve ever been scared of hard work. Working, some of us with 35 kids in the class, and trying to get them to accomplish a singular task—hard work is not the scary part at all.

As a parent, I would have the concern that, “So my kid is supposed to learn these things. Every kid is different. Maybe my kid doesn’t understand something this year, maybe they will understand it next year.

“What kind of effect will this have on my child? Are we talking about whether they go on to the next grade?” I would be concerned.

How do Common Core and the related assessments connect to race and class? How will they impact schools in low-poverty versus high-poverty areas?

In high-poverty schools more than anything, we already know those test scores and everything else—they don’t usually fare well. They’re usually the basis that people close schools and get rid of staff, so that’s always a fear.

The other part is, you’re putting all of these standards in place and that’s great, [but] you also have to recognize that there are children coming to school with a disadvantage. What are you doing to help support that?

And that usually ends up falling on the district, which usually doesn’t have a lot of money to support students or teachers. You’re going to end up with schools that are failing, now they are not going to meet the Common Core standards, and what are you going to do about it? Probably nothing but fire staff, maybe close a school—but it really hasn’t addressed any of the issues.

What would make a difference to increase the number of students meeting whatever standards are in place?

Good practice, and especially good practice in areas of high poverty, would be to have smaller class sizes.

It would be to provide extended learning days, tutoring, mentoring, to meet the needs of the child. To say, “I know that this child maybe has health issues, how am I going to assist the child with that?”

To just say, “We’ve got these standards here, and everyone is going to be able to meet them, and if they don’t then we have a faulty teacher or we have a faulty kid”… that’s not beneficial, it’s not going to help them, and really it’s just the same system we have now.

One of our concerns is that in Wisconsin, the state legislature was trying to say, “We are going to repeal the Common Core, we are going to write our own.” And I’m like, “Hold up, because as much as you may or may not like it, I don’t want you writing standards. You are not a teacher.”

Teachers need to have their hands on it. And it’s not something that can be done in a couple of months.

Some proponents have gone as far as to say we are holding back low-income students and students of color, and that Common Core standards will address that. How is that true or false?

Words on a page is not an education. Words on a page do not substitute for the fact that a kid from an impoverished area has a vocabulary thousands of words less than a child in an affluent area, when they are four years old.

That’s not going to fix that problem, it’s going to make it more of a glaring problem.

I'm thinking about the area I work in, it’s a very tough area to teach in. These kids have post-traumatic stress syndrome. We deal with kids who have seen a cousin get shot in front of them. And so education is not necessarily foremost. We have first graders who literally will tear apart your room because they are angry.

So I can have the standards. That’s not going to fix the final problem, which is a barrier to learning.