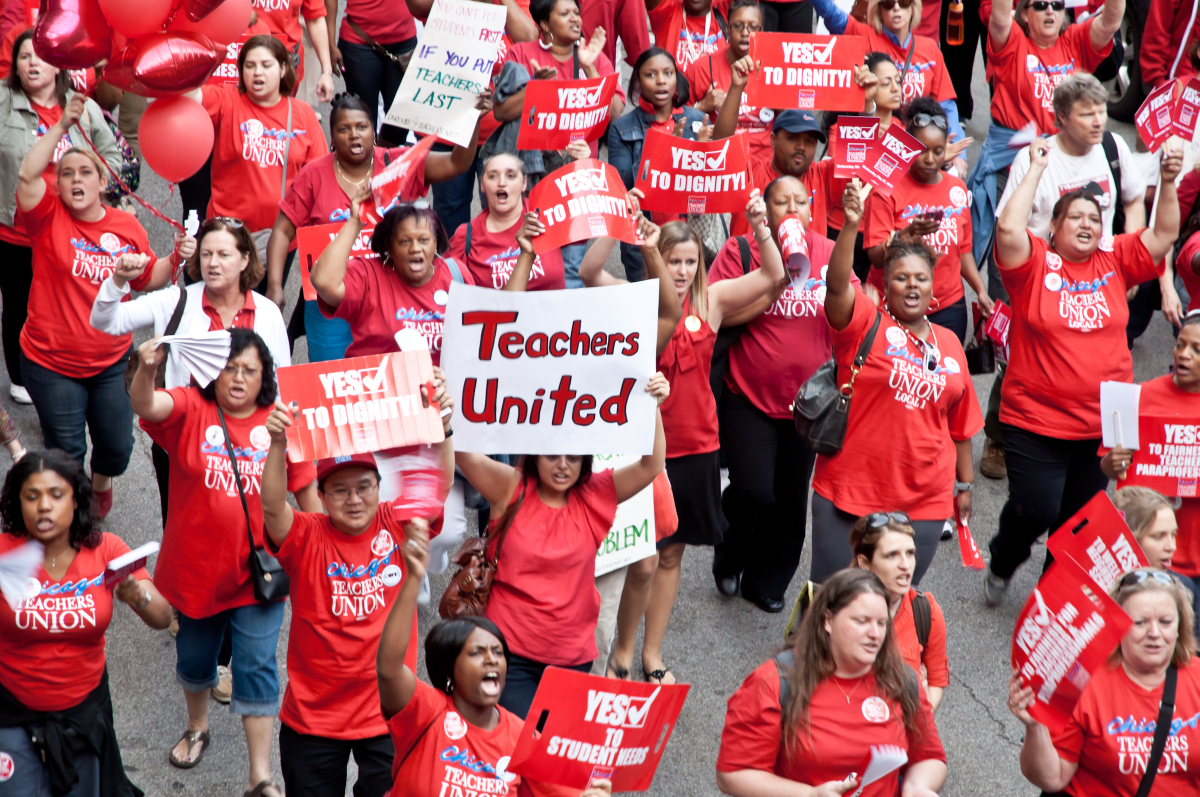 A May 2012 march, before the Chicago Teachers' September strike, featured a sea of red shirts. Photo: Sara Jane Rhee, loveandstrugglephotos.com.

Our new book, How to Jump-Start Your Union: Lessons from the Chicago Teachers, shows how activists transformed their union. This excerpt tells a little about the contract campaign that built momentum for their 2012 strike.

The new leaders of the Chicago Teachers Union had begun laying the groundwork for a contract campaign the moment they took office. But as their second school year began, they had to shift into higher gear. By June the union would need to win a strike vote—and be ready to follow through.

This meant thousands of one-on-one conversations between leaders in the schools and their co-workers, to assess, re-assess, and re-re-assess their support. It meant charts on the union office wall to keep track of every school and every delegate (steward). “We did a lot of counting,” Organizing Director Norine Gutekanst said later.

One person per school would be the Contract Action Committee head, in touch with all committee members in her building. Each committee member was then responsible for staying in regular touch with about 10 fellow employees, in a phone-tree-like structure. Those contacts might include not only CTU members but also school staff represented by other unions. Members were also asked to reach out to supportive parents.

CTU’s 50 “district supervisors” (super-stewards) formed a next layer of leadership. Once a month, each would call all the delegates in her geographic group to pass on the latest talking points and find out how things were going. This ongoing relationship became a key element of the campaign.

Taking the letter around gave members a chance to practice their organizing skills and boost their confidence. Delegates were also spreading the word that union supporters should wear red every Friday—an informal way to warm people up for bigger mobilizing.

Both activities served as tests of the organizing network.

The genius of the “wear red” tactic was its simplicity. It was something concrete and low-risk that a committee member could ask anyone to do, even someone who had no extra time. The visibility helped alleviate fears: co-workers could see for themselves the growing level of union support.

At first, many people would just wear a red scarf or a red-patterned blouse on Fridays. But as excitement and confidence grew, more and more ordered red CTU T-shirts.

Administrators noticed. Students noticed. Members loved it. Many sent in group photos of themselves at their schools, all in red, for the union website.

Of course, while some schools were solid red on Fridays, others were not. The district supervisor’s role was to check in with the leaders at each school and find out: Were people wearing red? Were they signing the open letter? What roadblocks were committee members running into?

At the union’s spring training conference, committee members went through the members at their schools name by name—assessing whether each person was wearing red, would come to an action, and would vote yes for strike authorization.

Organizer Matthew Luskin remembers, “Our message on assessing was that assessments are moving targets. The job of the delegate was to have a plan on how to move people. We offered them skills about how to overcome obstacles.

“It was empowering to people to realize that they could build support with these skills, rather than just lament the places it was missing.”

A state law had passed in 2011 requiring CTU to get yes votes from 75 percent of all members (not just those voting) before calling a strike. This was supposed to be impossible. “In effect they wouldn’t have the ability to strike,” gloated Jonah Edelman of the corporate education reform group Stand for Children, which pushed for the rule.

CTU leaders were convinced it was possible—but no one could deny it was a tall order. They couldn’t go into the vote cold.

In early spring a delegate decided to conduct a straw poll at one school on whether to strike: “a stroke of brilliance,” said staffer Debby Pope. When the result—a unanimous yes—was announced in a delegates meeting, the response was “electrifying.” Other schools soon followed suit with their own mock strike votes.

But the union needed a comprehensive snapshot of its strength, in all schools at once, to test whether the rank-and-filers could drive turnout on this scale. So the committees took a formal, district-wide dry run.

Delegates received paper ballots and instructions. They ran the vote, tallied the ballots, and phoned in the results. Organizers compiled the numbers on giant wall charts in the union’s central war room.

The ballots had a four-question poll with questions designed to elicit a yes (“Do the Board’s bargaining proposals disrespect CTU members?”)—without actually invoking the word “strike.” That way the union could use the vote results in public communications that emphasized the issues.

The answers would, of course, be overwhelmingly yeses. The important number would be how many ballots the union could collect. The schools with fewer ballots returned would reveal where organizers needed to focus most.

The numbers came back strong: Ninety-eight percent rejected the board’s proposals, with more than 80 percent participating. Many ballots bore comments like “We must go on strike!” or “I’m ready to strike!”

The various assessments—the T-shirt days, the open letter, the mock strike vote, and a citywide rally later that month—were all “tests we created for ourselves,” as Potter put it. And CTU was passing its own tests with flying colors. The union was ready for the contract campaign’s climactic hurdle: the strike vote.