Auto Parts Workers Strike for Recognition, Strategy Was to Shut Down Assembly Plant 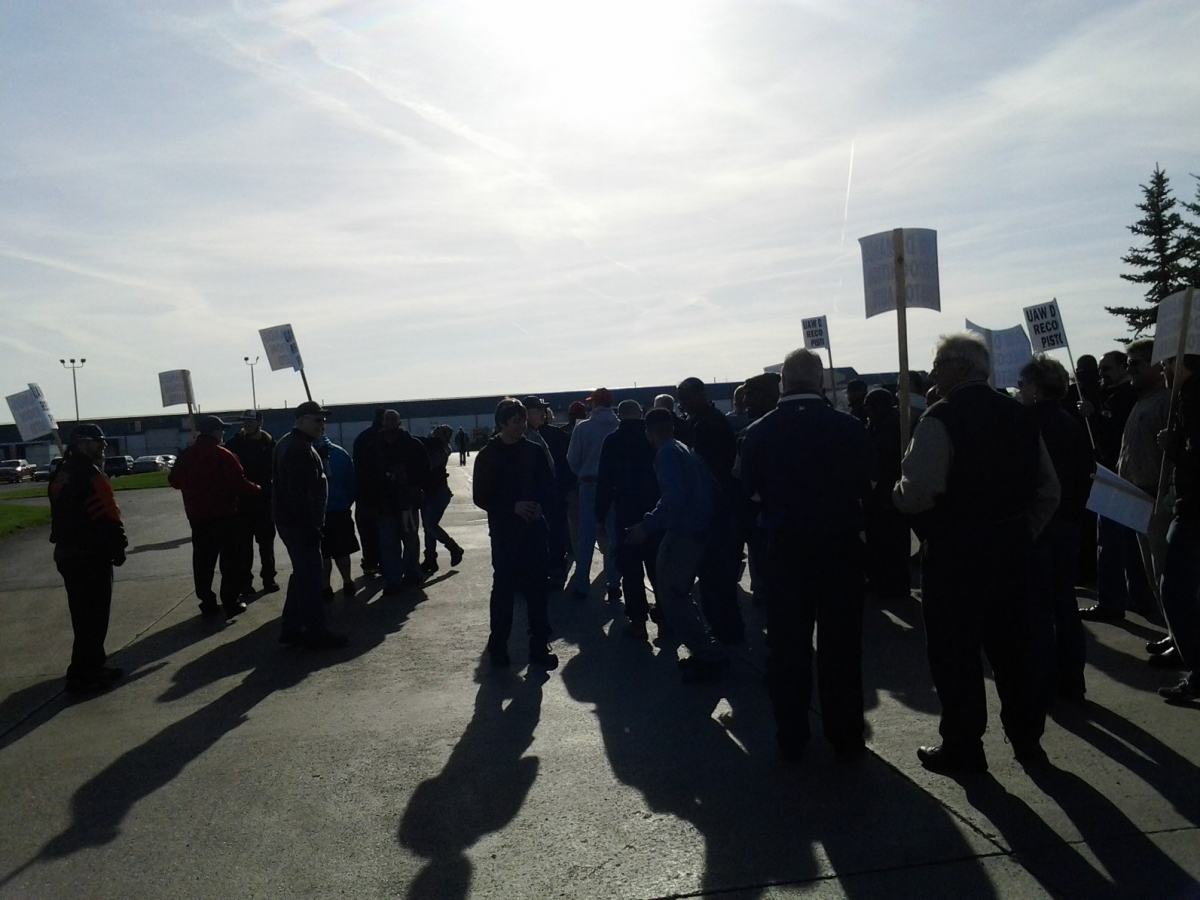 Workers who build brakes and struts for Jeep used the tightness of the "just-in-time" supply system to threaten a shutdown of the profitable vehicle, as they struck for recognition. Photo: Paul Wohlfarth.

This article was updated with new information after management gave in and recognized the UAW at 5 p.m. April 17, and a new sidebar was added about a second group of Toledo auto workers.

Auto parts workers at the Piston Automotive factory in Toledo, Ohio, went on strike for union recognition at 9 a.m. April 17—and by 5 p.m., the boss had given in.

The 70 workers make brake systems and struts for the new Jeep Cherokee, built by Chrysler in a plant across town. Because of Chrysler’s tight “just-in-time” delivery system, their strike could have quickly shut down production of the profitable Cherokee.

Piston workers said 75-80 percent had signed cards asking for representation by the United Auto Workers, but management refused to recognize them.

A union’s typical next step is filing for an election with the National Labor Relations Board—but that gives the boss a chance to drag out the process and put workers through an anti-union wringer. Strikes for recognition, once common, have become rare.

One Step Forward,
One Step Back

Ironically, just as the UAW was organizing one group of Jeep supplier workers, it was walking away from another.

PIC Group workers are on call to work at different Michigan and Ohio auto plants as needed. Keith Sadler said he was paid $9.30 an hour to test-drive Jeep vehicles under a UAW contract. Some workers had been complaining they weren’t getting enough hours.

But as the union was negotiating a new contract, officials decided they didn’t have enough leverage to win any gains—and walked away.

Sadler said the company called a meeting, a few days before a scheduled union meeting, and announced the UAW was no longer representing workers. Managers also announced a 70-cent raise.

“The hard part was you had people who might work at all different places, and you can’t keep track of who’s working where when,” Lortz said.

“Because of the type of work they do, the employer could grab almost anybody. We didn’t have the bargaining leverage. We don’t want to collect dues if we can’t do something for them.”

Sadler said he’d worked 11 hours in the last three weeks, since the union was disbanded. “We were supposed to talk about this in negotiations,” he said, “the company picking and choosing who they were calling.”

UAW Regional Director Ken Lortz said the union informed Chrysler, “as a courtesy,” about the potential for interruption, as “one of their suppliers was not listening to us as closely as we thought they should.”

The parts made at Piston Automotive used to be made in-house at Jeep, Lortz said. But in 2002 the company created a “supplier park” and outsourced a wide array of vital components to suppliers.

The parts were then made by what the auto industry calls a “first-tier supplier,” Dana, which agreed to card-check recognition of the UAW. But last year Jeep decided it wanted the parts cheaper, and non-union Piston underbid.

Striker Trina Lawson said workers approached the UAW when they learned that other supplier plants paid more than the $12.55 made by experienced workers at Piston.

Lawson cited instances of managers’ “picky, childish” intimidation and said workers were sometimes made to work through their breaks or lunches.

Sarina McLaughlin, who torques bolts for the knuckles and puts trailing arms on the rear brake line, said sometimes managers tell workers two minutes before quitting time that they have to stay over—and then dismiss them at 12 minutes after the hour, before extra pay would kick in.

“Cigarettes have tripled, gas has quadrupled,” she added. “Those people up there in the office couldn’t support their family on $12.55 an hour.” She said even temporary workers were on the line.

Lawson said the morning of the strike, the plant manager gave a speech inside the plant, threatening workers with points on their record or loss of holiday pay, and warning them that a walkout would shut Jeep down—and they all walked out anyway.

Shutting Jeep down was the plan, after all. Lortz said workers walked out before the meeting was over, to be met by cheering UAW staff.

Some got phone calls while on the picket line, telling them they’d been terminated. But the strike settlement guaranteed no retaliation.

In 1997 the UAW used a similar strategy to take advantage of the outsize power that “just-in-time” gives to supplier workers. Seat builders at Johnson Controls, a supplier to Ford, stopped production of Ford’s Expedition SUV (profit: $10,000 per vehicle) to pressure for a first contract.

And in 2002 the union shut down Jeep production to force recognition and first contracts at four other Johnson Controls plants.

George Windau, a skilled trades worker at Jeep, said at the time that the strike was “so devastating on production simply because of the ‘just-in-time’ supply philosophy used in the plants, which relies on a steady and continuous flow of these parts from Johnson Controls.”

When Labor Notes noted the power on display by Piston workers, McLaughlin laughed. “I’m loving it,” she said.

Related
Ballots Out in UAW Presidential Run-Off »
2022 in Review: Harsh Conditions, Good Surprises »
Challengers Win Big in UAW Elections; Presidency Headed to Run-Off »
Ballots Are Out in UAW Election, with Contrasting Visions of Unionism Up for Leadership »
Auto Workers Turn a Corner for Strike Pay and Democracy »