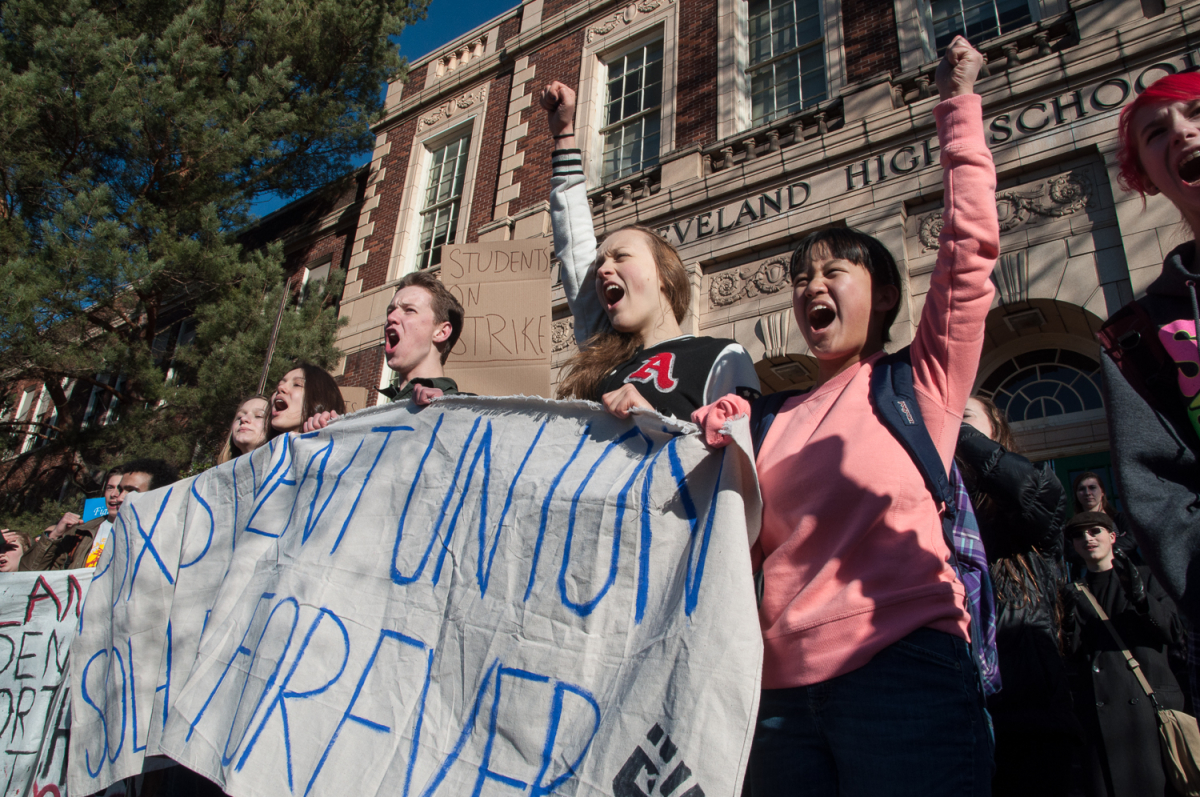 High school students walked out in support of Portland teachers as their strike deadline neared. This week the teachers are voting on a contract deal. The district agreed to add 150 teachers, which could reduce class sizes more than 5 percent. Photo: Bette Lee.

After coming to the brink of what would have been the first strike in their union’s history, Portland, Oregon, teachers are instead voting this week on a contract that reduces workload significantly.

Up till the end, administrators had refused to budge on workload, the teachers’ top priority. But the district agreed to hire 150 teachers for next school year, potentially reducing class sizes by more than 5 percent.

Teachers in St. Paul, Minnesota, reached a settlement the same week, averting their own strike vote over similar issues.

The Portland walkout was set for February 20. With two school days left to go, teachers had cleared out their classrooms. Books, supplies, and decorations were boxed up and put in storage. The district called for a shortened school day February 19, to give administrators time to collect teachers’ computers, keys, and badges.

Over the previous weekend teachers and community members had gathered at locations around the city to make signs, preparing for picketing at every school.

It all worked. In a 23-hour bargaining session, administrators finally agreed to address teacher working conditions. In addition to adding 150 teachers, the deal includes more planning time for elementary and special education teachers. Teachers will get a cost-of-living increase in pay, but agreed to phase out eligibility for early retirement benefits (a stipend and insurance for up to five years).

When this round of talks began last April, teachers had just agreed to forego a half-year’s pay increases to avoid threatened layoffs.

PPS claimed to be in financial crisis—but had recently taken out a lavish contract with union-busting consultant Yvonne Deckard, promising her $15,000 a month to lead its bargaining strategy.

Throughout bargaining, the district dismissed teachers’ demands to reduce workload and add back teachers, calling the teachers’ proposal too expensive. This argument lost credibility in January, when—in a public hearing required by state law—the district revealed a budget surplus estimated to total $29.5 million over two years.

Part of this surplus is the result of cutbacks to the Public Employee Retirement System; the state legislature voted to take away agreed-upon benefits in order to boost education funding. Another part is because the district over-budgeted its per-teacher expenses by 20 percent. This tactic of over-budgeting results in millions of dollars which can then be used for anything the district chooses—like a union-busting consultant.

More money kept surfacing. The state of Oregon announced February 12 that an additional $4.6 million was coming to the district as a result of increased state revenue. Superintendent Smith told the public that the money “allows us to increase our investment in teachers and staff in our schools.”

But until that final marathon bargaining session, the district failed to put into writing any assurance that teacher workload would be reduced, or that wrap-around services and rich curricular offerings would be strengthened.

Although the district went into negotiations last April intent on stripping the contract down to the bare bones, in the end teachers won new language that protects their ability to teach. The agreement prohibits the use of students’ standardized testing data in the transferring, firing, or compensating of teachers, and includes a new article protecting teachers’ academic freedom.

At a packed meeting at union headquarters, bargaining chair Bill Wilson told the room that the bargaining team never would have been able to achieve such a contract without the strike vote and strike preparations.

STRETCHED TO THE BREAKING POINT

The Portland Association of Teachers (PAT) represents about 2,900 teachers, counselors, and school psychologists. After two decades of constant cuts, they had felt stretched to the breaking point.

The district had increased the caseloads of special educators, counselors, and school psychologists, and reduced the number of arts, physical education, library, and other specialists, so that one was often assigned to serve two or more schools.

Class sizes had increased—elementary classrooms were often 30 students or more—and teachers were asked to do more with less support.

“What’s going on in Portland Public Schools has shed light on a bigger problem: that for too long, education has been underfunded by design,” said teacher Adam Sanchez during debate before the near-unanimous strike vote. “It’s time to demand that the money flows into the classroom—not to corporations, not to testing and textbook companies, not to bureaucrats and high-priced consultants.”

While this contract does not fulfill all of the union’s long-term vision for creating the schools that Portland students deserve, teachers hope it represents the beginning of a new commitment to reinvest in the city’s schools.

The district’s stance created a tide of new activists in the union. Leaders from school sites and PAT organizers pooled their efforts to make face-to-face contact with every member.

Schools and weekly school board meetings were regularly flooded with a sea of blue, the color representing PAT solidarity. At nearly every board meeting, teachers testified passionately and articulately about school conditions and what we need to serve our students.

Many teachers who had previously kept to their classrooms found their voices as public advocates for students and for public education. Bargaining committee member Steve Lancaster, for example, had never been active in the union before he was asked last year to join the team. Since then, he has become a very public and powerful voice for teachers at the bargaining table, at union meetings, and in the media.

A citywide group of mostly high school students, the Portland Student Union, emerged as a powerful supporter of the teachers’ fight. Its demands, which dovetail with the teachers’ contract proposals, include smaller class sizes, funding for the arts, more time with counselors, and no school closings.

Students organized acts of solidarity with teachers in every one of the district’s comprehensive high schools the week of the strike vote. At Cleveland High, 600 students—half the student body—walked out. Chanting “If you strike, we’ll strike too!” they marched to and around nearby middle and elementary schools.

When the student union attempted to deliver its demands to the school board January 13, all but one of the elected board members walked out during their presentation.

A network of parent and community supporters also fought alongside PAT. Portland Teachers Solidarity Campaign and Jobs with Justice organized forums, passed around petitions, and canvassed neighbors with information about what was happening. With the strike date approaching, they even organized food distribution centers and childcare, often space donated by union halls and places of worship, to support families who chose not to cross the picket line.

Many of these alliances were forged in early 2013, when the union partnered with community activists to stop the closure of neighborhood schools in the Jefferson Cluster, a historically under-resourced part of town which includes Oregon’s only majority African-American high school.

All along, the union sought to use the contract to improve teaching and learning conditions.

Modeled after the work done by Chicago teachers, “The Schools Portland Students Deserve” was presented as a preamble to PAT’s initial contract proposal. It called for equity of funding and programs across schools; lower class sizes and caseloads; wrap-around services such as counseling and social work; a whole-child curriculum including the arts and physical education; and an end to the misuse of standardized testing.

But the district refused to talk about any of these issues, including class size. It argued that these were “permissive” subjects, meaning that by state law the district was not required to discuss them.

In September, school board member Matt Morton voiced the board’s intention to get “aggressive” with teachers. After the district proposed to gut the contract, nobody with the authority to negotiate participated in a single face-to-face bargaining session with teachers until after the district declared impasse on November 20. As a result, virtually no progress was made during the first six months of official bargaining.

Superintendent Carole Smith finally began to participate in December, resulting in some movement, but not on issues most important to teachers, including workload.

More than 2,800 PAT members—virtually the whole membership—packed a concert hall February 5 for the stand-up strike vote, which passed with an estimated 98 percent. Arriving teachers were cheered on by hundreds of community members rallying outside in the freezing cold, with signs that read “We’ve Got Your Back” and “Support Our Teachers.”

PLANNING FOR A LONG ONE

As community members demanded a resolution, PAT continued to work toward an agreement during the two weeks between the vote and the walkout date.

But district officials instead put their efforts toward planning for a lengthy strike.

The two sides met for mediated bargaining February 11, but nothing in management’s proposal was changed besides the date on the cover sheet.

The district began aggressively recruiting strikebreakers, putting out an ad on Craigslist and guaranteeing five days of pay. It promised parents that all schools serving grades K-8 would be open starting February 25.

Though the district had proposed to reduce professional development time for high school teachers to half a day, it scheduled two days of paid training for its strikebreakers. And it cancelled all after-school activities through the end of February, hinting further at its intent to make this strike a lengthy one.

Management also bullied substitute teachers, who are represented by PAT under a separate contract. The district told the press that subs would lose their place on the list, and risk losing their insurance, if they didn’t work during a strike.

This was in violation of the substitutes’ contract, which specifically states that subs can remove themselves from assignment “during a period of a lawful work stoppage by regular teachers.” The vast majority told the union they would exercise their right not to work during a strike. PAT filed a labor complaint on behalf of subs.

And the district filed a complaint with the state’s public employee labor board, asking the state to block the strike on the grounds that teachers may not legally strike over class size.

At the Labor Notes Conference in Chicago April 4-6 you’ll meet Portland teachers, students, and labor activists who organized solidarity efforts with them. The conference will feature a teachers meeting with participants from around the country. Workshops include winning contract campaigns and labor-community alliances.