How'd Seattle Do It? 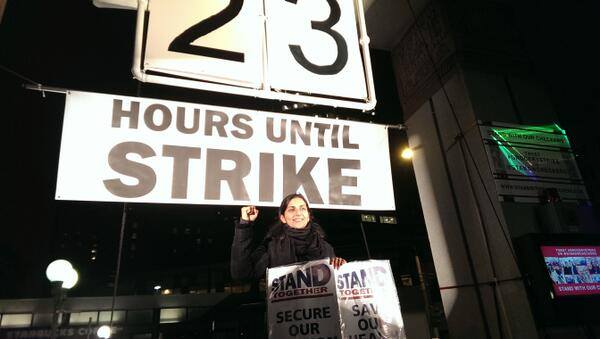 Seattle grocery workers claimed attention with their strike-countdown clock. As they beat concessions, other area workers were winning a $15 wage and electing a socialist to city council. What's in Seattle's water? Photo: Vote Sawant.

Is there something in the water in Seattle?

The area has seen dramatic actions by and on behalf of workers in the past few months: defeat of concessions at major grocery chains, Boeing workers’ big “no” vote on concessions, a $15 minimum wage voted in for airport workers, and election of a socialist to city council—a candidate who made a city $15 minimum the centerpiece of her campaign.

Activists are hoping what’s happened here has implications far beyond the Puget Sound.

“We may be ahead of some areas, but we’re not unique,” predicted Dave Freiboth, head of Seattle’s county labor council. “This kind of change is coming nationally.”

In October, two hours before a regional grocery strike would have jumped off, 30,000 Food and Commercial Workers and Teamsters won a contract that defeated onerous health care concessions, and more, that had been forced on their co-workers in other states.

A few weeks later, Boeing Machinists (IAM) turned down an extortionist demand to freeze pension contributions for current workers, abandon defined-benefit pensions for new hires, and pay new hires $21,000 below current workers. Boeing had demanded an eight-year contract extension to keep work on the 777X airplane in Washington. Despite extraordinary intervention by the IAM International, the 31,000 Boeing workers voted “no” two to one.

Support Boeing Workers with an Email

Washington’s Democratic Governor Jay Inslee, the Congressperson who represents the city of Everett (where Boeing is located), and Everett’s mayor have all publicly called for Machinists Local 751 to bring Boeing’s latest “last/best/final” offer to the membership.

The new proposal no longer contains a two-tier wage, but it still destroys the defined-benefit pension plan.

At recent meetings with Boeing, the only union representative who wanted to bring the proposal to the members for a second vote was from the International union.

Political Director Larry Brown is organizing a boycott of the governor's upcoming holiday party. He believes that, given the skill level of Boeing Machinists, this may be the last stand for maintaining defined-benefit plans for workers.

“We need to raise this to a new level,” Brown said. “This is an epic battle. We need to make this Chapter 2 of Occupy Wall Street. We are going to stand and fight.”

To tell Inslee to stop interfering in the internal affairs of the Machinists and to support a decent standard of living for Washington workers, email his chief of staff, Joby Shimomura, at both jobyshimomura[at]gmail[dot]com and joby.shimomura[at]gov.wa[dot]gov.

Meanwhile in November’s local elections, voters in SeaTac (a small city home to the area’s airport) by a slim 77-vote margin established a $15 minimum for airport-related workers.

And community college teacher and Teachers (AFT) member Kshama Sawant, running as a socialist on a platform of taxing millionaires and a $15 city minimum wage, raised over $100,000 in contributions and a small army of volunteers for a city council election. (Each seat is contested separately—Position 1, Position 2—but races are citywide.)

When the smoke cleared, Sawant had received almost 95,000 votes—defeating the congenial liberal 16-year incumbent by a little over 3,000 votes, and getting almost as many votes as the incumbent mayor. Her red socialist signs and T-shirts were seen all over Seattle.

Lynne Dodson, secretary-treasurer of the Washington State Labor Council, believes these developments reflect a cultural shift in labor. A former co-chair of statewide Jobs with Justice, she says labor is recognizing the need to work with community allies.

Dodson relates this fall’s victories to social movements of past decades, starting with the 1999 Seattle action against the World Trade Organization. The WTO protests forged unusual alliances that remain to this day. Washington’s union density is also the fourth-highest in the nation.

Both credit the Occupy Movement with “changing the conversation”—“a general uprising of young, displaced workers trapped in low-wage jobs,” as Freiboth saw it. “People looked at the wage disparities and saw that, as a simple matter of fact, the system isn’t working.”

“How long were we in labor talking about income inequality, but nobody listened?” said Dodson.

And both think the Tea Party actually, inadvertently helped. Dodson credits the right-wingers for having made socialism seem less alien, particularly to young people, by describing modest reforms like Obamacare as “socialist.”

State Senator Bob Hasegawa, a former Teamster leader who still sits on the state labor council, sees the Machinists’ vote as a reaction to Boeing’s over-reaching at a time when workers were increasingly fed up. He was one of only two state senators to vote against giving Boeing a multi-billion dollar tax break (bribe) to keep work in Washington.

He’s not so sure the string of victories heralds a major change, but maybe so: “People are open to new solutions, because the old solutions sure aren’t working—concession after concession.”

STEWARDS MADE THE DIFFERENCE

Why were grocery workers in the Puget Sound able to hold the line against those concessions when others have given in? Mary Ann Schroeder, a 20-year Safeway worker, credits two steps.

Because of local mergers and a renewed commitment to internal organizing, the number of shop stewards in area stores has increased enormously. In a departure from the past, when many stores had no stewards at all, she said co-workers were kept continuously informed about negotiations.

She also credits community support. In past contract fights, many workers were uncomfortable with actions in front of the store, worrying it would just bring management down on them.

But this year, they got thousands of shoppers to sign cards pledging to boycott if there were a strike. Also important was the union’s great visual: a giant clock at a downtown plaza counting down the hours until the strike deadline.

The planes are hand-built, like a Lamborghini: “The difference is that a jet has about four million parts, and a Lamborghini has about 10,000,” he said. “Boeing would like to have a compliant workforce and a highly skilled workforce—but they only get to have one of the two.”

But Brown stressed that the action also reflects the good work District 751 has done with “intergenerational” education, building solidarity and union consciousness among young workers. The result has been a lot of union pride—and a group of workers who aren’t easily intimidated or bought off.

After the “no” vote, the Washington Labor Council held a rally of about 500 for the Boeing workers in downtown Seattle. Council President Jeff Johnson said, “We gather to say ‘thank you’ to the Machinists for standing up for community standards.”

All this has had a real impact on local politics. During the November election, the mayor made a big issue out of opposing city accommodations for virulently anti-union Whole Foods, arguing no subsidies should go to a corporation seeking to undermine local labor standards.

Some union people knew candidate Sawant from her work in Occupy, which had substantial labor involvement in Seattle. Her vigorous push for $15 brought her endorsements from a half dozen locals, mostly public employees. A large Electrical Workers (IBEW) local and an AFSCME state employees local gave money. Some labor leaders publicly supported her campaign; far more backed her quietly and helped build support within their ranks.

Now that she’s won, labor has largely united behind her and she is a popular speaker at rallies. Tellingly, four of the other eight city council members joined Sawant at a December 5 rally to support the national fast food workers’ strikes and a $15 city minimum wage.

Still, neither Sawant nor the labor movement is willing to sit back and count on the actions of other council members. An ordinance to raise the city’s minimum wage to $15 in 2014 will be introduced when the council reconvenes in January—but at the same time, plans are being made for a citywide referendum.

There’s precedent for that. In 1998 Washington voters established a state minimum that rises automatically with inflation each January 1. The 2013 minimum, $9.19, is the nation’s highest—and will rise to $9.32 for 2014.

Business Manager Dave Westberg of Operating Engineers Local 609, which represents non-teaching K-12 employees, wants to make the Seattle School Board the poster child for the need to raise the minimum wage.

“Locally, there is no greater example of income inequity than Seattle Schools,” Westberg said. “The current entry wage in the nutrition department is $11.67 and for custodians the (apprentice) rate is $11.61.

“Most of these are full-time employees who are forced to live far outside the city and commute or live in public housing in order to work at Seattle Schools.”

Freiboth says the vote in SeaTac and the election of Sawant mean “the political establishment can’t ignore wealth inequality any longer. We have a whole generation of baby boomers with kids in crap jobs without health care, and they’re starting to see the connection between that and a strong labor movement.”

Paul Bigman is on the executive board of the Martin Luther King Jr. County Labor Council.