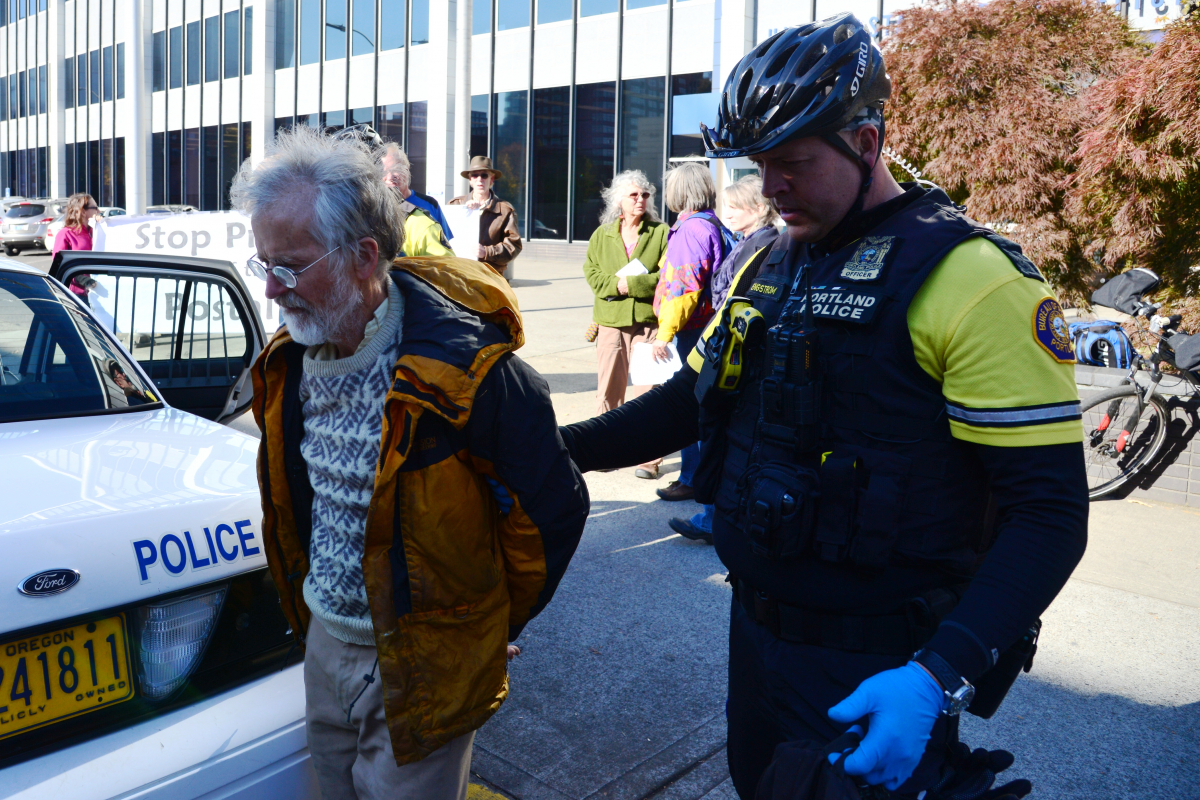 Retired state worker Jack Herbert was among seven activists arrested at Portland, Oregon's main post office Tuesday. The "postal protectors," armed only with more than a thousand petition signatures, were attempting to negotiate a meeting to discuss an end to privatization of postal jobs. For the sixth time since August, they were turned away. Photo: Michael Hastie.

After months of attempts to gain a meeting with senior postal managers, the “protectors” showed up armed with more than a thousand signatures on a petition. Since August senior postal managers have received requests—from postal union local presidents, from Congresspeople, and from community groups—for meetings to discuss an end to privatization of postal jobs. For the sixth time, the activists were refused.

“Postal truckers, mail handlers, and mail processing clerks are losing their jobs to profiteering private corporations,” declared Michael Colvin, a retired teacher and one of those arrested. “We are protesting the privatization of the people’s postal service. We oppose the destruction of family-wage, union jobs and the delay of the people’s mail.”

While waiting peacefully to meet with Brix, four of the petitioners were grabbed, kicked, and thrown to the floor by a postal inspector, causing injury requiring medical attention. The petitioners are considering filing assault charges.

Despite news reports to the contrary, the activists did not attempt to enter a secure area nor threaten any postal property or personnel.

During the assault, the activists called Portland police. Though the police began by attempting to mediate and set up a meeting with Brix, they abruptly cut off talks and arrested seven for trespassing. The arrestees say they will plead not guilty and request a jury trial, facing up to 30 days or a fine of $1,250.

Postal mail handlers and processing clerks in nearby Salem, Oregon, have lost their jobs as their work is subcontracted to the low-wage, non-union Matheson Flight Extender Inc. in Portland.

At the same time, Portland postal truckers are being put on standby while the Dill Star Route/LAPO trucking company takes their work shuttling mail between the three Portland processing plants. Postal truckers in California and elsewhere have won arbitrations against subcontracting, based on a challenge to the alleged cost savings, but recently national USPS management announced its intention to contract out 162 trucking hubs, nearly every one in the country.

“The security, safety, and timely delivery of the mail are all at risk,” said Rev. John Schwiebert, one of the arrestees. “Rural communities, seniors and the disabled, small businesses, and low-income communities are hit the hardest.

“Postal management needs to reverse these closures, cuts, and subcontracts which are sending our beloved postal service into a death spiral.”

Portland Communities and Postal Workers United (PCPWU), organizers of yesterday’s action, have been fighting postal cuts and closures for the past year. In May 2012, 10 activists were arrested occupying Portland’s University Station post office, which has since been closed.

In April, five protesters went to jail for occupying the Salem mail plant, which has now been dismantled and its machines moved to Portland. The same group was arrested in July occupying the Matheson plant and has blockaded Dill Star Route trucks multiple times, demanding those companies stop stealing family-wage, union postal jobs.

PCPWU is part of the national Communities and Postal Workers United group that agitates around the same issues.

Seven postal trucking positions were recently eliminated at the same time that the subcontractor, Dill Star Route, hired 20 drivers. USPS is paying Dill $59 per hour for each driver, while also paying for Dill’s gas, lending the company postal trailers (in violation of postal rules), and leasing nine tractors for Dill Star use (at $30,000 per month).

According to union officials, remaining postal drivers meanwhile are sitting on standby without work, up to 500 hours a week, while many of the extra Dill Star trucks are running empty or carry very little mail.

Mail sorting machines from the closed Salem plant will be placed in space leased from Matheson and worked by Matheson employees. USPS senior plant manager Lisa Shear says the subcontracting is necessary to save labor costs in USPS’s “financial emergency”.

That emergency is phony. Since 2006 the USPS has been forced by Congress to spend nearly 10 percent of its budget pre-funding retiree health benefits 75 years in advance. No other U.S. agency or private business faces such a crushing financial burden. Not only would the Postal Service have been profitable without the mandate, but USPS has also overpaid tens of billions of dollars into two pension funds.

In the past year, the Postmaster General has closed 45 percent of mail processing plants, reduced hours by 25 to 75 percent in a third of the post offices, put 10 percent of post offices up for sale, subcontracted trucking and mail handling, eliminated tens of thousands of family-wage jobs, and delayed mail delivery.

USPS’s own studies (revealed at the March 22, 2012 meeting of the Postal Regulatory Commission) show that big mailers leave the system as a result of such delays, costing more in lost revenue than is saved by lowering labor costs, not to mention the dramatic increase in trucking costs as mail is transported hundreds of extra miles to be sorted in the nearest still-open processing plants.

USPS is a $65 billion annual business, with a surplus of over $100 billion in its pension and retiree health funds, more than 30,000 post offices, and 200,000 vehicles. Postal activists claim that the aim of the Postmaster General and his allies in Congress is to transfer that public wealth to for-profit corporations.

Jamie Partridge, one of those arrested, is a retired letter carrier and an organizer with Communities and Postal Workers United.