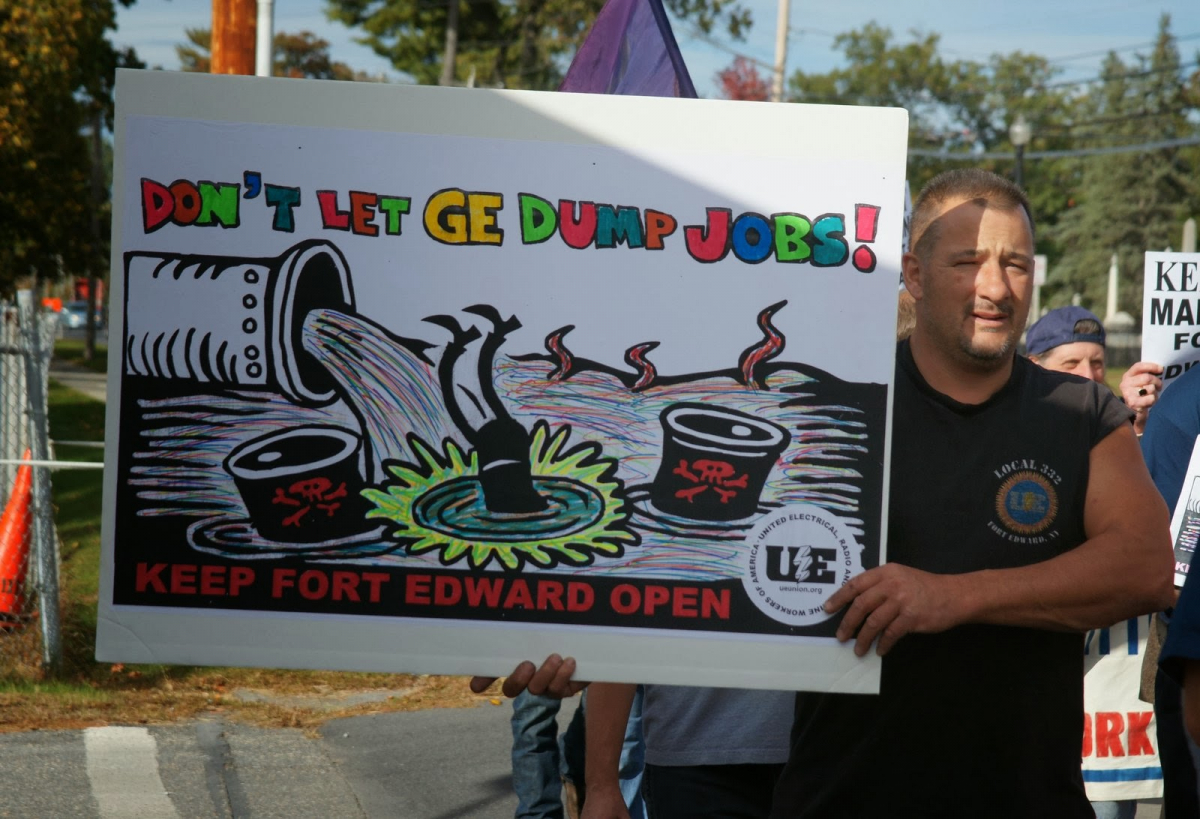 Fort Edward, New York, is located at the “Great Carrying Place,” a portage around the falls on the Hudson River which had been used by Native Americans for thousands of years before the General Electric Co. built a capacitor plant on the shore of the Hudson.

The great river supplied the Mahicans who lived along it with ample fish. It took only a few hundred years for the Europeans and their profit-hungry corporations to make fish from the river inedible. Thanks to GE’s use of PCBs at the Fort Edward plant, long stretches of the Hudson must now be dredged to clean the river.

But the latest casualties of this sad history of corporate pollution and greed are the GE factory workers.

For decades they toiled here, exposed to the toxic PCBs in and under the plant. Represented by the United Electrical Workers (UE), they managed to wrest decent jobs from their giant employer—in the process making their small town a stable and prosperous community.

Now, after GE has spent millions trying to avoid cleaning up its toxic mess, the company proposes to close the Fort Edward plant and dump its 200 employees into the jobless riverbed of early 21st century capitalism.

GE plans to move some of the work to Clearwater, Florida, where the standard non-union wage would be around $12 an hour.

In response to this threatened closing, UE plans an extensive campaign of action and community outreach. “Solidarity Saturdays” send members out to solicit thousands of signatures from the surrounding communities that will be affected by the job loss. UE representatives have fanned out to meet with unions across the region.

At a picket last Thursday at the plant, every AFL-CIO central labor council was represented, despite the fact that UE is an independent union not affiliated with the AFL-CIO.

Gene Elk, secretary of the UE-GE Conference Board, told the assembled workers and supporters that GE’s response to the union’s request for information was to call it “burdensome.” What the union got, Elk said, was “15 sheets of paper... and we had to sign an agreement pledging that we wouldn’t divulge much of that information to the public.”

Why shouldn’t it be “burdensome” for a powerful, profitable corporation like GE to close a plant? I asked UE Political Director Chris Townsend.

“Our members have worked with this company to keep this plant profitable. Now the company decides to walk off, leave hundreds of people stranded with no jobs, no income, and leave this community and this state in possession of the nation’s largest Superfund site.”

I asked a young couple who work in the plant, Kim and Chris, about the local job situation. “Where do you go?” they said.

UE plans more community and labor outreach in the coming weeks, with a big action in Fort Edward on October 18. This is a union and a local that are not going quietly. They deserve all the support they can get.

Jon Flanders is a retired member of Machinists Local 1145 and vice president of the Troy Area Labor Council.

Related
Steward's Corner: How One Union Uses Kitchen Table Economics to Advance Medicare for All »
Here's How to Join Labor's Anti-Coup Network »
Undergrad Workers Organize Wall-to-Wall at Kenyon College »
New UE Pamphlet Highlights Rank-and-File Control, Calls for Return to 'Them and Us Unionism' »
With a Little Help from My Friends: How Taco Bell Workers and Many More Are Self-Organizing in the Pandemic »