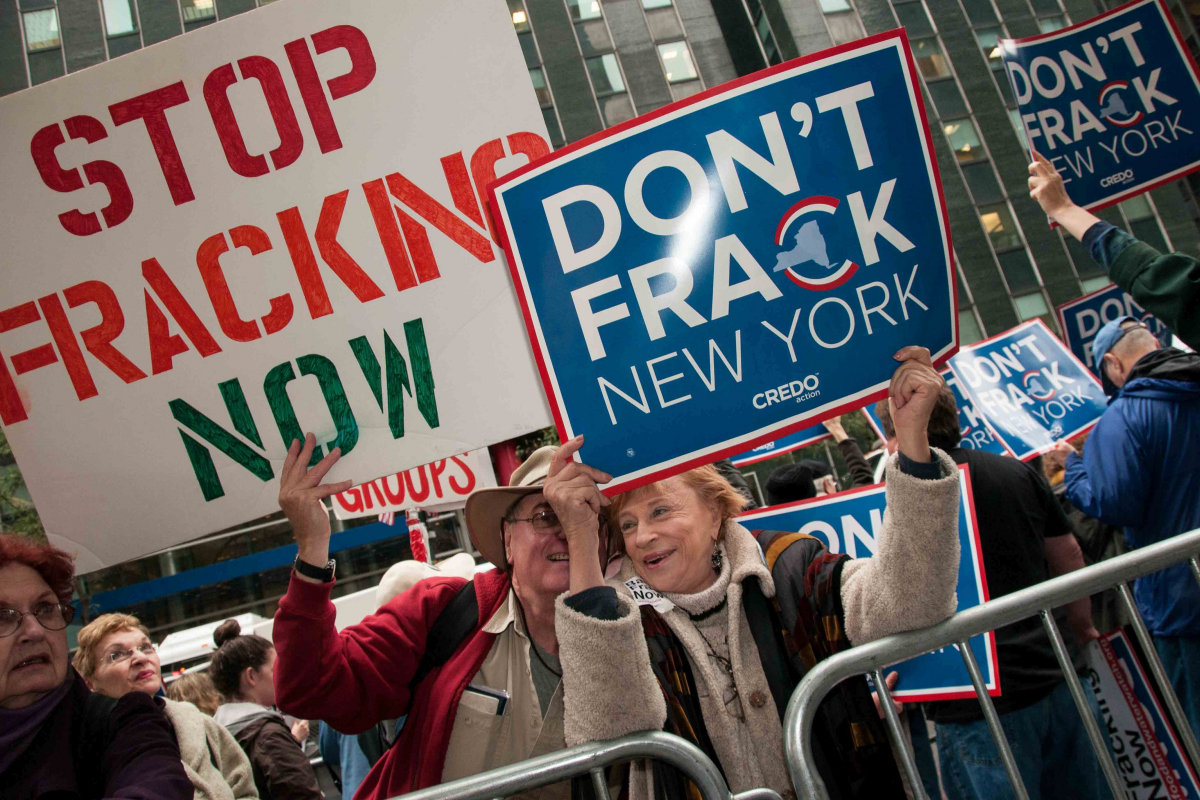 New Yorkers protested fracking of oil and natural gas, where rock is fractured by the injection of water and toxic chemicals under enormous pressure. Fracking workers, overwhelmingly temporary and non-union, are constantly exposed to toxins. Photo: Adam Welz, Credo Action.

Fracking is promoted by everyone from the CEO of Exxon to President Obama as the solution to climate change, economic growth, jobs, and energy independence.

But a closer look at the facts suggests fracking is another Ponzi scheme. Booms always result in busts…and somehow, those who do best in the boom, like big banks, never get busted as badly as the workers who believed their promises.

The fracking boom is subsidized with tax-dollar giveaways to some of the world’s biggest companies, like Exxon and Shell. Its impact on the public’s health led Pennsylvania nurses to take a stand.

The term “fracking” comes from fracturing—fracturing rock. To extract oil or natural gas, the rock, usually shale, is literally fractured by the injection of millions of gallons of water and toxic chemicals under enormous pressure.

Up to 12,000 horsepower worth of diesel engines (think three locomotives) force the liquid down a well with enough pressure to create thousands of cracks in solid rock radiating from the well bore, up to a mile and a half from the site of the well. Gas or oil, released by the impact, flows through the fractures and up the well.

Some of the water comes back up with the gas or oil, but most remains underground—at times carrying toxins along the fractures, or failures in the well casing, into drinking water aquifers. The fluid that comes back up contains all the toxins it went down with, and brings up additional harmful chemicals including radium, radon, and arsenic.

This waste fluid has been banned from most sewage treatment plants, which are not capable of detoxifying it. Fracking companies dispose of it by evaporating it, or at times by intentionally spilling it onto roads.

Fracking has come into use only in the last several years—because the reserves of oil and gas which can be pumped with less dangerous, less expensive technologies are so depleted. That’s why fracking is now economically viable. It won’t lower the cost of gas or oil.

Fracked wells have a very short lifetime: individual wells are productive for only a few years, and entire fields for only several years. Compare this with conventional oil fields in Texas, which are still pumping, although more slowly, after 100 years.

Fracking provides almost no permanent jobs. The industry moves in with drill crews of mostly semi-skilled workers, hundreds of trucks, and noisy, smoky heavy equipment for a few years—then moves on.

These non-union crews, mostly young men, follow the work from state to state. Often they are housed in trailers by the drilling companies: portable company towns. While hundreds of workers may be involved in the welling and fracking process and pipeline construction, long-term jobs monitoring completed wells are in single digits for an entire county.

Local resources for housing, health care, and public safety are strained to the limit. Roads are pounded to gravel by the heavy trucks. The engines have no sound dampening equipment at all, and they go 24 hours a day.

Increased traffic accidents, emergency room visits, drunk driving, and prostitution are documented accompaniments of the drilling crews. Even if the oil company tries to win public support by building a new school or a firehouse, the cost of maintaining infrastructure far exceeds revenue.

These operations are exempt from most clean air and water laws, thanks to a federal loophole engineered by former Vice President Dick Cheney. They leave ground water depleted or permanently polluted, though this damage may not be visible for years.

In Pennsylvania, thousands of acres of agricultural and forest land have been cleared—for well pads, access roads, and pipelines—and then poisoned. The forestry, agriculture, and tourism industries will take many decades to recover from the short-term boom.

The “boom and bust” economic cycle of resource extraction is an old and familiar one. See ShaleBubble and FrackImpact for devastating analyses of the short- and long-term economic impacts of fracking. Wages in rural drilling counties remain below average, and permanent population may even drop.

The diseases documented in fracking areas include respiratory and neurological disorders that will last for generations. Emphysema, asthma, skin rashes, neurological degeneration, and many types of cancer are all documented “downwind” of fracking, along with kills of domestic livestock and wild animals after drinking contaminated water.

While some landowners have indeed received large royalties from the gas and oil companies who have leased their land for drilling, others have found their homes uninhabitable and unsellable, preventing them from moving away from the disaster. Meanwhile, the gas and oil men move on to the next area to plunder.

The anti-fracking movement has many websites with more information, including how to get involved if you live in a fracking region.

The public health hazards are what led the Pennsylvania Association of Staff Nurses and Allied Professionals to call on legislators for a moratorium on fracking and to participate in many rallies and public actions against it. In conjunction with the Massachusetts Nurses Association, we developed a continuing education program about the health risks of fracking, which nurses can take for credit toward renewal of their licenses.

We have also spoken out on Pennsylvania’s gag rule, a law which prohibits medical providers from disclosing to individuals the poisons they have been exposed to by fracking. In order to get information from a company as to the chemicals used, to aid diagnosis, the medical provider must sign a “confidentiality” agreement not to share that information with the patient.

The motivation for this law is quite simple: to discourage people from understanding the connection between fracking and their illnesses.

Gas companies routinely pay families for acute illnesses or incidents of well poisoning—provided they agree to a complete gag order, so they can’t warn others of the risks. It’s a devil’s deal that many poor families, who can’t afford medical care or a new house, find almost impossible to refuse.

Workers in the industry, overwhelmingly non-union, are constantly exposed to toxins—but the temporary nature of their work makes it unlikely they will be able to trace future illnesses back to particular employers. And the insulated nature of their work—they are expected to get any needed medical treatment only from company doctors—allows the industry to keep them under the radar of health and safety regulators.

Gas and oil from fracking are not cleaner than coal. They just pollute differently.

Natural gas is methane. Methane is much more potent as a greenhouse gas than carbon dioxide. Substantial quantities are released into the atmosphere during fracking operations.

Serious scientific analysis has shown that, in the life cycle use of fracked gas vs. coal, the net impact is about the same. The risk to our water supplies from fracking may be even worse than acid drainage from coal mines.

This ruthless pursuit of more fossil fuels now, regardless of the cost to our future, is the essence of corporate immorality and greed.

If we agree that our future depends on the quality of our lives, not on the quantity of gas we can burn—and if we are interested only in economic activity that enriches our lives, rather than depleting our resources—then we will take a stand against fracking.

Jerry Silberman is senior staff representative at the Pennsylvania Association of Staff Nurses and Allied Professionals.