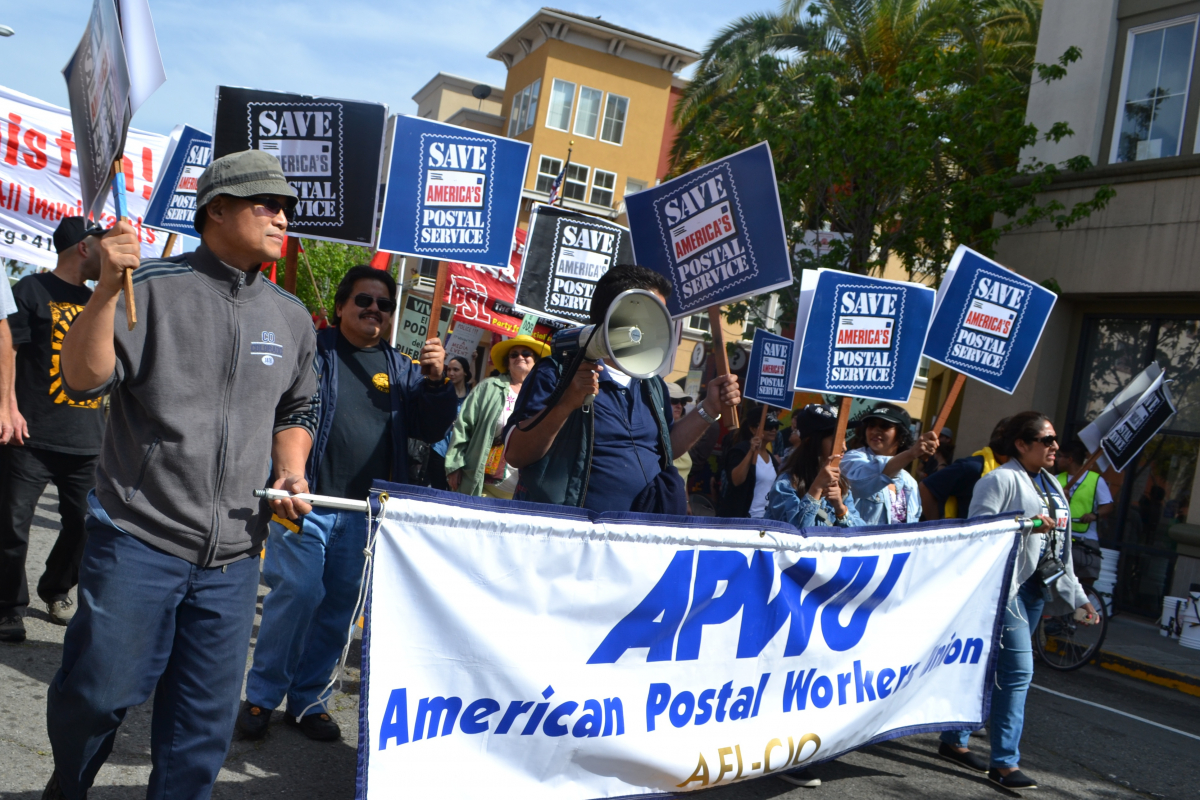 A tide of member discontent swept the Members First slate to victory in the 196,000-member American Postal Workers Union October 8. Seven of the slate’s nine candidates unseated incumbents—reflecting dissatisfaction with the 2010 national agreement and the union’s inadequate response to mail plant closings and other assaults on postal jobs.

One member posted his reaction online: “From the day that piece of crap contract was ratified, I have been hoping for this day to come.”

The first step for the new administration, which takes office November 7, will likely be mending fences with the other large postal union, the Letter Carriers (NALC).

Both joined with two smaller postal unions for joint rallies in 2011 pressing Congress to undo the economic woes it had created for the post office. But when NALC held a Day of Action this past March on saving Saturday mail delivery, APWU sat it out.

Local APWU activists participated, but the national union’s failure to publish even a token endorsement (as the other unions belatedly did) was an embarrassing display of disunity at a time when both Congress and the Postmaster General have been generating attacks on all postal crafts.

Postal unions have never faced bigger challenges. The biggest is resisting proposed cuts to jobs and services in the face of a steady drumbeat of propaganda—from the Postmaster General and others who want to downsize and privatize USPS practically out of existence—about “postal losses in the billions.”

The financial woes are an accounting fiction, created by a 2006 congressional mandate that requires USPS to pump $5 billion-plus annually into the federal treasury to prefund retiree medical benefits 75 years in advance. In its operations USPS is actually turning a profit, $182 million in the first 11 months of fiscal year 2013.

But the paper losses create a convenient rationale for closing mail processing plants, cutting jobs, and reducing standards for on-time delivery. Postal unions have lobbied unsuccessfully to get Congress to undo the mandate—a task made harder by the misinformation about postal finances that dominates mainstream reporting.

The Members First Team brings a sorely needed activist orientation to the APWU. The prior administration relied on lobbying and TV ads, and praised local actions without successfully leading them.

Dimondstein had been lead organizer for the union’s private sector organizing, an effort to unionize subcontracted trucking and private mail-sorting firms that was mandated by delegates at APWU conventions. That effort was shelved by the incumbents. Dimondstein also co-founded the Greensboro, North Carolina, Jobs with Justice chapter and helped initiate a local coalition, Postal Customers and Workers United to Save the Postal Service.

Two of the new officers were part of a 2012 hunger strike to save the post office, started by the grassroots network Communities and Postal Workers United (CPWU). Several have experienced firsthand the effects of plant shutdowns in their own locals. What they had in common was frustration with the national union’s failure to stem the attacks on postal jobs.

RANK AND FILE IS KEY

Organizing the rank and file is the key to what the new administration could bring to the APWU. National officers had expressed frustration with members’ “apathy,” but were also reluctant to call rallies that could get more members involved.

Restoring a culture of mobilization after years of inattention normally takes time—but a planned shutdown of dozens of mail processing plants looms in February 2014. Such a move would end overnight delivery of first-class mail, eliminate thousands of jobs, and displace thousands of workers.

The Postal Service also plans to subcontract postal trucking nationwide, 7,000 drivers’ jobs. In California, CPWU activists and local APWU officers have organized anti-privatization actions, including a sit-in at the office of Rep. Darrell Issa, standard-bearer for the Congressional attack on postal unions.

An important part of the Members First platform was ending divisive three-tier wage structures. The 2010 agreement vastly expanded the non-career workforce. It brought some improvements over the previous “casual” category, but even when non-career employees attain career status, they face a lower ceiling on the pay scale and higher costs for health insurance.

The new leaders have pledged to do better in the 2015 contract.

One selling point of the 2010 contract was the return of craft work, such as subcontracted custodial and trucking jobs, and clerk work in small post offices. That promise has mostly been unfulfilled, as the Postal Service has dragged its feet or even reneged.

Arbitrations and hearings already under way will decide some of the issues, but raising privatization as a public issue should be part of a long-term strategy to defend postal jobs.

The new leaders will face heightened expectations—but they bring an expanded vision, too.

David Yao is vice president of the Greater Seattle Area Local, APWU, and a member of the Labor Notes Policy Committee.