Voters to Decide Limits On Patients per Nurse 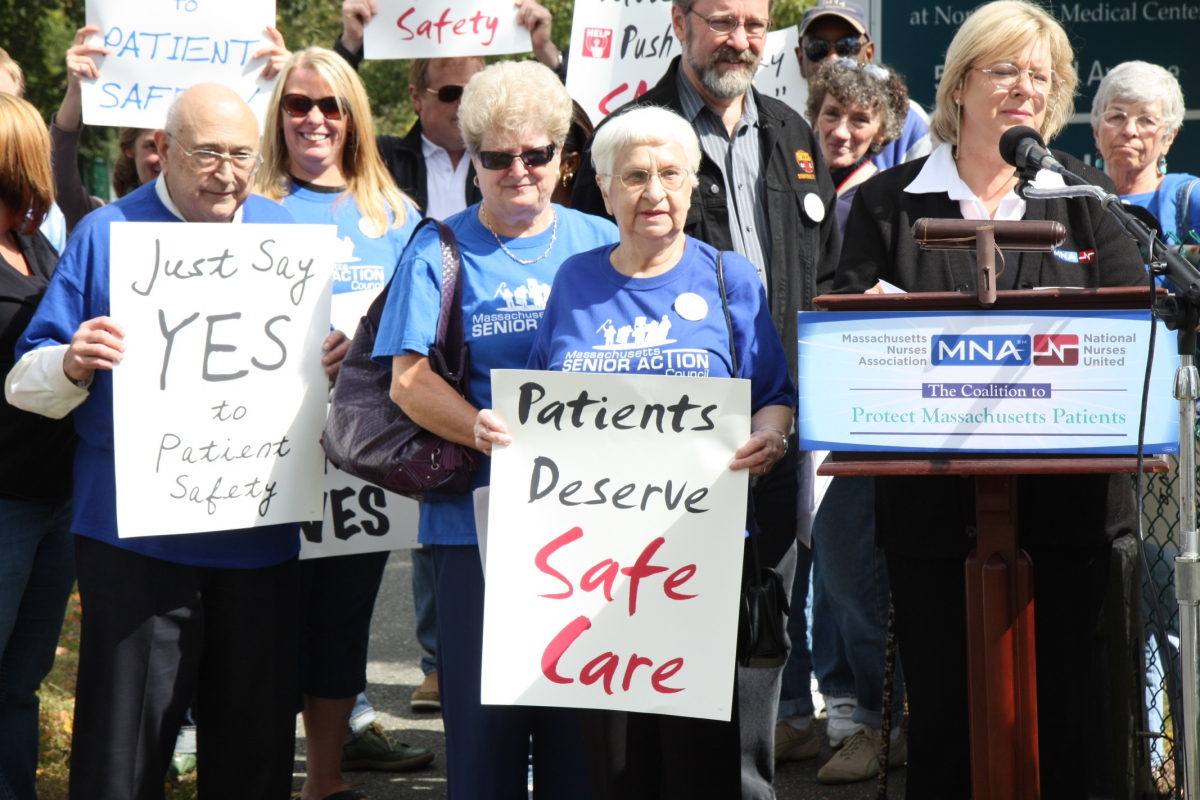 Up to 98,000 patients die unnecessarily in U.S. hospitals every year, 2,000 of them in Massachusetts. Bay State nurses have launched a campaign to end this travesty once and for all through a November 2014 statewide ballot question that would put safe limits on nurses’ patient assignments.

Falls, infections, medical and surgical errors—all result from the transformation of health care into an assembly line. Dozens of scientific studies in the last decade have shown how many preventable deaths are attributable to one simple fact: patients are forced to share their nurse with too many other patients.

California nurses convinced their legislature in 1999 to mandate that hospitals hire enough nurses to create safe RN-to-patient ratios, and battled on to full implementation in 2004.

So now MNA members are sidestepping the legislature—where hospital companies wield so much power—and taking the question straight to the people.

Cutbacks in services, supplies, and personnel make speed-up the order of the day in hospitals—and tragedies all too common. State and federal attempts at “health care reform” on a corporate-based, marketplace model have only made the problem worse.

“Laboring mothers in our high-risk tertiary center are not receiving the focused attention they need from their nurse,” Starbard said. “This puts mothers and babies in further jeopardy.”

Kathy Logan, a veteran intravenous-therapy nurse, put it this way: “No one should have to wait for pain medication, treatments, timely chemotherapy, and be subject to the threat of a mistake because their nurse has too many patients to care for.”

Starbard and Logan were among 2,000 nurses who voted to strike last May for safer staffing levels. Strikes and threats of strikes by thousands of Massachusetts nurses have secured contractual limits in some units, in some facilities—but patients deserve safe care, no matter where they find themselves.

Under the ballot initiative, patient limits for nurses would be established for different types of units and departments: one nurse for four patients in medical/surgical units, one to three patients in emergency departments, and one to two in critical care units.

To account for patients who require more care, the bill would establish an “acuity” system, a standardized formula for measuring how sick patients are. Assignments would be reduced if patients required more intensive care. Right now, there is no law or regulation in Massachusetts that requires hospitals to adjust RN staffing based on patients’ needs.

Getting the measure on the November 2014 ballot will require collecting about 70,000 voter signatures over two months this fall.

With its 86 bargaining units and more than 23,000 members statewide, the nurses union is ideally situated to bring this solution home to the voters. Members will gather signatures in their neighborhoods, among family and friends.

MNA is also reaching out to unions, seniors’ organizations, churches, and health advocacy groups to pitch in to overcome fierce opposition from hospital companies.

The legislature dropped a safe staffing bill in July 2008, when it was on the cusp of victory in the Senate. The Massachusetts Hospital Association pledged $21 million to help close the state’s Romneycare budget deficit on condition that the bill be killed.

Nurses and their allies will not let that happen again.

An enforceable staffing standard has become the overarching goal of union nurses around the world. The nurses of Australia’s state of Victoria won ratios in their public hospital system in 2000. In the U.S., National Nurses United is proposing federal legislation, and nurses in a dozen states and D.C. are pushing their legislatures.

Eyes are now on Massachusetts to see how the ballot strategy will work, and pledges of support are rolling in.

Sandy Eaton recently retired as a staff nurse. He is on the board of the Massachusetts Nurses Association.