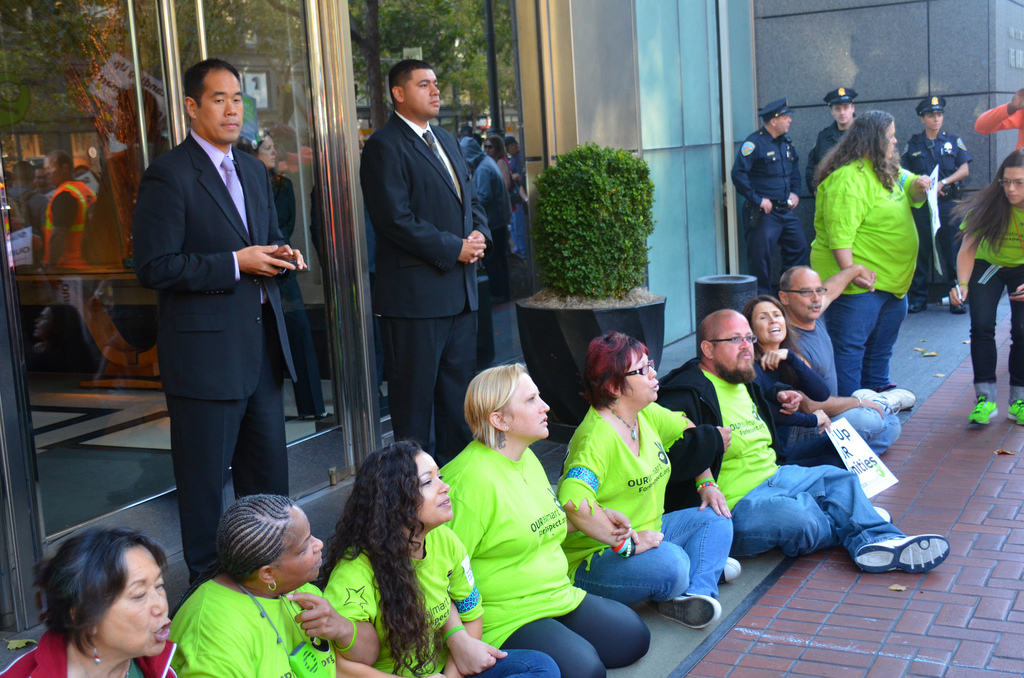 They didn’t strike this time—but Walmart workers and their allies marched, rallied, danced, blew horns, and took arrests in a coordinated day of action in 15 cities yesterday. They were protesting the company’s recent crackdown on worker activists.

Walmart fired 20 members of the Organization United for Respect at Walmart (OUR Walmart)—and disciplined 50 others—for taking part in a week-long strike in June. The company claimed the workers were “no-call, no-shows,” though they made it clear they were striking. “We don’t recognize strikers,” one supervisor told a fired employee in Baker, Louisiana.

Thousands of people participated in Thursday’s protests, according to OUR Walmart, and 100 were arrested—including in Dallas, Chicago, Seattle, Maryland, Orlando, Los Angeles, and New York.

The firings and disciplines were clearly aimed at putting a chill on worker organizing. The big question is, will it work? When Marc Bowers was fired at a Dallas store, he forecast that the move would affect his co-workers in two ways: “It’ll rev it up a little more. Half will be more mad, and half will be more fearful.”

Despite the company’s scare tactics, actions across the country had a tenor of lively defiance.

In San Francisco, protesters took the fight to Walmart board member Marissa Mayer for the second time this summer. To keep the firings in the public eye, OUR Walmart has been targeting key company board members, asking them to intervene against the retaliation. Gordon Mar reports:

Three hundred workers and allies turned out for a boisterous march and rally outside the Four Seasons Hotel in downtown San Francisco—where Walmart board member and Yahoo CEO Marissa Mayer has her penthouse apartment.

“Our jobs should not be at risk when we speak out about improvements that would help our families and Walmart customers,” said Pam Davis, a fired striker from the Richmond, California Walmart store.

Davis was arrested with four other Walmart workers and six community supporters for blocking the entrance to the high-end hotel and condominium complex.

Last year Walmart made $16 billion in profit. The majority owners of the company, the Waltons, are the richest family in the world. Yet many Walmart workers continue to earn poverty wages of an average $8.81 an hour.

The L.A. demo featured breakdancing. Meanwhile in St. Paul, Minnesota, a band of union musicians—performers in the local orchestra, which is locked out—played for a crowd of 50 workers and allies. “It was the most skilled music I’ve ever heard at a demonstration!” reported Joshua DeVries.

An arrest in Maryland. Photo: OUR Walmart. See more in our PHOTO GALLERY.

And in a delightful video of the action in Raleigh, North Carolina, something surprising happens after workers and community allies solemnly present store managers with a huge binder containing 170,000 signatures—the petition to reinstate the fired and disciplined workers.

As the managers give their canned response (they can’t accept the binder, they’ll talk with “associates” but non-employees have to leave), shouts begin to echo through the store. A flash mob in yellow “UFCW Local 1208 Steppin’ 4 Justice” bursts forth to perform an energetic synchronized routine.

OUR Walmart formed in 2011 with the support of the United Food and Commercial Workers (UFCW). Its goals are $13 an hour, adequate hours, respect on the job, affordable health care, and a way to redress grievances.

As Jenny Brown reported earlier this year, the group has drawn national enthusiasm for taking on the retail giant, long considered unorganizable, with a “strike-first” strategy:

“The labor movement is all about results,” says Dan Schlademan, who directs the Making Change at Walmart project of the Food and Commercial Workers (UFCW). “The results are creating the energy.”

Walmart is a particularly rich target because the company is so large that it sets wages and prices among suppliers and competitors.

What’s the strategy behind the latest surprising wave of activism?

Like most new organizing in the private sector, decades of attempts to unionize Walmart stores in the U.S. and Canada have been met with firings, outsourcing, and even closings.

So retail workers who staff the stores, warehouse workers who move Walmart’s goods, and even guest workers who peel crawfish for a supplier are ignoring the path laid out by U.S. labor law, in which workers sign a petition asking to vote on a union.

Instead, they’re exercising their rights to redress grievances together, whether a majority can be rallied to support the effort or not.

One-day strikes in dozens of stores last October and November protested illegal retaliation against those who had spoken up at their workplaces and joined the Organization United for Respect at Walmart. Several had been fired and many experienced threats and cuts in hours for their participation.

“We have a way to respond to illegal actions,” Schlademan said: “the power of the strike.”

The week-long strike in June, paired with a caravan to the company’s shareholder meeting in Bentonville, Arkansas, was OUR Walmart’s most ambitious action yet.

Organizers have described the group as “open source,” meaning that workers can stumble upon it, talk to existing activists, and then organize themselves. By early this year, it boasted thousands of members in 43 states:

Members pay dues of $5 a month. UFCW has put in considerable resources and is “in it for the long haul,” said Schlademan.

Walmart managers are spreading the word, too. As Black Friday protests approached, workers around the country reported meetings warning them not to participate.

There is a spontaneous quality to the group. OUR Walmart’s Facebook page bustles with discussions of goings-on at the stores. Workers compare their quarterly profit-sharing bonuses (measly), tell stories about crazy managers (one in Alabama recently held a 30-minute meeting in the freezer to punish staff), compare their hours (dropping since Christmas), and write in to ask for help.

The going has clearly gotten tougher since then. But the union isn’t about to walk away: the stakes are too high. As Jenny Brown reported last month:

UFCW is doubling down despite the company’s reaction. Convention delegates voted to raise dues in August to pay for new organizing, which includes the Walmart effort.

The grocery workers who make up the bulk of UFCW’s membership have been battered; their employers threaten they’ll go out of business if they can’t compete with Walmart’s low labor costs.

Walmart sells more groceries in the U.S. than any other retailer.

UFCW also rejoined the AFL-CIO, after having left to join the rival Change to Win federation with the Service Employees in 2005. Both the dues increase and rejoining the larger federation bode well for resources for the Walmart effort, staffers said.

And, despite the pressure from their boss, OUR Walmart’s boldest activists don’t seem likely to slink back into the shadows anytime soon, either. As Bowers put it: “I got tired of being scared.”

Gordon Mar in San Francisco, Joshua DeVries in St. Paul, and Slobodan Dimitrov in Los Angeles contributed reporting and photographs to this article. For more on the Walmart firings, see Jenny Brown’s August 20 story, “Retaliation Is Illegal, But Walmart Doesn’t Care.” See more pictures from the September 5 protests in our PHOTO GALLERY.

Alexandra Bradbury is the editor of Labor Notes.al@labornotes.org
Related
Peak Season for Action at Amazon »
Walmart NLRB Decision Doesn’t Change Intermittent Strike Rules »
Comics Against the 1%: Silent Night »
'Superstore' Is the Realest Retail Sitcom Yet »
No Thanks for Poverty Wages, Workers Tell Walmart and Wendy's »