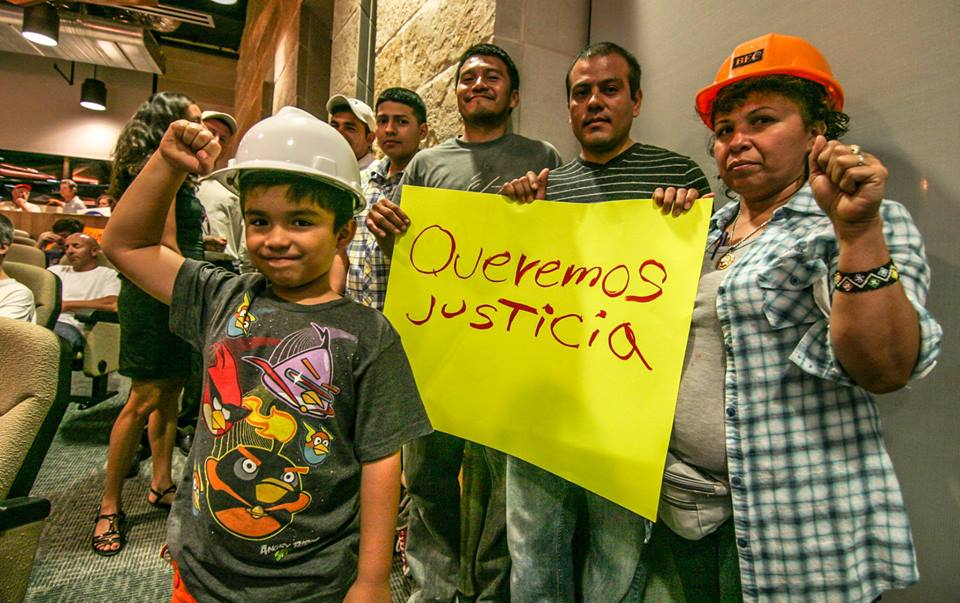 Wrongly classifying workers as independent contractors gets around laws like workers' compensation and family and medical leave. It's costing Texas construction workers millions, according to the International Brotherhood of Electrical Workers Local 520 in Austin. Photo: Workers Defense Project.

Misclassification of employees as independent contractors is a serious problem in the Texas construction industry—so serious that my local decided to do an undercover investigation, using covert workers to infiltrate job sites.

The conditions they found were severe.

“The workers sometimes wouldn’t even get paid that week. They were scared to report the violations to anyone. They feared their boss and the government due to deportation,” said Philip Lawhon, assistant business manager/organizer for Electrical Workers (IBEW) Local 520.

“One of our members said that it reminded him of working in Mexico. He said, ‘I came to America to get away from these types of issues.’”

More than 40 percent of construction employees are misclassified as independent contractors, according to the Build a Better Texas report, released earlier this year by the Workers Defense Project.

And it’s a problem for all Texas residents, as cities and the state lose out on tax revenue, and social safety nets—already stretched thin—are forced to help out the cheated workers.

As business manager of Local 520, I instructed my organizing department to investigate these illegal employment practices and to act on their findings.

Twelve high-rise projects, 17 to 50 stories, in and around downtown Austin are in some stage of construction, from planning to near completion. My organizers found that, of the eight that have started construction, six are using electrical contractors that misclassify their employees as independent contractors.

Four of them are using the same contractor, Power Design Inc., from Florida. Managers at Power Design, we found, had attempted to insulate themselves from charges of payroll fraud by subcontracting out most of the labor to still other contractors, ESP Electric and ES&R, both owned by brothers Rigar and Alex Espinosa.

What Is an Employee?

According to the Internal Revenue Service (IRS), whether someone is an employee or an independent contractor depends on the degree of control the person has over the work.

Three categories of evidence are used to determine the degree of control and independence:

Behavioral: Does the company control, or have the right to control, what the worker does and how the worker does his or her job? Is the worker told when and where to do the work, what tools or equipment to use, where to buy supplies and services, what order to follow when doing the work? Does the worker get more detailed instructions or less detailed? The type of evaluation system also helps determine behavioral control: an employee would be evaluated on how the work is performed, while an independent contractor might only be evaluated on the end product.

Financial: Are the business aspects of the worker’s job controlled by the payer? (These include things like how the worker is paid, whether expenses are reimbursed, who provides tools/supplies, etc.) What level of investment has the worker made in the necessary tools of the trade? Does the worker incur substantial unreimbursed expenses? Does the worker have opportunity for profit or loss? What is the method of compensation? Someone paid an hourly wage is usually an employee.

Type of Relationship: Are there written contracts or employee type benefits (i.e., pension plan, insurance, vacation pay, etc.)? Will the relationship continue, and is the work performed a key aspect of the business?

The IRS provides Form SS-8 to help employers and workers determine who is an employee and who is an independent contractor.

We got three of our members hired on with these two companies during the summer of 2012, all of them Mexican citizens fluent in Spanish.

These members found that “90 percent of the installers were undocumented immigrant workers,” Lawhon said. “These workers’ skills were very limited. The workers were trained to do basically one task and that was predominantly all they did.”

How Workers Are Abused

Independent contractors are sometimes called “1099ers,” because of the IRS tax form 1099 that employers must give them at the end of the year, rather than the W-2 required for employees.

These workers are mostly unprotected by labor and employment law. They are not covered by minimum-wage and overtime requirements under the Fair Labor Standards Act.

They are not entitled to the protection from discrimination based on race, color, religion, sex, or national origin afforded by Title VII of the Civil Rights Act of 1964. The Age Discrimination in Employment Act does not protect them, nor do the Americans with Disabilities Act, the Family and Medical Leave Act, or the National Labor Relations Act.

The Build a Better Texas survey of five cities found that 81 percent of Texas construction workers are Latino, and that 73 percent are foreign-born—making them especially ripe for abuse because of their lack of knowledge of U.S. labor and tax laws. The fact that many are undocumented means they are less likely to report abuses.

As far as we can tell, ESP and ES&R exist only to provide manpower to other unscrupulous electrical contractors. We can find no records of either company contracting with any general contractors or pulling any electrical construction permits.

ESP and ES&R both pay their workers as independent contractors, anywhere from $8 to $14 an hour, with no deductions, no unemployment, no workers' comp, and no overtime pay.

Workers are hired by word of mouth and paid by check. Many frankly prefer being paid under the table—but they get upset at the working conditions and getting shorted on their pay, getting paid late, or not getting paid at all.

The workers did not even receive 1099 forms at the end of the year.

A fair marketplace for labor assumes that all employers follow the law. Honest contractors are at a disadvantage when competing with those who misclassify their workers.

Companies that operate illegally by not paying payroll taxes, unemployment insurance taxes, and overtime compensation are able to underbid legitimate contractors by 15 to 25 percent, according to Michael White, Vice President for Government Affairs for the Texas Contractors Association.

Responsible businesses are also burdened by increased unemployment insurance tax rates, caused by the recession, when others fail to make their required payments.

Misclassified employees, cheated out of pay, also have less money to purchase goods and services, so the state loses out on sales tax revenue—creating another burden on an already cash-strapped state. Texas has no income tax.

Lost unemployment taxes due to this kind of payroll fraud total around $54.5 million a year—meaning that much less money for unemployment benefits for those who need them.

And workers misclassified as independent contractors get neither health insurance nor worker’s comp. When they are injured on the job, or when they or a family member are sick, they must rely on the charity of public hospitals, driving up the costs of health care for all.

After gathering information for several weeks, in November last year Local 520 filed complaints on behalf of the workers with the U.S. Department of Labor Wage & Hour Division, the Texas Workforce Commission (for failure to pay unemployment taxes), and the IRS.

The wheels of justice move incredibly slowly and quietly in these cases, and as a third party complainant, Local 520 gets very little information on their progress.

We have heard nothing from the IRS.

The most encouraging correspondence has come from the Department of Labor. A representative called Local 520 in May and said that, since ESP and ES&R had kept such poor records, the DOL was expanding the complaint to include Power Design Inc. The DOL was opening an investigation into 147 Power Design projects all along the South from Texas to Florida.

While Texas has long been a business-friendly state, with elected officials loath to restrict enterprise, legitimate businesses have recently made a push to pass stiffer penalties for misclassifying employees as independent contractors.

Bills introduced in the Texas House of Representatives and Senate would increase the penalties for payroll fraud. Many legitimate subcontractors support such laws—though one group very much against stopping payroll fraud is the Homebuilders Association.

The ordinance requires that electricians working as “independent contractors” have a Texas electrical contractor’s license.

Most of the workers being exploited have only an electrical apprentice license, which just requires paying a small fee to the state licensing department. The contractor’s license is, of course, much more difficult to obtain, with electrical experience and knowledge requirements involved.

The only way to stop the illegal practices of unscrupulous construction contractors is for organized labor and legitimate business owners to join forces, to work toward stiffer penalties and enforcement and to demand that the government entities charged with enforcing existing labor law do their jobs.