AFL-CIO: No Solidarity Charters for ILWU 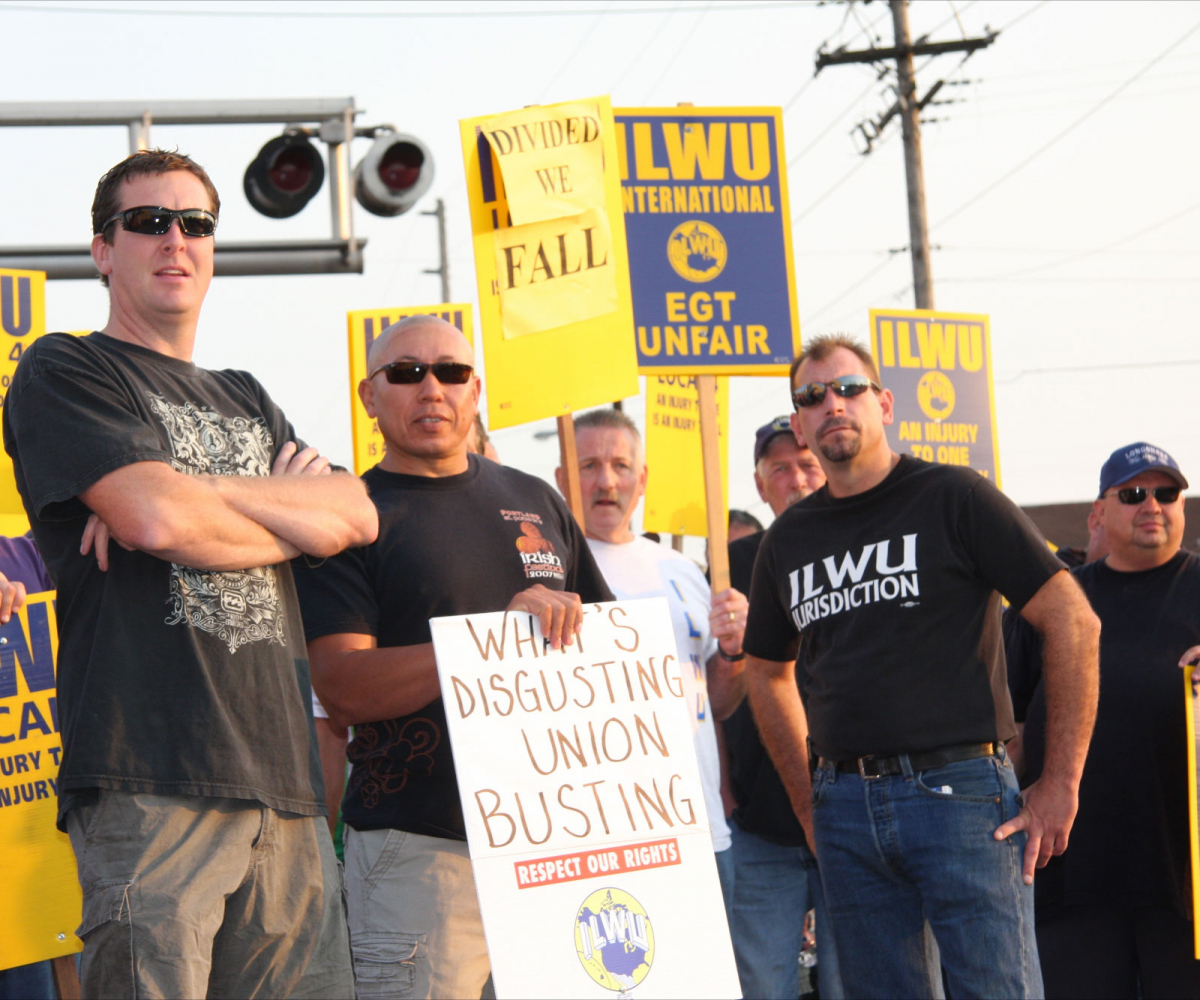 Drawing on the principle that “an injury to one is an injury to all,” ILWU longshore and marine workers have used their port power to support the struggles of other unions. But jurisdictional disputes, most notably a 2011 battle with the Operating Engineers over work at a grain terminal in Longview, Washington, have driven a wedge between the militant union and the AFL-CIO. Photo: Dawn Des Brisay.

As the AFL-CIO prepares for a convention where leaders say the goal is unprecedented solidarity with organizations outside the labor movement, the federation is turning its back on some inside the house of labor. Leaders have ruled that locals of the West Coast Longshore and Warehouse Union (ILWU) cannot seek “solidarity charters” and will be ousted from local and state labor councils. The ILWU international disaffiliated from the AFL-CIO last Friday.

The stance is a departure from the federation’s reactions to previous disaffiliations. After several large unions left the AFL-CIO to create Change to Win in 2005, the AFL-CIO eventually created a mechanism to allow locals to remain affiliated (after initial reluctance). Locals of the departed internationals could take “solidarity charters” and remain part of their local and state labor movements. Later, similar charters were allowed for locals of the giant National Education Association.

Update: Does ILA President Harold Daggett's election as an AFL-CIO vice president September 10 mean he's decided to keep his union in the federation?

On the heels of the West Coast longshore union’s departure from the AFL-CIO, it appears the East Coast dockers may also be headed that way. “We had said for a while, if the ILWU left we probably would too,” said Ken Riley, a national vice president of the International Longshoremen’s Association (ILA), which represents dock workers on the East and Gulf coasts.

Riley said top ILA brass were still wrangling over the move via text messages as of Labor Day but were headed for the AFL-CIO’s convention in Los Angeles next week. Spokesman Jim McNamara said ILA leaders would meet with ILWU (Longshore and Warehouse Union) leaders this weekend, as well as AFL-CIO officials.

“When the announcement was made by [ILWU President] Bob McEllrath is when we learned about it,” McNamara said. “We will be trying to get their reasoning from them.”

Both unions already had one foot out the federation’s door, angered by what they called its inattention to raiding among maritime unions. Last September they, together with three other unions, formed the Maritime Labor Alliance, independent of the AFL-CIO. And in July the ILA quit the AFL-CIO’s Maritime Trades Department.

That AFL-CIO department now includes mostly unions whose primary business is not maritime, such as the Operating Engineers (IUOE), Steelworkers, Electrical Workers (IBEW), and Communications Workers, though it still includes the Seafarers International. The ILWU has accused both the IUOE and the IBEW of muscling in on its territory in the Pacific Northwest.

The ILA charges the IUOE with the same. IUOE members boarded ships in the port of Charleston, South Carolina, to unload military cargo, McNamara said, work that had “been done for decades by ILA members.”

ILWU and IUOE had a highly publicized fight in 2011 over grain-handling jobs in the Northwest that had traditionally been ILWU work—with management bringing in the Engineers in hopes of a substandard contract. The national AFL-CIO refused to take sides, and even forced the Oregon AFL-CIO to rescind a resolution it had passed condemning IUOE’s behavior. The ILWU finally settled for an inferior deal.

Riley said he had been bringing resolutions to conventions for 12 years saying “if we can’t get the AFL-CIO to address raiding we ought to pull out.

“On neither coast were they willing to take any action,” he said, “and now it’s really coming home to roost.”

The move does not mean that the ILA and the ILWU—which have very different traditions—are considering merging, Riley said. But he considers the two unions closer than they’ve been in 30 years. Some ILA locals have been under federal investigation for mob connections, while the ILWU comes out of a militant CIO tradition.

McNamara said about the jurisdictional disputes, “If the ILWU felt they were not getting any relief whatsoever, more of a ‘let it go’ attitude, we would look at that.

“Ever since the formation of Change to Win, with unions leaving and coming back again, every union is asking themselves what are the benefits of being in and out.”

McNamara said any exit would first have to be approved by the ILA’s executive council.

Riley said, “It’s a matter of solidarity. We are two small unions, but because of what we control, we have a lot of power.”

That was then; this is now. Both those initiatives involved large unions. Now the AFL-CIO is faced with the disaffiliation of the much smaller ILWU. Its locals won’t have the option provided to larger, less militant unions, including the Service Employees, United Food and Commercial Workers (now rejoining the AFL-CIO), Carpenters, and Teamsters. Some AFL-CIO leaders have always opposed the solidarity charters, and it appears there is little interest in providing them to ILWU locals.

The AFL-CIO has mandated that all ILWU affiliates be expelled from state and central labor bodies effective the date of ILWU’s national disaffiliation, August 30. Central labor councils and state federations have no choice. ILWU President Bob McEllrath urged members to remain actively involved in local and state labor movements.

The Issue Is Raiding

ILWU locals have been battling other unions, including the 400,000-member Operating Engineers and other building trades unions, over what the ILWU claims as its traditional waterfront jurisdiction. In some instances members of those unions and others have crossed ILWU picket lines.

Most notably, members of an Operating Engineers local took traditional ILWU work during a bitter struggle at a new grain terminal in Longview, Washington. Although state federations in both Oregon and Washington supported the ILWU, the national AFL-CIO insisted it could not take sides, and has resolutely refused to support longshore workers as members from the larger and more politically powerful building trades have ignored ILWU picket lines in subsequent battles with shippers and others.

In more recent jurisdictional conflicts, both local and state labor councils in Oregon and Washington have unsuccessfully attempted to mediate. The ILWU has accused “a law firm with close ties to the federation” of coordinating “multi-state attacks” against it.

Some in the AFL-CIO may feel well rid of a militant affiliate.

Drawing on the principle that “an injury to one is an injury to all,” ILWU longshore and marine workers have used their port power to support the struggles of myriad other unions. In Tacoma, Washington, longshore workers refused to cross picket lines by Earth First! and the IWW in support of striking Steelworkers at Kaiser Aluminum. When Teamster Port of Seattle drivers faced loss of work to non-union drivers in Tacoma, ILWU longshore and warehouse workers in both ports honored Teamster pickets, resulting in return of the work to the union drivers after only one day.

Making use of its strong control of the docks, ILWU members in Seattle a few years back shut down a terminal in response to a picket line from Jobs with Justice, because one container held goods from a struck Teamster warehouse. The offending container was ordered off the dock.

The ILWU has also historically used its power for international solidarity. Before U.S. entry into World War II, longshore refused to load scrap iron for imperial Japan. More recently, ILWU workers have denied labor for goods from apartheid South Africa and the Salvadoran military regime. In 1980, when future South Korean President Kim Dae Jung was imprisoned and in fear for his life, action by the ILWU to raise the specter that South Korean ships would not be unloaded in West Coast ports was credited by Kim with his release.

More recently, dockers have shut West Coast ports to protest the World Trade Organization and the war against Iraq, as well as to celebrate International Workers Day, May 1.

In discussion this week among executive board members of the Martin Luther King, Jr. County Labor Council in Seattle, there was widespread support for offering solidarity charters to ILWU locals, even from some leaders whose locals have had jurisdiction disputes with the ILWU. Members argued for maintaining labor unity.

David Freiboth, executive secretary of Seattle’s labor council and a former national president of the ILWU’s marine division, the Inlandboatmen’s Union of the Pacific, stressed that “Seattle has a long history of solidarity.

“We have had internal challenges to that solidarity in the past,” he said. “This latest stress in the house of labor is something we intend to approach from a principled position of maintaining solidarity on behalf of working people. The ‘solidarity charter’ program gives local labor movements the tools to work with to maintain our unity and our power.”