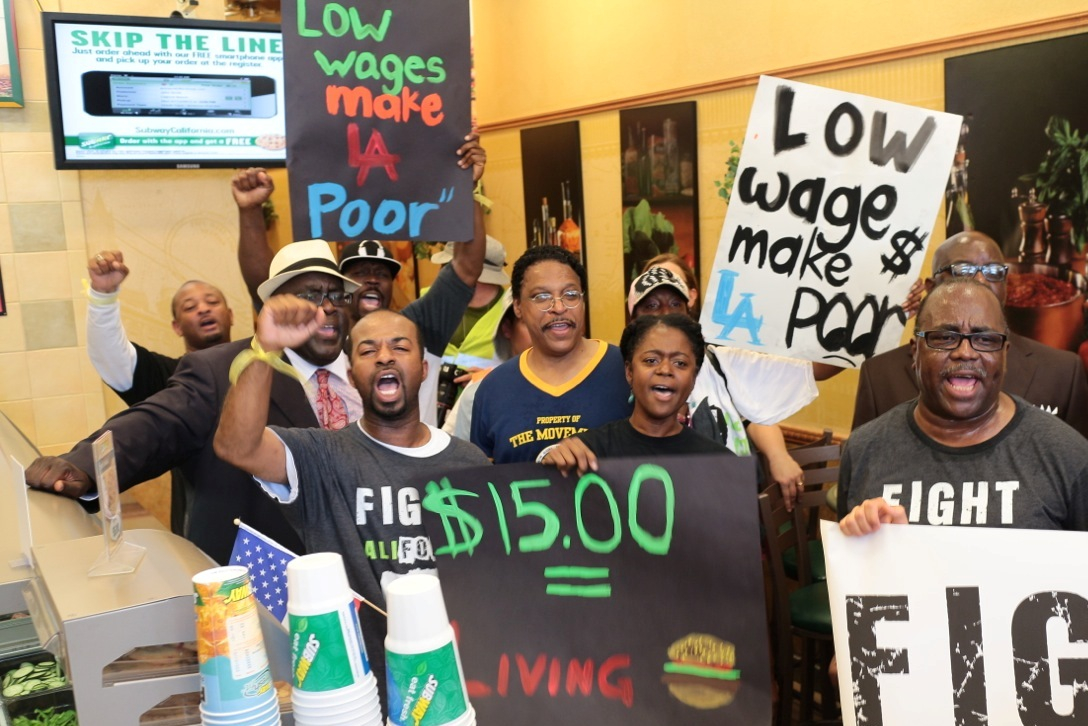 Thousands of fast food workers walked off their jobs in 58 U.S. cities yesterday, an indictment of an economy that’s producing little more than McJobs. Some picket lines turned into temporary occupations, and several stores closed.

From a McDonald’s in Peoria, Illinois, to a Burger King in Durham, North Carolina, the one-day strikes hit businesses in dozens of new cities and towns. Organizers estimated a thousand restaurants were affected.

It was a significant escalation: previous fast food strikes had hit eight cities.

The strikes shut down some restaurants. In others only a few workers walked off the job, leaving managers scrambling to fill shifts. A Jimmy John’s sandwich shop in Seattle was staffed entirely by managers and had to suspend deliveries, while a Burger King in Houston closed for lunch when most of the shift joined the picket line.

In Memphis, 50 workers and supporters picketed a McDonald’s as cars honked and pedestrians shouted their support. “McDonald’s makes $5 billion a year,” said Anthony Cathey, a striker from the store. “They treat us like slaves. We can't make ends meet.”

Another striker, Latoya Jones, said, “I’ve been here almost a year; $7.25 is not a living wage. I’m a single mom with three kids. I’m living paycheck to paycheck.”

In New York, workers picketing a midtown McDonald’s were joined by politicians and sympathetic clergy.

“They’re not letting workers that have been there awhile get enough hours,” striking Bronx worker Bianka Ramirez told the crowd of 300. If corporate managers had to work in her store, she said, “before long I guarantee they’d be asking for $15 and a union.”

Laws on strikes have become so anemic that they provide workers hardly any protection. Only if strikes are primarily to protest a narrow range of “unfair labor practices” does the law protect workers from being “permanently replaced,” a euphemism for fired. (Wage theft doesn’t count as a ULP, and neither does discrimination or sexual harassment.)

The organizers of the strikes for “$15 and a union” have not spent much time emphasizing the ULP angle. An online “how to go on strike” kit includes a letter to the boss explaining that the one-day strike is “to demand a $15 an hour wage, for the right to join a union without intimidation, and to protest interference with our protected workplace rights…” But many signs don’t claim the strikes as ULP-related.

This direct approach has its advantages. For one, it doesn’t muddy the water with labor board jargon that could distract from the main point. Workers know they’re out for more money and a say on the job. And arguably, not much is lost—since the board, at best, takes years to reinstate workers illegally fired.

Instead, the fast food workers have relied on community supporters, including city council members or clergy, to walk them back into their jobs after striking. This approach has had a great deal of success so far in minimizing the risk of getting—or staying—fired. In St. Louis, for example, workers fired for striking were quickly reinstated after community delegations brought pressure.

The crowd briefly occupied the restaurant, then marched downtown to picket another. Strikers from across the city converged at an afternoon rally at Union Square where hundreds of fast food workers were addressed by more politicians and union leaders.

Not all large cities had large strikes. In Los Angeles, a crowd of 300 union members and supporters assembled outside a McDonald’s, but only a few were striking workers. They marched to a Subway and briefly occupied it; managers and employees hid in the back.

In Seattle, by contrast, workers struck around 30 locations, including Jimmy John’s, Subway, and Specialty’s Café and Bakery. A Qdoba Mexican Grill was entirely shut down when a crowd occupied the store. A Subway was unable to stay open because of a large crowd out front.

Striking Seattle workers started the morning fanning out to restaurants to try to convince more co-workers to walk out. They were often successful if they had already discussed the strike. Few to none walked out without earlier discussion, however.

Striking workers are winning the PR war. They shone a spotlight on McDonald’s much-ridiculed budgeting tool—the second line of which assumed the worker they were “helping” with their budget had a second job.

When confronted about its low wages, McDonald’s blames franchise owners. But when asked about the roughly 20 percent of stores it runs directly, company flacks acknowledge workers there also start at minimum wage.

Fast food companies have also claimed stores provide a ladder to managerial jobs or franchise ownership—but workers say promises of advancement are so much smoke.

John Valdez, who walked out of a McDonald’s in midtown Manhattan, said he has now worked for three McDonald’s locations over four years, and knows all the jobs. He worked his way up from $7.25 to $7.55 an hour—but when he changed stores, they bumped him back down to $7.25 again. “It’s not fair, that’s why everybody’s here today,” he said.

And there’s hardly any room at the top of the ladder. Only 2.2 percent of jobs in fast food are professional or managerial, said a recent report by the National Employment Law Project, “Going Nowhere Fast.” Front-line occupations like cooks, cashiers, and delivery drivers make up 89.1 percent of fast food jobs, with a median hourly pay of $8.94. Their supervisors make $13.06 per hour, but only comprise 8.7 percent of fast food jobs. And franchise owners have to prove assets of three quarters of a million dollars in most cases, the report said—so working your way up to ownership, on minimum wage, doesn’t sound realistic.

Burger King striker Tamara Green, in her 30s, said she’s close to finishing her college degree—but she knows, as good jobs are destroyed, a degree is not the ticket it once was. “I have college grads standing next to me and making a burger,” she told the New York crowd.

The Service Employees have been backing the effort, starting with 40 organizers in New York, the first city to hold fast food strikes, last July.

The union at first kept a low profile, but in recent weeks, as interest spread nationally, union officials started taking credit for the effort. There are signs SEIU is putting substantial resources, with as many as 10 full-time organizers each in several cities, and they recently announced they’re hiring researchers for the campaign.

In Memphis the union recruited fast food workers through a social media ad campaign, following up with a live organizer, which led to the first participation in fast food strikes there.

The city is iconic for the sanitation workers’ strike that drew Dr. Martin Luther King, Jr.’s support right before his assassination. Labor history was alive and being created anew on Thursday. Some Memphis workers held signs reading “I Am a Man.”

The strikers ended their march at the civil rights museum, at the site of the Lorraine Motel where King was killed. To get there, they marched up Beale Street, following the same route sanitation workers often marched in 1968.

The short strikes don’t seem to be aimed at stopping production and costing the companies money, although they certainly have done that in some stores. Instead, the main targets are high-profile brands and low minimum wage laws.

They do seem to have revived a discussion of low wages and high corporate profits, reminiscent of the talk spurred by Occupy Wall Street.

The path forward is unclear. Squeezing more out of franchise owners makes little sense when McDonald’s, for example, rakes in much of its profit through fees and mandatory sales to franchisees.

A possible model comes from farmworker organizing. Both the Farm Labor Organizing Committee and the Coalition of Immokalee Workers have conducted multi-year campaigns to eventually win three-party agreements among farmworkers, growers, and produce buyers. CIW, in particular, has extracted money for tomato pickers directly from fast food companies like Yum Brands, which owns Taco Bell. They did it by public criticism and boycotts of the carefully-cultivated fast-food brand names, including McDonald’s, Burger King, Subway and Chipotle.

SEIU seems more focused on the political arena. In a planning meeting for the strike in Seattle, the only thing on the calendar after the strike was the city’s mayoral election.

Quinn said she would introduce city council legislation to force fast food companies to provide workers with fixed schedules and notice of changes at least a week in advance. Workers say they are unable to go to school, arrange childcare, or plan their lives because they don’t have set shifts. “Every week my schedule changes,” said Valdez. He is often sent home early, he said, or called when staffing is short.

But Quinn’s record, blocking and then watering down New York City living wage legislation indicates that such election-time promises will dissipate quickly.

Nationally, SEIU President Mary Kay Henry seemed to focus on building momentum for a higher federal minimum wage. She told The New York Times that the demand “is moving people to understand that $15 is increasingly reasonable.” President Barack Obama has proposed a federal minimum that would gradually increase to $9 an hour, but Congress has not moved on it.

“$7.25 isn’t enough, I can promise you that,” said Shakira Campbell, a New York McDonald’s worker. “I need my money. Where is my money?”

With reporting from Steven Payne in Memphis, Josh Sturman in Seattle, and Slobodan Dimitrov in Los Angeles.