We're Taxing the Rich... and So Can You 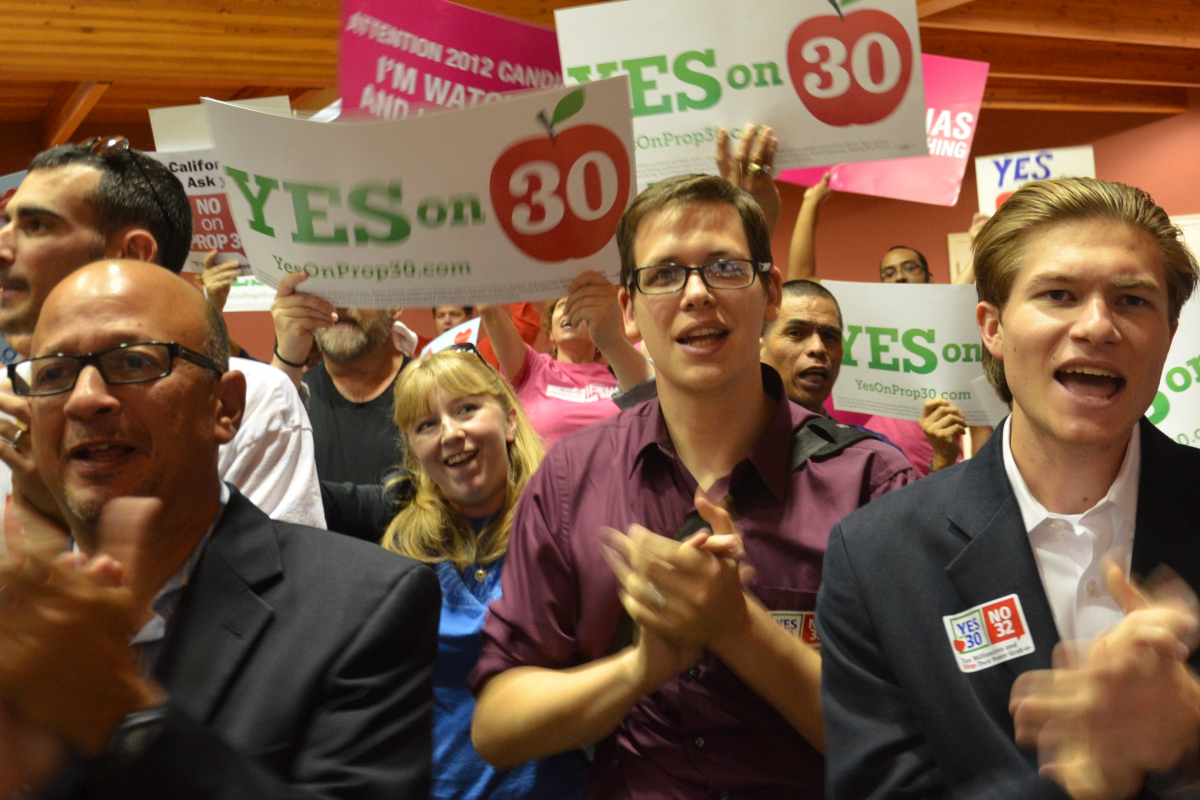 The Yes on 30 campaign won higher taxes for rich Californians, winning 55 percent to 45 percent. Even though polling showed that people were willing to vote for higher taxes on the rich, the governor kept talking about "shared sacrifice." Photo: Steve Rhodes.

“There is no alternative to austerity,” insist the rich, along with their politicians, foundations, think tanks, and media.

They’ve been saying it for decades. “Taxes are bad,” they also claim. “Government doesn’t work. And public employees are greedy.”

Consequently, common wisdom had it that “you can’t raise taxes.” Even people who should have known better believed this—while the public sector slid down the tubes.

So how did Proposition 30 succeed? This measure, passed by voters last November, raises $6 billion a year for schools and services—in California, a supposedly “anti-tax” state. The money comes mostly through an income tax hike on rich people, along with a tiny sales tax increase of ¼ percent.

The story should be better known, because with the right preparation, you could make it happen in your state, too.

Shortly after Democrat Jerry Brown was elected governor in November 2010, the California Federation of Teachers (CFT) pulled together labor and community groups to craft a ballot measure to raise the revenue needed to keep schools and services afloat.

For two years we had been laying the groundwork for a progressive tax: creating educational materials, publishing opinion pieces, holding training sessions with our members and other unionists, and talking with potential coalition partners.

We funded polls and focus groups, testing how likely various types of taxes would be to gain a majority.

The public believed, however, that the rich and large corporations needed to pay their fair share for the common good. They were quite willing to vote for higher taxes on the rich.

As we refined our research, we decided on three principles: bring in the most revenue possible; draw it from those who could most afford to pay; and have the best chance of winning. We arrived at a Millionaires Tax: people who made a million dollars a year would pay an extra 3 percent, and people making $2 million an extra 5 percent, raising $5 billion a year.

Unfortunately, Governor Brown had his own proposal that didn’t follow those principles—it included both a half-cent sales tax hike and an across-the-board income tax increase. People were out gathering signatures for Brown’s initiative, our Millionaires Tax, and a third tax measure sponsored by a wealthy liberal attorney.

The Millionaires Tax ran ahead of the other measures in five straight polls.

In early March 2012, the CFT helped organize a march in the capital against budget cuts and college tuition increases. Thousands of students, faculty, and others paraded Millionaires Tax signs outside the governor’s window.

Two days later, responding to the governor’s charge that three competing measures would all lose, we released the results of a poll testing that idea. It found the others would get less than 50 percent, and the Millionaires Tax would win handily.

At that point the governor called in CFT President Joshua Pechthalt to talk. We compromised and combined the two proposals into Prop 30. The new measure raised the top tax rates on income of $250,000 by 1 percent, on $300,000 by 2 percent, and on $500,000 by 3 percent. We had wanted a permanent tax; Brown’s was for five years. The compromise extended that to seven.

We knew the sales tax was a poison pill and we requested that Brown drop it entirely, but he explained that, to keep the Chamber of Commerce neutral, he had promised not to “demonize the rich,” meaning there had to be a “shared sacrifice” component. He did agree to reduce it to a quarter cent.

Our research was validated during the campaign—people don’t like regressive taxes like the sales tax. Millions of dollars in opposition ads did their best to confuse the voters, calling Prop 30 “a massive tax increase on everyone.”

CFT’s coalition, Reclaiming California’s Future, included the Alliance of Californians for Community Empowerment (which emerged after ACORN’s demise), Courage Campaign, and California Calls, a coalition of community groups dedicated to reforming the tax system through voter education and expanding the electorate.

Our coalition emphasized the “tax the rich” message in our literature, public events, and door-to-door canvassing, but we were only part of a much broader Prop 30 coalition. The official campaign’s TV ads included asking the wealthy to pay their fair share, but as one message buried among others.

The polling numbers gradually sank to a bare 50 percent. One poll, three weeks before the election, had Yes on Prop 30 at just 48 percent; the No’s had crept up to 44 percent.

The governor campaigned mostly on the idea that Prop 30 would save education from further cuts, but threw in “shared sacrifice” and “paying down the state’s wall of debt” in his public pronouncements.

We agreed with the education message, disagreed with the others, and insisted on a strong emphasis on taxing the rich. We stressed to the governor that, in order to neutralize the opposition’s ads, the public had to understand what services the tax paid for, who it taxed, and by how much.

In the final weeks, as the governor worked with CFT and other allies in rallies and media appearances, his message became clearer and more consistent: Prop 30 would stop cuts to schools and was fair, because, he said (drawing on his Jesuit background and citing St. Luke), it asked “those who are blessed with the most wealth to give back a little bit so everyone could benefit.”

Ninety percent of Prop 30’s revenues would come from taxing the wealthy; and the quarter-cent sales tax, he said, amounted to a “mere penny on a $4 sandwich.”

On Election Day, Prop 30 won 55 percent to 45 percent, reshaping the decades-old understanding of California as an “anti-tax” state. It is the single largest progressive tax passed in the state since World War II, both in the amount of revenue raised and as a percent bump on the income taxes of the wealthy.

What are some lessons from this tremendous victory?

If the word can be gotten out effectively, the electorate is ready to pass progressive taxes to pay for common needs like schools and services.

Demographic changes favoring a clear progressive message, coupled with the Occupy movement’s lasting insight that the 1 percent are robbing the rest of us blind, provide the opening to beat back the core conservative idea: that the problem is government and society should seek help from the wisdom of the rich.

Prop 30’s message was that public education is the foundation of a decent society and we can restore that promise if the rich pay their fair share of taxes.

The anti-Prop 30 messages were the same as always—government can’t do anything right; the rich will leave California if we tax them; taxes are too high; if we remove the waste, fraud, and abuse in government there will be plenty of money for schools.

But these ideas, so effective in the past, had lost their potency, because, especially post-Occupy, the public understands that economic inequality is growing.

Spending tens of millions of dollars didn’t work for the rich this time. In fact, it backfired—they proved our point. We didn’t have to “demonize” the rich; they did it themselves.

Another key, of course, was the old-fashioned work of reaching out to core constituencies. The Reclaiming coalition was crucial, along with a ground campaign by the broader labor movement, which was heavily mobilized to fight an anti-union measure on the ballot (which lost).

Volunteers and staff spent countless hours knocking on doors, phonebanking, rallying, educating. We reached out systematically to less-likely voters—young people, college students, immigrants, lower-income communities of color—and convinced them to come out to vote for their own futures.

Credit for this orientation is due especially to California Calls, which has targeted less-likely voters and stayed in touch over several election cycles.

This year California has begun to restore funds for public education for the first time in years. There is an alternative to austerity; its name is “progressive taxes.”

A version of this article appeared in Labor Notes #412, July 2013. Don't miss an issue, subscribe today.
Related
Who Holds the Power in Joe Biden’s White House? »
Will the Stimulus Stop States From Slashing More Jobs? »
Why Did California's Tax the Rich Measure Lose? »
Ballot Measures: Mixed Results for Workers »
Soak the Rich, Now More Than Ever »